When Monster Hunter Stories 2 was first announced, I ignored it. The original had no appeal to me whatsoever. I actually felt bad when a friend tried to tell me how excited she was about it. Then came the announcement of multiplayer, and I thought, “Well, I should at least give it a look,” as I know MH series fans with kids and it sounded like a nice way to introduce them to the series.

After some playtime with the demo, I can now see myself doing the same for friends who are more into turn-based games than action-based ones. The story so far may actually be more engaging than core MH titles and could be a nice stepping stone for Pokemon fans looking for something new. The only issue, however, is that the current demo ends before proper multiplayer content can be accessed, and a recent official video showing off the feature noted that multiplayer will sometimes require some kind of consumable to activate, which seems to go against the spirit of the series.

When we asked Capcom’s PR about the expedition tickets and what they mean for multiplayer, we were told, “While expeditions (like the one shown in the co-op gameplay video) require tickets, there are other multiplayer modes that do not require tickets.” As we’ve had no hands-on time with the finished product, it’s hard to say whether the title may be good for online multiplayer fans as opposed to just MH series fans.

What we do know, however, is that the game’s roadmap already shows that Capcom expects completionists to participate in multiplayer missions, as several content updates are specifically for co-op missions. The game is set to release on PC and Nintendo Switch on July 9th, but without crossplay. Switch owners, however, will have both online and local multiplayer options. While PC fans have to wait until release for the demo (which is the first few missions of the full game, with data carrying over to the final product), Switch fans can at least get a feel for the single-player aspect, which actually hints a bit about multiplayer. 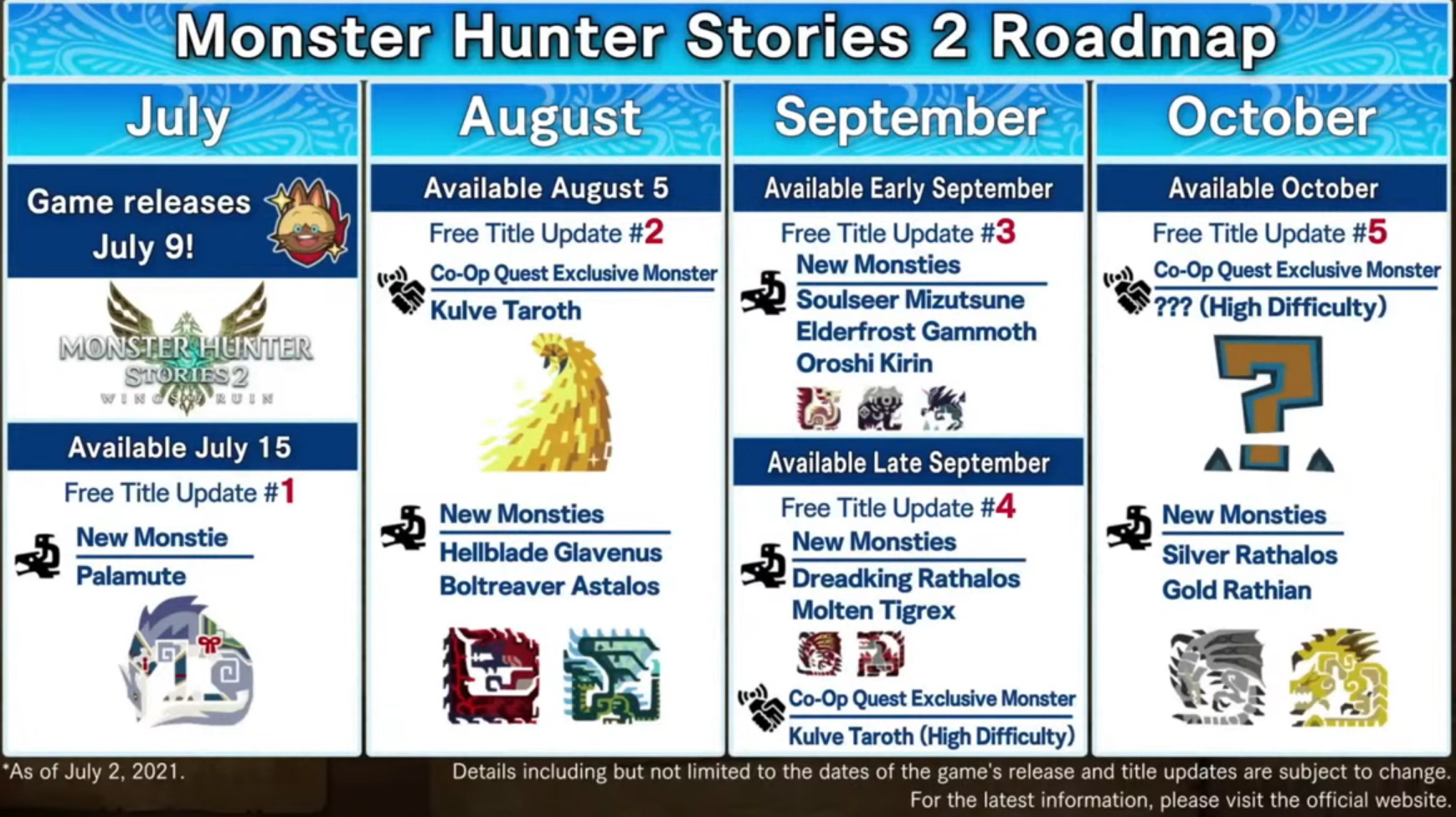 So far, it’s easy to recommend the game to MH series fans, especially major fans of the monsters and fans looking to convert friends. The monsters get a bit of a Pokemon treatment without losing their MH flair. You’re still chopping tails and smashing faces, but with turn-based attacks, and the chopping’s not shown graphically, just announced as a “part break.”

To do this, you’ll want to figure out whether a monster is going to use a power, technical, or speed attack, select the part you want to attack (when possible), and use the corresponding weakness which comes prior in the aforementioned list displayed as a wheel. For example, a tricky poison using monster like Pukei-Pukei is a technical monster, so you’ll want to use a power attack. However, when it begins to eat food, it’s going into power attack mode, so you’ll want to use a speed attack. It’s reasonably intuitive and interesting enough to make sure you don’t totally slack off.

Monsters retain a lot of their weaknesses and strengths from the main series too, but weapons are limited to great swords plus sword and shield for slashing damage, hammers and hunting horns for blunt damage, and bows and gunlances for piercing damage. While this really narrows down the options we have in the main series (RIP my Switch Axe story dreams), it also gives dedicated weapon users like yours truly an excuse to try something we wouldn’t normally use in the main series.

Much as in the main series, you’re still going out to hunt monsters to make equipment with various parts, but now you’re also stealing eggs to raise monsters for yourself. It’s like a more brutally honest pokemon, though the series does address the idea that these are, well, monsters, and as such they present a very real danger to humans. It’s made the plot thus far feel a bit Ghibli-esque, as I don’t feel there’s a true “bad guy” yet, just different people with their own perspectives and agendas.

One of the main issues, however, is that gathering seems to require some knowledge of the main MH series. My MHR hunting partner and I were surprised that gatherable items aren’t highlighted or visually distinct from the rest of the environment. A player who isn’t familiar with the series may not think to approach a butterfly or spiderweb to collect it. This kind of knowledge gives vets a small advantage, though I’m sure newcomers will eeventually figure this out.

Of course, the other issue is multiplayer. Monster Hunter has always been about multiplayer, which was why the 1v1 battle-only multiplayer in the original Stories game never appealed to me (though it’s supposedly set to make a return in MHS2). It’s nice that MHS has already added co-op, but whether this will be limited to standalone missions or if it’ll apply to main story play is something that remains a mystery. The latter would be fantastic and hopefully pressure The Pokemon Company into producing a game that opens their worlds up beyond having each player set up as “the best” when they really might not be. 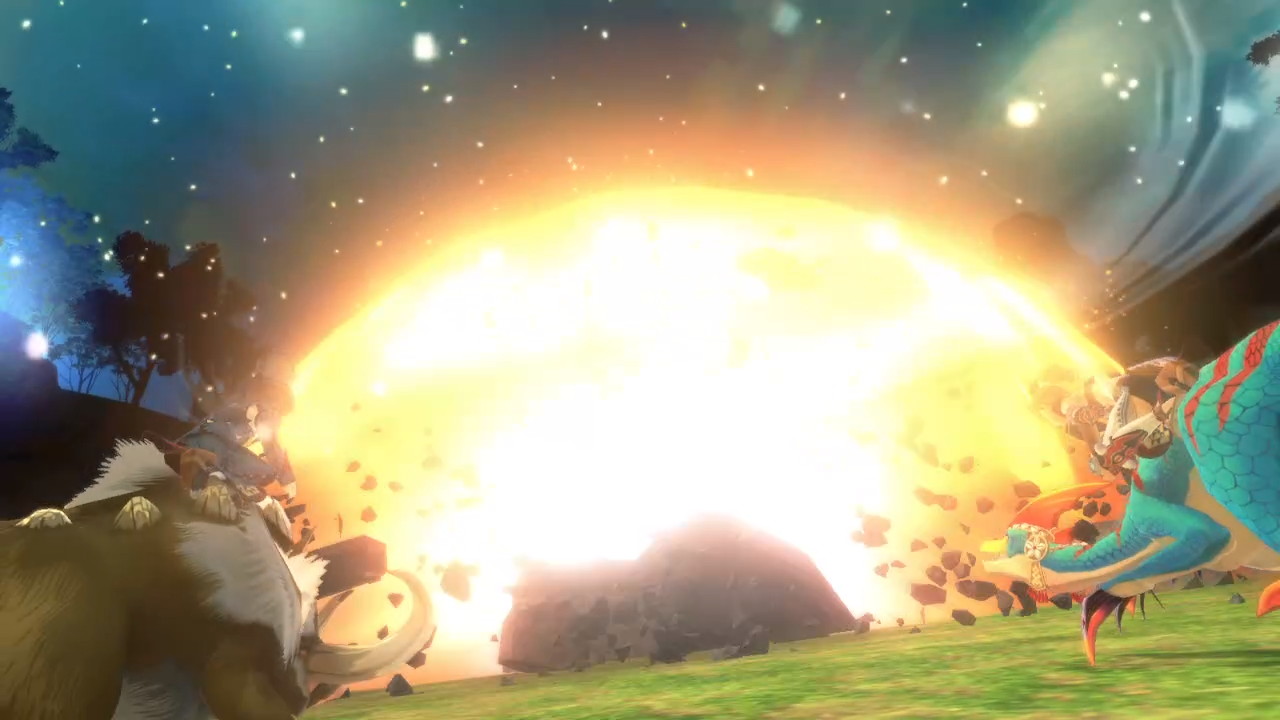 Again, we don’t get actual multiplayer in this demo, but players soon get Kayna, an older villager who pairs up with them for various missions. Through her, we see Double Kinship Skills. Regular Kinship skills are a kind of Ultimate attack between you and your “monstie” (think Pokemon), allowing you to mount up and attack together. Double Kinship Skills are basically dual attacks between two hunters. When used with a living player, these attacks should be easier to coordinate and unleash devastating attacks on enemies.

The only issue is the difficulty – or lack thereof. The demo is rather simple thus far. My hunter partner and I often don’t use antidotes to cure poisons as they feel negligible. As in many games that have levels, it feels quite easy to outlevel your current content. The demo also seems void of high-end monsties, as the eggs you can get can have lots of slots for skill (which you can tell by getting the stinkiest eggs), but not the best traits (determined by having a heavier egg). Depending on how things scale, the game could potentially get even easier, meaning Capcom needs to either tune content much differently for mutliplayer so as to actually provide space just to make use of basic multiplayer features, or perhaps the whole game’s challenge will open up after the demo.

From the Capcom video, we know that players in groups can choose to engage against mobs 1v1, but others can join in, even after the battle has already started. That means you can get the egg you want, and if your friend accidentally wakes up the monster while searching for one that suits them, you can jump in before it attacks your friend. It also means, however, your friend can then ditch you and take their egg to end the mission.

The “problem” in my mind is that it seems multiplayer will be instanced, rather than having someone join your in your game’s overworld. The game has small, random dungeons to explore of random difficulties and layouts. Hunting for eggs and immediately having an idea of the monstie’s value is pretty fun and arguably feels more interactive than catching a bunch of random pokemon and hoping they have good stats, but limiting multiplayer only to dungeons is still disappointing. Admittedly, MHS2 isn’t an MMO and likely isn’t designed to host worlds where people can progress through what seems like a fairly linear story with a singular hero, but that’s why we play MMOs and not just single-player games.

At any rate, Monster Hunter Stories 2’s demo is enjoyable enough, especially for fans of the series who want something that requires less twitch skills and more hoarding, but its multiplayer features are still very much a mystery.