It’s showtime for Path of Exile: Grinding Gear Games is finally taking the wraps of its next expansion. Not a whole lot is public right now, apart from the date – it’s launching July 23 on PC and July 28 on console – and the extremely brief teaser video. 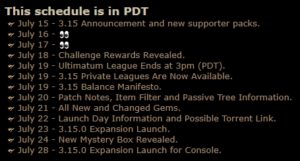 “Exact details of our upcoming expansion will drop at the end of this week!” Grinding Gear tweeted earlier this week in a message that set the community buzzing. “While we haven’t provided many hints yet, you should know that this expansion shakes up Path of Exile’s metagame in a big way.”

We’ll have a recap after the show, but in the meantime, you can watch it here beginning at 4 p.m. EDT.

Update: GGG just announced that the expansion’s called Expedition! Ahead of the reveal, MOP’s MJ got a sneak peek at everything… we’ll be tucking her pieces right here:

Path of Exile’s Expedition league sets off next week
Advertisement