It’s been a helluva Tuesday in the swamps of the Activision-Blizzard sexism scandal: The day opened with the departure of J. Allen Brack from Blizzard and closed with the Activision-Blizzard Q2 2021 investor call, which showed Activision revenues up but Blizzard revenues and monthly active users down, in spite of the release of WoW Classic’s Burning Crusade expansion and the World of Warcraft 9.1 patch during the quarter.

But of course, the bad news just keeps rolling, and we’ve got a few more updates this evening.

First, Bloomberg broke the news that Brack isn’t the only one departing; Jesse Meschuk, the former head of human resources at Blizzard, is also out. “Jesse Meschuk is no longer with the company,” was apparently the extent of Blizzard’s comment on the topic. Axios notes that Meschuk has been with the company since 2009 but hadn’t been head of PR since January; the site also chronicles cases from several Blizzard employees who say they took their complaints about harassment and even assault directly to the HR team and were all but ignored. Employees describe a “surprising lack of paper trail” when it came to reports, a lack of privacy in reporting, and a distressingly high turnover rate in the HR department.

And second, an Activision-Blizzard shareholder has begun a class-action lawsuit alleging that the company had been misleading investors ahead of the California sexism lawsuit. Gary Cheng asserts that Activision-Blizzard knew about and failed to fully disclose the DFEH investigation and the allegations and effectively did damage to investors as the company’s stock fell.

“The statements contained in 16-30 were materially false and/or misleading because they misrepresented and failed to disclose the following adverse facts pertaining to the Company’s business, operations and prospects, which were known to Defendants or recklessly disregarded by them. Specifically, Defendants made false and/or misleading statements and/or failed to disclose that: (1) Activision Blizzard discriminated against women and minority employees; (2) Activision Blizzard fostered a pervasive “frat boy” workplace culture that continues to thrive; (3) numerous complaints about unlawful harassment, discrimination, and retaliation were made to human resources (“HR”) personnel and executives which went unaddressed; (4) the pervasive culture of harassment, discrimination, and retaliation would result in serious impairments to Activision Blizzard’s operations; (5) as a result as a result of the foregoing, the Company was at greater risk of regulatory and legal scrutiny and enforcement, including that which would have a material adverse effect; (6) Activision Blizzard failed to inform shareholders that the California Department of Fair Employment and Housing (“DFEH”) had been investigating Activision Blizzard for harassment and discrimination; and (7) as a result, Defendants’ statements about Activision Blizzard’s business, operations, and prospects, were materially false and misleading and/or lacked a reasonable basis at all relevant times.”

The shareholder seeks a jury trial and damages. As we type this, ATVI’s stock is down 14% over the last six months, with the most significant drop coming in the last few weeks, though of course it’s perking back up after close on the news that Activision-Blizzard saw a large revenue jump in the second quarter. 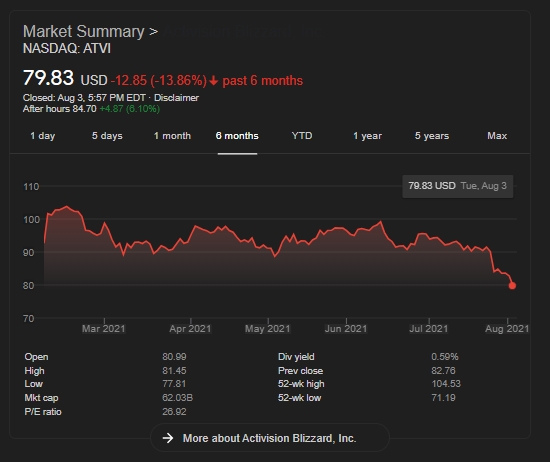 “Our goal is for the executive leadership team to address their response to the California DFEH lawsuit, acknowledge the reality of working conditions across our organization, and commit to meaningful change at Activision Blizzard,” they write, reiterating their four demands: an end for forced arbitration, inclusive hiring and recruitment, pay transparency, and a legitimately third-party audit. While Activision CEO Bobby Kotick had announced that law firm WilmerHale would review the company’s policies, the worker group has rejected it on multiple grounds: that the firm has pre-existing relationships with the company and therefore isn’t a neutral third party; that the firm has a well-earned reputation as a union-buster that makes it presence disingenuous; and that the lead partner from the firm specializes in corporate defense – “protecting the wealthy and powerful” – rather than employees.

“We call on you and your executive leadership team to do better, and to fully address our list of demands. We will not abandon our cause. Our ranks continue to grow across multiple Activision Blizzard studios.”

If you want a full recap of the Blizzard situation from the last two weeks, we’ve got one in the financial report from earlier today, or you can check out all of our coverage so far piece by piece: