You know what the problem is with Trove in the beginning? It just throws so much stuff at you that when you do something else that feels slow by comparison, it feels… well, boring if I’m perfectly frank.

That was the problem I ran in to when I started out this week’s adventure, hopping into the game’s Geode content as suggested by the votes. By all accounts, this seems like a neat little addition to the game’s overall beat: You head to a different location, you have some totally different experiences while you’re there, and it appears, at least at first blush, a generally more toned down and chill sort of thing.

But I don’t want toned down or chill. I want to be blasted in the face by a bunch of colors like a greyscaled adult being blown away by the sight of some product like in a ’90s advertisement. And Geode is just way too chill for me. 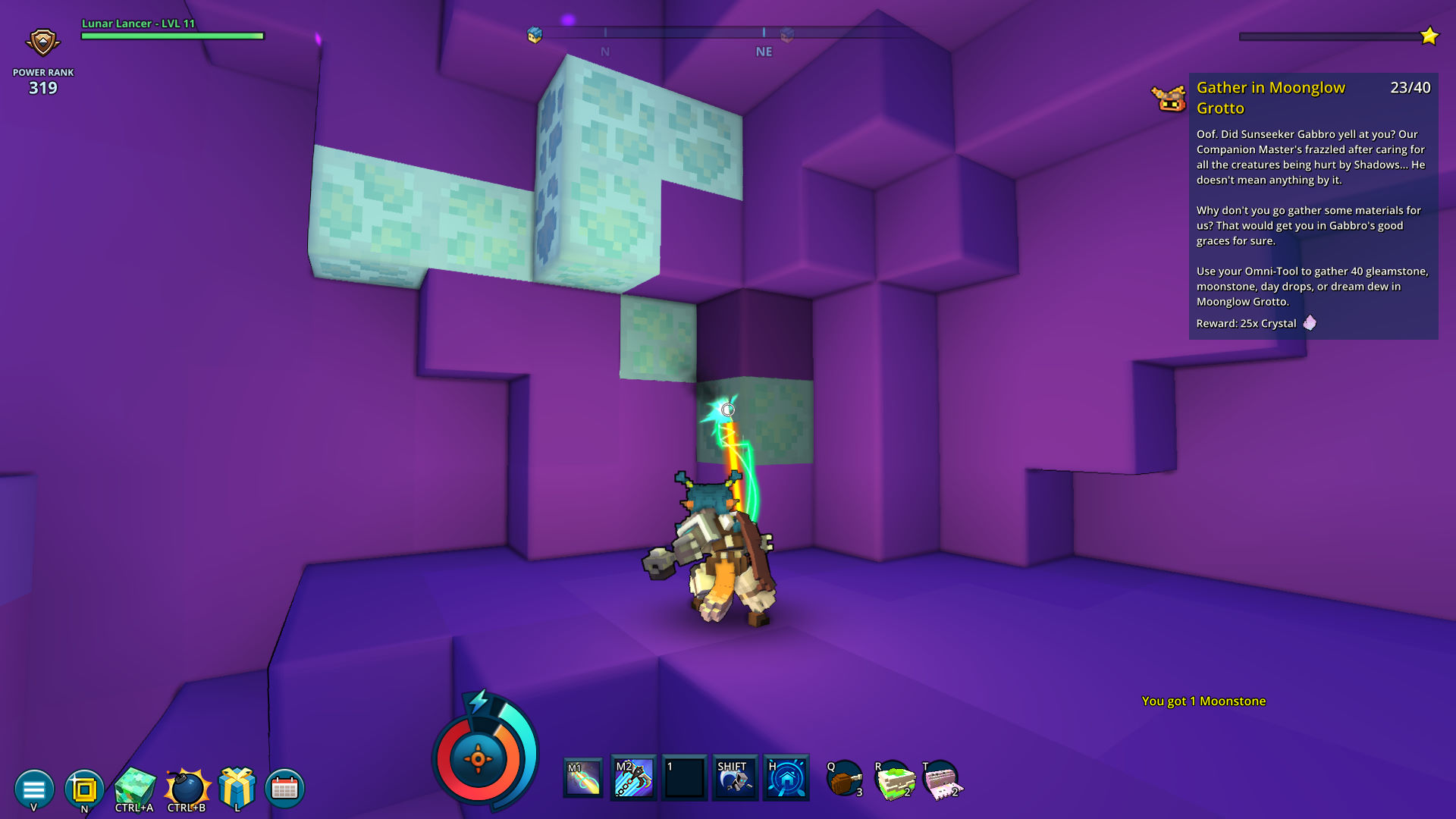 The point of Geode, as far as I can gather, is running through different one of three different cavernous zones, hoovering up materials like crystals and ores, and helping denizens that are sometimes found in the caves by literally chucking food or a blanket at them as fast as you possibly can before the energy of your “suit” is tapped and you’re flung back to Geode’s central hub. Materials are used in a variety of crafts, and there’s a whole Reliquary thing going on where doing stuff in Geode charges them up enough that they can be placed in an incubator thing for a set length of time to open up and reveal their goodies.

I’m not really sure whom this was made for, to be perfectly honest. Perhaps I’m missing some sort of beat here, or maybe I didn’t really dive into the whole thing long enough to unearth more about it, but I don’t really play Trove to run through caves, looking around for crystals or colored blocks to zap for goodies. I mean, it’s been impressed upon me that gathering ores and materials is important, but to this point I haven’t really bothered to explore that part of the game yet and I can’t be bothered to try.

Or maybe I’m going at Geode all wrong. Maybe I wasn’t moving fast enough. Maybe I wasn’t meant to curve into every little hill and valley and look around. Maybe I’m meant to fall to the lowest floors possible until I see new and neat stuff. That’s perhaps the way this is meant to be experienced and if that is the case, do please let me know in the comments. For the time being, however, I’m perfectly happy just leaving Geode on the back burner for now. 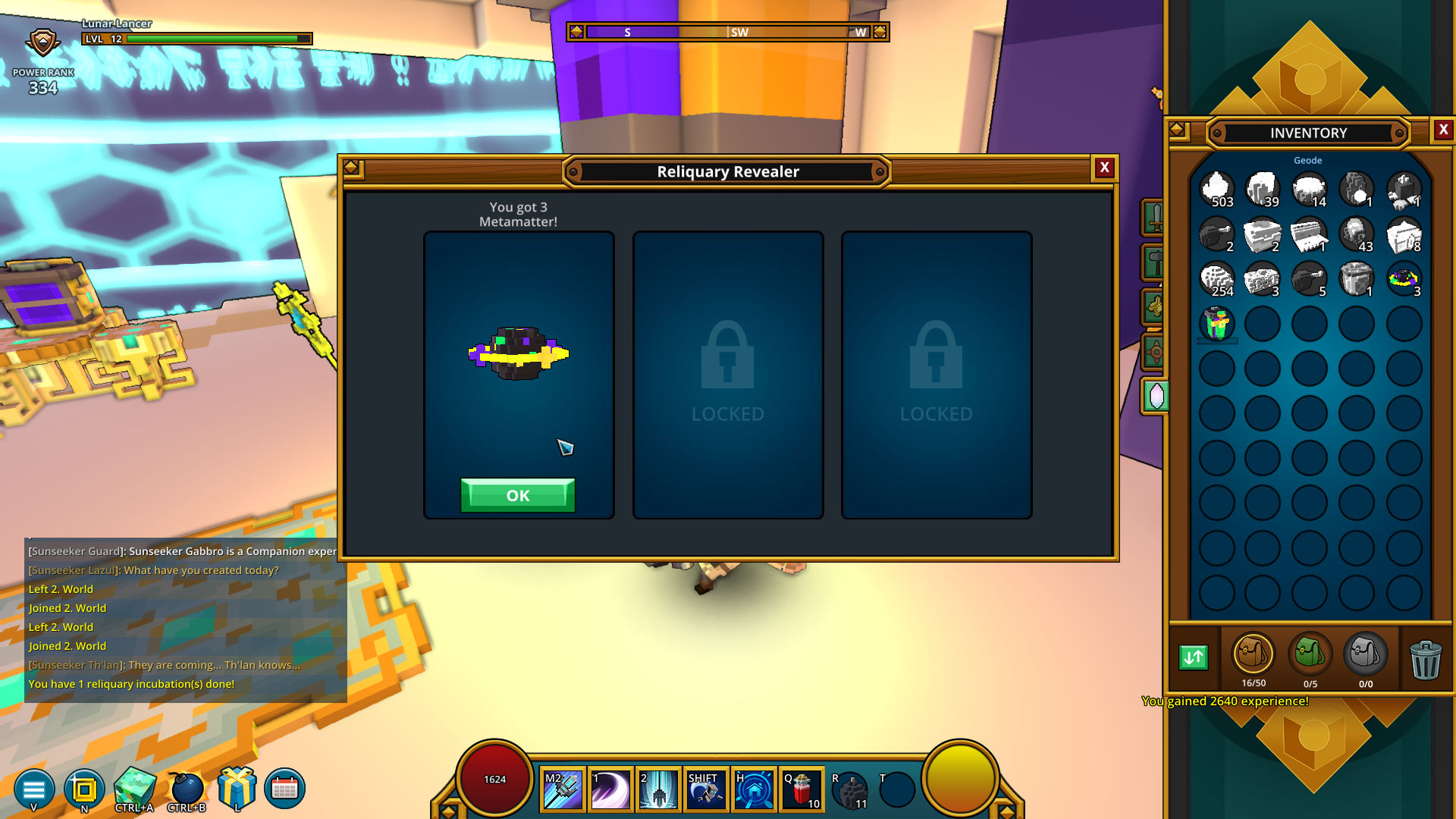 Since Geode ended up not granting me any delight like I’d experienced last week, I figured a little rapid-fire change of pace would be in order, which led me to the second poll answer: trialing different classes. This system, frankly, is a masterstroke, especially for those who are seeking to craft or buy a new class to play. The trail in question only really lets you get to level 4 at speed, but even at that low level you get the sense of what each of the different classes is capable of. It’s enough of a demo to get the point, but also just short enough to leave you wanting more. And friends, I definitely am wanting more.

The classes I elected to trial were the ice Sage, the Revenant, the Dino Tamer, the Neon Ninja, and the Fae Trickster. Each one in turn brought a unique angle to wandering the world and fighting enemies, though some were more interesting than others. The Ice Sage and Dino Tamer, for example, weren’t quite as enjoyable as I had supposed, but the Revenant, Neon Ninja, and Fae Trickster ended up being awesome.

The Revenant, first off, is probably one of the more fun and interesting tank classed I’d ever seen. The whole class basically feels like its meant to balance health drain for ability use with health regen for hitting enemies, which keeps things on just enough of a knife’s edge to be enthralling without feeling like a chore. On top of that, this classes attacks work in cones, meaning waves of enemies all ganging up together — a problem for some classes — ends up being the intended way to fight with the Revenant. 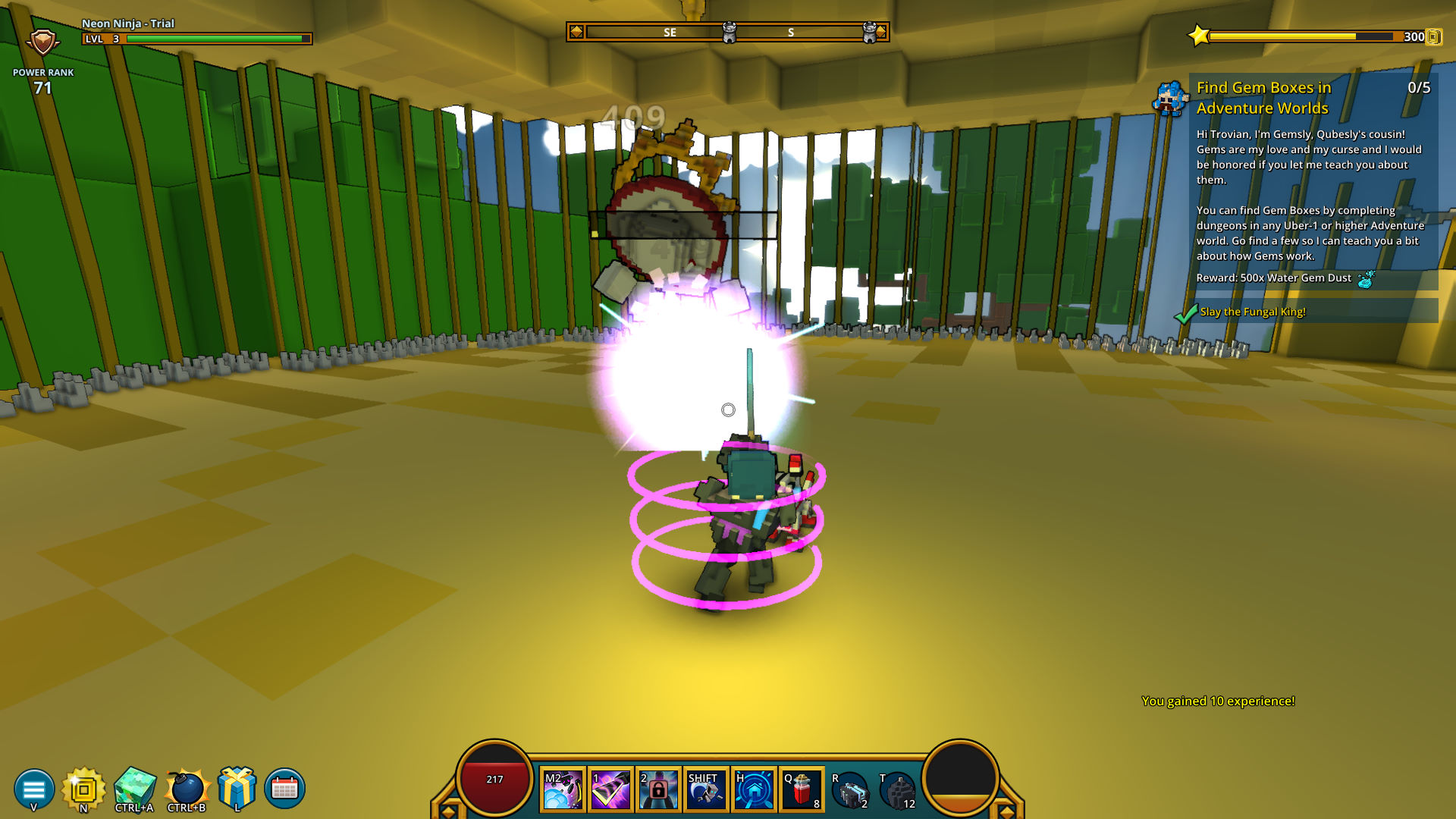 The Neon Ninja and the Fae Trickster, however, work in semi-similar ways but with different twists. The Neon Ninja seems to be focused on building up enough of a resource, dashing through enemies to lock them down, then going into stealth to use those resources on big damage. The Fae Trickster, meanwhile, is about putting down a copy of yourself to divert enemies and shoot them from a distance, with damage increasing so long as you’re not hit. Both are basically tricky and fascinating DPS classes that I had a lot of fun using. It all basically made entering the Medieval World over and over more interesting than it should have been.

So, with this all outlined, it’s time for this week’s polls, and I’ll be honest, they basically ask about the same question as last week. First, I have been so enamored with the other classes I trialed and enjoyed that I’m willing to roll them instead. Or I can stick it out with the Lunar Lancer (which is just level 11, I should point out) and get on with the rest of the game. So help me settle my indecision.

Which class should I roll in Trove (for reals this time)?

The other poll is, effectively, a twist on the other poll I had in regards to content focus. As I mentioned earlier, I’ll leave Geode behind through the rest of this playthrough bar any advice from the comments that affirms that I was doing the content completely wrong or should otherwise stick it out. So, let’s get to that next bit, shall we?

What should be the next content I should try? 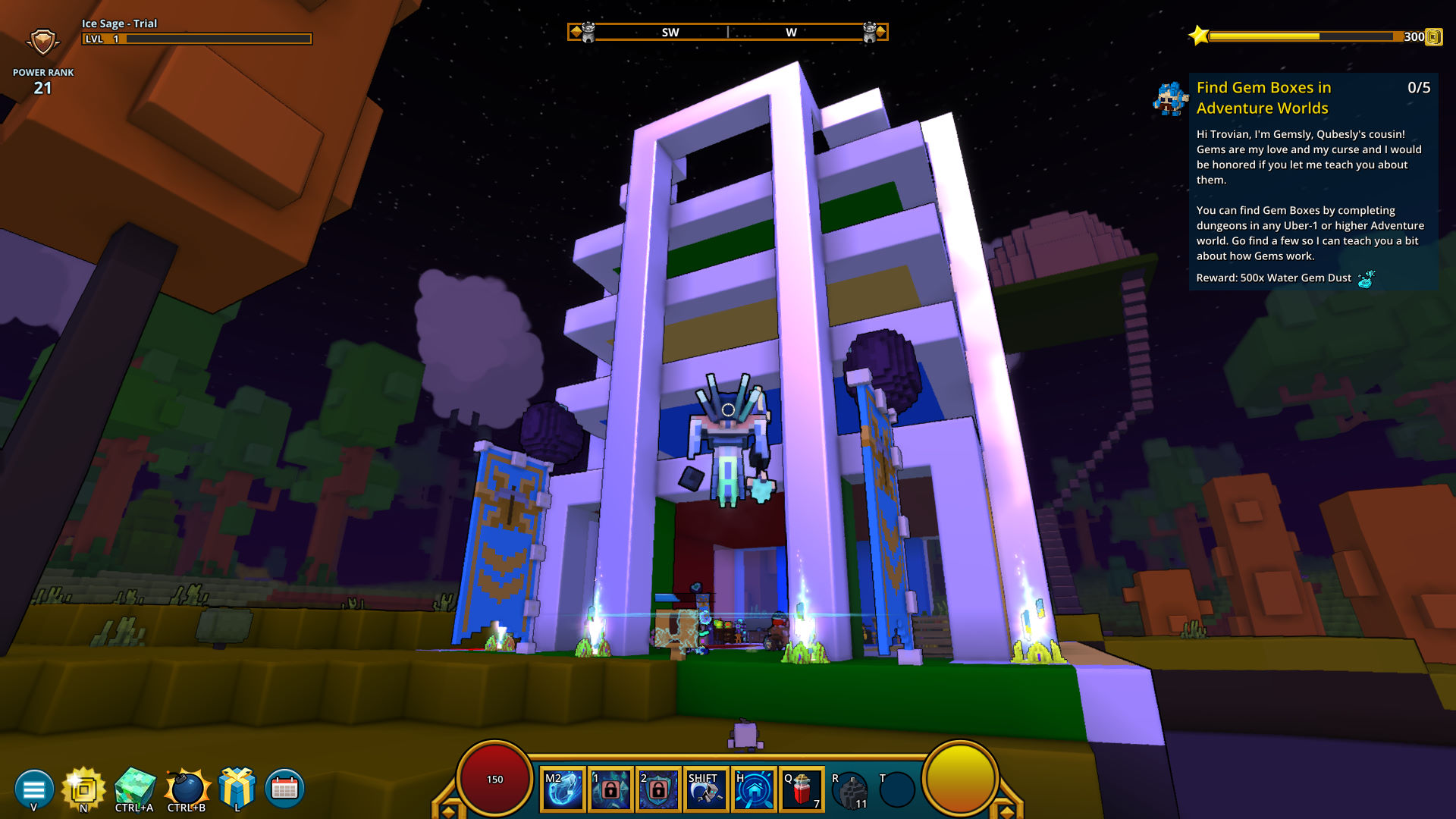 As usual, I’ll be wrapping up polls at 1:00 p.m. EDT on Friday the 13th (mwahaha). For now, I think I’ll put Trove on to the side and see how polling shakes down this time around.