There’s plenty of things to come for the cutesy cubic multiplayer RPG Swords ‘n Magic and Stuff, at least according to a roadmap update shared by the devs of Kindred Games. The map itself, which is embedded below, promises a wide variety of items in progress like housing, in-game mail, and a detailed stats panel, while other updates listed as coming soon include Mac support, alchemy, and fishing.

Further beyond that, the game plans on introducing mod support, minigames and tavern games, an overhaul of the magic system and the pet system as well as the addition of astral magic, dungeons, world events, and new weapon abilities and weapon stats among a host of other features. It should be noted that none of the items in the list have any hard date, though the Steam post does point out that housing, mailboxes, the Windless Woods location, and a variety of fixes and adjustments to existing things in the game are coming in the next major content update.

On the subject of updates, the devs promise weekly news posts from this point forward now that the game isn’t kicking out multiple patches every week. For now, players can check out a broad strokes look at what’s to come in the roadmap image below and on Steam. 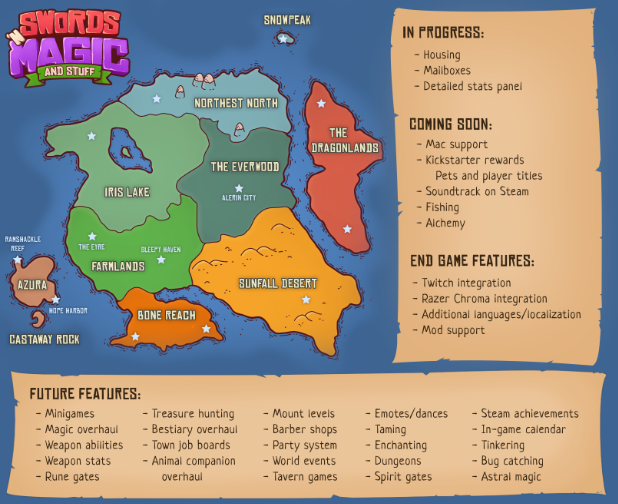