I have to admit, this one didn’t take long at all to get through. I sort of assumed that building things in Trove was a generally simple affair, owing to the big boxy voxels that this game’s world operates on, but I also wasn’t really expecting the building segment to be… well… so quick. For some reason I expected there would be more to it all.

END_OF_DOCUMENT_TOKEN_TO_BE_REPLACED
The whole thing was basically kicked off by following the requisite tutorial steps that talked about the basics of building. One of the helpful little boxy friends of the game’s world walked me through all of the major steps, from placing blocks to laying down maglev track to even being introduced to a couple of blocks that play music. It didn’t really have a particularly deep or practical feeling use, but for covering the absolute basics, it did well.

Incidentally, the game’s overall building system appears to be almost inextricably linked to wider crafting, with certain types of biome-themed blocks only available once you’ve crafted the right kind of crafting station. Furthermore, other crafting stations seemed to be pretty crucial to the overall building idea, such as the item that made those musical blocks get crafted. Honestly, the number of crafting stations that are available in Trove, whether they’re tied to the game’s building system or not, was kind of overwhelming. 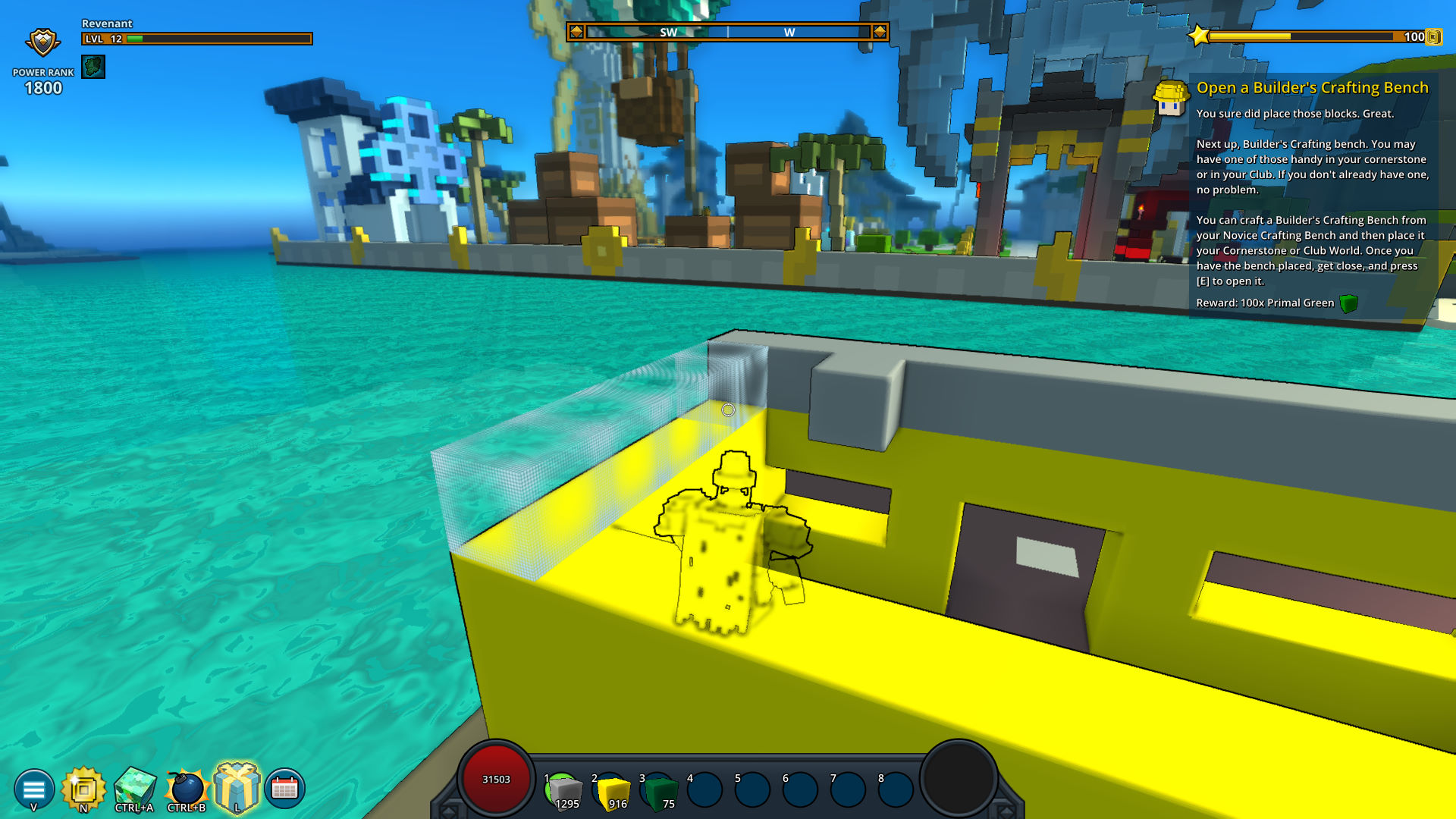 As for the actual building part, this didn’t hold too many surprises for me, especially coming out of a game like EverQuest Next where aiming your mouse to get building items to fall where you wanted them was a familiar struggle. The fact that I wasn’t allowed to float around and aim my view the way I wanted was a little annoying and a bit of an oversight, if I’m completely honest. There were more than a few times initially where I thought I was lining up several voxels correctly when instead they were spreading downwards and at odd angles.

This probably wasn’t helped by the fact that I was building on a Cornerstone out in the middle of the ocean and so angling the camera upwards had it submerge into the sea and made things impossible to view, but hey, I wanted a house in the middle of the water. If the game is going to let me do it, then I’m going to do it.

Building and crafting, of course, also meant I had to go out gathering, which meant I had to start going through the rigmarole of looking up wikis and guides to ensure I knew where to get the materials I needed for the next item I wanted to build or crafting station I wanted to plonk down. This wasn’t a deal breaker, particularly since the materials I was looking for weren’t too hard to find, and time in survival sandboxes had girded my loins for such an eventuality. It was just a little bit annoying. I’ve never been the pack rat kind of person in MMOs, so having to basically train myself to do that was a little bit of a hurdle. It was a learning experience, though; for instance, apparently finding bottles to build a thing was a simple matter of going to a specific biome and zapping them into m inventory. I can’t begin to tell you how many of those things I just walked by or destroyed without any second thought. 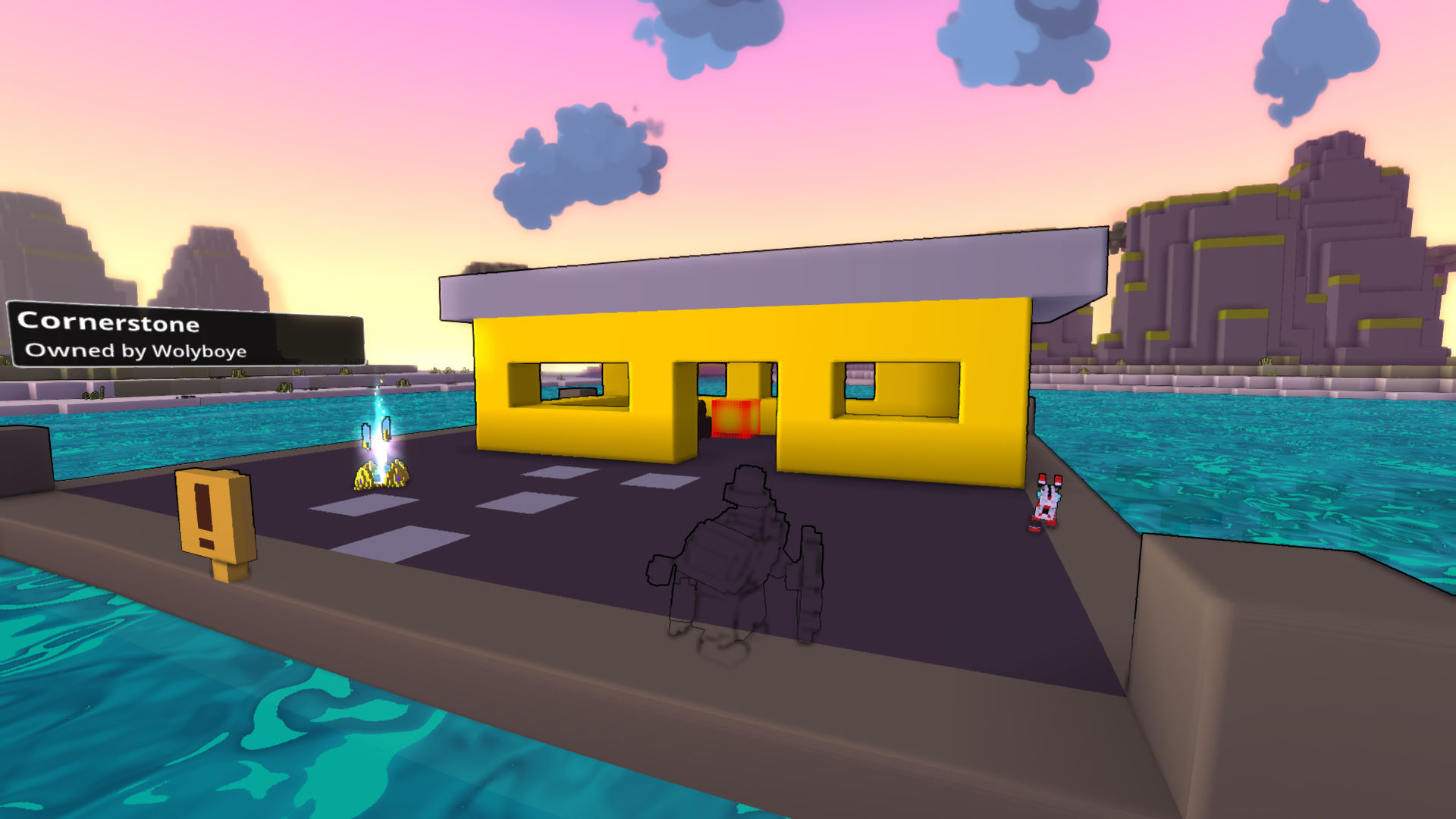 By the end of it all, I started to get a little more appreciative of the things that building is capable of. There are a couple of things that are sort of halting me from really diving in to the whole system, though. For one, having to craft individual benches for each biome in order to create items or furnishings that suit that style is an inelegant system at best and a time sink that I really can’t fall in to at worst. Out of all of the things that Trove does that respects that someone might not have a lot of time to game, this whole system really does seem more invested than I’m really ready to go for.

The biggest demerit of building for me, however, is the fact that the Cornerstone, at least as far as I can tell, isn’t persistent, meaning I have to go to an empty plot and place my house down every time I deigned to move from one zone to the other. Granted, everything that I had placed and all of the changes I had made carried over every time I re-established a home base, but having a home base kind of assumes you get to… you know… live there for a while.

Finally, and one of the bigger surprises for me, is that the items that other players have built, like dungeons and weapons and armor, requires the use of some voxel editing software. I would love to try a hand at dungeon making, but I really don’t have the time to learn new software to do it. 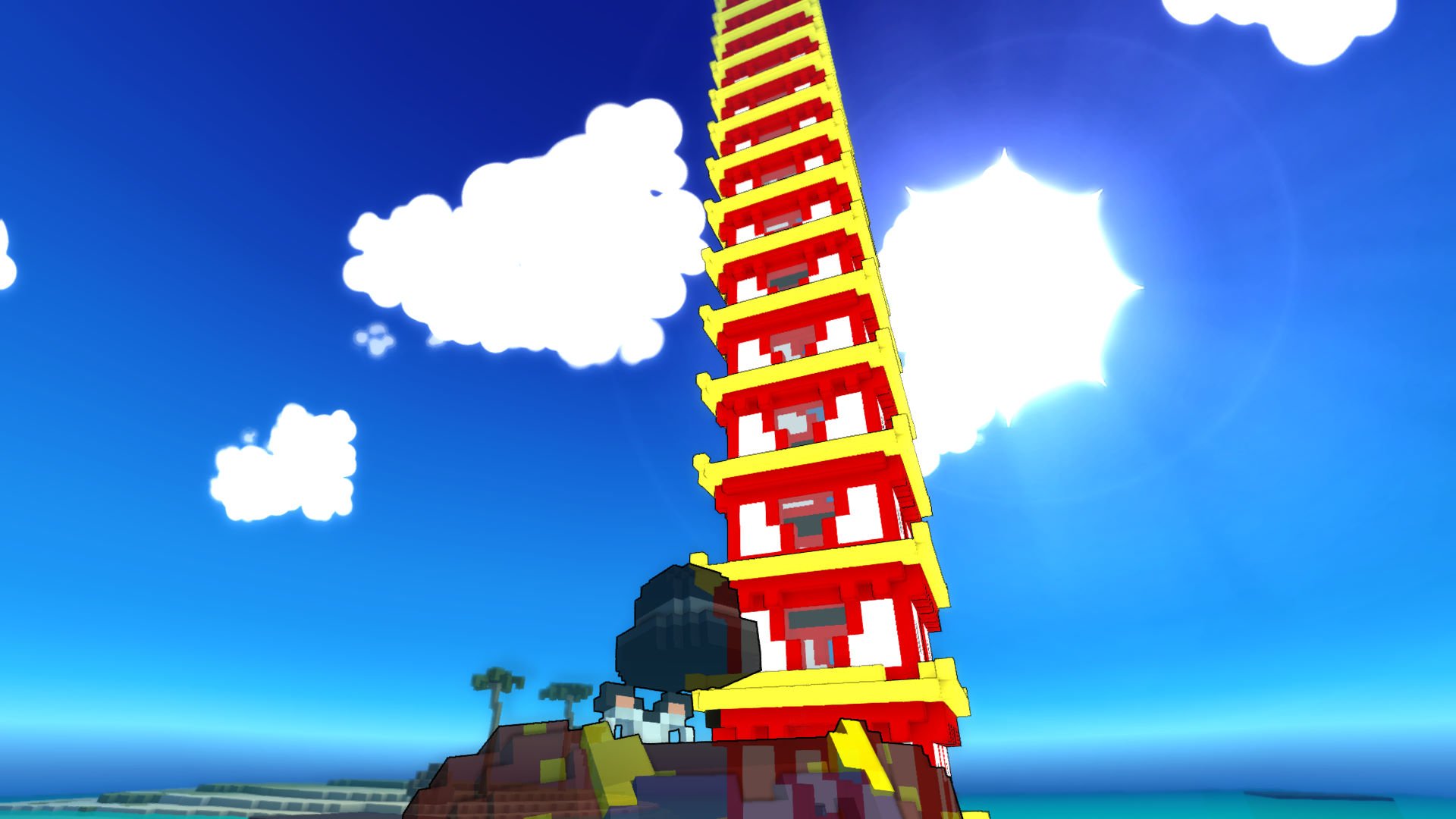 Ultimately, I’m not sure building is an activity I can dig into too much. It’s clear that people are capable of some interesting locations and houses, but I’m not really sure it’s worth all of the effort, especially since moving to a different biome removes the house from the wider public. And really, what’s the point of building a cool place if it’s not persistently there? The lack of housing permanence is a big miss for me, though I understand that Club Worlds – the persistent maps for guilds – are probably more like what I wanted.

Which leads into an idea…

Just before going to print, Bree pointed out that there was far, far more to building than the tutorial beats and my own noodling around would lead me to believe, and while my own experiences with things people have created were mostly relegated to dungeons and items, the Club World feature is where things truly get inventive. So with that in mind, I’ll be taking one more week in Trove in order to root around in the game’s Club Worlds, snapshotting places to visit and sharing my experiences.

That does mean that there is no poll this week and that DCUO is being pushed back a bit, but there will be a relevant poll in next week’s column to start off our journey to DC comic MMO land for CMA. After all, there are powersets to select. I hope you’ll indulge me in this little diversionary trip, but I’m just enjoying Trove a bit too much to really say goodbye.