It seems the blowback from the Pokemon GO community in response to Niantic’s gym/Pokestop situation had some teeth after all. While the community – and we – had championed for COVID-related changes to stay long before the details appeared, Niantic’s nerfing of interaction distance was never something we thought would be among the first bonuses to leave, especially as we were told they’d be here for “the foreseeable future.” That nerf set players and content creators against the company, not just because of the ongoing pandemic but because the original changes aided accessibility, both in terms of player mobility issues and reducing impact on real-life locations.

But last night, that’s exactly what Niantic has finally done. 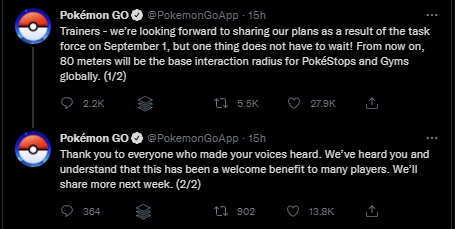 While Niantic has reached out for input to correct mistakes in the past, that particularly effort took months. This change came an entire week before Niantic was set to do some kind of reveal. That’s right, the change is live, right now. While the company says that “80 meters will be the base interaction radius for PokéStops and Gyms globally,” there’s still more to announce on September 1st. While we worry that players may be asked to pay a subscription or something for this, right now we suspect players will be inclined to end the boycott and get back to playing the game normally – and putting money back into Niantic’s pockets.