And you thought Christmas was bad! We’re getting ready for Halloween already in Pokemon Go, and not just for the monthly events. The new season starts September 1st, and the Season of Mischief reveal, which was more visual than usual, laid out plans for Mischief Pokemon Hoopa to start off the three month season on September 5th. The PvP season also looks tricky, not only because of the Halloween Cup but because of the ability for players to vote on a special themed cup via Twitter, with the actual cup going live November 8th.

While Niantic’s been a bit better about accessibility, it’s also wised up to certain loopholes, as the game’s Battle Nights, famous for practically encouraging people to throw as many games as possible for bonus Stardust rewards, will now only increase Stardust for the reward tiers, not the end of the set rewards. Don’t worry though, as there are some good tricks coming up as well! 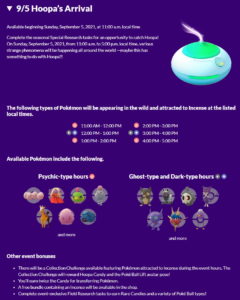 Let’s first focus on the upcoming “Hoopa’s Arrival” event on September 5th, which will award a pose and the mythical Pokemon’s Confined form. While this won’t be the only time you can get Hoopa as per Niantic’s announcement, the studio did say that “if you complete this Season’s Special Research story, you’ll gain access to a special event at the end of the Season that might have something to do with Hoopa!”

The main things I’d suggest focusing on, besides completing the event, would be getting a few good Beldum and possibly Sabeleye if you don’t have them yet. Beldum’s final form, Metagross, works well as both a Steel-type and Psychic, though we don’t know if the event will allow access to its Community Day event Meteor Mash, which is the only move that makes it Steel-type royalty. Oh, and it gets a Mega form, so it’ll only get stronger.

Sableye will also get a Mega form, but its PvE usefulness may be debatable. However, right now, its normal form is a strong Great League pick in case you’re looking to get into that.

The wild seasonal pokemon aren’t much to look at either, though Southern Hemisphere players will have an early crack at Oshwatt, the September 19th Community Day pokemon. It doesn’t look like it’ll shake up the meta, but we still haven’t seen the secondary non-CD move it’ll be getting – Razor Shell – so you may want to grab a few just in case.

Also, be on the lookout for Remoraid, Teddiursa, Gulpin, Numel, Stunky, Dribble, and Foongus. Starting this month, Shiny Ditto can be caught in the wild. If any of those pokemon are Shiny, it won’t be a Ditto, but a non-shiny one can be a Ditto and possibly shiny. Don’t worry, though, as your weekly Research Breakthrough reward will be Ditto as well, so you can possibly get a shiny from that. 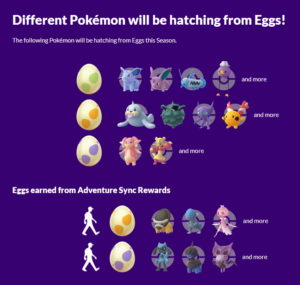 Eggs are looking slightly better for this season. The “and more” part could ruin everything, but 10ks having Audino is good, as is having a non-PvP method for acquiring Mienfoo. The Adventure Sync rewards all have either some kind of use or are rare pokemon. I’d especially advise people to try to hit their 50km weekly goals in pursuit of Riolu, as it’s already very useful in clearing gyms, but only if you can afford one. Its Mega will only make it better, both for as a Fighting-type and Steel.

Raid fans, you aren’t getting any new Megas once again, but Slowbro’s Mega will be appearing in the first half of the month, while Houndoom’s will take over after 10 a.m. on September 14th. While Mega Slowbro’s out, Lugia with Aeroblast will be our legendary target (and Wednesday Raid night feature), while the Lake Trio regionals will take up Houndoom’s time. They’ll also be coming in their shiny forms, if you’re into that, but as a reminder, none of the Lake Trio are particularly useful pokemon, so they’re collector’s items at best. If you’ve missed past releases, try a Discord Remote Raid group.

Curiously, Giovanni won’t be around this month, so Rocket enthusiasts will just have to wait. However, the Spotlight hours may appeal to some of you. Here’s what Niantic’s shown us:

Most of these can be skipped, though people may want to keep rare Research pokemon for September 21st’s double catch candy. If you’ve got plenty of Starpieces or just really need stardust, September 7th is a good time to get a little extra, but Alolan Meowth on September 28th gives 750 stardust per catch. Remember, normal unevolved pokemon only give 100 stardust, so this is better than a double stardust event. You also get double transfer candy, so this is a night not to miss!

Speaking of things not to miss, the September 8th through 13th event mentions psychic pokemon featuring a “revolving” pokemon. That seems to be Inkay, a pokemon famous for requiring players to hold their game system upside to evolve it. It’s a cool pokemon but may not be the best, particularly in PvP; still, it has a neat design and probably evolution method, so you’ll want to get a few. We’ll update this once we learn more about the event. 9/1 Update: Inkay indeed will be part of the event. As Slowbro will be featured for boosts, you may want to Mega Evolve one not just to take advantage of that, but also because it will help you get more Inkay candy. Players may also want to target wild Abras during the event, as its final form is a good budget Pyschic-type and receives a Mega form. Drowzee may also be a good ‘mon to hunt, as it’s fairly useful in Great League’s PvP.

Then we have Fashion Week from September 21st through 28th, which sounds like it’ll feature Furfrou, another “useless” pokemon that’s unique for having the ability to be “styled” to look different. How that may translate into Pokemon GO is anyone’s guess, but it may at least be a neat collector’s Pokemon.

9/13 Update: Full details have been revealed, and Fashion Week may have a larger implication on the game than previously thought. While we were correct about Furfrou coming to the game, Niantic finally has done something with the Form field data mined almost exactly a year ago. For 25 candy and 10k stardust, a player will be able to select which form their Furfrou will be in (though some are sadly location-based, and during COVID no less). Other pokemon with forms could be affected by this, now or in the future, such as Darmanitan or even Deoxys. The announcement mentions that the Hoopa questline does say that Form research will be part of the Hoopa chain unlocked during the event, which will include other pokemon “that may surprise you.”

Until then, fashion fans will have to enjoy the other features of the event, such as Butterfree, Blitzle, and Sneasel getting new fashion appearances. Players who missed last year’s event will still be able to catch or hatch those pokemon, as they will be returning in raids, 7k eggs, and even be in the wild. Players who missed Meloetta during Go Fest 2021 will have a new quest to get it, while players who already caught one will receive more candy instead. Sadly, most of these pokemon either can’t evolve due to their fashion item and/or are not really meta-relevant, so this doesn’t seem to be a great event for raiders or PvP fans. Collectors though, get all that plus shiny Blitzle, which will continue to have a shiny, non-costume form available rarely while in the wild after the event.

There’ll also be “Fashionable Trainers with fashionable Pokémon” at pokestops that will give some kind of rewards. No idea what these may be, so stay tuned.

The event will also have new items for trainer customization and some discounts, so if you’ve been eyeing a new shirt or other clothing in the coin shop, you may want to hold off on that until the event begins. That’s a lot going on for an event that traditionally just adds hat pokemon!

Of course, we’ll update this should we learn more about the event or other September/Season of Mischief happenings, so stay tuned!