A few weeks back on the MOP Podcast, I suggested to our listeners that if they were thinking about getting into Guild Wars 2 on the End of Dragons hype train but didn’t already own the whole bundle of expansions, they should wait until closer to the anniversary as ArenaNet always puts everything on sale. It turns out that the current sale is a pretty good one, though you’ll have to wiggle your way through the Twitch/Amazon Prime Gaming system to get it. (That’s not an affiliate code/link.)

Amazon’s current deal marks the basic bundle of both expansions (along with a character booster) down to half through September 27th for Twitch Prime members – that should make it around 15 bucks total, which is absurdly good even just for the gliding and mount systems alone. Owning the expansions will allow allow you to participate in the free living world stories that you’ve been picking up all spring and summer. (MOP’s Tyler further points out that it’s cheaper to buy this HOT/POF pack and End of Dragons separately than it would be to buy the big HOT/POF/EOD pack right now.)

If you’re not a Twitch Prime person, or if you are and you already own all the things, scoot on over to the Reddit thread, as the mods are apparently allowing folks who don’t need their codes to pass them along to newcomers who do. Feel free to do that down in our comments too. 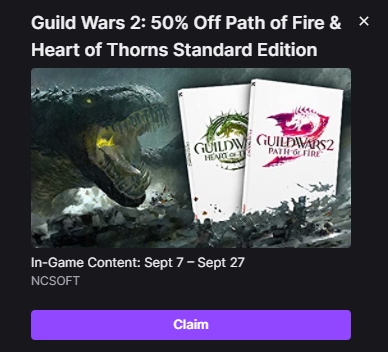 ArenaNet is planning to discuss more about End of Dragons’ fishing and skiffs this afternoon during its 3 p.m. EDT Guild Chat episode, so stay tuned for a run-down of that.

Tune in tomorrow for Guild Chat–we'll be sharing lots of details and gameplay of #GuildWars2: #EndOfDragons skiffs and fishing! See where and when to join us here: https://t.co/eJz7BOACHm #GW2EOD pic.twitter.com/602JCqMp8e

WoW Factor: The disjointed state of World of Warcraft