In addition to the massive list of server names, Amazon provided launch times for the five regions that it’s supporting. It looks like the times are staggered somewhat, although not so much that one country will have a great advantage over others. Those in North America may want to go in late to school or work to grab their names, as those servers open up first thing in the morning.

Speaking of servers, Amazon said that it’s holding additional servers in reserve to be deployed as needed if the 176 shards aren’t enough. The studio also said it will be looking into other server locations after launch (which Southeast Asian players have specifically requested). 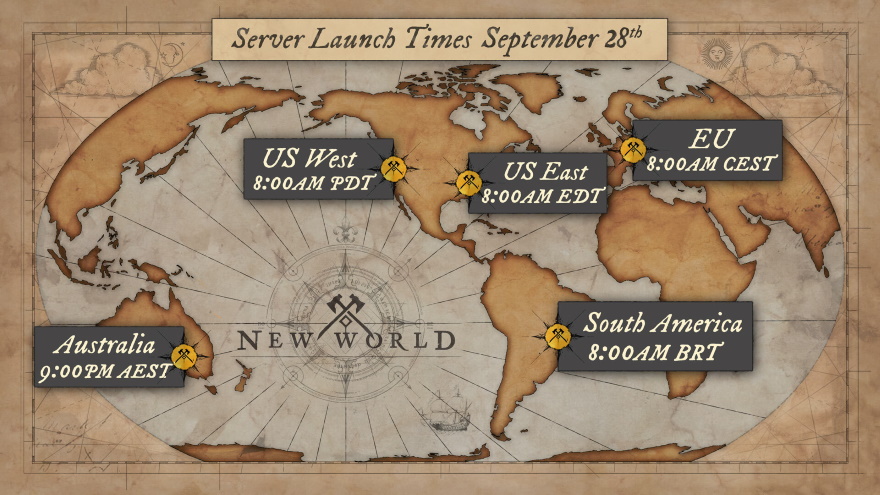 I just hope they allow players to download the client days before the launch.

TL;DR: Not the least bit hyped.

We don’t know if names are global or regional. Reddit has screenshots of support staff saying both things. We should hopefully get official info soon.
Also keep in mind than any pre-order or deluxe edition goodies are delivered to the first character made, and that character only, so making an EU character to reserve a name will make you lose out of whatever entitlements your account has.

Update: names are global, and pre-order bonuses are granted to every character you create.
Creating a character on any server is enough to reserve a name – no need to log in. Deleting a character will free up the name after roughly a minute.

That’s a pretty cool way to time the launch, I wonder why Australia is 9am and not 8am like everyone else?

It’s even worse than that. Australia is shown as 9 pm, not am.

Bring on Tuesday night, I’m very happy with the timing of the aussie servers.

Yea but 9pm aussie is 4am pacific time. They’re getting 4 hour head start over pacific servers.

*To provide the best possible experience at launch, we’ve decided to open our Australian server at a time that aligns with the larger global roll-out. Following the 8AM pattern for Australia would have resulted in it being a different “day” than other regions due to the time difference, and we wanted the region to be able to share in the launch community elsewhere in the world, like streams and website posts.

Looking forward to logging into the EU servers at 2am to try to grab my name since region launch times are staggered but names are global. Fun times.

2021 and many new mmo’s still arent basing names on the account, causing people to have to worry about getting the one they want.

Don’t worry, I’m sure xxXXHairyPwnerXXxx will still be available for you. Haha, sorry I’m sure you have a really cool name in mind I just couldn’t resist.

AFAIK names are per server group, not global

They are global and so are guild names, most likely the intend is to condense all servers eventually or have the option to do so.

Ouch! Thank god you can have surnames… or does only the first name count?

In all honesty, i do not know but i cannot remember that you entered your surname in a different box right?
So that tells me it is all the same data so you should be able to have mutharex and mu tharex for example – i think-

How will the people that pre-ordered direct from Amazon download the game?

They’ll send you a Steam key on Monday.