While Path of Exile’s new Scourge league is fitting for Halloween, the expansion also brings some goodies and changes that will last beyond the holiday. These updates are permanent additions to the base game, so all players can enjoy them regardless of league participation. Grinding Gear Games’ Chris Wilson unveiled these during the big reveal livestream earlier this afternoon. When Scourge goes live on October 22nd on PC and October 27th on console, players will get to experience a passive skill tree revamp, new passive masteries, currency stacking improvements, and new uber endgame content

END_OF_DOCUMENT_TOKEN_TO_BE_REPLACED
Additionally, guild got some love this time around, from stash improvements (including specialized tabs) to even guild hideouts! And for all those who loved Expedition, the league is rolling into standard as well.

When I first saw Path of Exile’s skill tree, it stressed me out. It’s huge! And more like a wild-growth bush. But it is also a big reason for the many options available in gameplay, so hacking it down would never be an option. However, GGG has found a way to prune it to work better without destroying the muscle memory of long-term players have to find the stuff they want. “I want to emphasize that our goal has been to keep the tree as similar to before as possible,” Chris Wilson told me. “All of your years of muscle memory will not be wasted: The tree will still feel like the back of your hand, despite our changes.”

Those changes include improving the starting areas, improving clusters of skills and adding new ones, and concentrating power on the primary aspect of the skills. For that latter, in some cases it meant stripping niche stats few used and buffing the primary function in recompense. Keystone-wise, a few keystone passives, some have been rebalanced, some changes locations, and six new ones were added.

While working on this revamp, the devs noted that those skills with build-enabling niche stats were pretty scattered, which of course meant players would have to expend much and sacrifice flexibility to build their way out to a specific skill. Builds become a way to get to that skill instead of utilizing lots of different skills. To remedy this, Path of Exile will now have passive masteries.

In this system, outside of the class start locations, all passive skill clusters that have a notable passive in them can now contain a Passive Mastery. When players allocate the first passive in each cluster, a mastery becomes available to allocate in that cluster. When spending a passive skill point on the mastery, players then choose a specific stat to gain. That list of choices is shared with all clusters on the tree that have the same theme, so players can travel to any of them, not just some obscure out of the way place. And there’s another benefit to this, as Wilson shared: “This mastery system has essentially let us add hundreds of powerful new notable passives that you can access from all over the tree. ” 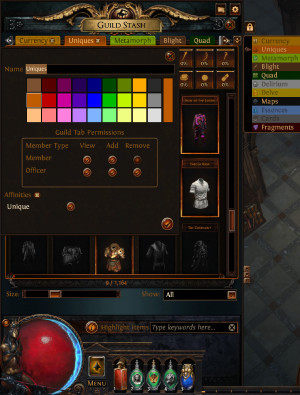 Getting the guild goodies

Guilds got to fill their treat bag this expansion. GGG made improvements to the guild stash tabs, making it easier to click items in and out as well as adding premium stash tabs for ease in sharing currencies, uniques, maps, and so on. And for all those housing aficionados,  get ready for guild hideouts! Congregate, run maps, and — of course — decorate!!

Speaking of decorating, the favor system has been removed from POE, making all hideout decorations that could previously be obtained with favor now available to all players in unlimited quantities. This includes personal and guild hideouts. Additionally, players can now filter decorations by tag to try and find what they are looking for.

While seemingly a small thing, currency stacking can be a big deal. POE has already improved how it stacks in your bag and storage, and now improvements are happening to looting. As much as folks enjoy grabbing loot, stopping to pick up tons of individual currencies can get annoying. When Scourge launches, currencies will not drop as frequently, but they will drop in larger stacks; you get the same amount with less effort. When items can drop in stacks, they will. This applies to the end of Delves, Incursions, Rituals, Blight encounters, Breachstones, and the Simulacrum as well as many chests and areas like splinter drops throughout the game.

While not all leagues in the standard game, Expedition gets to right off the bat, replacing Perandus. Of course, there are some changes involved. The artifacts will no longer be tradeable (but they are looted automatically now!). Expeditions will start showing up in Act VI.

Considering how many years Path of Exile’s has been going and how many leagues move to standard content, I find it makes sense that the most experienced players are no longer challenged by even the most difficult endgame content. To add more challenge in for them, GGG is adding new uber versions of some past leagues for us to aspire to — Blight, Breach, Delerium, and Legion. Delve is also being revamped. Here’s a peek at some of the differences (the rest are highlighted in the reveal video above):

Uber Blight – The addition of Blight-ravaged maps where monsters are always level 85; can be anointed nine times with up to three different kinds of anointment.

Uber Delirium – The Simulacrum gets ten additional waves of combat with increasing chances of dropping cluster jewels and spawning bosses. Players can also leave with multiple valuable items instead of being restricted to one.

Uber Legion – Combine up to five timeless emblems to enter the Domain of Timeless Conflict where you can find Unrelenting Emblems that can be mixed and matched with Timeless Emblems for a substantially more challenging and rewarding encounter.

Delve – Besides being rebalanced, GGG improved he Delve by doubling the sulphite cap, increasing the instance of underground cities and bosses, and improving monster skills and biome modifiers to make deeper depths more challenging, to go with their better rewards. Additionally, folks who enter the Delve at 90 will go directly to tier 13 maps instead of tier 1. And although the Delve ladders were wiped, character progress was saved, so no one needs to start over.

Even if you aren’t going for the uber areas, the Atlas itself was streamlined for your endgame enjoyment. Its regions have been halved to four total, which reduces the number of watchstones needed from 32 to 16. The number of unique maps has also been reduced down to approximately 100, which in turn halved the number of Atlas passive trees (though they have each been expanded). What didn’t change was how many passive skill points players are awarded.