We’ve been tracking Stormhaven Studios’ moves all year, ever since the company announced that it was rebranding Saga of Lucimia as Embers Adrift following the bizarre departure of the game’s original founders. As of this summer, the company announced it had raised enough money to launch and set preorders for October.

October is here, and as of this morning, the game has opened up preorders as planned. Executive Producer John “Drindin” Gust explains that preorder players will be invited into the game’s test this weekend, followed by continuing “regular weekly test sessions” on Wednesday nights. This weekend’s test is expected to focus on the newbie experience in the first two zones. 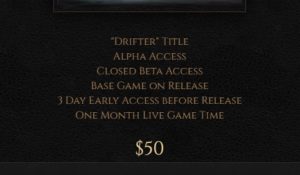 “We are consolidating testing in these early zones to test early gameplay progression, balance, servers, and the social system, ” Gust says. “As the weekend tests continue, we’ll unlock more and more content as we shift focus to test other areas of the game. Testers can expect frequent character wipes as we tune or change content. The NDA is still in place, so testers will not be allowed to stream, share screenshots, or video capture.”

Preorder access is currently $50 and includes the game, access to the alpha and beyond, headstart access, and a month of game time. Do note that if you backed Lucimia when it was still buyable, all of that carries over through the rebrand, so you won’t need to buy it again. “All previous pre-alpha, and alpha purchases remain intact and have been transferred to Embers Adrift,” the FAQ clarifies.

Check out our latest Press Release and join us on our FORUMS and DISCORD!!!
https://t.co/Kn3m5OB1RKhttps://t.co/3EnRYqVB8s pic.twitter.com/Al3dnZsQb0