So as that headline suggests, I probably mad a bad call adding Lord of the Rings Online as an option for a CMA column. But not for the reasons one might think.

I’ve done themepark MMORPGs in this column before, and I like to think I did a pretty good job at them, but this game is a different themepark beast than others. For one, I’m starting to get a better sense of just how absolutely massive this game is in terms of size and scope. There’s a lot of levels waiting for me here. Not that I was going to experience them all, anyway. 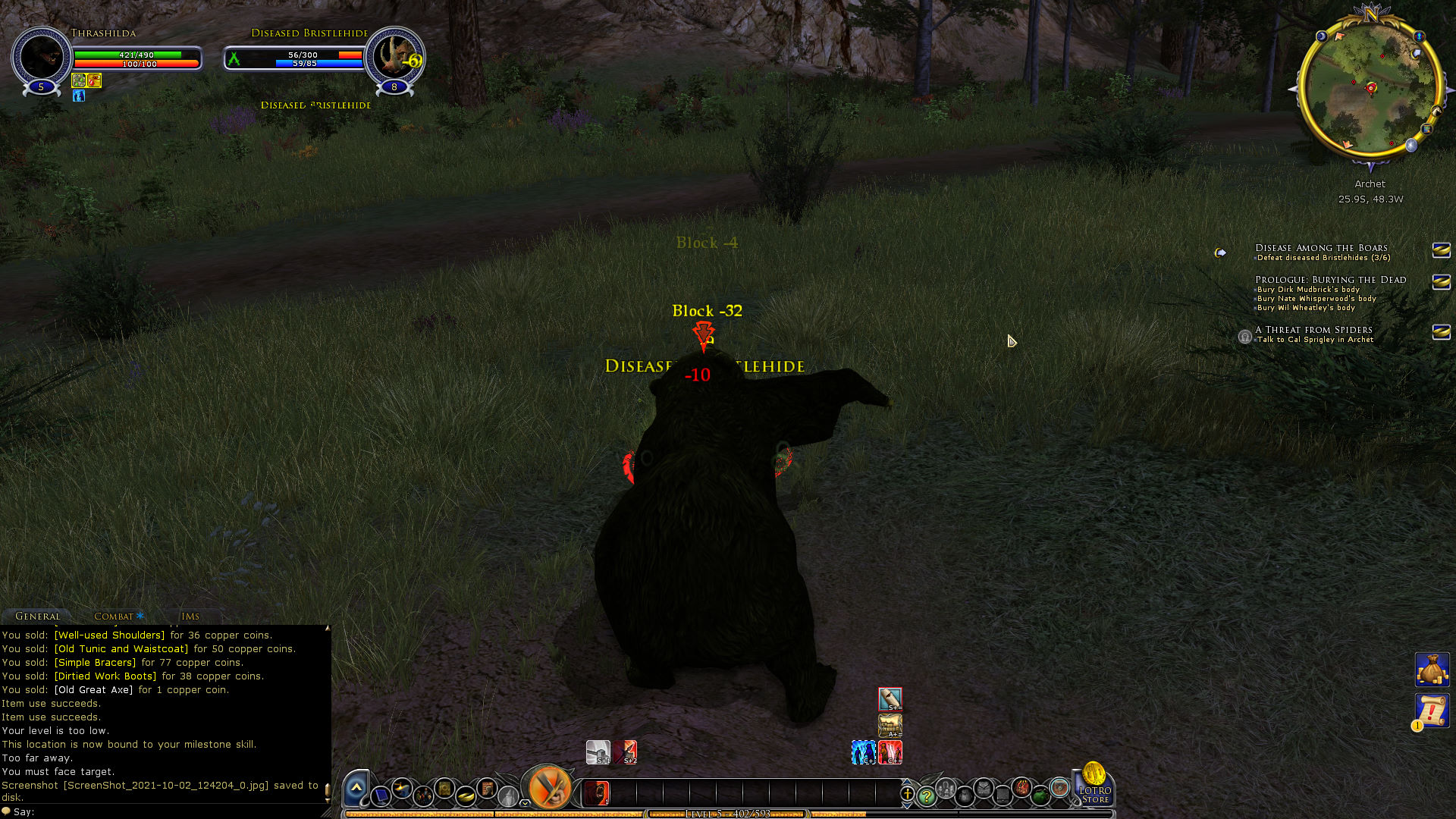 No, what has me thinking that adding this game to the options is that it’s very deliberately paced. MOP’s Justin has written about this in the past, mostly discussing his experience in the progression server, but I get the same sense that even the regular servers operate on their own very slow, measured, and specific speed. The breadcrumb trail, for better or worse, at the interim, is very set in stone. It’s not even a breadcrumb trail. It’s like a four-lane highway.

That might read as a complaint, and it kind of is, but that’s not necessarily meant as a demerit to LOTRO as a whole so much as just a complaint about focusing on it for the column. This game is way too specific and way too slow, in my opinion.

Furthermore, I’ve been through this area before, so there’s not much different than what I played so many years before. I’ve been a human Captain and a human Champion before, and played as a Minstrel when the game first came out. In all of that time, none of the Bree-lands quests holds surprises for me, making it not only slow but boring as well. I suppose I shouldn’t be surprised – the game has been around for a while, so why would they change those early bits? 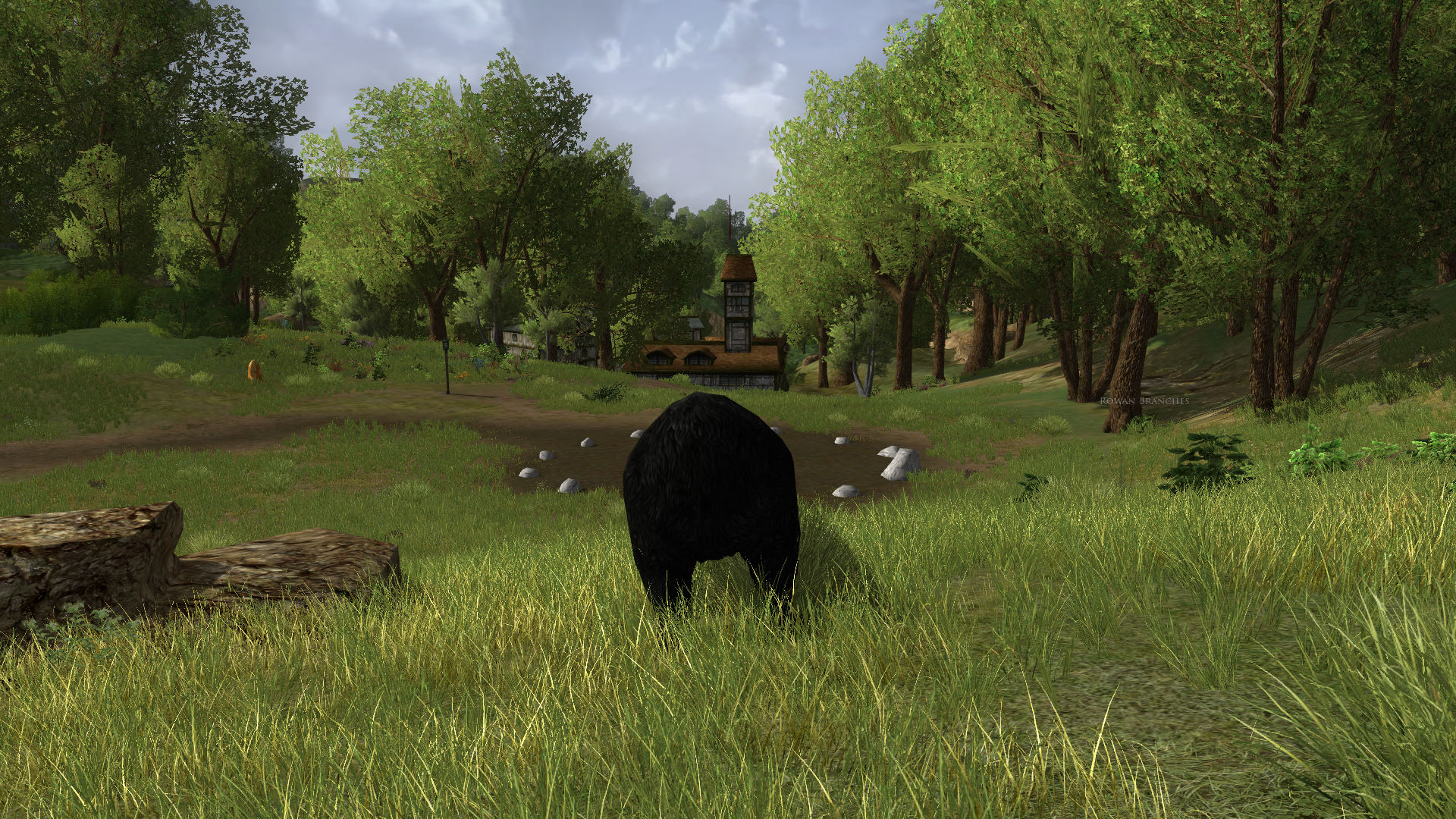 What has been different has been the Boerning, unsurprisingly. It’s enough of a divergent class that it’s held my interest through what’s otherwise been an experience that’s mentally like slogging through waist-high mud. For the most part, anyway.

The DPS bear tree has been extremely powerful, for one thing. The moment I picked the trait line, I got a couple more skills to enjoy and have been mostly pouring my points into making my primary bear attack hurt that much harder, and over the next several levels I could feel my bear getting a whole lot meaner. I don’t think it’s got more HP than my human form, or better armor, but it certainly feels like it has both of those things. Also hot damn do those claws hurt.

The rotation of attacks is pretty easily sorted out at this point, and I know what buttons to hit when for maximum bear slap. It’s not complex. It’s devastating and powerful. I am a bear everywhere, except for points where I’m forced to be human so I can use my dumb human hands. But otherwise, whether I’m talking to NPCs or doing quests, I’m a bear.

Which, incidentally, made for some amusing bits during the portion of the main quest where I was being introduced as a potential new recruit for the Blackwolds. “Ah, so you’re the new blood. Funny you’re a bear with deeper levels of cognition beyond a predator. Eh, anyway, welcome aboard!” 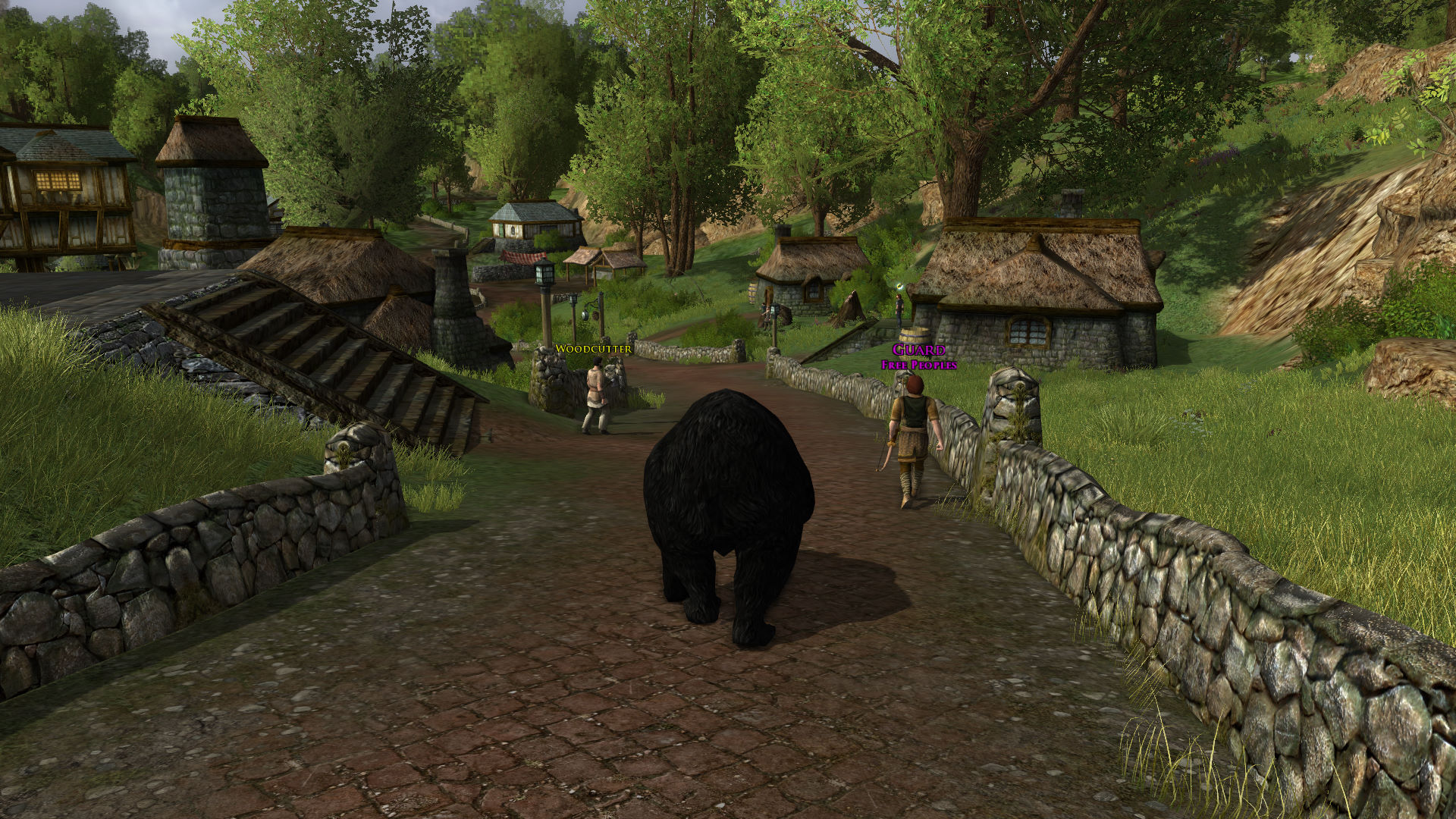 Even as interesting as the hurtbear has been, though, I’m not really sure that there’s much more that I can get out of this one without mainlining it for hours on end to expedite the options for this column. And as I’m learning – and as Justin wrote – that really isn’t the way that this game is meant to be played. I wholly agree that this game is 100% about the journey and not the destination, and since my choices on what that journey will be are kind of limited right now, I don’t think this one has legs for me. Also, just blitzing through the quests sucks. Even if I have experienced these dozens of times over.

I wholly recognize how stupid a complaint it sounds to have too much game to experience. Considering how fast most MMORPGs can be consumed, having a veritable feast before me should be a boon and not a burden, but it is. This column just doesn’t fit in the square hole of LOTRO, and I really don’t want to just run pell-mell through this game. That feels like an insult. Or, more specifically, playing the game wrong.

I don’t know, maybe I would have been better off starting off with something different. I did the hobbits stuff one time. The elves just a couple of times. The dwarves once or twice… Well, maybe not. 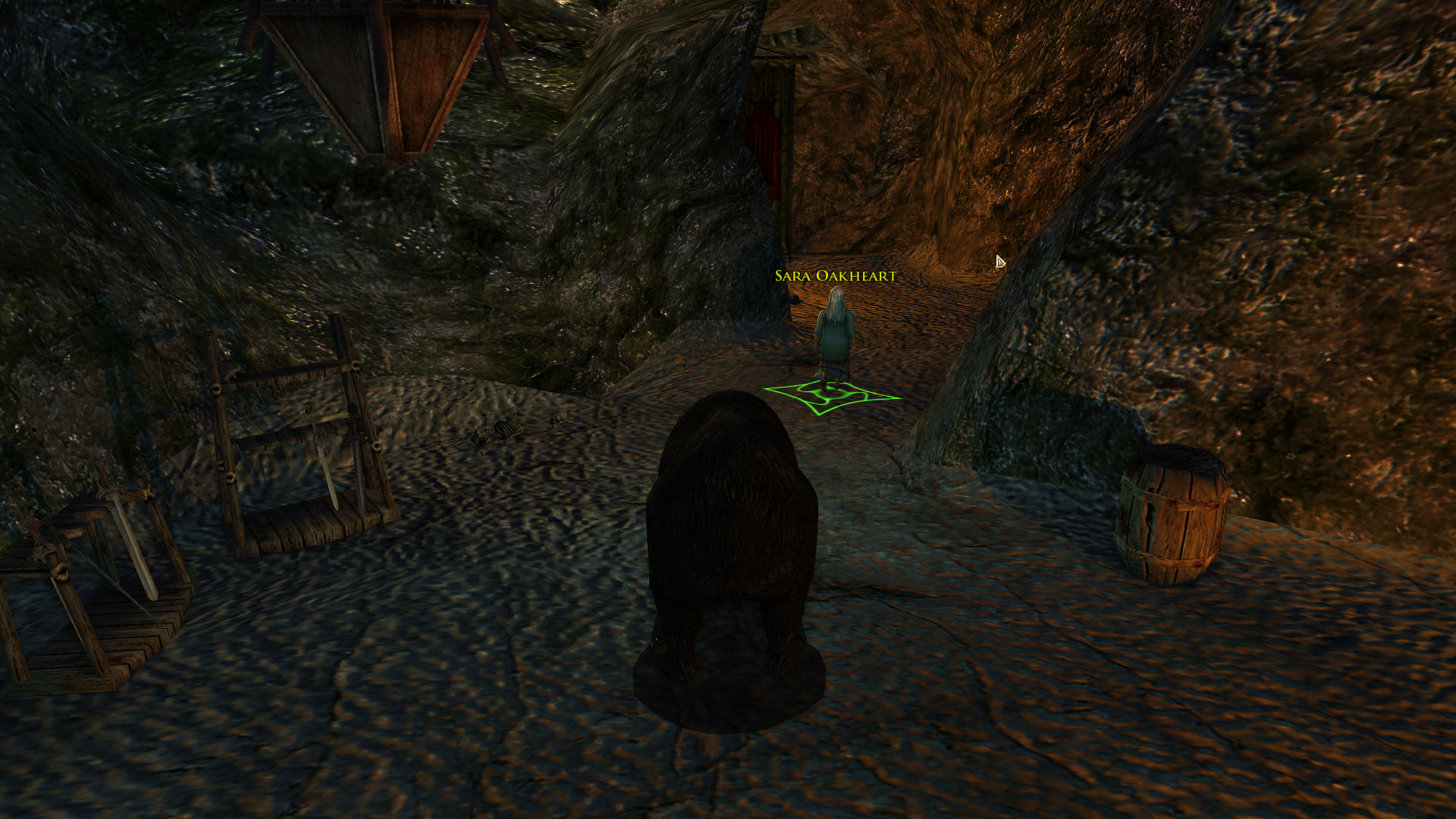 Regardless of how I’m feeling about things, though, I still have at least one more poll option that I can exercise here for this week’s column. There’s a fall festival going on in-game and that seems like it’d be fun since I’d never experienced it before. Unless, of course, the journey I’m on right now should be the focus for the last part of this adventure. Thus, I turn to you.

Should I press on with the story or diverge from the path?

The second poll, as one might expect, is about the game we’ll be focusing on for next month’s focus, and frankly, I’m tired of Tolkien’s fantasy world. And of fantasy in general. I need me some space stuff. So sci-fi and space things will be the lion’s share of options for this round of voting. You’ll also likely notice that a couple of these options have been here before – in fact two of them were the first games I did when I took over this column! That said, there’s been enough time (and I think I’ve got enough knowledge) that I think I can come up with different things to do if I do make a return trip.

Which game should I play next! Choose My (Spacefaring) Adventure! 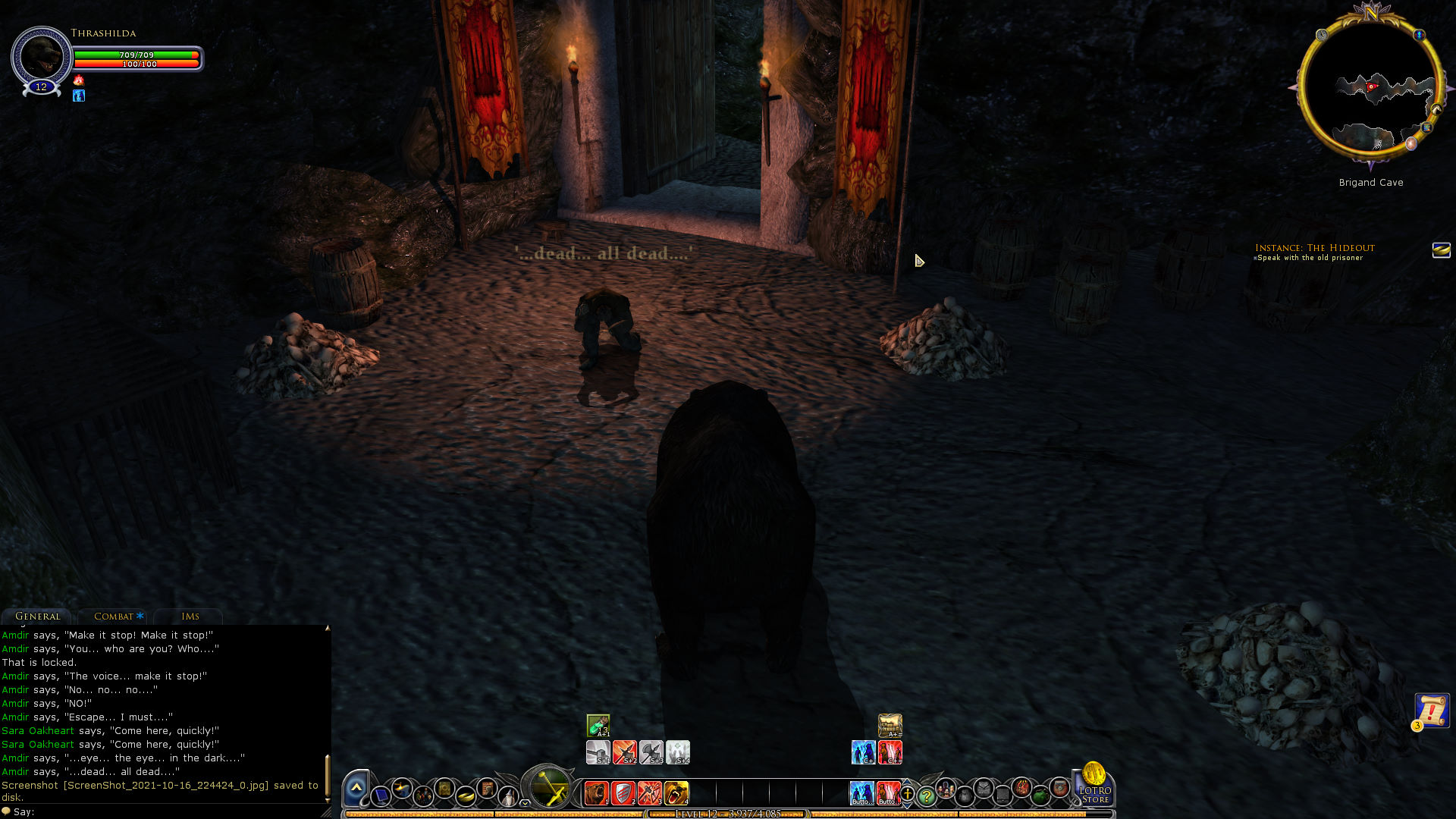 As usual, polling will be closing up at 1:00 p.m. EDT this coming Friday, October 29th. In the meantime, I’m just… going to do something else. I don’t know that I’ve got the energy to be a bear anymore.

Festival Hint: Talk to Opal Goodbody at the Party Tree after you arrive. She’ll send you to Lobelia (shiver) Baggins and then Gaffer Gamgee and then, well, you’ll see.

Gotta say, the Haunted Burrow is one of my favorite festival areas, but don’t miss the corn maze in Wistmead.

Good article Chris, I think you captured how the games structure made it a bad fit for CMA really well.

My one nitpick is you called the game a square shaped hole when calling it a hobbit shaped hole would have been so much more on brand.

Yeah, LOTRO is very guided. There are things you can do regarding professions, but keep in mind that leveling through professions was only added about halfway through its lifespan, so it’s not really made to handle it.

I know you’ve got access to a few nice ships in SC, but if you’d like to cruise in some different ones, let us know.

You’ve met Sara Oakheart. What if I told you there is a plot twist later on that involves her? (Spoiler: she doesn’t always walk that slowly.)

I hate every escort quest ever conceived…