Well that was quick! Recently announced Pikmin Bloom and its global rollout have already made it to the United States. And since we announced its formal name and gameplay, I’ve gotten some hands-on time with the game for our Massively on the Go column.

Before we leap in, I should note that unlike previous Niantic titles, Bloom currently seems to lack a PvP option. I’m merely at level 9 of 60, but there are no teams, no gyms, portals, or raids that I’ve found. It feels like a gamified pedometer, which is actually similar to how I play Pokemon Go except without the combat distractions that encourage me to stop walking and start standing still.

And that’s a good thing.

Niantic’s core values are always described as exploration, exercise, and real-world social interaction. Again, this is an early impressions, mere hours into the game, but this finally feels like a game that pushes exercise to the front. It does kind of push you into certain areas to play, which I’ll get to later, but it’s been fun to feel physically and virtually rewarded for having a decent pace.

The game is so new that I’ve yet to bump into other players. I’m not 100% clear on the breadth of its multiplayer features, but the flower spreading mechanic, which is the main gameplay function to interact with nodes (again, without combat or teams) could potentially be used for stalking, so it’s something I’m keeping an eye on given the situation in Pokemon Go. It is used at will and best to use near nodes, so for the time being, I’d still recommend people play with caution and in open, public spaces with the flower spreading power on. Feeding your Pikmin, expeditions (one of those cooldown, game-of-timers features), sending postcards to friends, and AR shots are all safe to do at home. 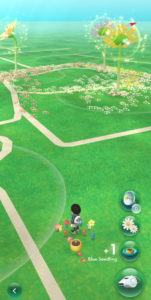 You may also want to play in groups and be mindful of your surroundings, as Niantic’s titles always suggest. The game encourages you to use the flower spreading mechanic near flower nodes, but when they’re alone and on a street corner, it’s both unsafe and could make you appear suspicious. The game certainly seems best played in a park with multiple nodes stacked on/near each other. A walking track is best, no doubt, and that’s where rural players may run into some issues. Several of my nearby parks have only one or two nodes nearby but away from reinforced tracks, so a walking path that hits them would look weird to any neighbors watching you, to say nothing of police or security in the area. Flowers are visually fun, but the only reward I noticed was an extra expedition option in the area that may or may not be on a cooldown.

Like many Niantic games, this feels like one where you’ll want to find an optimal spot and stick to that for the most part, especially when spreading flowers. Exploration, though, may help you find nice stuff to send your Pikmin to for expeditions once you unlock them at level 6 (I had to refresh my game to get that option to appear).

The overall feel so far, though, is more of a Nintendo game than a Niantic title. I’ve got zero temptation to put any cash into this so far, and not because of my issues with Niantic but because the game is mostly easygoing so far. There are supposedly co-op, PvE battles (at least in beta), but I’ve yet to find those. Maybe that’s where the real game is. But for now, collecting fruits to feed pikmin, growing new ones, and collecting their petals to spread around town is fun enough.