City State Entertainment’s co-op battler Final Stand: Ragnarök apparently stomped its Viking boots onto Steam early access this past week. Players who plunk down $20 for this advance look can enjoy a looter slasher of the northern variety, with waves of thousands of mobs crashing down on their heads.

According to the Steam description, “Ragnarök is upon us, and Odin needs heroes! Choose your champion and stand your ground against thousands of enemies in this action-style, online co-op match and lobby-based PvE battle for the fate of the universe.” 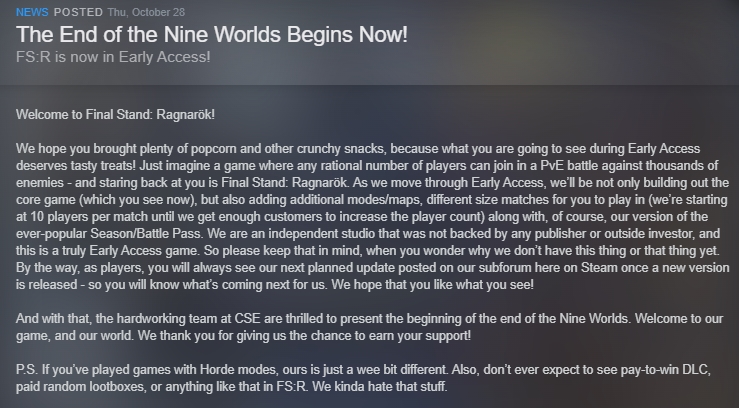 Final Stand: Ragnarök first started allowing players into its world nearly a year ago, although this is the debut of its Steam version. The title has proven to be divisive among CSE’s fanbase, not for its content but for the fact that the studio decided to start developing a second game before fully launching the long-awaited Camelot Unchained.

Last year, Mark Jacobs argued that Final Stand would actually benefit the MMO when he said, “If FS:R is the success we hope it to be, even more people will be hired to work on CU only and your turn to see your game go LIVE will be shorter than you fear it to be.”

Camelot Unchained is still in beta, where it’s been sitting since July 2018.

Source: Steam
MMORPG veterans will know that Camelot Unchained, which was originally Kickstarted in 2013, has taken flak over the years thanks to delays, the founding of a second studio, the announcement of a second game using CU’s custom-built engine, and delayed refunds. The game entered its “beta one” phase back in 2018, with tests capable of putting 3000 humans and bots on the battlefield simultaneously. As of 2021, the studio says it is still paying refunds and is still working on both games, though it did not follow through on interviews with press.
Advertisement