Entering into Avorion for this month’s Choose My Adventure column had me assuming a few things. First off, since this game was very much about building your own ship, I sort of assumed it was going to be a pretty involved affair. I also had assumed that I was going to be pretty bad at it. I wasn’t expecting myself to be this bad, though. Still, I think maybe I came away with a bit of knowledge. Just a bit.

First off, I should note that I’ve been playing the game in single player mode for the time being, but not for want of trying. There were a wide array of multiplayer servers that were online when I fired this game up the first time, and though most of them were locked or private, there were a number of them that were also open. Unfortunately, a lot of them were also about PvP, which I didn’t think was going to be particularly helpful for someone who was absolutely brand-new to the game. So, regrettably, I stayed in my own personal galaxy and might do so for the foreseeable future. Unless someone reading this happens to know of a PvE-minded server. 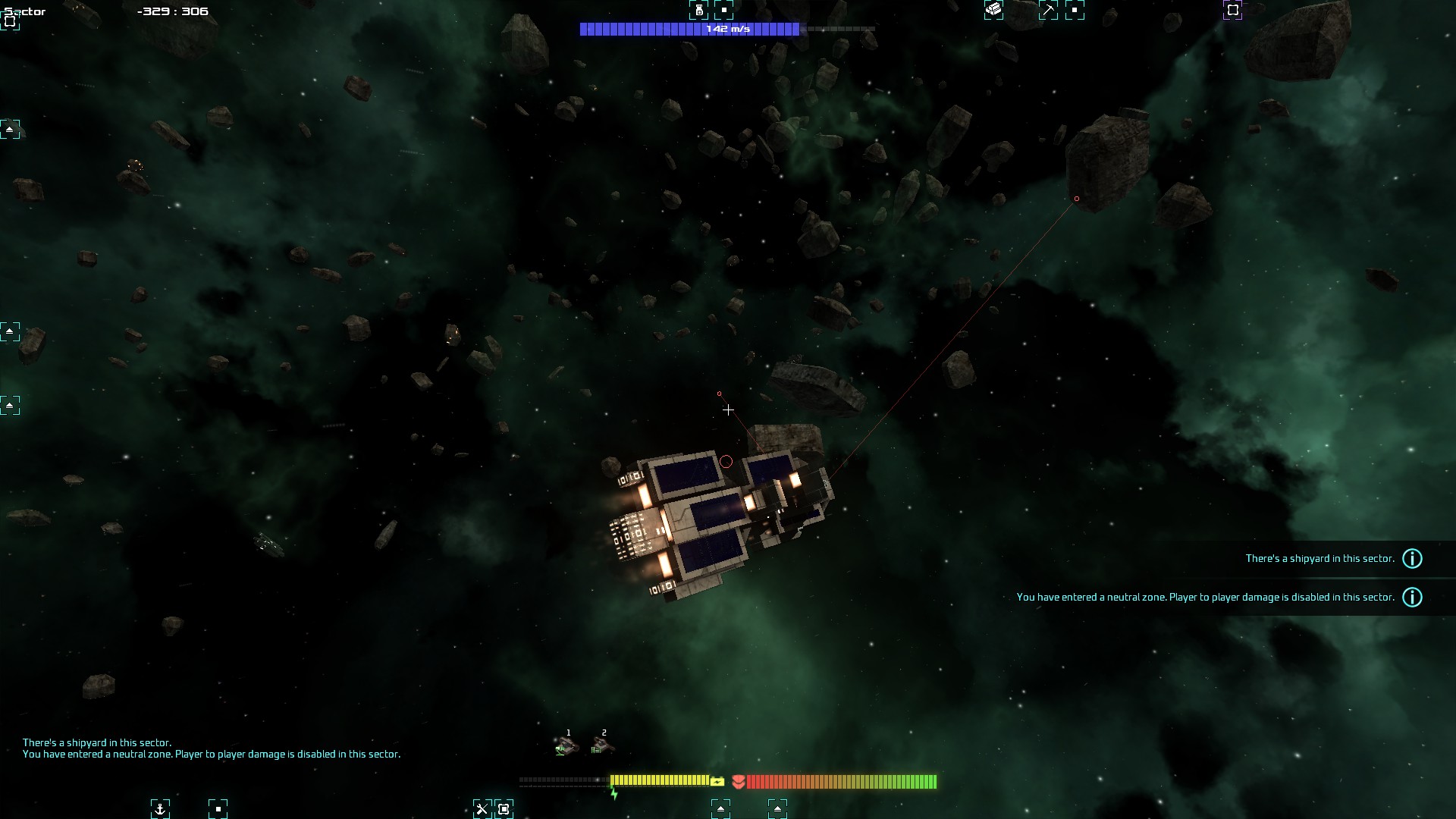 I elected to start off with the game in its recently added “normal” mode, which served as both a tutorial and a point where I would effectively start from square one, without any building knowledge. This mode has what seems like a more structured form of progression, though it also didn’t really seem to outline how that progression works. The thing about Avorion’s tutorial is that it did the same thing that EVE Online’s did when I experienced it at the time: It got me acclimated to controls and bare bones mechanics, but it didn’t really give me a sense of how to progress.

That said, the actual meat and potatoes of this game’s tutorial were pretty substantial. And they had to be because there is a lot to unpack in just those opening beats. Of course there were the usual ship controls and combat controls to suss out, as well as how warping worked and other things like that, but then it flipped the script by actively leading me into a fight that I was not supposed to win, implanting one of the game’s guiding principles: You don’t fit everything to one ship, and being destroyed is part of the natural order.

This, naturally, led to Avorion’s biggest hook: fully custom shipbuilding. And that’s where we circle around to this article’s title. I can’t really call shipbuilding in this game Kerbal Space Program levels of challenging in terms of its form of aeronautics, but I quickly started to realize there was a lot to learn in designing a functional spaceship. As expected, the ship’s mass is directly related to how many thrusters you’ll need to attach, but then there are also lateral thrusters and omni-directional thrusters that control pitch, yaw, roll, and side-to-side movement. There were inertial dampeners that needed to be installed in order to reduce drift when changing direction.

And that was just the propulsion systems that I had to consider when I was clapping together my ship. I also had to think about how many blocks would be devoted to things like crew quarters, since hiring crewmates to man things like turrets and other stations was vital. I had to consider where to put armor in order to best protect my ship. Turret placement was crucial in order to best have the right focus of fire. It was a whole lot to take in for someone freshly off of the just-exploded boat. 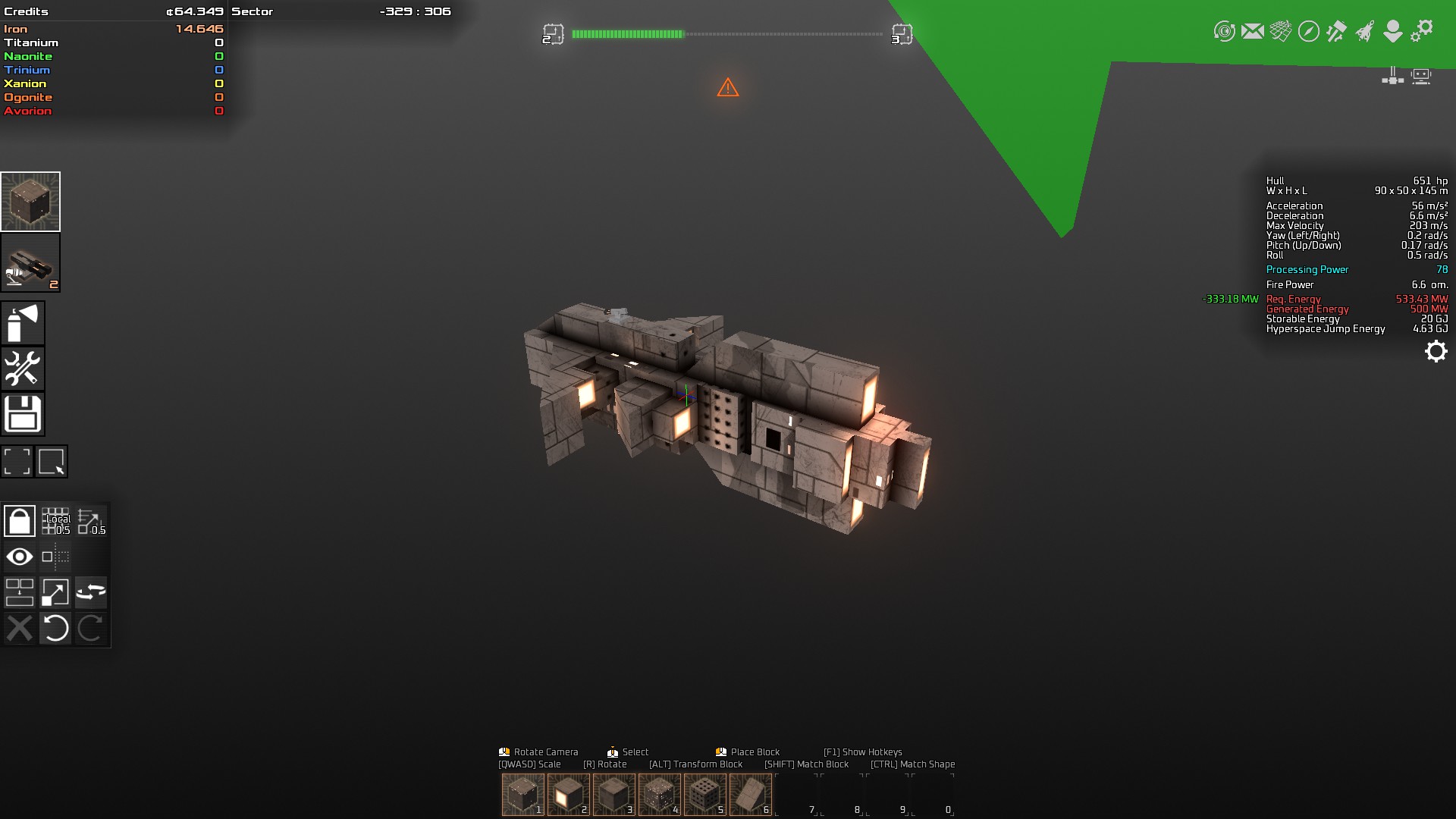 So obviously, my first design wasn’t very good. For one thing, I didn’t realize the importance of those inertial dampeners I mentioned before. I also had some extremely goofy turret placement, meaning I couldn’t really direct my weapons in a hard turn, rendering one turret useless until the nose of the ship got into the right position. On top of that, I just sort of followed the overall tutorial, which told me after a certain point that I had completed the current tutorial step and urged me to go on, without really having a lot of time to consider all of these matters. Luckily, I could hop into build mode any time I wanted and make as many revisions as I wanted to make – so long as I had enough materials, anyway.

And building up a ship seems to be important, since nearly every block used in making a spacecraft adds to overall processing power, which in turn allows more modules to be installed, opening something like the ability to have additional turrets on board. Unfortunately, all those additions and revisions started to run afoul of another system to consider: ship energy. I kind of forgot that spaceships don’t just work but need a power source, and since I was playing in the mode that basically had me starting from basic iron materials, I had to forego all of my visual design choices (such as they were) in favor of clapping giant solar panels all over the craft. I understand these things are fragile, but I also was dead in the water without them.

As in every other survival sandbox, then, my first created thing in Avorion traded form for pure function, as the meager aesthetic decisions I made got covered in giant black paneling so the ship could actually fly. 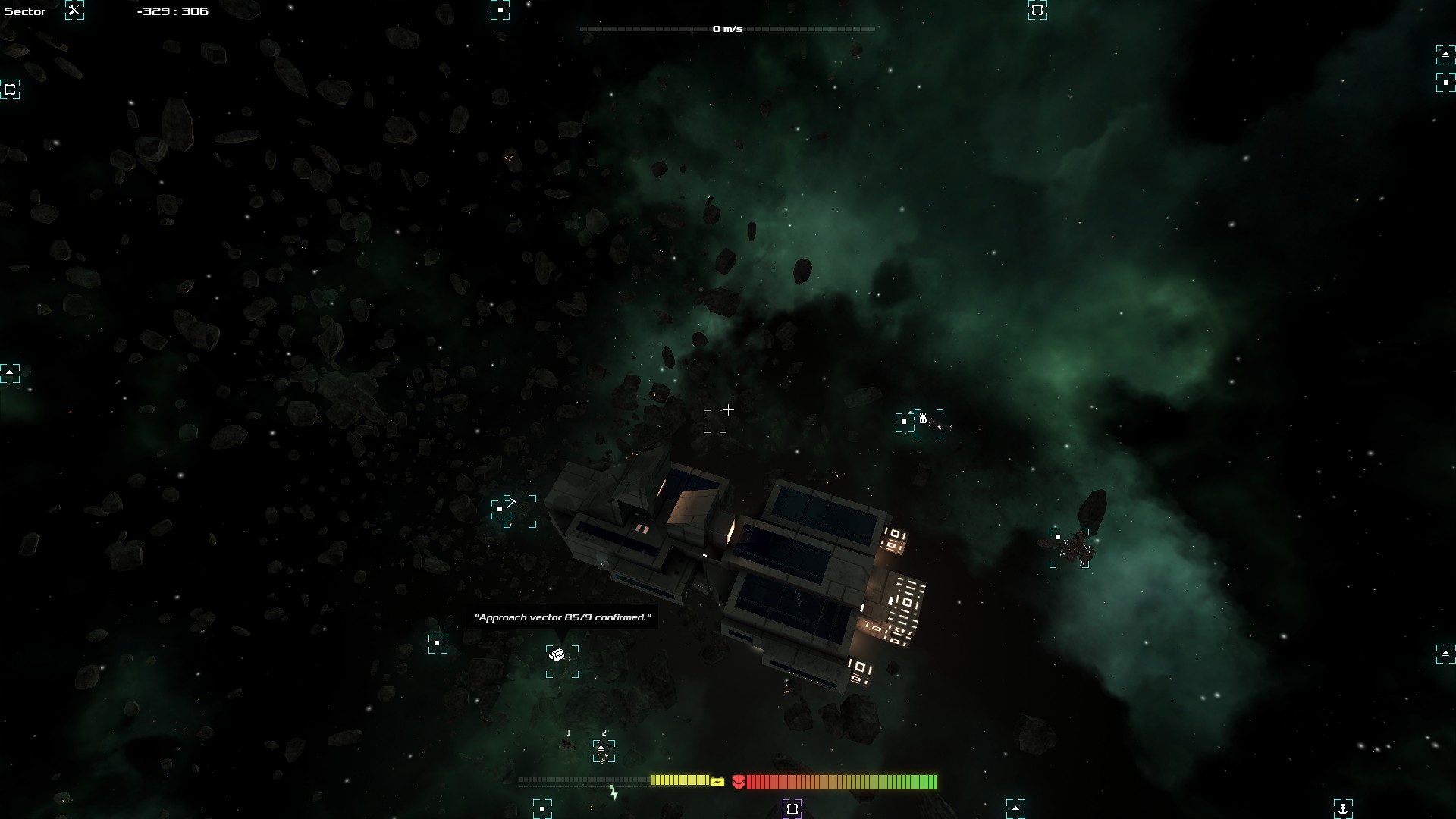 I’m not sure how I feel about Avorion yet, so that effectively means that I should do a couple of polls because I want to give this game at least one more week before I elect to jump over to Elite: Dangerous. So with that in mind, I have a couple of questions to ask you fine folks. First, what mode should I continue to play in?

What mode should I play in for the rest of this time?

Next, I sort of think it’d be a good idea to try to focus on a type of activity. Avorion is pretty sandboxy so I think I have some general directions on where to go. That’s not to suggest I’ll forsake other activities, of course; this is simply a question of where my priorities should like going forward.

What should I focus on in Avorion?

You all know the drill by now: Polls close at 1:00 p.m. EST this coming Friday, November 12th. I’ve got to say, I’m not sure I’ll end up liking Avorion, but I also have to admit that I am a lot more intrigued and curious than I expected I would be.