I won’t lie, the past week has been pretty fun for me. Animal Crossing: New Horizons’ final update added so much to the game. Old favorites like my beloved gyroids and Brewster’s cafe are back, along with new features like cooking and crops (which were essentially introduced with pumpkins last October but vastly expanded in the update). Yes, I know some New Leaf fans will complain that we’re still missing features, but honestly, the biggest appeal of the Animal Crossing series has been going to friends’ virtual worlds, seeing what they do, and interacting in their spaces.

While in-game multiplayer minigames like accessing NES games in the very original game or the Island Tour mini-games in New Leaf were fun, they often felt separate from the main game. Compare this to New Horizons’ Bug Off or Fishing Tournament, which are explicitly multiplayer, or how the timer can track your group’s catches for your own contests, or countless other ideas the games’ expanded online system allows for. New Leaf fans’ complaints can essentially be boiled down to single-player theme-park complaints and reduced options, but update 2.0 feels like it makes the latter moot. While the base ACNH experience gave the series’ multiplayer a great boost, the update alone enhances it. Animal Crossing: Happy Home Paradise, however, solves the single-player content issues better than anything New Leaf did for the series in a way that makes sense for a multiplayer game about decorating and living your best life. 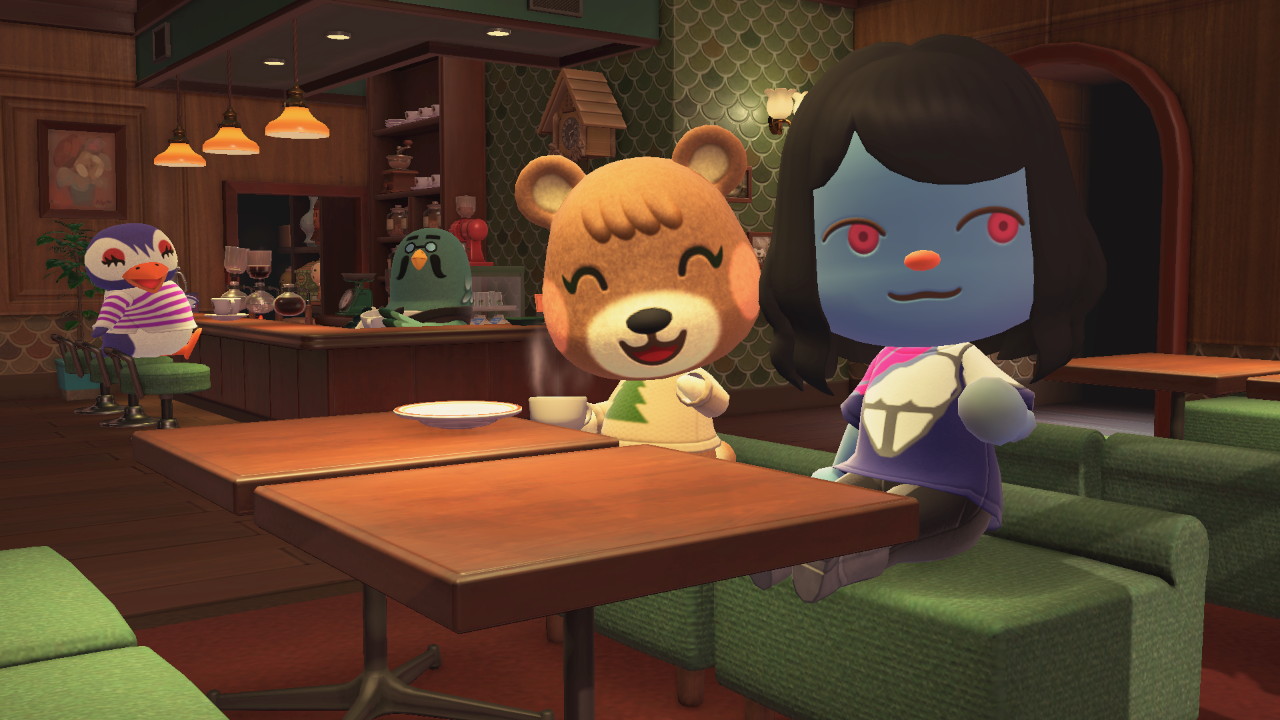 Alone together- the island version

We’ve talked ad nauseam on this site about playing alone together. For new sitegoers, it’s the idea of playing in the same virtual space as others but not exactly doing it together, like soloing your quests in a player-filled zone or managing your bank inventory as your friend starts another dance party in the tavern. Just having other people around while you do things, even virtually, can be relaxing and uplifting. I won’t judge, but I will say that Animal Crossing as a series has been great for this, as you can visit other players’ towns and wish on their falling stars while your host tries to catch a specific fish for the daily.

Happy Home Paradise offers a similar approach but in more of an asynchronous manner. While you go about unlocking cool new things to play with, you can post your work both on Twitter and the game’s in-world version of Instagram (Happy Home Network) that allows you to physically get into the homes/facilities another player’s designed to get a few decorating ideas. For solo players, going through the Happy Home Network (in-game or by using the hashtag) can be similar to visiting a random player’s town without worrying about getting in the host’s way or breaking an unknown rule, but it also allows players to invite other people into their virtual space without the fear of items being stolen or destroyed.

In terms of content, Happy Home Paradise feels more rewarding to a sandbox player than to a themepark fan. Much as in Happy Home Designer, there isn’t a lot structure; there are no hard ratings on how well you design, either from a game logarithm arbitrarily judging your skills or from player ratings. You can simply choose an animal, say you’ll design their home, and then immediately tell them it’s done once you’ve entered their house with minimal decorating (or none once you’ve unlocked the option to suggest themes).

If you love designing and going at your own pace, the tools and assortment of pieces to decorate with are robust, especially with the return of certain series favs and new additions, like the glowing moss stuff. The additional unlocks not only are nice tools, but motivation to go back and enhance your old work. The storyline is thin, but is certainly an improvement over Happy Home Paradise, giving players some solid reasons as to why certain facilities are included. Even better, these facilities are functional and essentially unlock new, simple dailies.

Update 2.0 may not have brought back the barista job you could have at The Roost in New Leaf, but I’d argue HHP offers more value. Like many things in Animal Crossing, even the barista job got stale with time, and I say that as someone who learned a lot of Japanese vocabulary thanks to the game. Designing may do the same, but sandbox players can milk content like that for years, which the Animal Crossing community often does. And I’m someone who has run a small “neighborhood” on and off since the 2008 Animal Crossing: City Folk. 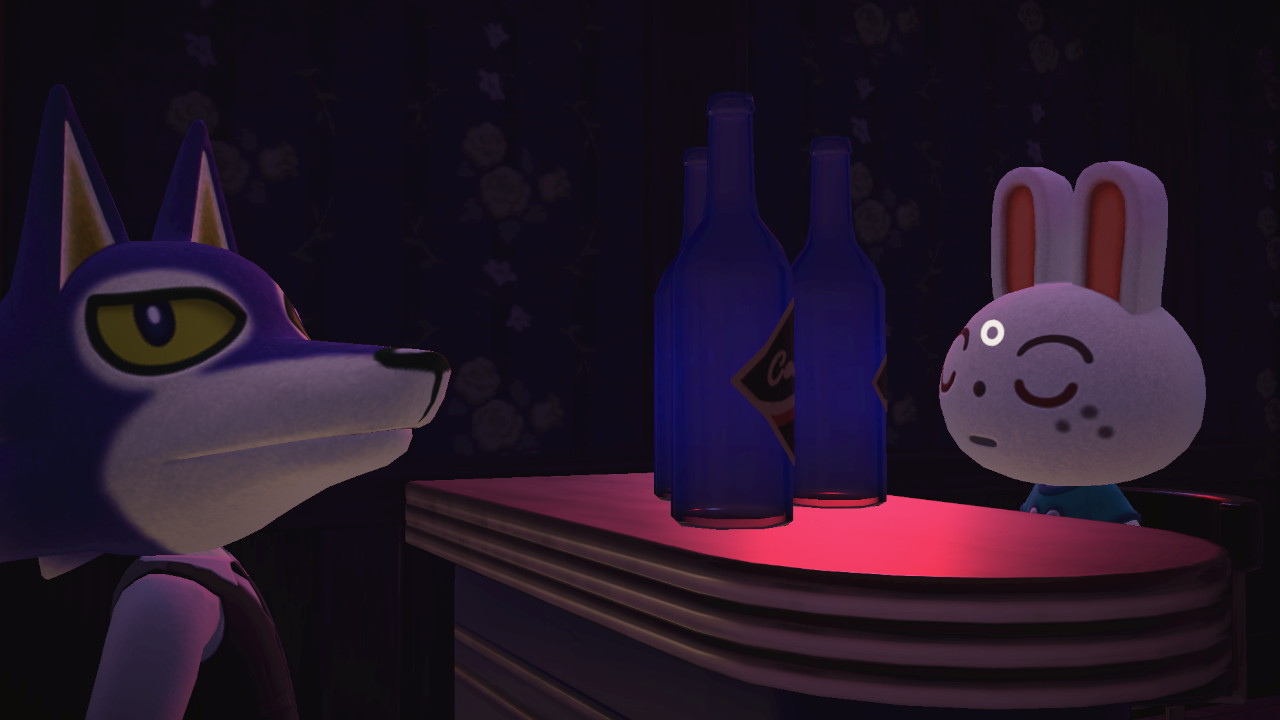 For example, New Leaf “dailies” involved making sure no NPC was trying to move off your island, checking your shops, finding your money rock and fossils/gyroids, and working your coffee gig, with watering flowers possibly on the list as well depending on your ordinance. New Horizons may have many of those still, but it ended our worries about NPCs suddenly leaving us. Nook Miles giving random tasks and a few daily bonuses helps mix up our login activities. Every few hours, our villagers give out a new DIY recipe, which is a great excuse to invite people over. But again, all that can get stale without updates, which the game needed.

Luckily, update 2.0 throws cooking recipes and other new DIYs at you, tosses gyroids back into the mix, and asks us to travel to an island with Kapp’n for potential treasure. Not bad. But Happy Home Paradise asks you to visit the restaurant you made to get a recipe from the chef you put into place. You shop for new clothes at a store where you got to choose what can be sold. The cafe waitresses you hired will change their menu daily. Even though the actions can be simple, you have more of a connection and even agency about your dailies. That’s why HHP makes more sense for single-player content than most of the content we “lost” from New Leaf (aside from my beloved Desert Island Escape, which should come back with an island builder and multiplayer).

For sandbox designers, HHP gives us the most control over designing that we’ve ever had in any game in the series. The return of features like unlimited access to decorating items, sound effects, and ceiling decorations finally being in a core series game are great, don’t get me wrong. But when roommates, particle effects, lighting shade and intensity, free-roaming bugs, and partitions are mixed in, it feels even easier to throw together a story told through decorating, which previously required a good amount of creativity to pull off.

On the multiplayer side, though, you can set up contests, compare notes, create a virtual town on your profile page to share with friends, whatever. But for multiplayer fans, I think things get better once you bring your new skills back to your town. 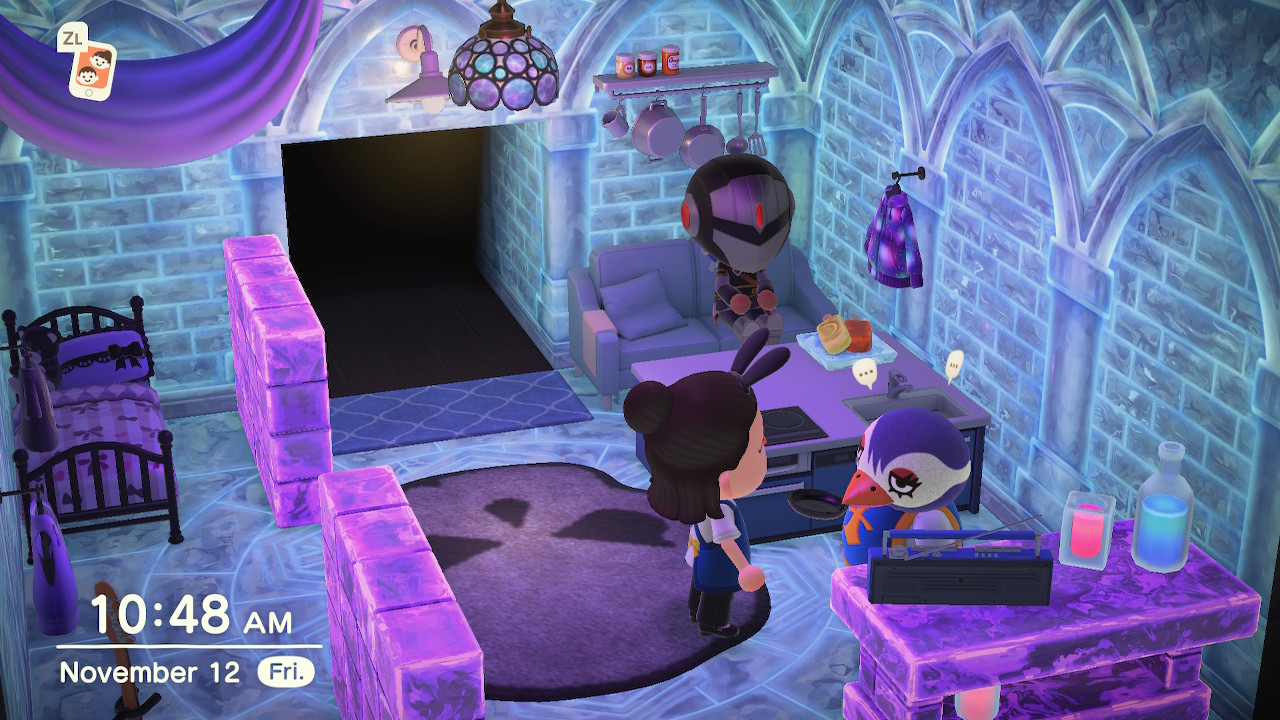 It’s a minor thing, but as much fun as I’ve had with Happy Home Paradise as single-player content, it’s the tools that translate back to the main game that are most impressive.

While I’ve seen (and have done) some good storytelling through Animal Crossing decorations, these additions have given things new depth. My own Asheron’s Call themed town greatly benefited from the update, as “shadows” now have dark clouds, cursed items have a haunting effect, enchanted creatures have a blurry glow, and deadly weapons shine, drawing even more attention to them than the more limited options allowed for previously. Lighting gives better moods, and soundscapes help reinforce your themes.

The design tools you get from purchasing and completing the main storyline for in HHP lets you further develop your home island. My Asheron’s Call theme divided my island into regions based on the cultures of Dereth, and I carefully chose my villagers. Alas, some didn’t want to play along. Large collections of fish replaced skulls and alchemy sets, magic-circle rugs went unused, someone would not put the damn toilet away no matter how much furniture I gave her, and her friends would shamelessly use it during visits.

Those are problems of the past now. While I can’t use custom designs in a villager’s home (like my blood splatter tiles), finally being able to put away theme-breaking furniture is great. My sho-girl, previously stuck in a western-house, now has a more appropriate abode.

But one of the biggest changes is how my town can be traversed. While update 2.0 brought us glow plants and climbable vines, they’re quite rare without purchasing the DLC. A main feature of my town is a central valley divided by a thin mountain range on two sides, to help divide the desert and forest regions from the valley swamp. Most players don’t run around with a ladder, and while there are cuts in the mountain to speed up travel, it’s still inconvenient for most people who haven’t learned my fast travel system (thank you, pipes).

Thematically, the vines just feel more MMO-y to me. I can’t say I’ve ever had a ladder as a usable item in an MMO, but I’ve climbed a lot of vines. While a player who lacks HHP can either time travel to cheat to find vines, the DLC gave me good access to them, which has really changed the overall feel of my town. The sense of adventure, magnitude, and various regions are preserved, but the fluidity of climbing mountains helps impatient players better appreciate the design. Glow plants help give a stronger emphasis that my island, Nu Dereth is a place of magic, but the magical glows serve more as a warning of the darkness waiting on the mountain.

Animal Crossing: New Horizons’ update 2.0 added plenty of cool new things for players to tool around with. The new items alone have been brilliant. But Happy Home Paradise gives easier access to those items, allowing DLC purchasers to help their less fortunate friends fill out their catalogs faster. Designers in particular are highly rewarded by picking up HHP, as the new tools can be used in small, one-off islands or brought back to the main island to be shared in a direct multiplayer setting. If players want daily minigames to do over-and-over again, New Horizons will still disappoint, but the update brings new things to discover, while the DLC gives you new ways to do them.

Choose My Adventure: Going back to Guild Wars 2 basics through...