You know how your first construction job in a survival sandbox is a perfectly functional but spectacularly hideous in terms of aesthetics? That was my first major created ship in Avorion, a hideous beast of a thing that served its purpose extremely well and also taught me a lot along the way.

It took me a little bit to put together my death brick, however. For one thing, it took me an entire different ship build. Technically my second crafted ship, this one was trying a bit too hard to look like a functional spaceship as I got mired in the different block shapes I could use, the different sizing and rotational effects I could apply, and the use of things like mirroring to make achieving symmetry possible. 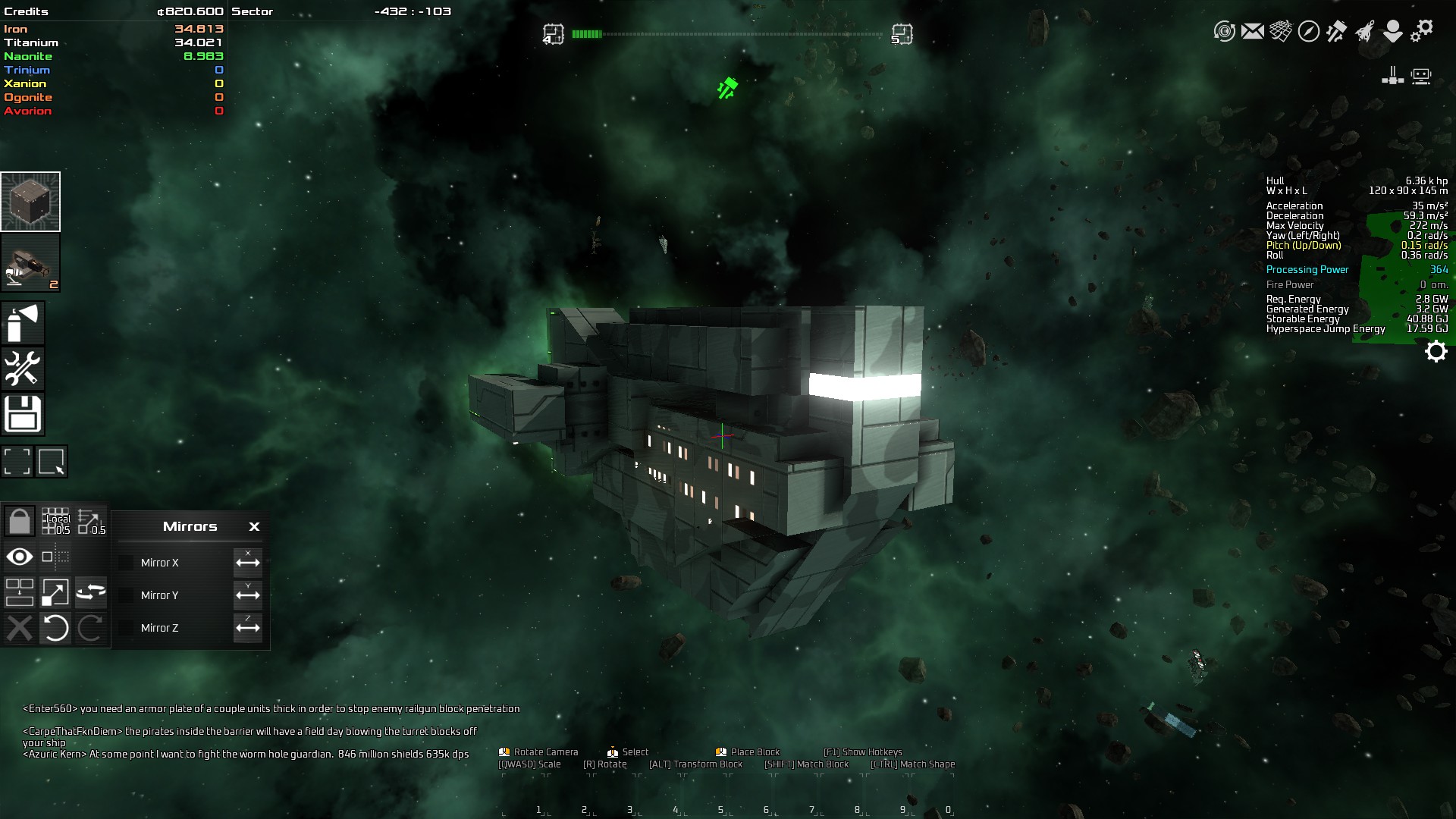 I don’t think I fully communicated how powerful the ship building tools in Avorion are. Even with the limited, angular, and boxy designs that you pretty much can get away with – these ships are far less sleek designs and more like LEGO crafts – there seems to be a lot of room to be creative here. Judging by many of the created ships and stations that pepper the loading screens in this game, anyway.

The problem that I ran into here, however, was that I was focusing far too much on the building design and not the actual functional design. The ship looked… well, I can’t say it looked good, but it at least looked like a solid try at creating a spaceship. More to the point, however, it wasn’t really effective at being a spaceship. I only had enough power to keep things functional but not optimal, meaning my power recharge was absolutely abysmal. I also didn’t really do a great job of putting down thrusters and gyros, so the ship didn’t turn particularly well. Finally, when it was put to the test in combat, it didn’t fare so well.

So back to the drawing board again. By way of explosion. 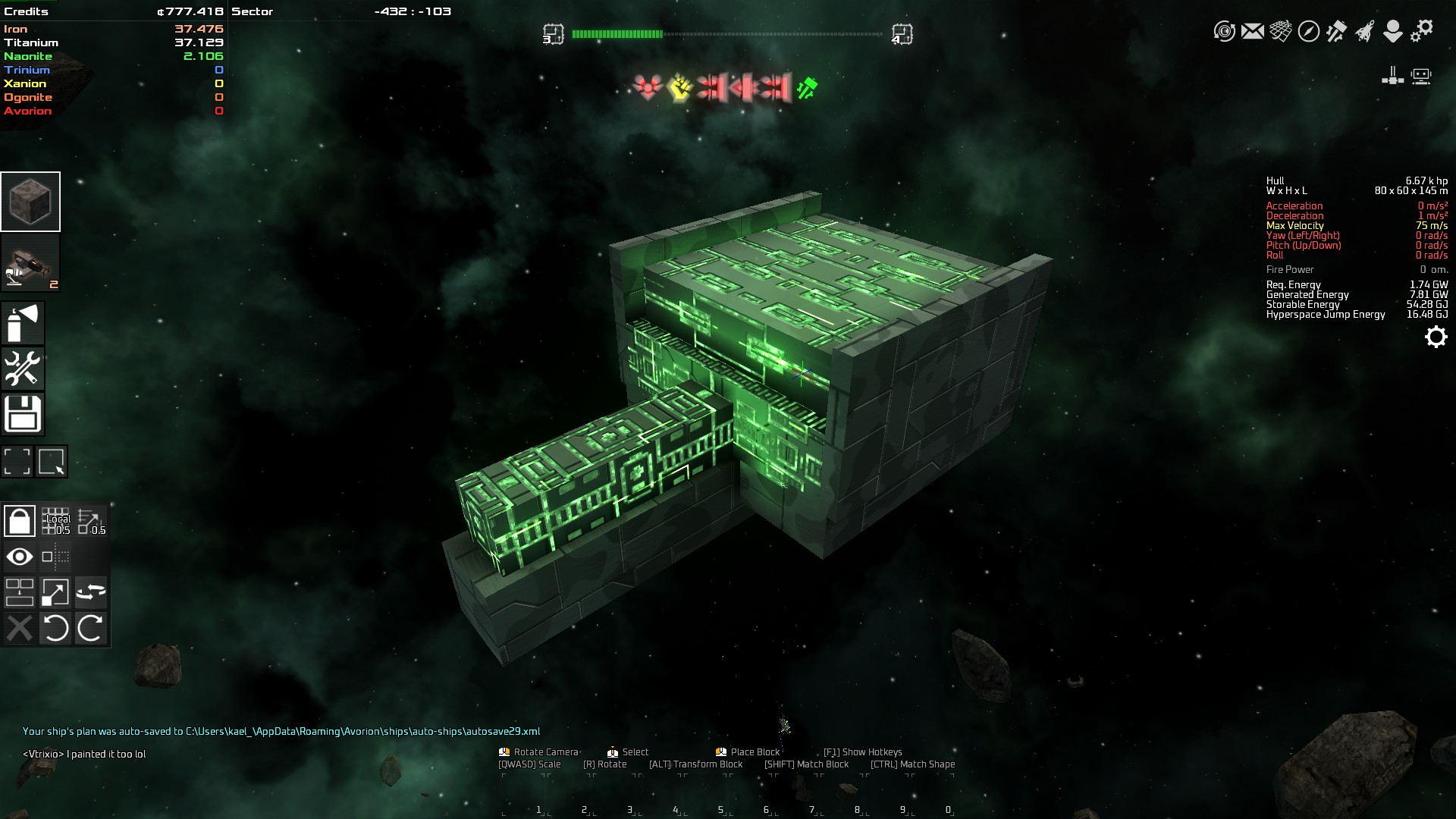 After a day away from the game, I started to actually think about my next build while I was doing something else. I started to consider that maybe I should build a basic foundational structure first – something that would house enough generators to power and shield the ship effectively, and then build a shell around that. You know, probably like actual shipwrights do. Motivated by my “revelation,” I set to work.

Starting with a platform, I put together a giant power plant, a nice long battery to add more battery life, then surrounded those pieces in blocks that improved their rigidity. On top of that I put in a shield generator, then extending from that I made a warp core that seemed like it would suit my needs while not using all of the material I had assigned to the task. Once done, I wrapped the rudimentary engine room in a layer of armor.

I had my base. Time to build outward over it. I added crew quarters. I tacked on lots more armor. I placed engines, thrusters, gyros, lateral thrusters, dampeners, and finally as many turrets as I could manage – namely two combat turrets and one mining laser. It was purely designed for function. A test bed for whether I had taken the right steps in terms of ship building. And it seemed to have worked, though at the expense of ship design. I effectively crafted a lumbering space building. 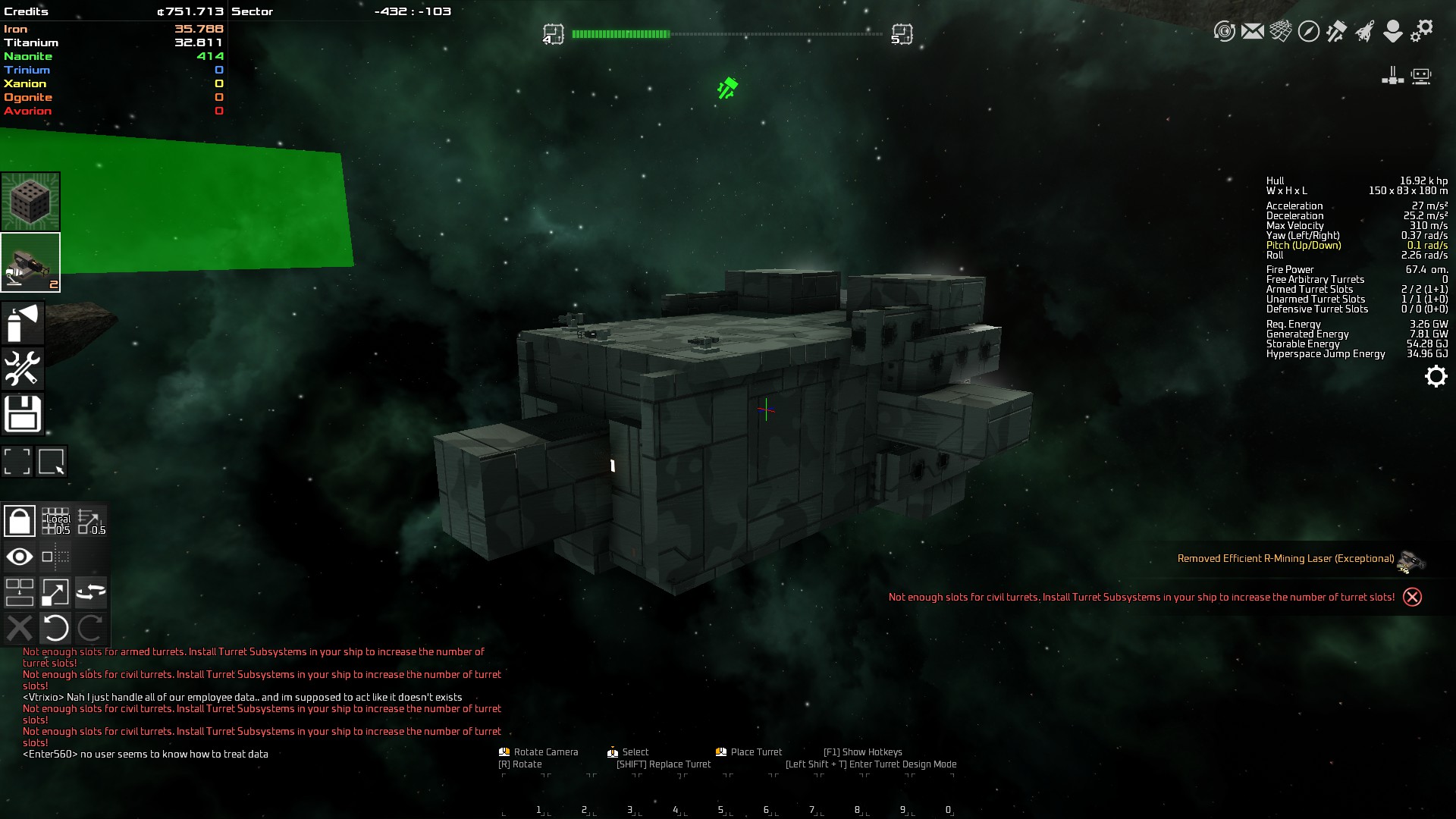 My tinkering was extremely educational, however. For one thing, I think I was getting a handle on how to apply thrusters to the ship, making it turn pretty easily. For the most part, anyway. This thing was still extremely slippery, which means I think I didn’t put enough dampeners on it. Also, I was doing alright with yaw but not well with pitch; turning left and right was a lot more responsive than turning up or down.

The best way for me to test that, however, was through the crucible of combat, so I jumped around the map to find something to shoot at. Lucky for me, some pirates were opening fire on a mining vessel so I leaped in to action. Slowly. It was a slow-motion leap.

When I did close to firing range, however, I realized that I had managed to put together a tank. It had almost no major damage output but its shields were so thick and its armor was so massive that I was able to take out three enemies each sporting way more guns than I had through sheer attrition. They outmaneuvered me, but I could simply sit there and take the hit like a Hutt fighting a fly. This brought me no end of laughs, I have to admit. And then when I got some outstanding drops from some more pirates that allowed me to fit a total of five weapons batteries at once, my smile only grew wider. I didn’t make a spaceship; I make an Ork Boyz dakka platform. Moar gunz, boiz! 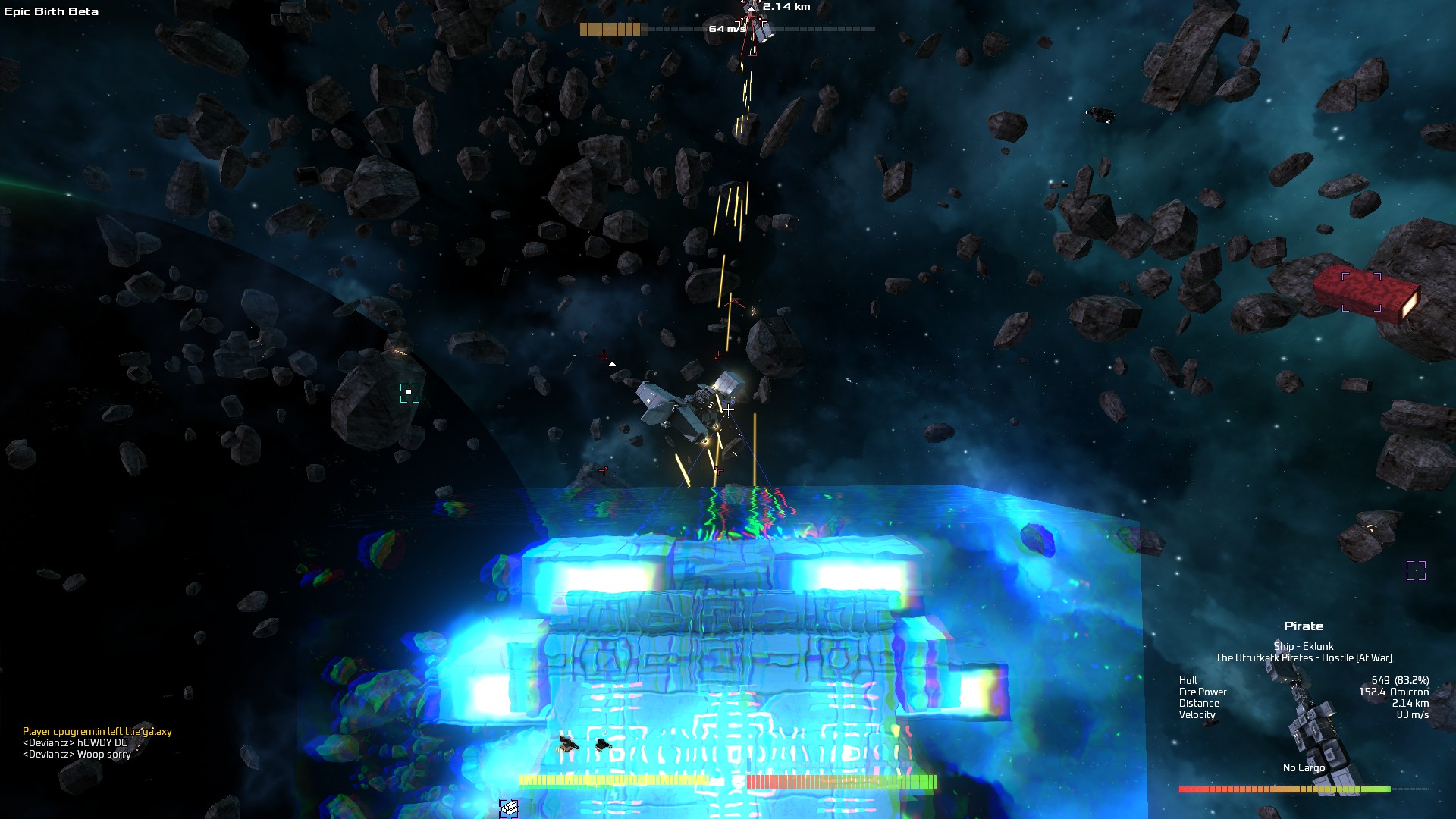 This leads me to think that, if I’m left to my own devices – if I play this game in creative mode, doing nothing more than building and test flying ships – I would probably have a lot of fun. And maybe I would get better at it all, too. Maybe I would even manage to put together designs worthy of being shared in the Steam Workshop eventually. It’s an intriguing thought, and though there’s probably way more to Avorion than simply putting together ships, I think I found the activity I care about. After all, I used to play Spore primarily by building a compliment of spaceships for an empire and barely touched the regular game at all.

So this is a long way of saying that I’m moving on from Avorion. I’ve had my fun, I’ve learned a bit about ship design and creation, and I found what’s probably going to be a source of random amusement now and again. I will always remember you, giant cumbersome space brick with too many guns on it. Or, in true Ork fashion, not enough guns. It’s time to choose my next game.

Where should I go next? Choose My Adventure! 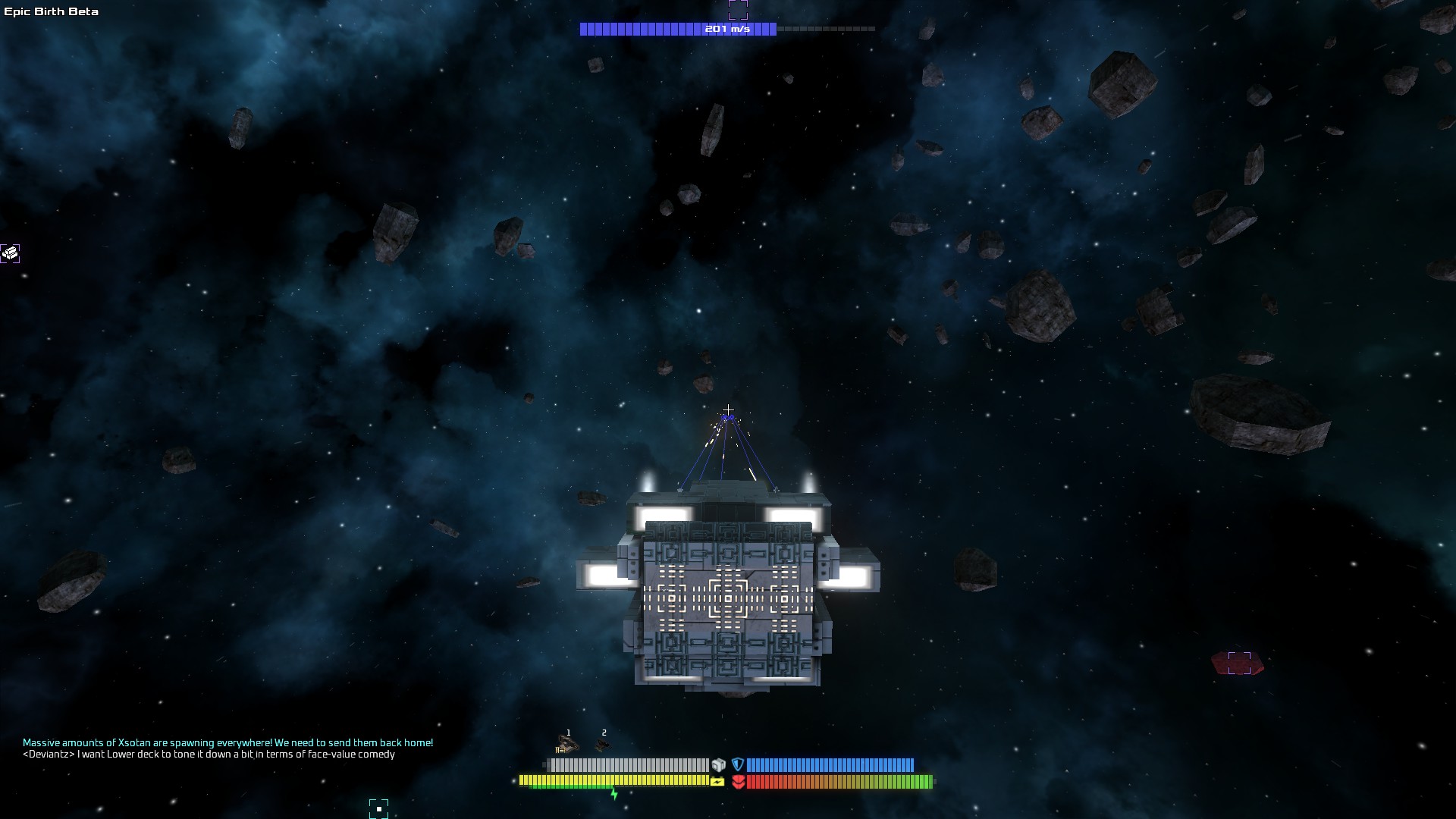 As usual, polling will be wrapped up at 1:00 p.m. EST this coming Friday, November 26th. I’m glad that this game was chosen. Who knew that making spaceships would be this much work and be this interesting?