We regret to inform you that Bobby Kotick is still the CEO of Activision-Blizzard at the time of this writing. What has changed, on the other hand, is that Jessica Gonzalez – one of the major organizers behind A Better ABK, the worker group pushing for unionization and improvements to corporate culture – has announced she is leaving the company as of December 10th, with her announcement stating that she will be taking on a senior quality engineering role with a financial company and moving out of the game development sector entirely.

Gonzalez shared her farewell message on Twitter, stating that she fully believes that it is possible for Activision Blizzard to be a good place to work and for the employees there to continue organizing and improve the working conditions of the area. While she appreciates the work left to be done, she frames her ultimate decision to leave as being a matter of putting her own health first. She also has some last parting words for Bobby Kotick, once again citing the need for him to be removed from his position:

Your inaction and refusal to take accountability is driving out great talent and the products will suffer until you are removed from your position as CEO. This may seem harsh, but you had years to fix the culture and look at where the company currently stands.

Activision-Blizzard’s stock value continues to slip, with the company’s stock having lost almost 40% of its value over the past six months. These losses began and have continued before the Omicron variant of Covid-19 was detected, though that certainly hasn’t helped. 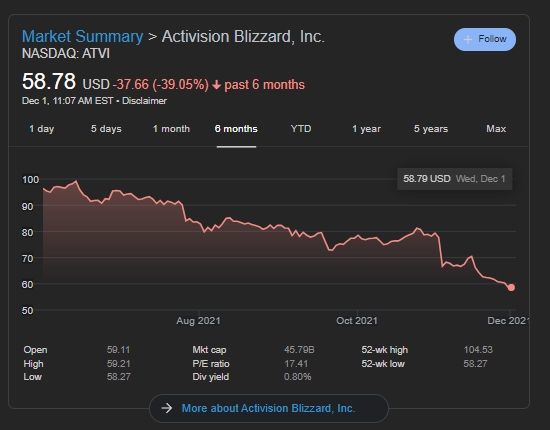 My resignation from Blizzard Entertainment pic.twitter.com/eJeTsYGFv8

Source: Twitter
Activision-Blizzard is considered a controversial company in the MMO and gaming space owing to a long string of scandals over the last few years, including the Blitzchung boycott, mass layoffs, labor disputes, and executive pay fiasco. In the summer of 2021, the company was sued by the state of California for fostering a work environment riddled with sexual harassment and discrimination, the disastrous corporate response to which has further compounded Blizzard’s ongoing pipeline issues and the widespread perception that its online games are in decline. As of fall 2021, multiple state and federal agencies are currently investigating the company and the industry has called for Bobby Kotick’s resignation following fresh reports on his misdeeds.
Advertisement