So, apparently, I was being hung to strangle out a demon. But I got better.

This is the opening section of Grim Dawn, and boy howdy is that the most appropriate game title I had ever heard of in my life. This game absolutely lays it out from the very off: It’s all about the grimdark doomy death with a color palate that doesn’t seem to stray very far from brown as near as I could tell.

But I’m getting ahead of myself, of course. I’ve made only a couple of steps into the game, after all, and I would have made more but for the fact that I had a choice almost immediately come to mind. Still, I figured a little bit of time to get acclimated to how Grim Dawn operates would be a good idea. And that starts by following the only quest line that was offered to me. 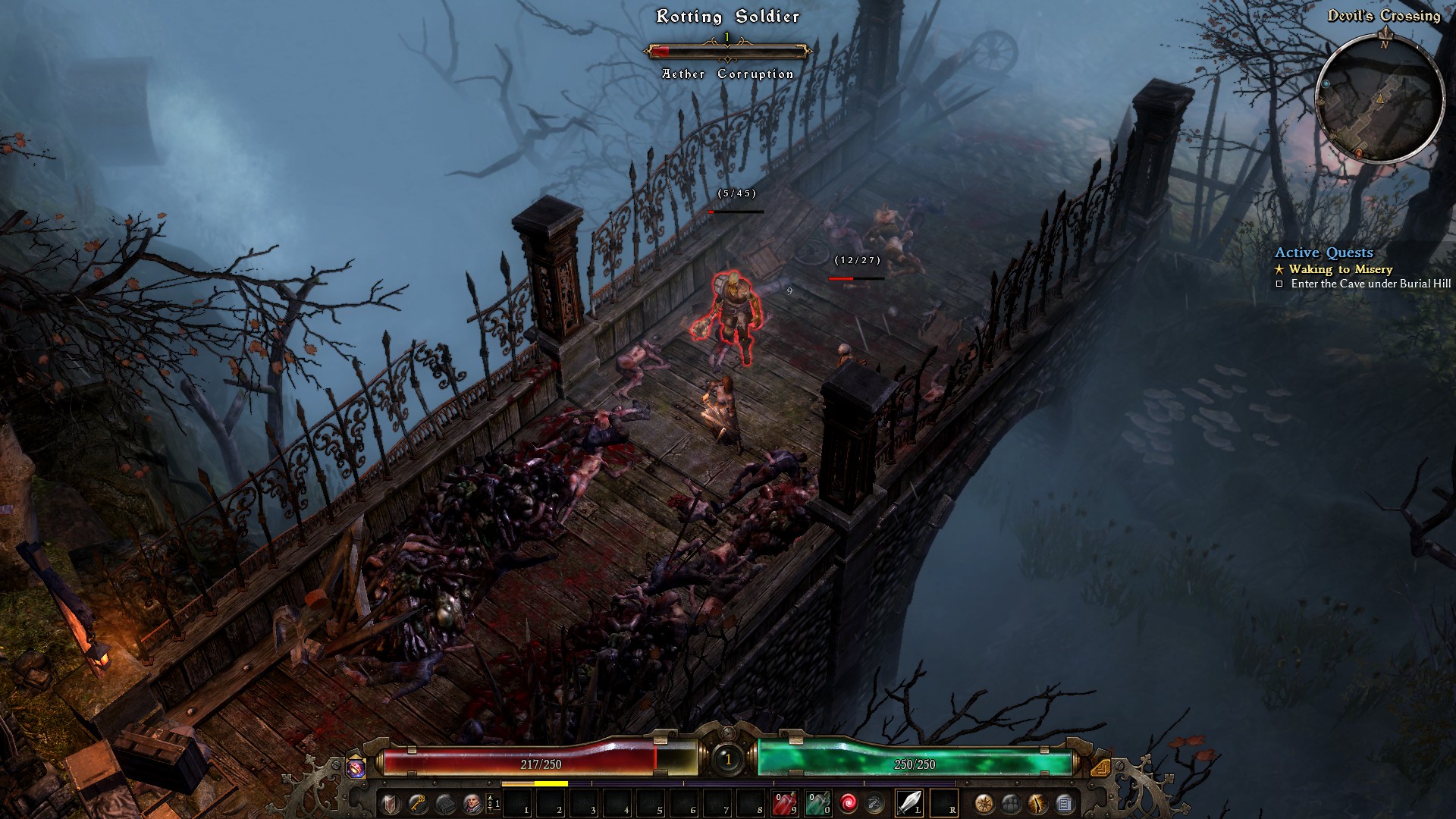 After getting over the simple matter of being hung, I’m effectively pressganged into service with the captain of what I can only assume is a local militia. The idea is, as one of the starting NPCs put it, to use me as someone expendable, with nothing to lose but everything to gain, against a horde of zombies that are terrorizing the populace.

Combat most certainly is holding no surprises from me in the ARPG mold, nor is controlling my character – my dreaded click-to-move control scheme has once again surged up because apparently ARPG devs are incapable of shaking the albatross of such a stupid control mode around their necks. That said, at least I was able to hold shift and keep my stupid character still, swinging her weapon away as zombies idiotically shambled into melee range. So far, so humdrum and not unique.

There is one unique mechanic that immediate leaped out at me, and that was the constitution mechanic. Yes, I’ve got a health bar that gets whacked away, but healing isn’t necessarily a matter of slugging back potions while madly flailing my weapon like some drunken bar brawling murder hobo. Stepping out of a fight for a little bit saw the constitution bar that overlays my health bar drain, healing my health in the process. This made a lot of the initial fights feel kind of trivial, as I could simply kite foes around for a couple of seconds to wait for my constitution to regen my health before I stepped into the fray. 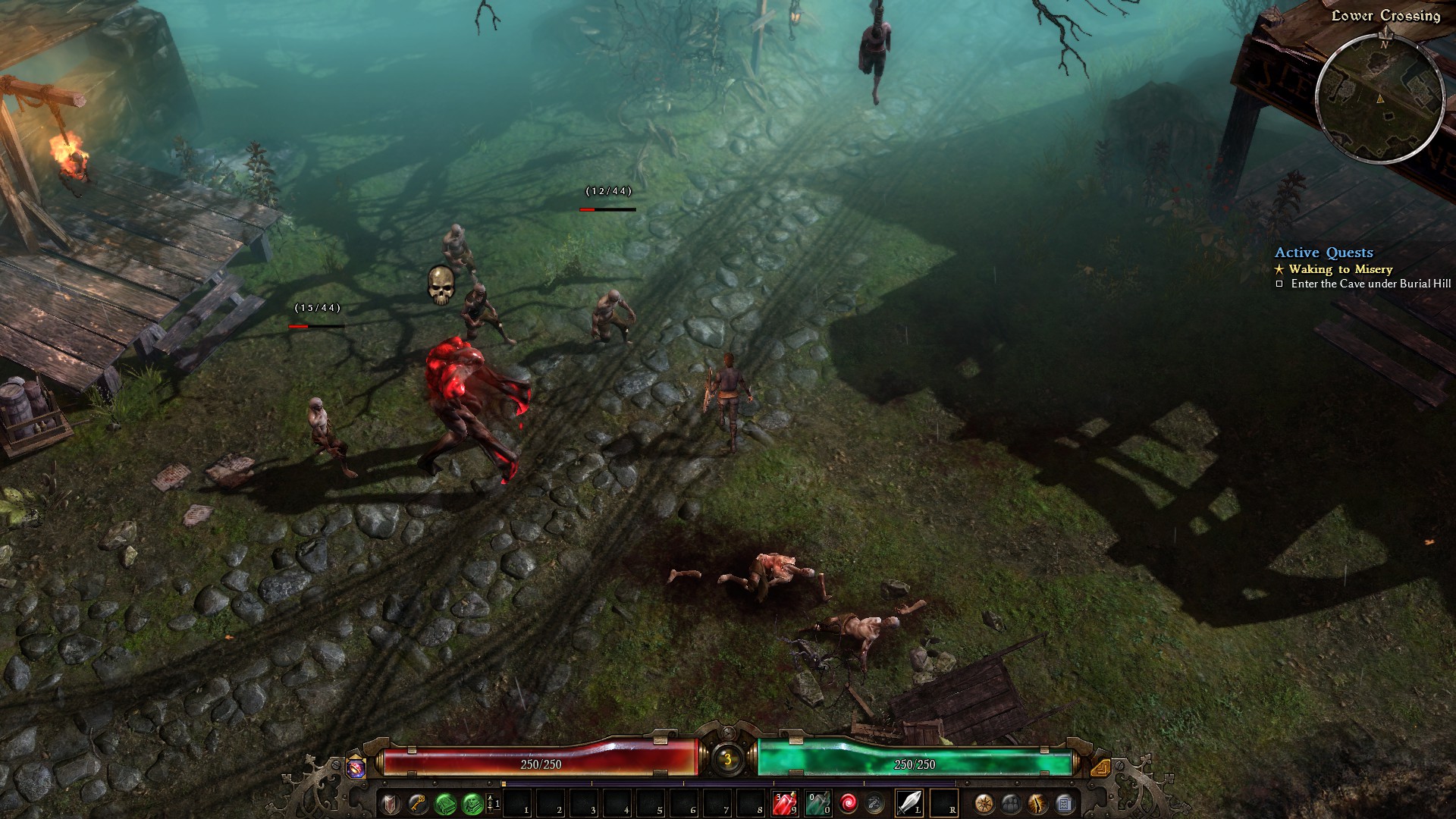 This was pretty useful in the early going, as at one point while I was headed to my quest objective I was besieged by a whole bunch of zombies. Shortly after that, I was once more beleaguered by a boss monster and additional zombies that kept on coming so long as the boss monster was alive. This kind of annoyed me a bit; bosses that can just constantly bring waves of trash mobs at you isn’t difficulty, it’s boring and lazy. Still, slurping up the constitution bar saw me win the day, even as I was avoiding spending skill points and choosing a class.

Yes, I was doing this all in the starting gear. Because I’m an idiot. And I was trying to summon something like fun. Also I just wanted to see how far I could push the envelope.

Turns out, the envelope was pushed too far when I finally got to my stated objective – a cavern that was the source of all of the rising dead. Once again I was flooded with bunches of slow-moving zombies and had to hack my way through until I got to a boss that I’m pretty sure was still summoning zombies on top of throwing exploding crystals at me. Things were starting to get hilariously hairy at this point, as I was slowly whittling away at the boss’ massive health pool and weaving my way through the zombie throngs. Eventually, though, my strategy of stupidity was starting to fail as my constitution bar was drained, and even though I had munched on some rations that I found on the cavern floor (ew), I could see that continuing this whole thing was a losing proposition. 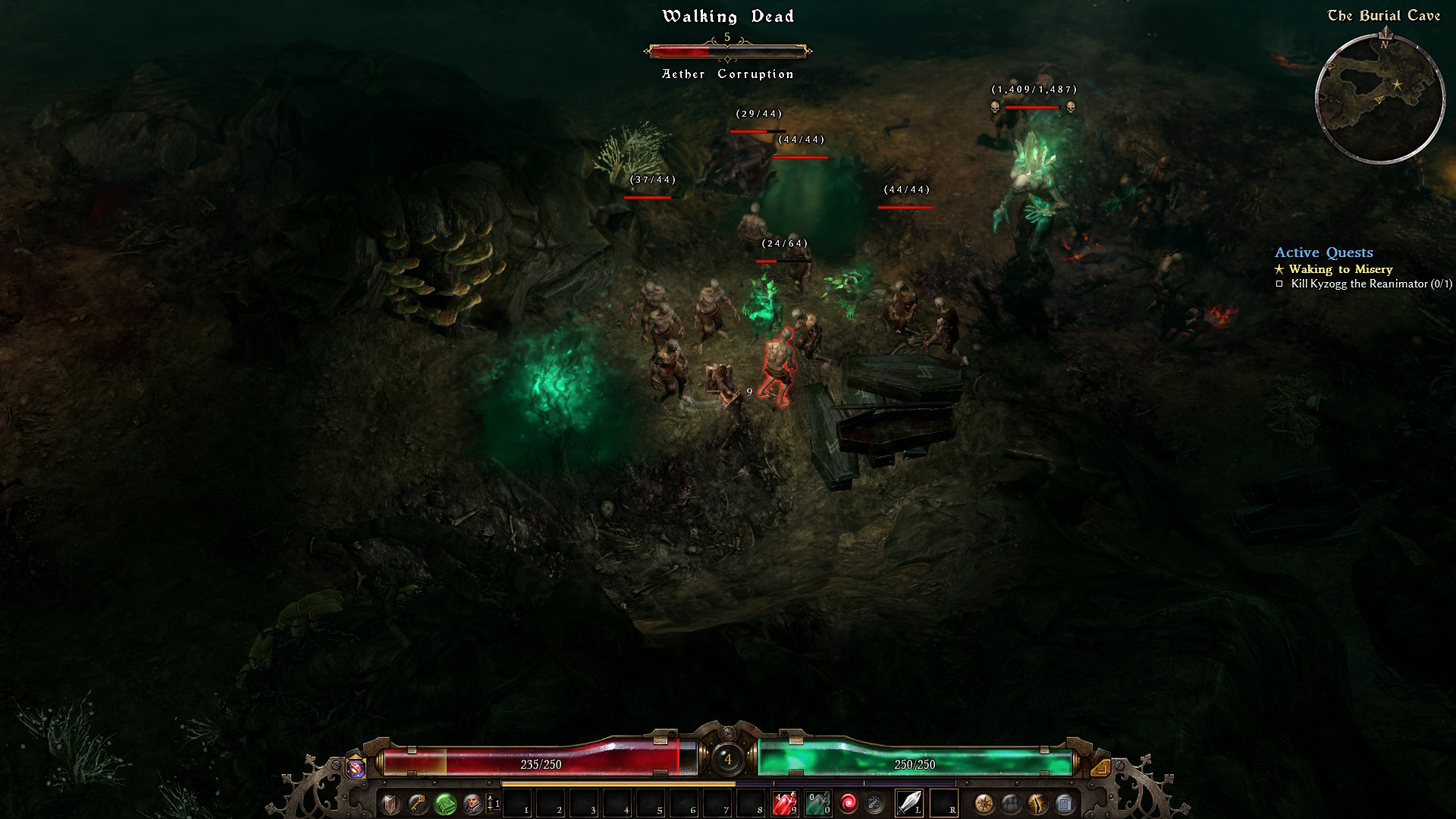 So that was the first tentative steps into Grim Dawn and already I can feel that this one is probably going to be stupendously boring. Still, I am going to push forward for a little while yet, especially since the game’s progression system seems… possibly interesting? It’s a constellation of stars that amount to incremental stat boosts as far as I can tell. Wee.

I apologize if this sounds pessimistic, but it’s probably because this game already feels like a boring rehash of every other ARPG I’ve tried out. I get the impression that Crate Entertainment just wanted to make a new Diablo II, so this all feels less like a unique game and more like I’m playing someone’s overdramatic and hyper-dark fanfiction. Still, I will move on for at least a bit longer, and that means finally settling on a class. Which, naturally, means this week’s poll. Fans of Grim Dawn will notice that I left a couple of class choices out because they sound either boring or annoying or both. I’m trying to squeeze some enjoyment out of this grimdark little lemon.

What class should I try in Grim Dawn? 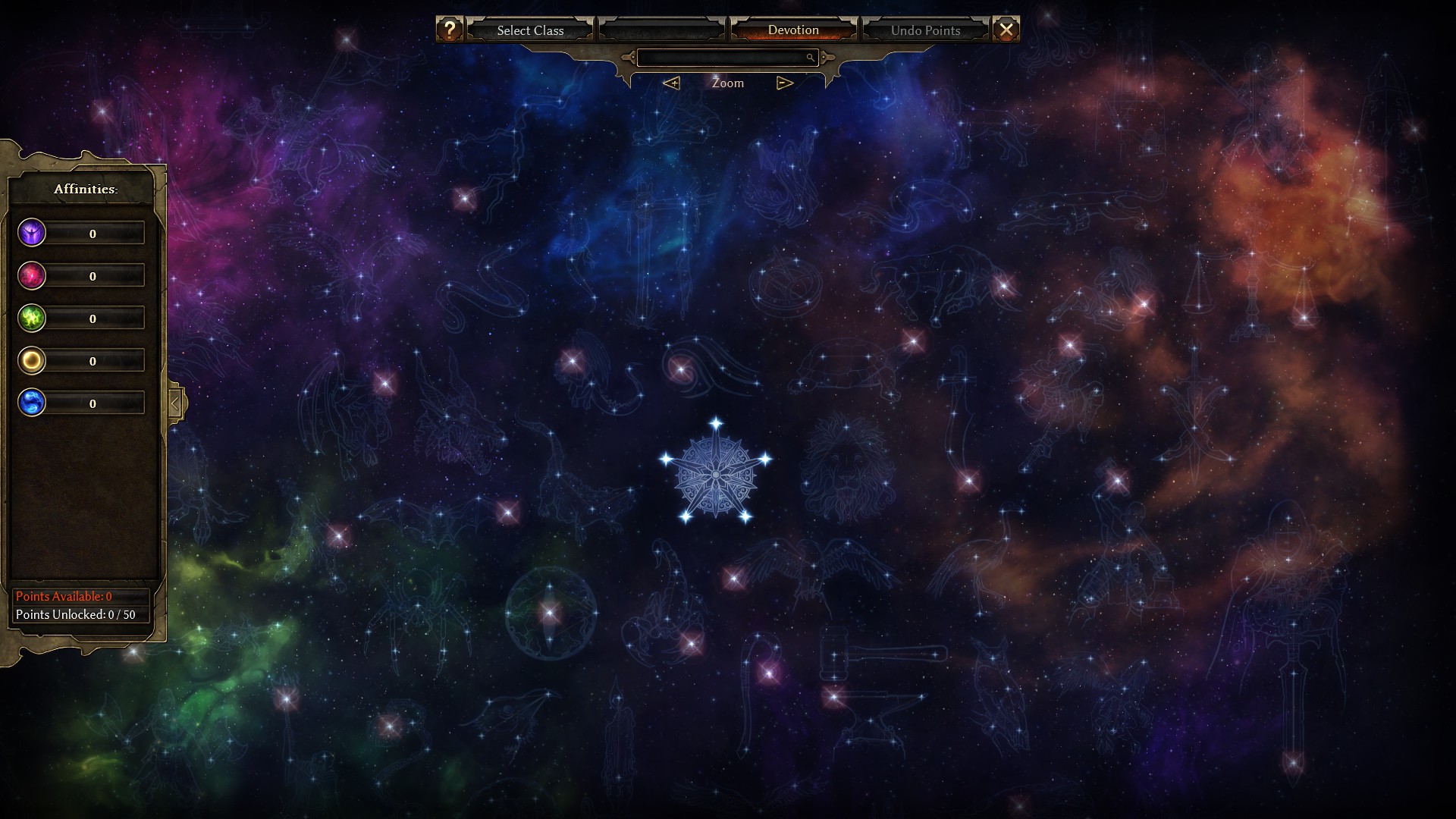 As per usual, polling will close up at 1:00 p.m. EST this coming Friday, December 10th. Until then, I am going to put this thing on a very high shelf to collect dust. Hopefully my mood will improve and my first impressions will be scrubbed away. But frankly, I’m not holding out a lot of hope for this one. I’m hoping time will tell, though.