One of the best things that can happen to me in video gaming is to be proven wrong. To be surprised by how wildly incorrect my first impressions can be. I try not to absorb those mistakes as failures necessarily, but as delights. And that’s kind of where I’m at with Grim Dawn all of a sudden.

I still contend that the opening beats of this ARPG did not exactly impress me – I’m still not sure I give a whit about this world, owing to how fast I find myself blipping past the quest text – but the actual gameplay of Grim Dawn is way more interesting and tightly done than I expected. 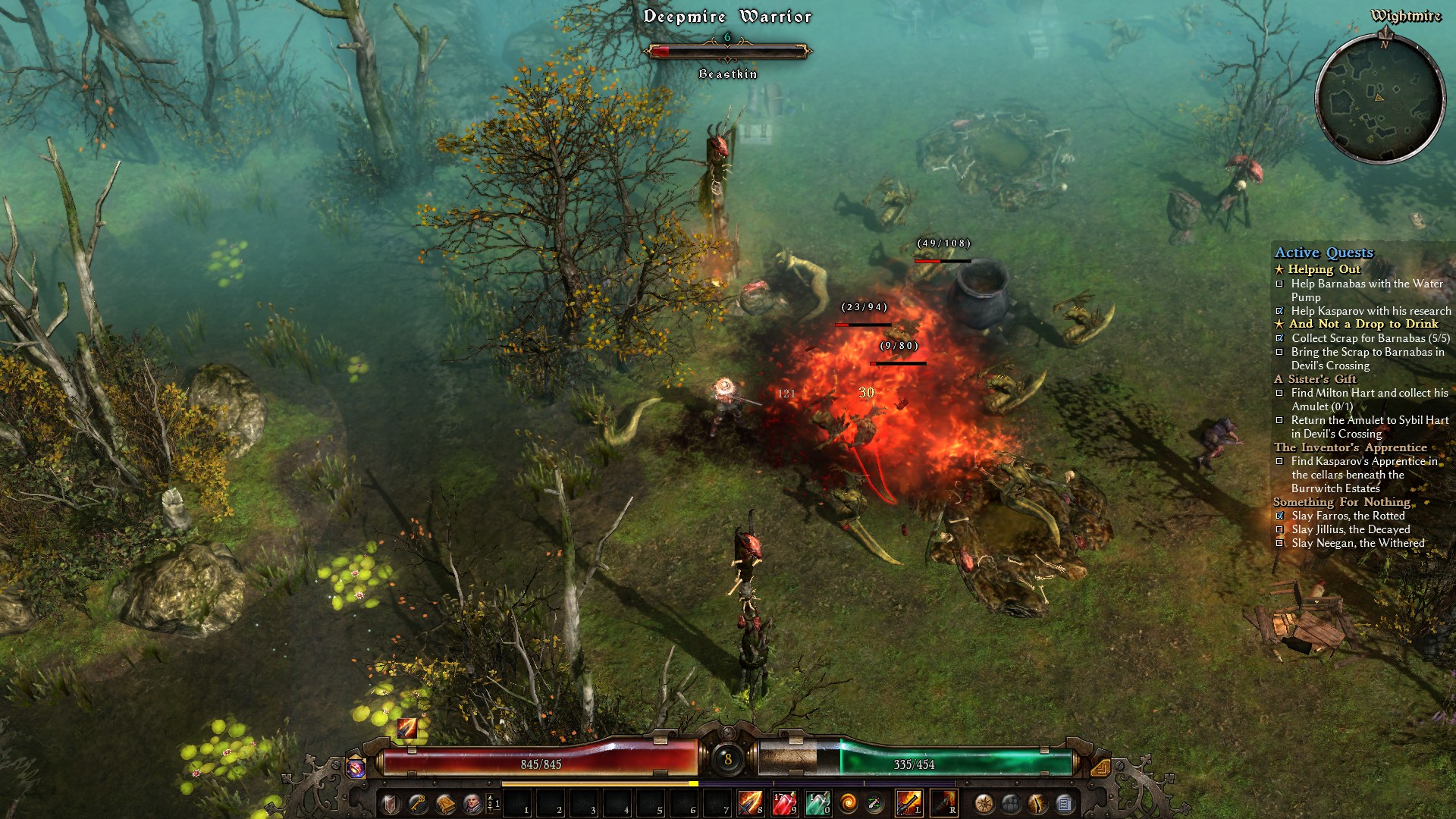 Perhaps unsurprisingly, that boils down to my chosen class (or rather the class chosen for me). I was certain that the Shaman was going to win out, but the voting saw the Demolitionist inch its way forward, and boy am I glad it did.

For one thing, I tend to like ranged classes in ARPGs just a bit more, and once I finally got a dropped pistol and unlocked a couple of skills for the new class, things got far more engaging. I elected to follow the fire-filled tree at the top of the Demolitionist’s skillset, which was once again another pretty good choice for me. I mean, if I’m fighting undead, fire is a good solution, right?

As much as I might have enjoyed doing ranged attacking as I re-entered the cavern with my first major boss fight, I still found that fight rather annoying, as it once again was leaning into having constant adds summoned and an obscene health pool to whittle down. Having to reposition myself with click-to-move controls just annoys me. I can’t change me here. And, really, the game won’t change itself either, so we both just made the most of it. 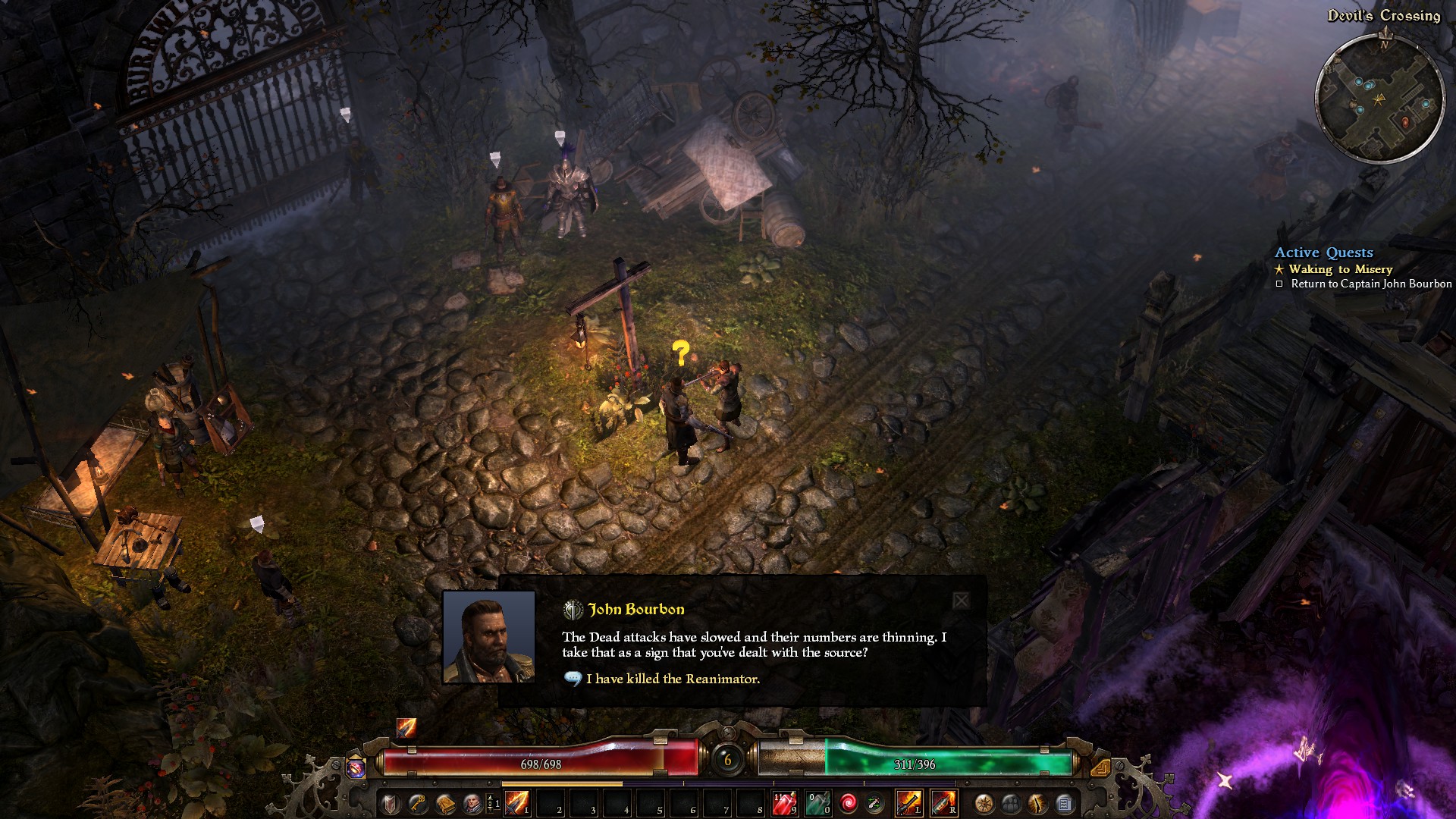 One of the best parts of this game, though, is the satisfying little showers of loot. Better yet, it seems like the loot I was getting was appropriate for my class, or at least had a few items that were of use to me. I had to pour a couple of points into constitution in order to effectively put on a chest piece, but I’m starting to believe that cunning is the more important stat. Those are my primary stat point spending foci for now, anyway.

Things got even better as I picked up a musket and started to unleash long distance, one-shot hell on fools. I suddenly felt way more powerful with the right kit, and combat started to be enjoyable. This was helped by the fact that I was mostly spending the skill points I was getting in improving my chosen abilities. I started off with the basic fire-filled standard attack, then picked up the fiery aura skill, and accidentally got the fire bomb skill. Turns out, though, that the fire aura skill was the mistake and the firebomb button was far more important to my current ranged build. I still keep the fire aura on just in case, though.

At a certain point I had the compulsion to stop spending my points in jacking up my chosen skills and instead spent those points in advancing the tree to open up more buttons to push. Finding the right balance between whether to improve selected abilities or open up more abilities seems to be the name of the advancement game, which makes for a bit of analysis paralysis on my end. At one point I “risked” my points to add something that improved my fire bomb and it ended up being a good choice; I now couldn’t throw the bomb as much as I used to, but the bomb now had a huge fire pool effect and it seems to do way more damage. 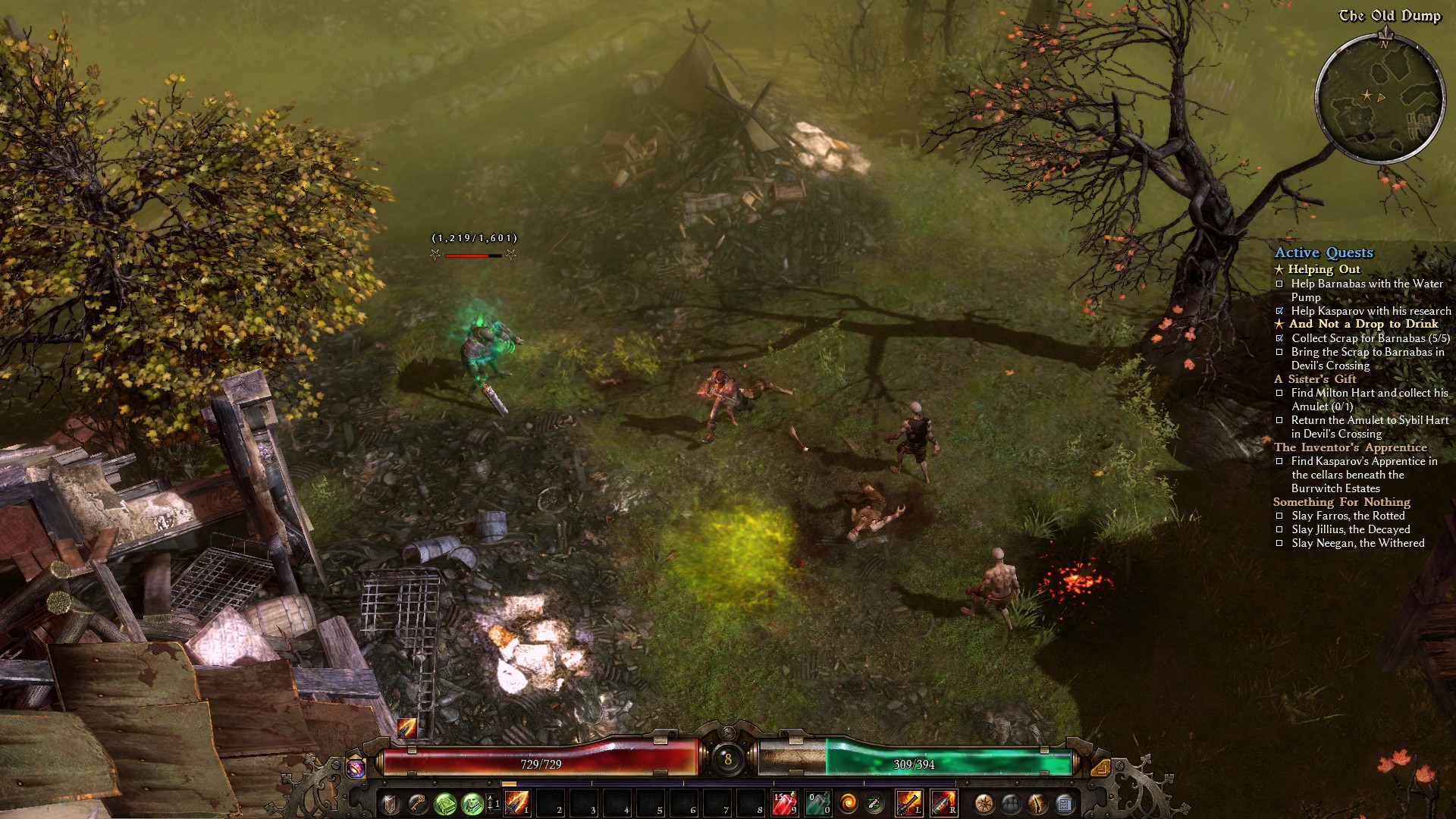 The one advancement system I’m not really sold on quiet yet, though, is the Devotion system, which represents passive boosts. Unlocking these points isn’t a matter of leveling up so much as finding shrines to earn the opportunity to unlock stars in the sky. Once again, it feels like just those little drips and drabs of slight power improvement, and finding those shrines doesn’t seem like a particularly engaging mechanic to me, but time will tell. After all, I was clearly wrong in my initial impressions of Grim Dawn before.

Now that I felt more empowered and found a playstyle I was jiving with, I found myself looking forward to roaming around this awful hellscape of a game world and discover things. Naturally, I plucked a whole bunch of side quests before venturing out, but most of my remaining time was spent slowly opening up the map and exploring. The waymarks to my quest objectives weren’t really popping out at me anyway, and I was having fun popping shots off.

During my rambling I managed across another accidental side quest objective against my next major boss. This time around all I had to contend with was another giant health pool and far more interesting attack patterns. This boss didn’t have adds rushing me down and instead had some skills that forced me to move a lot more than I expected. One of this thing’s attacks fired off giant spikes of poison in big directions, which made me either move out of the way or find cover. I’m not used to needing cover in my ARPGs; I’m used to just facetanking and knocking back potions. Consider me impressed that I had to be a little smarter, then. 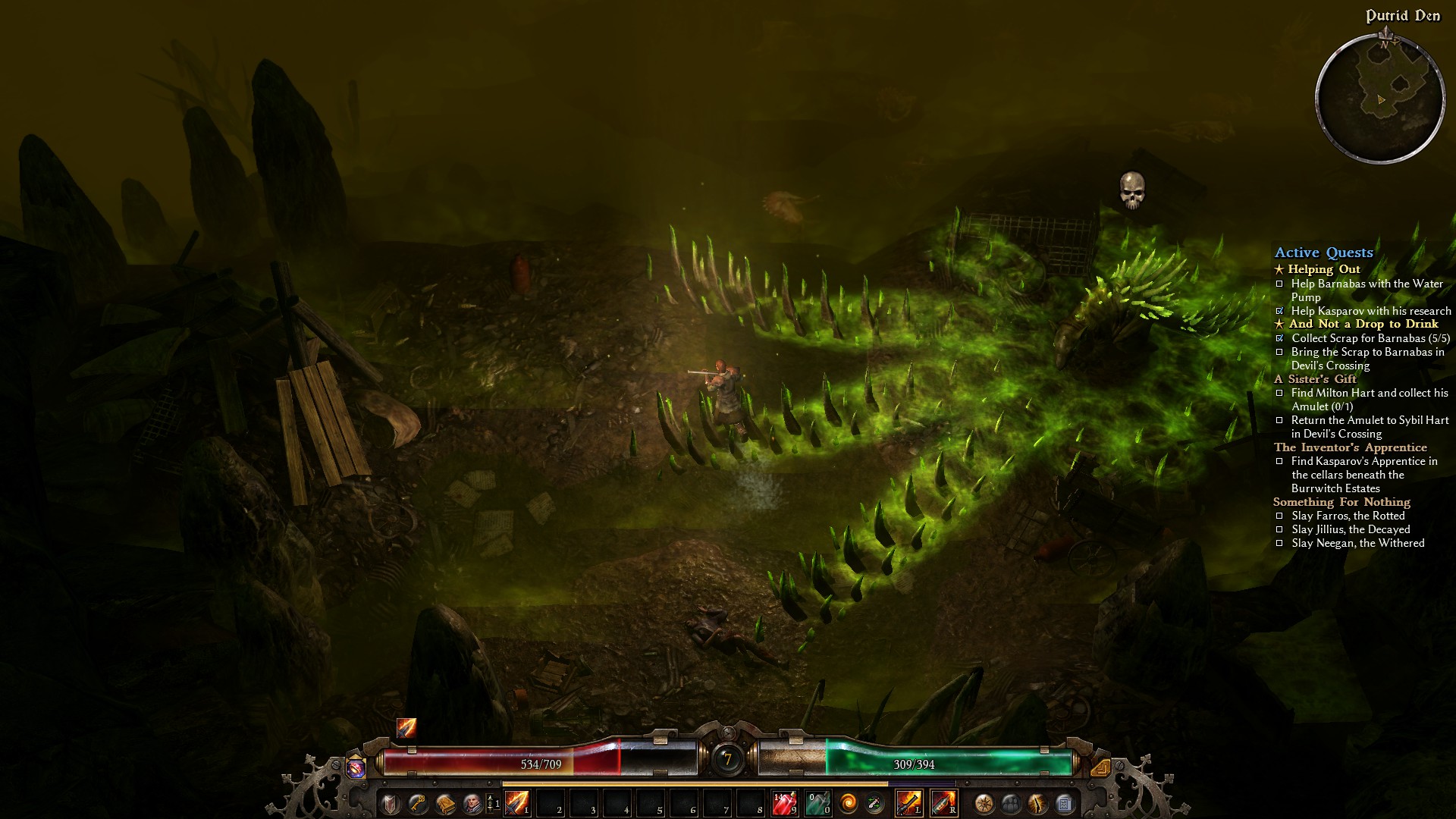 So, yes, consider me eating crow, but doing so with a smile on my face as I dig into Grim Dawn a bit more. I don’t really have a lot of choices I can ask of people to help me with in terms of polls, but I would ask the vets of this game for their help in terms of my build choices. Ultimately, I think I’ve made the right decision in focusing on the fire skills, but I would like to know where my points should be spent. Thus, this week’s poll. I contend it’s not an interesting one, but I would like to push forward and defer to the collective wisdom of the poll.

Where should my points be spent?

As usual, polling will wrap up at 1:00 p.m. EST this coming Friday, December 17th. I’ll be looking forward to what happens next, but in the meantime, I think I owe Grim Dawn a little apology. I may have jumped to conclusions a little too much…