I’m not sure that this edition of Choose My Adventure has any more legs left to it. Partially because Grim Dawn is, at least to this point, a generally linear experience, but also because I kind of just want to play this game by myself. Not to say I don’t value everyone’s engagement, of course, but I am ready to just get on with this one on my own steam.

That said, the advice given by the polls – to power up the chosen skills I have first – was definitely the right way to go. Once again, I started to feel myself slowly building in power at a noticeable and appreciable clip. It wasn’t lightning fast in terms of speed, but the gains in my skills from a visual and damage standpoint was incremental but obvious; my fire strike shots were blowing up faces and my fire bomb was getting bigger and prettier and… well, burnier. 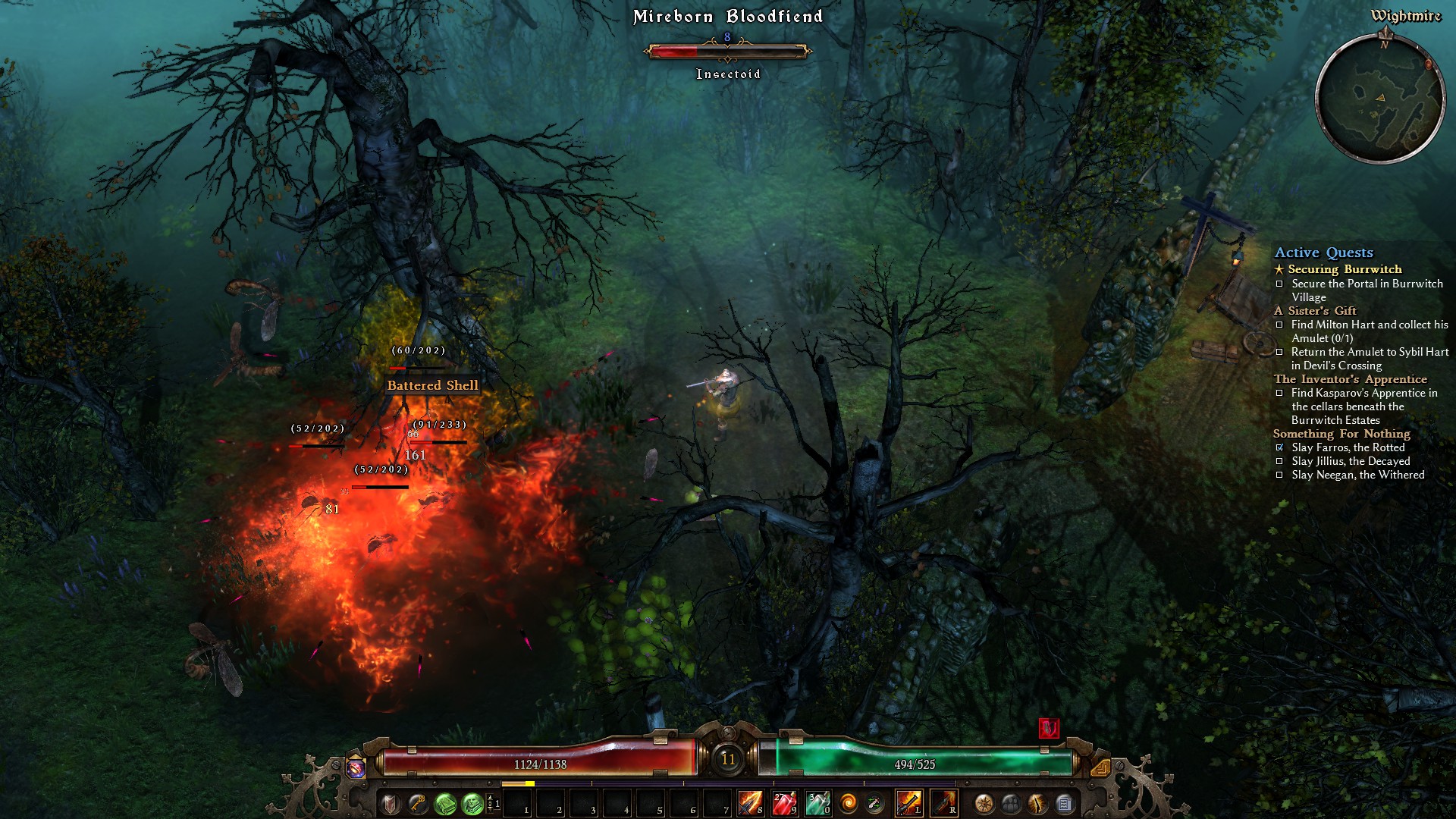 I also have to say that the progression from area to area felt fine-tuned and smooth. At a certain point when I was in the very starting area, I was blowing apart foes a bit too easily, but a simple walk further north presented me with a few new enemies and everything featuring a bit more health.

Not to say that I still wasn’t rocking some face, though. There were more than a few instances where my advantage in positioning felt almost unfair as I tossed a fire bomb at a chokepoint and forced enemies to walk through hell to try and get to me.

Another tip that I got from the comments was related to the Devotion system, which I was kind of brushing off as superfluous or insignificant until someone pointed out that you could actually search for key words to find out what stars in constellations I should chase after. For instance, since I’m pretty much following burning and fire damage, searching for both terms highlighted the portions of the Devotion UI I should go after. 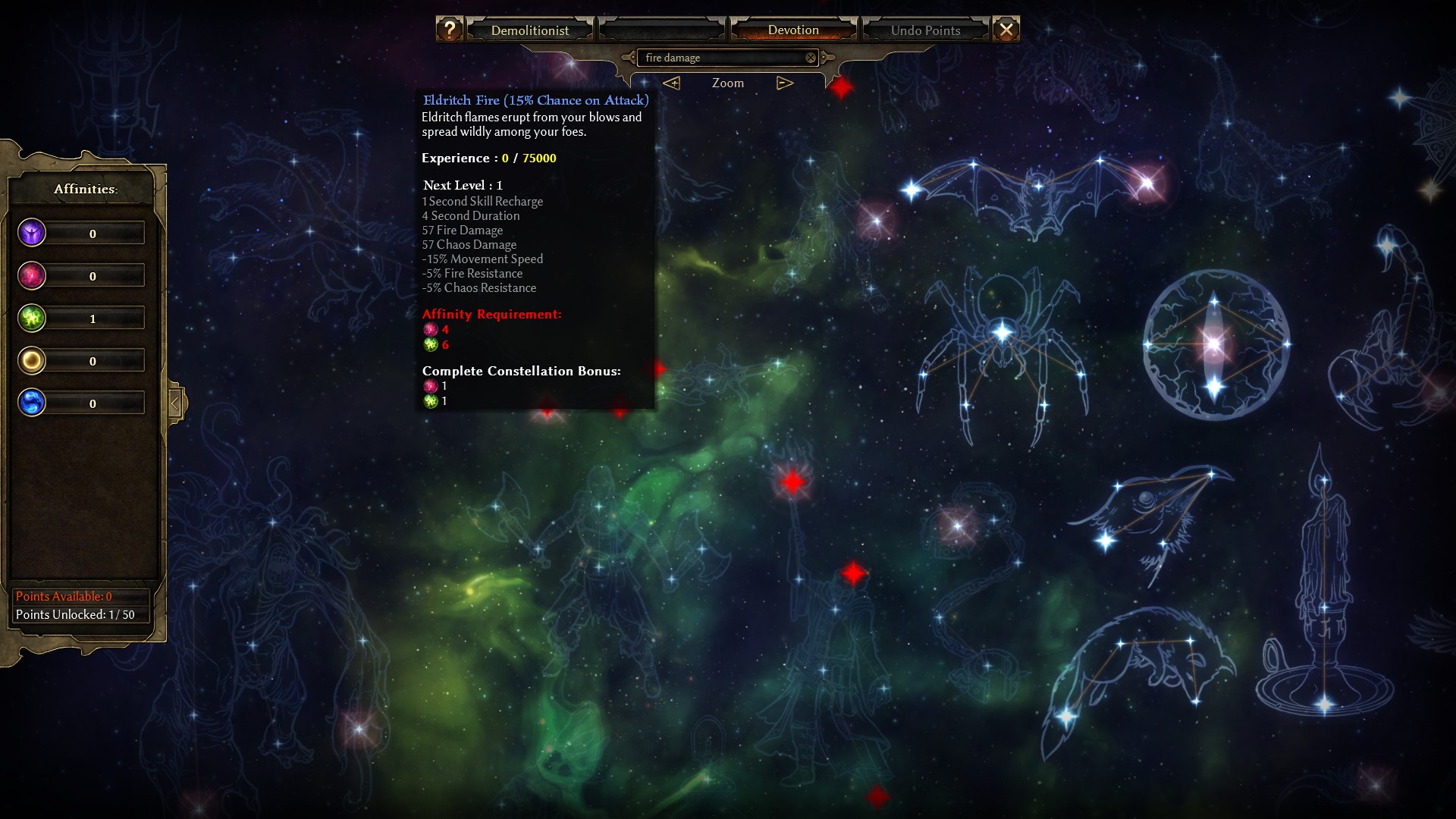 Luckily for me, I started heading in the right direction – Eldritch – so I feel more informed in my decisions. Furthermore, making bad decisions apparently isn’t a hard thing to correct. I’m not sure how creative character builds in Grim Dawn can be, but it definitely seems like correcting missteps isn’t the kiss of death it would otherwise feel in other ARPGs I’ve played.

These systems all pull together with spending points on stats, plucking the right loot, and using the right gems in equipment to make my little Demolitionist turn into a DPS terror. I found a gem that lets me toss a pool of acid on top of the big-ass fire bomb I already have, making me something of a DoT monster that can just pile on extra hurting from range with my chosen two-handed ranged weapon. Further down the tree I’m following, there’s a skill that makes my basic attack explode. And hurt more when I use two-handed ranged weapons.

This is a long way to say that I think I’ve found my build. 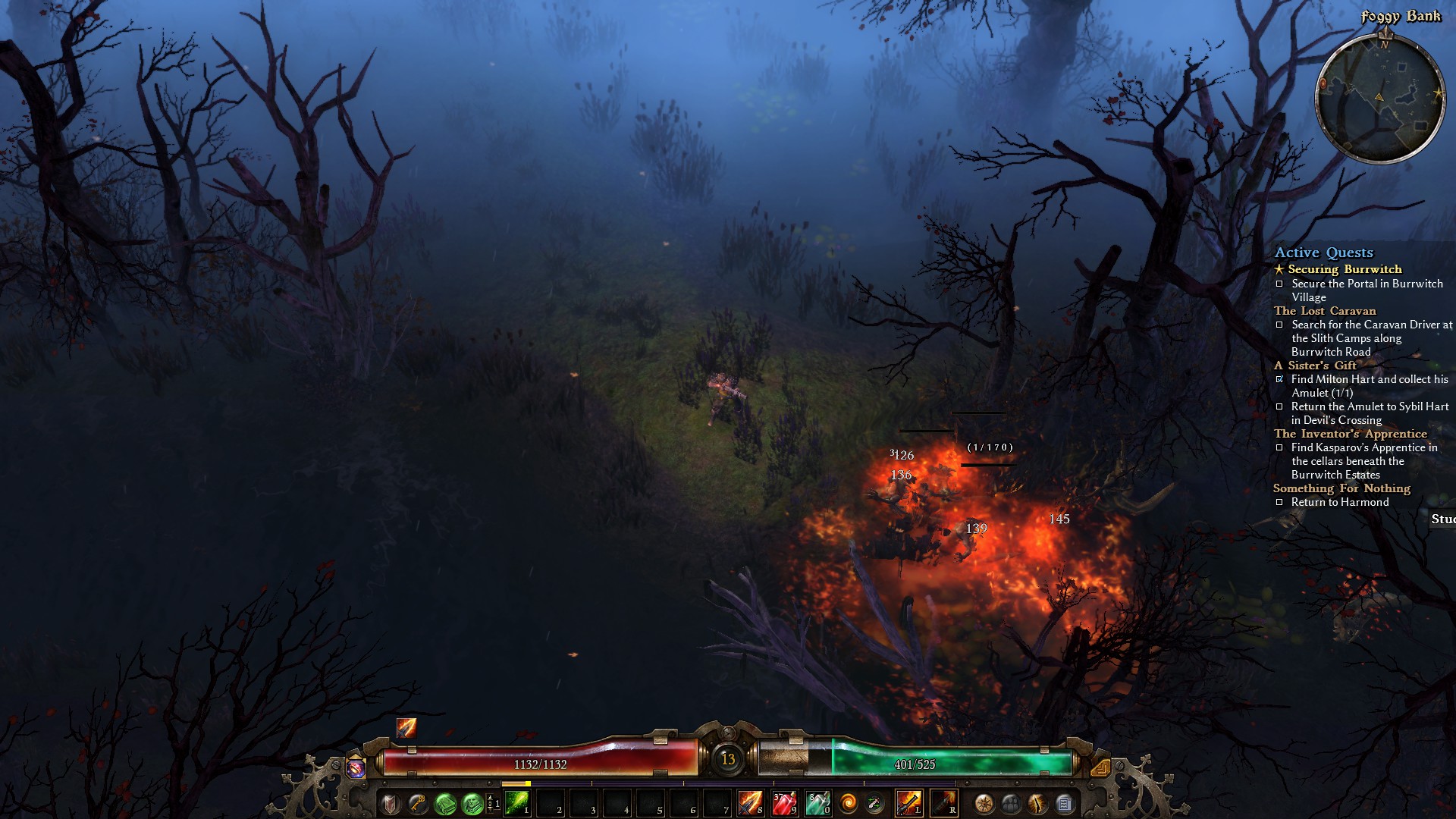 I’ve been enjoying the slow ramp-up in power and my chosen skills, in fact, that I’m taking my sweet time moving from area to area, clearing every single sidequest I can as I go. There is, as far as I can tell, a whole lot of game here, and I intend to chew on every single piece of it.

Even simple exploration as I seek out sidequest objectives is enough of a good time for me. There’s more than enough points of interest out there for me to explore, a few little caverns or dungeons to plumb, and at least one time I found another Devotion Shrine that I had to cleanse by blowing up enemy faces. What’s more, my obsessive search for everything possible and opening up every portion of the map is rewarded, not just in loot and XP, but in finding quest objectives before I even get a quest; there have been a couple of quests that I was able to turn in immediately simply because I happened across the right requisite items, making for instant clearing.

Overall, Grim Dawn has so many smart design decisions and so much good stuff going on for it that I feel a bit ashamed that I didn’t find it sooner. Chalk it up to my overall distaste for ARPGs in general, but this one made enough of a strong first impression that I’m ready to keep dipping in, slowly unlocking things, slowly sorting out my build, and moving my way along the game. It might not be the sort of universe I care for, but the game itself, at least in my few first hours, is something that proves to me that there are diamonds hiding in the rough of sub-genres I otherwise would not enjoy. I just wish I was playing with others. 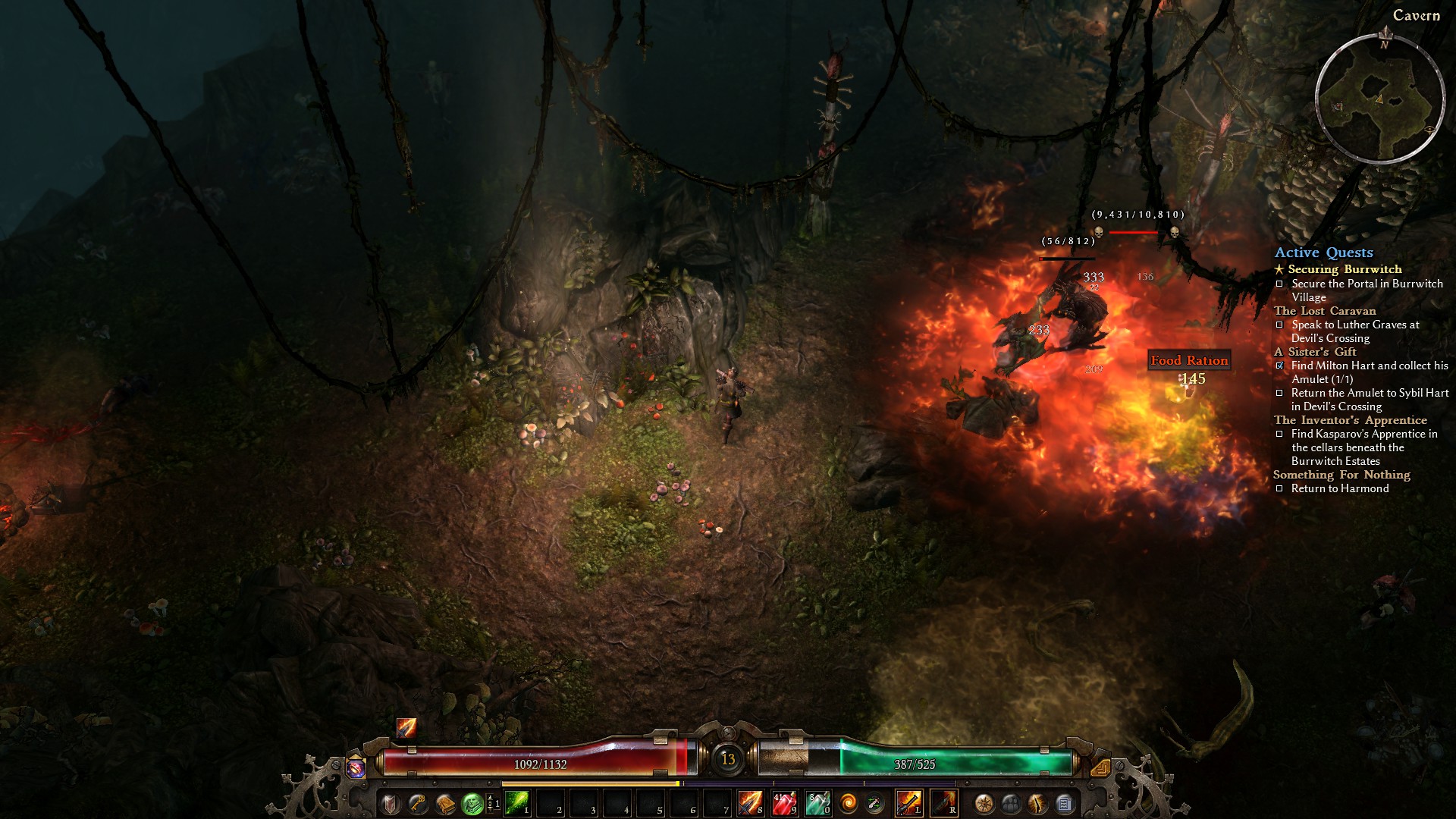 As I mentioned in the lede to this column, this will be a wrap for Grim Dawn on CMA, while next week I’ll be taking a moment to look back on the games I’ve played all through 2021 as is tradition here on MOP. That doesn’t mean there’s no poll for this week however, and in the spirit of retrospective, the month of January will be a quick return jaunt to MMOs and MMORPGs I haven’t visited in this column in a while.

It’s kind of like the Not So Massively Mix but with previously visited games instead. That also means a new game each week, with polling thinning out week by week as January rolls on. So that leads us to the first series of choices in our CMA return trip series So help me decide, friends!

Which game should I return to? Choose My Adventure!

As usual, polling closes at 1:00 p.m. EST on Friday, December 24th, and we’ll pick this all up after the year in review. Until then, I’ve got a new ARPG to play.