Once more, I’m reminded that Dungeons and Dragons Online should be part of my regular MMORPG gaming diet, primarily because this game lets me just drop in, have adventures, and drop out. Mostly.

END_OF_DOCUMENT_TOKEN_TO_BE_REPLACED
I had returned to the game during a stream a couple of weeks ago and was pretty much reminded live on camera of the things this game does right in terms of gameplay beats. I simply walked up to some NPCs that were nearby (and in a list of quest starters in an in-game UI element), talked to them, and headed to a nearby instance.

The one instance I did select during that stream, though, ended up being a whole lot more involved than I expected, though, involving stopping kobolds, then a bunch of kobolds, and finding an item of some importance deeper in the subterranean areas of the city I was currently located. The missions I had taken up prior to that point were all just sewer-based delves, and this one started similarly, but it slowly unfolded into mushroom-filled caverns, a whole underground city, and a little classic subterranean dungeon.

It also kind of introduced me to the fact that I was probably just a bit out of my depth. For the most part I was able to press forward on my lonesome purely because I was given a cleric hireling to follow me around and be my healbot, but at a certain point I ran afoul of a particularly nasty trap and my hireling’s time ran out. Honestly, I’m pretty sure I was doing something meant for a group solely by myself. Which, as a paladin, hasn’t really lead to my doom terribly often except for this specific instance.

It further reminded me of one of the bigger problems of DDO that I was running in to: This game is not exactly great to find others playing at lower levels. I entered every instance I was running, including this one, at normal difficulty and open to any old person to join me, and I had one person try to join… and then immediately cancel the request because it was apparently a “misclick.” 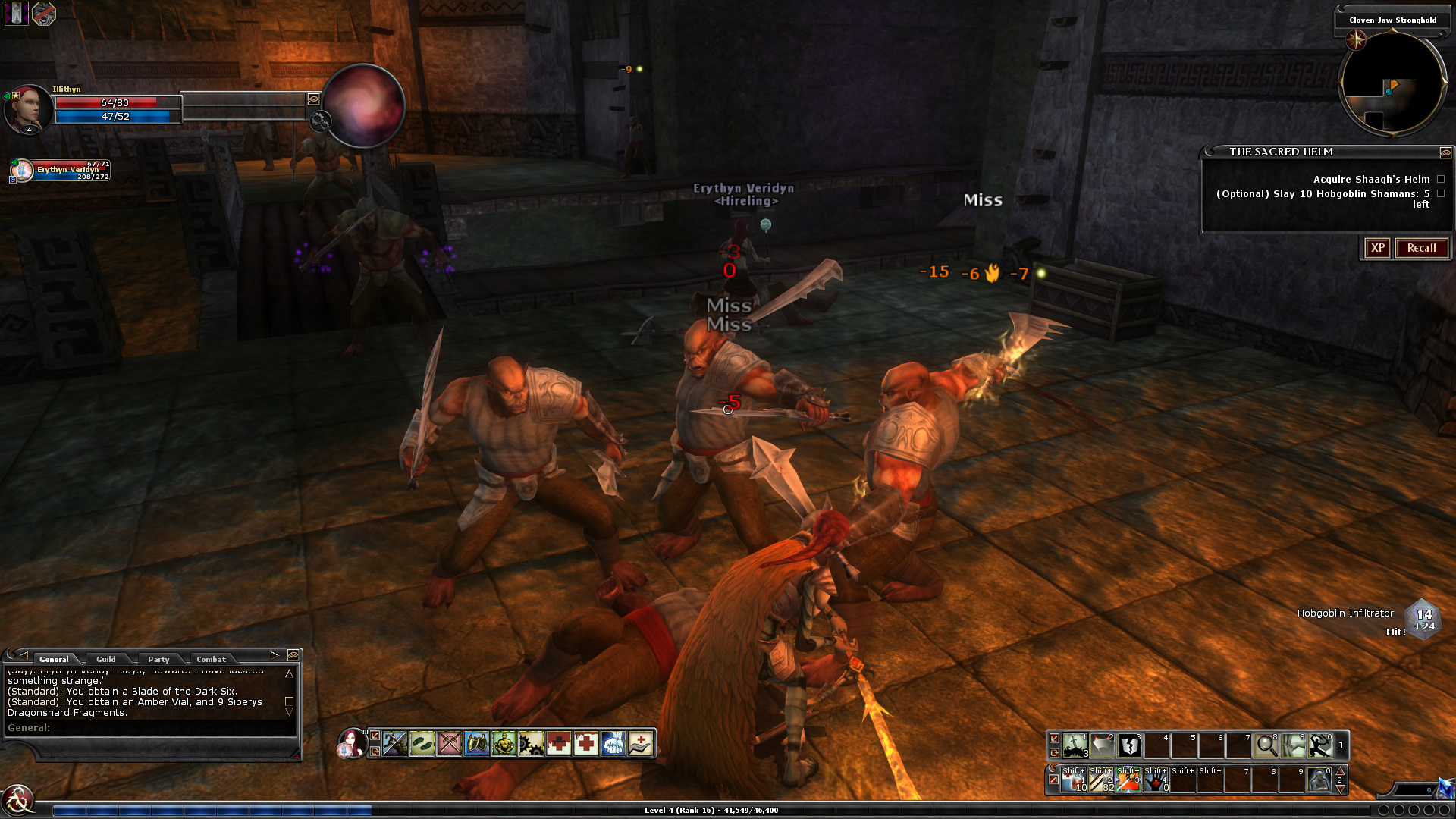 Basically, this meant that I was reliant on the healbot hireling, which I understand can be temporarily hired for in-game cash or bought from the cash shop. Not exactly ideal when I want to play with others – adventures are nice to share, after all – but not a total buzzkill, especially since I’ve been making money hand over fist to this point. I don’t know if that will be terribly sustainable as I move past the lower levels, however, so I have that little doubt in the back of my head from this point on.

Still, I think this was mostly an issue with the specific instance I had selected to chase, which I’m pretty certain is meant for groups exclusively. I was able to take up other adventures on Normal difficulty without much issue. I’m just missing the finesse of having a more balanced group makeup of humans to adventure with. Most of my problems are being solved by sword swinging.

On the subject of that sword swinging, the combat in DDO is just as jank and “Standing Stone-y” as I remember it being; a weird, stiff, but oddly comfortable and engaging sort of old-school MMORPG rigidity, like a wooden marionette trying its best to perform action combat MMO gameplay. I know that sounds like a demerit to the game, but it’s oddly not. I find this kind of combat perfectly enjoyable. Perhaps it’s because I still have a soft spot for LOTRO. 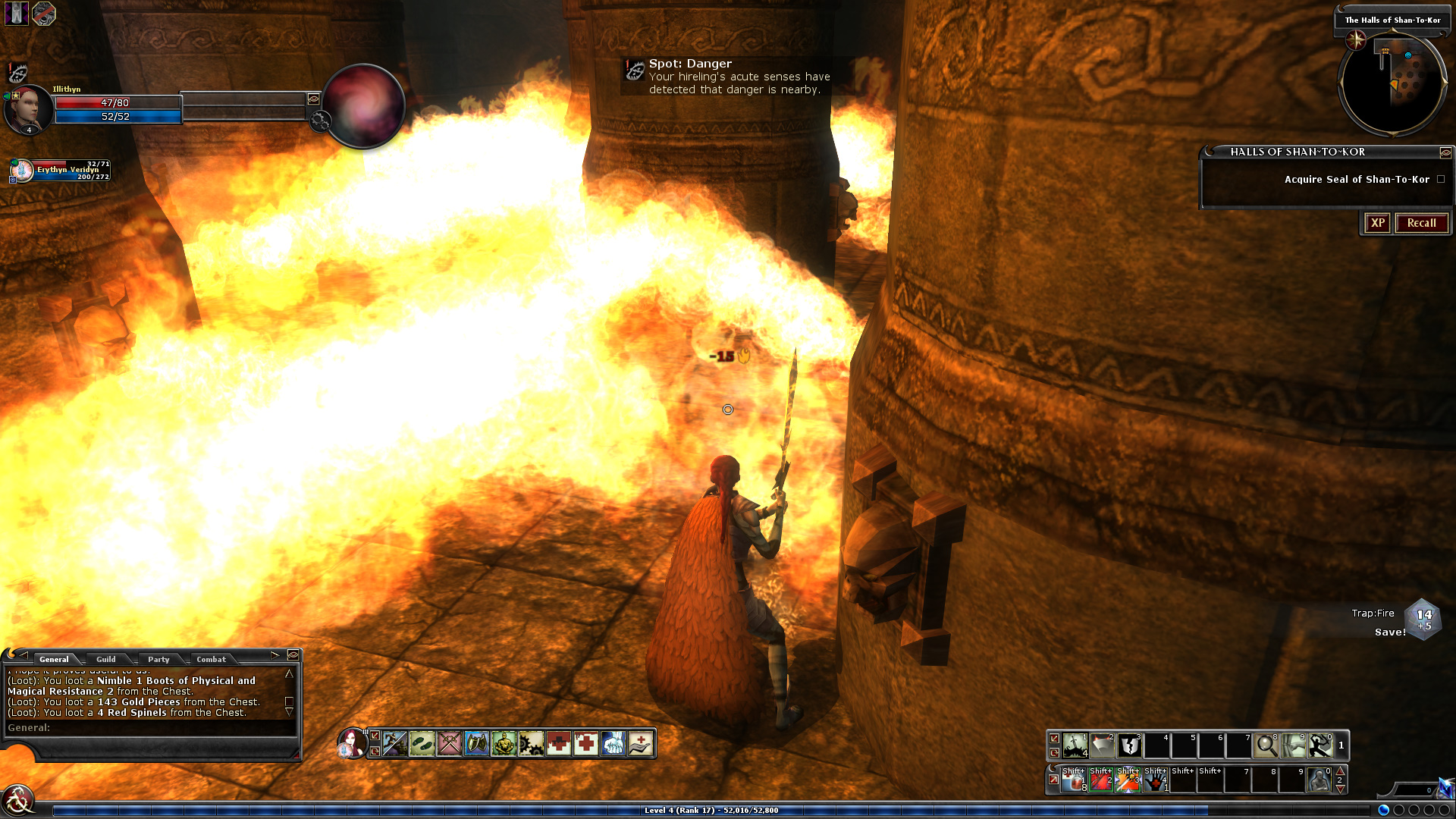 I guess what I’m hoping for is to share this experience with a lot more people, but it doesn’t seem like there are a lot of people playing around the level 4-5 mark. Which is a shame because, well, this thing feels like a D&D videogame and D&D is best shared with others. It’s a collaborative experience, and the encounters and adventures I’ve taken in DDO to this point kind of have things for a classical, archetypal D&D party to do. There’s enemies for me to tank, distant foes for ranged characters to help fight, and traps and hidden things for thieves and tricksters to find and disarm.

I want to share that with others, and hirelings don’t fit that bill. Especially when some of the hireling pathfinding is particularly stupid. One time my hireling couldn’t understand a ramp and got stuck, and every time I climb ladders they warp to my position and constantly plummet to the ground in a neverending pitfall hell of their own design. Yes, the hireling can port to my location, but that’s not the point. I want to play with other people and I hate pet classes.

Honestly, this is just me yelling at the moon to stop shining, though. No amount of complaints I have about being forced to play by myself with a healbot will change that fate, and I still do really enjoy playing DDO in spite of that complaint. Would I appreciate having humans with me? Definitely. Am I going to never play this MMORPG because I can’t find others? Not really. I might not play it as frequently, but I want to play this game more. It’s still a good time. It’s still the best D&D MMO going, in my opinion. And this return trip for this column reminded me of those nice things. 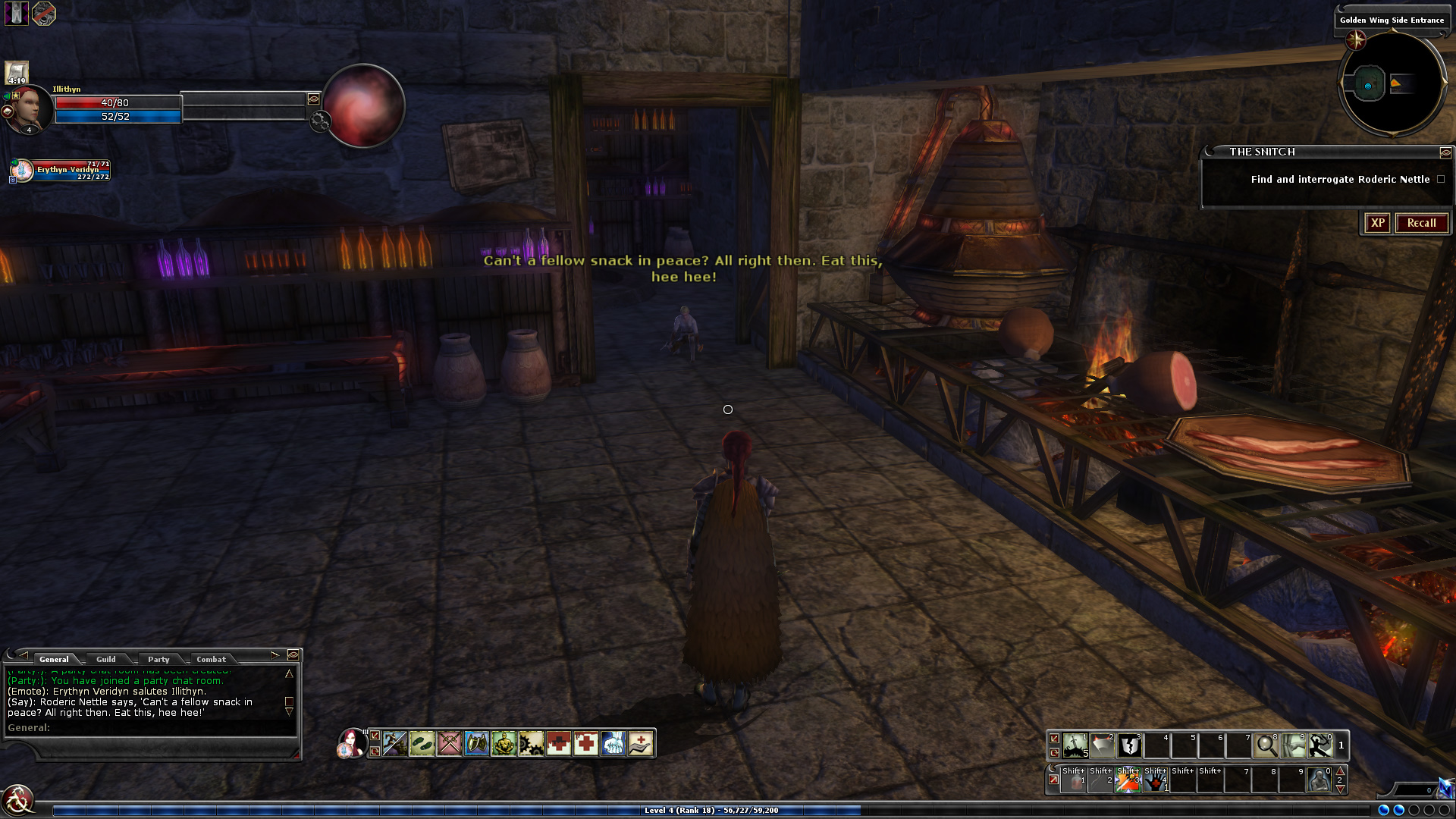 With that said, it’s time to press on in this month’s series of adventures. We’ve still got one week left in this month, which means we’ve got one more game to return to. So, that means our first poll is how we determine where to go to next.

What MMO should we return to next?

The second poll I’ve got lined up is concerning next month’s adventure. I recently picked up a VR headset (an Oculus Quest 2 specifically) and have been absolutely in love with the thing. This, of course, means I get to dig into MMO and multiplayer VR games for MOP, but I’d like to start that potential coverage with a VR CMA for next month. Granted, there aren’t a whole lot of “true” MMORPG choices out there for VR – two, to be exact – but I still want to dive into one of these worlds next month. So that’s poll question two:

What VR MMO should we head to next month? Choose My VR Adventure! 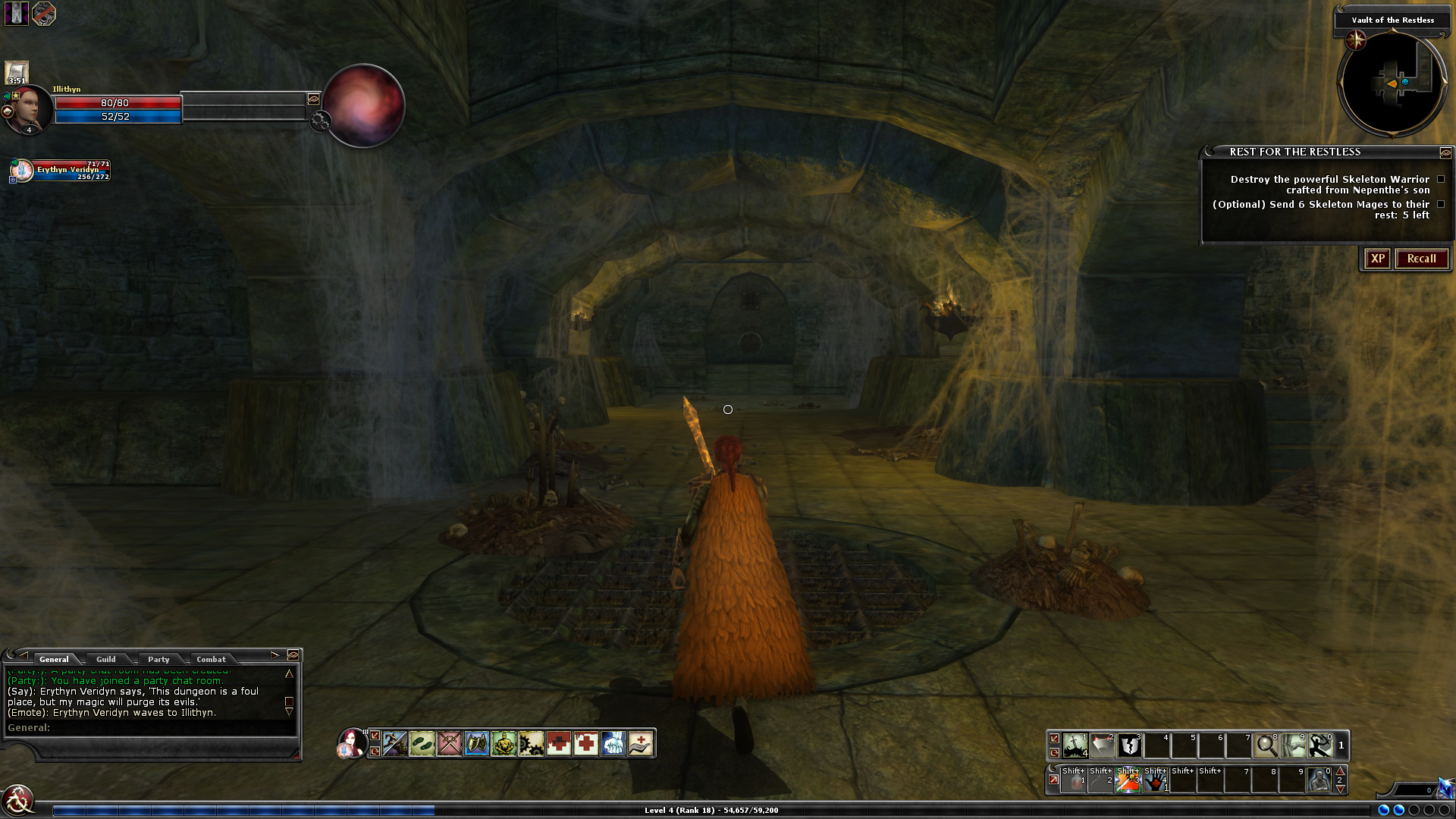 Like usual, polling will close at 1:00 p.m. EST this coming Friday, January 28th. In the meantime, here’s to my paladin and her hireling sloshing through various random adventures.