Some things are staying the same in Pokemon GO this February: weekly 1 coin Remote Raid Passes, the return of old Mega and Tier 5 raid pokemon, a useless-seeming Community Day target (Hoppip), and a less-than-exciting Research Breakthrough Pokemon (Espurr). However, there are a few things besides the Johto Tour to be excited about, and we’re going to dip into them in this edition of Massively on the Go.

For one, the whole month of February will get increased XL Candy and double XP from hatching eggs. This is big for veteran players, as XL Candy is already being awarded for all trades, making this end-game resource even more common and allowing a wider selection of pokemon to be powered up to the level cap without the use of external devices abusing the game’s walking-bonus system. Speaking of walking, are you ready to go outside yet? Because Niantic seems to think you should be. (Pay no attention to the cold and snow blanketing large swathes of the US right now.)

Insofar as the previously mentioned February 12th Community Day, players in parks during the event will have an increased chance to find Skiploom, the second stage of Hoppip, which grants at least 1 XL Candy and 5 regular candy when caught. However, this Skiploom will also grant additional bonus XL Candy when caught (again, in parks).

Granted, as Go Stadium’s analysis mentions, Jumpluff (its final evolution) would be most at home in Great League, as its CP falls too short to be of much value in higher leagues. Even at max stat-efficiency, Jumpluff need only be level 43, meaning the XL Candy earned would be negligible. That makes it seem that the Tropius-lite dandelion’s Community Day is more of an experiment than anything. Compounding that is the fact that its Community Day is also granting 3 free Raid Passes.

But that’s not all: From Wednesday, February 16th, to March 1st, players can get two free raid passes per day from spinning gyms. This seems part of Niantic’s Meet You Out There push that’s gotten them into trouble. I can’t speak about every town in America, much less the world, but as of this writing, my current area has over 25,000 new COVID cases per day. In November, this area had about 1,000. It may be less deadly, but it still overwhelms hospitals that also serve non-COVID patients. As I’ve said before, a game company shouldn’t be trying to drive change and set health safety standards in the public sector, and it’s disturbing that Niantic continues to do so anyway.

Raids this month are largely for PvP fans too. Earthquake Regirock (February 1st-9th), Zap Cannon Registeel (February 9th-16th), Normal Deoxys (February 16th-19th), Attack Deoxys (February 19th-22nd), Defense Deoxys (February 22nd-25th), and Speed Deoxys (February 25th-March 1st) have limited use in PvE. The variety of Pokemon being offered in Tier 5 is nice and may be a factor in why we’re getting extra passes, but I’d recommend players trying to save passes for Februart 26th’s Johto Event, as they’re far more useful than Deoxys for raiders.

You’ll also notice the Mega Pokemon aren’t new this month and already had events that gave us their energy for free. It would have been nice if, say, Mega Audino were released to fit in with the love/pink-theme of the month, but oh well.

Spotlight hours are also looking a bit boring, though Voltorb’s event may be interesting, as Pokemon Legends: Arceus is about to release at the end of January and there’s a Pokeball-themed Johto leadup event scheduled for February 18th-25th. We’ll update this section as Niantic releases further details. 1/30 Update: Without warning, Niantic started spawning Hisuian Voltorbs from 10am-4pm local time. Catch them while you can, as current reports note they’ve disappeared, though Serebii.net is reporting they should still be spawning in the wild afterward. Do note, however, that Hisuian Voltorb does not transfer to Pokemon HOME, so don’t feel like you missed out too much if you’re more into the main series and were looking for an edge. 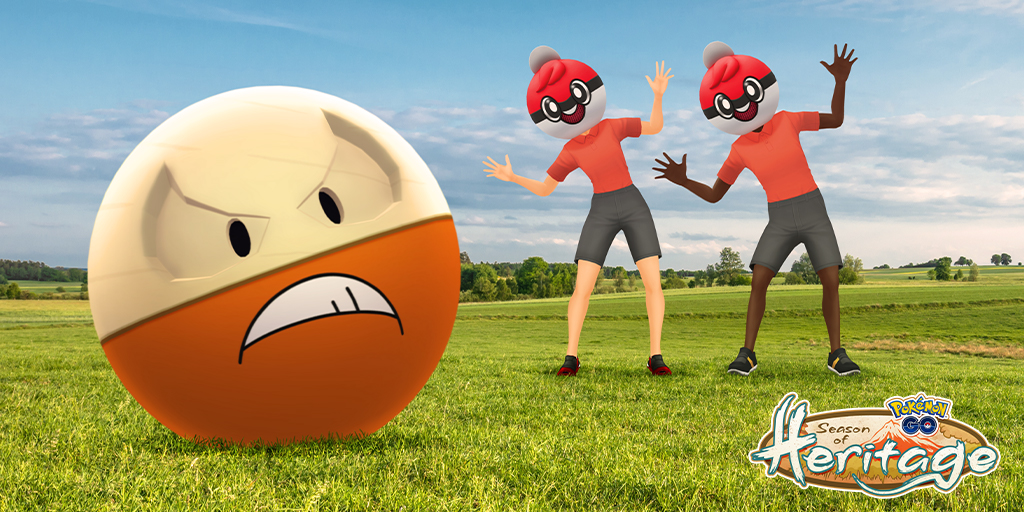 2/15 Update: Niantic has now laid out the Pokeball event details. From 10am on February 18 to 8pm on February 25, there’ll be more pokeball research tasks to help you stock up on supplies for the Johto Event on February 26. Your buddy pokemon will also bring you more balls, you’ll be able to evolve Hisuian Voltorb into Hisuian Electrode, Marill and Galarian Stunfisk will be spawning in the wild more (for you pvp fans), and as you can see from the above image, we’ll have access to a Ball Guy costume as well.

On a lighter note, for those who were playing POGO this time last year, it may come as little surprise that Niantic is offering trainers the opportunity to entry their trainers and suggested teams into a contest to become in-game Gym Trainer NPCs. The rules are more stringent though, as there are specific themes and they are type-based: Normal, Fighting, Flying, Bug, Ghost, Ice, Dragon, and Steel.

Lots of current entries show people aren’t reading the rules, but it’s also a reminder that the limitations are very real. For example, Dragon and Ghost-type pokemon have fewer than five options each (even fewer if looking only at final evolutions), meaning a lot of entries will look the same. As with the last contest for the Kanto event, we assume regional variants (like Alola Exeggutor) are not allowed, but we’ve asked PR to clarify this once again and will report back if we hear anything, though such a change wouldn’t add that much variety anyway. Due date is 11:59pm PST on February 1st.

As for the rest of the month, we know that there will be a Lunar New Year Event from February 1st-7th, but no details have been revealed. While it’s the year of the tiger on the Chinese Lunar Calendar, Niantic chose Litleo (obviously Lion inspired) over the tiger-striped Arcanine for the spotlight hour starting the event, which is disappointing. However, again looking to Arceus, perhaps Niantic will release Hisuian Growlithe as part of the event. We’ll update this section as we learn more from Niantic.

1/31 Update: Niantic’s revealed the event details and they’re not too exciting. Much like with the spotlight hour, a Lion is being featured during the year of the Tiger, with Litleo’s “they look the same” shiny being released. New players largely benefit from easier access to Magikarp and Gyarados, and Growlithe will be appearing more often, but the main features are 2 special trades per day, increased chance for Lucky Trades, and increased chance to become Lucky Friends. The event ends February 7, and sadly doesn’t feature distance trading, so talk to your friends and figure out your trade situation (perhaps through cars).

February 10th-14th will be the game’s Valentine’s event, and we’ve been told that an “evolutionary line of Fairy-type Pokémon will even make its Pokémon GO debut,” which will probably be the Flabebe line, based on the hint in the loading screen. Once again, we’ll update this post should we learn more.

2/7 Update: Niantic’s dropped details on the Valentine’s Day event. Those looking to maximize candy on the newly released Flabébé should use Mega Altaria, as despite appearances, Flabébé and it’s line are purely Fairy-types, not Grass. The event starts February 10 at 10am and ends the 14th at 8pm, so it’s pretty short. However, if you don’t care about the new pokemon, Mega Evolving Pidgeot or Lopunny are good choices too, as the rare Chansey, Audino, and Furfrou will be spawning more often, with the first two being quite useful and the latter a good collector’s pokemon for travelers. To note, candies generated from Megas is limited to one despite the fact that the event grants 2x candy (so have some pinap berries ready!). There’s also, oddly, 3x transfer candy, so I guess it’s a good time to breakup with those pokemon who haven’t made the cut, if players collectively send enough gifts.

Both of Ralts’ final evolutions will be learning its Communtiy Day move, Synchronize, during the event as well, though it really is only useful for Gardevoire in general (though who knows how we’ll feel about it when Mega Gallade becomes available). PvP and collection fans may also be happy to hear that both Frillish genders will be a collection task reward and field research rewards.

Interestingly, there’s been no mention of a second Community Day similar to the recent Bulbasaur one. Should one be announced, we’ll also mention it, so as usual, watch this space.