Project Gorgon is being mean to me.

OK, maybe that’s unfair. I think I just shouldn’t have come back to this game after so long away from it, meaning my disconnect from where I am, what I was doing, and what I can do between now and the last time I played this MMORPG is something of an impassable gulf. It just sounded nicer to blame the game and say it’s being mean to me. And it’s shorter to write. 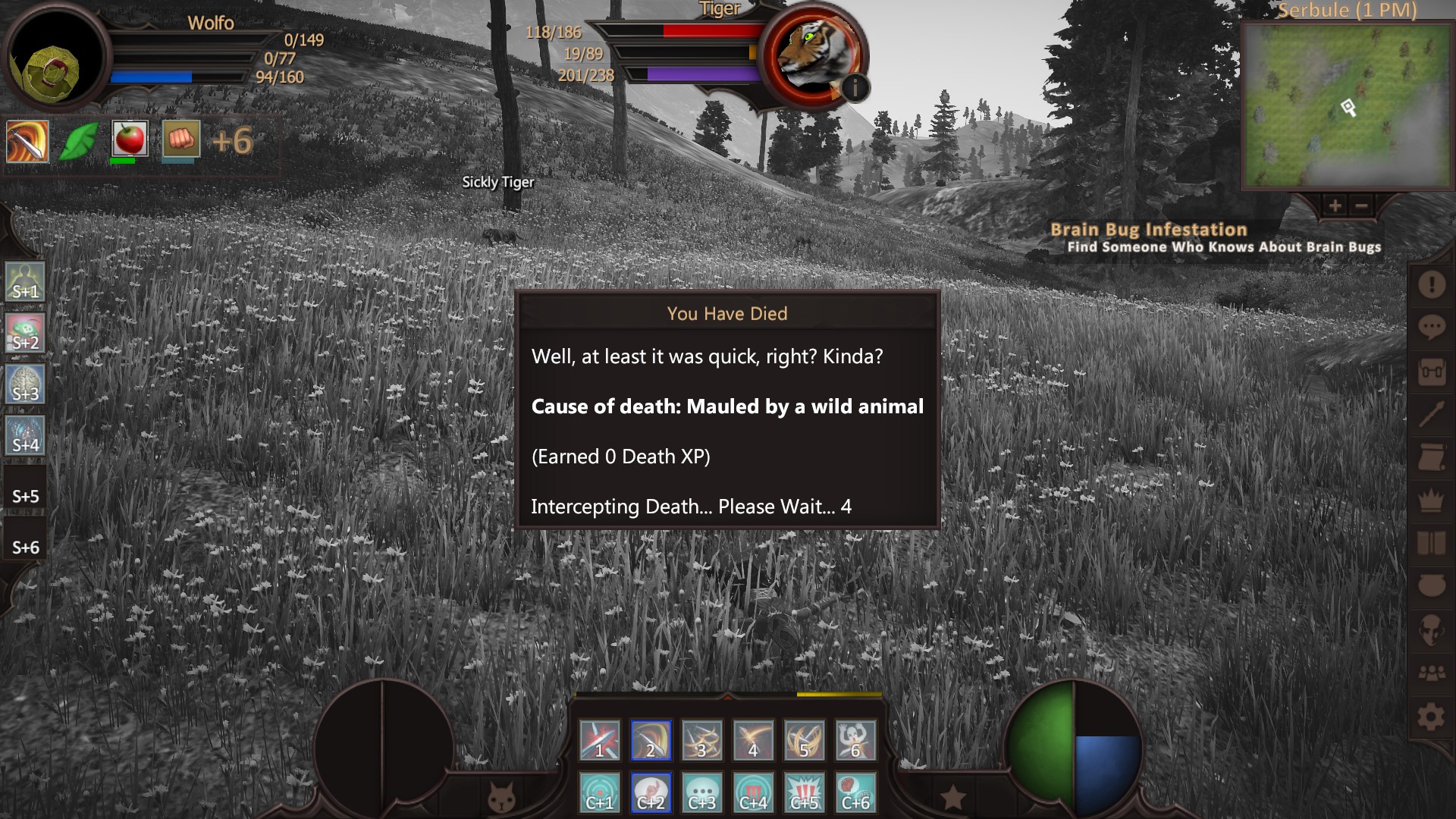 Let me elaborate. I remember being in the town of Serbule when I put this game back on the shelf after I visited it for CMA. I also recall that I was using a sword and shield paired with Psychology skills. Beyond that, though, I can’t even begin to tell you what I was doing or where I was going with the character build. So the moment of standing there, slack-jawed and trying to put together what the hell it is I’m doing here took longer than usual.

Eventually I stopped trying to jumpstart my memory and elected to look through the quest list that I had and see if there was a general cardinal direction to head towards. Sure enough, there was a quest in the list regarding brain worms that told me to go north. So that’s what I tried to do.

As I went in a northerly direction (more or less; anyone who’s seen me play open world games knows I can veer off-course rather easily), I was slowly beginning to find that this game was harder than I remember it being. The length of time away certainly didn’t help, but I also made sure to read the skill tooltips to remind myself of what all my buttons did. Or at least get a general idea. 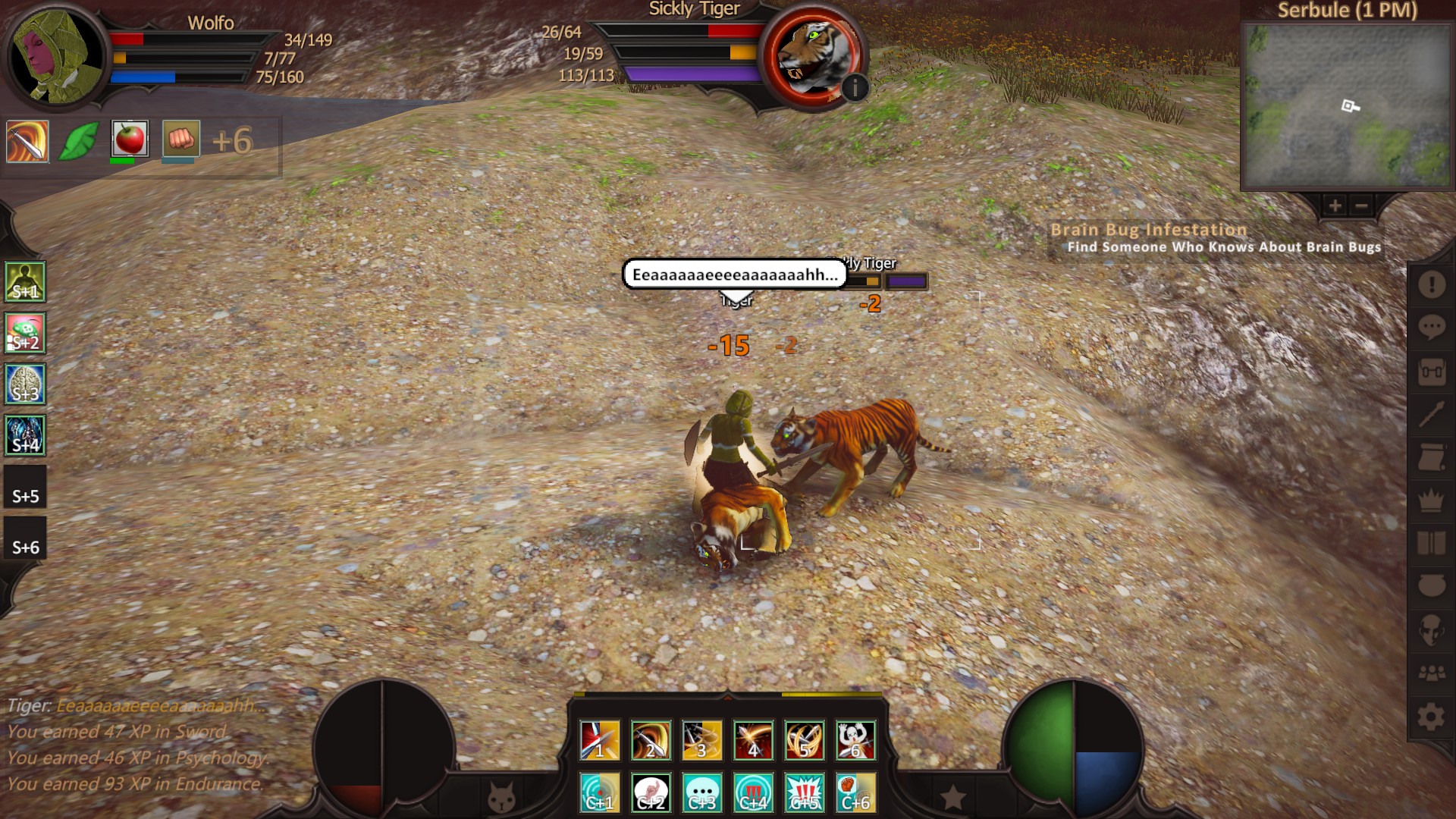 Thing is, I was doing a bad job of realizing what skills were good when, so when to hit attacks that are good against armor or HP or skills that would reduce rage attacks wasn’t really clear. I was slowly puzzling together a proper rotation, but it was still a far more befuddling thing than I expected and the tooltips weren’t fully understood.

It didn’t help that the enemies out there were whupping my ass. Sometimes I would be able to find easy fights, sometimes I would find an enemy that would prove to be a stern solo challenge but survivable enough, and then there were times that I ran into things like a named tiger enemy or a psychic mantis that were absolutely impossible to fight through. It wasn’t immediately obvious at first blush whether these foes would be hard (I kind of figured the named tiger would be too tough but I flung myself at it anyway), though paying attention to enemy hit points seemed to give me the best visual clue.

Even with enemies that were on par for my equipment and skill levels, however, I was running in to problems with aggro. I don’t remember foes having such huge aggro ranges, but enemies that seemed like they weren’t very close to me suddenly made a beeline for my face to maul me. 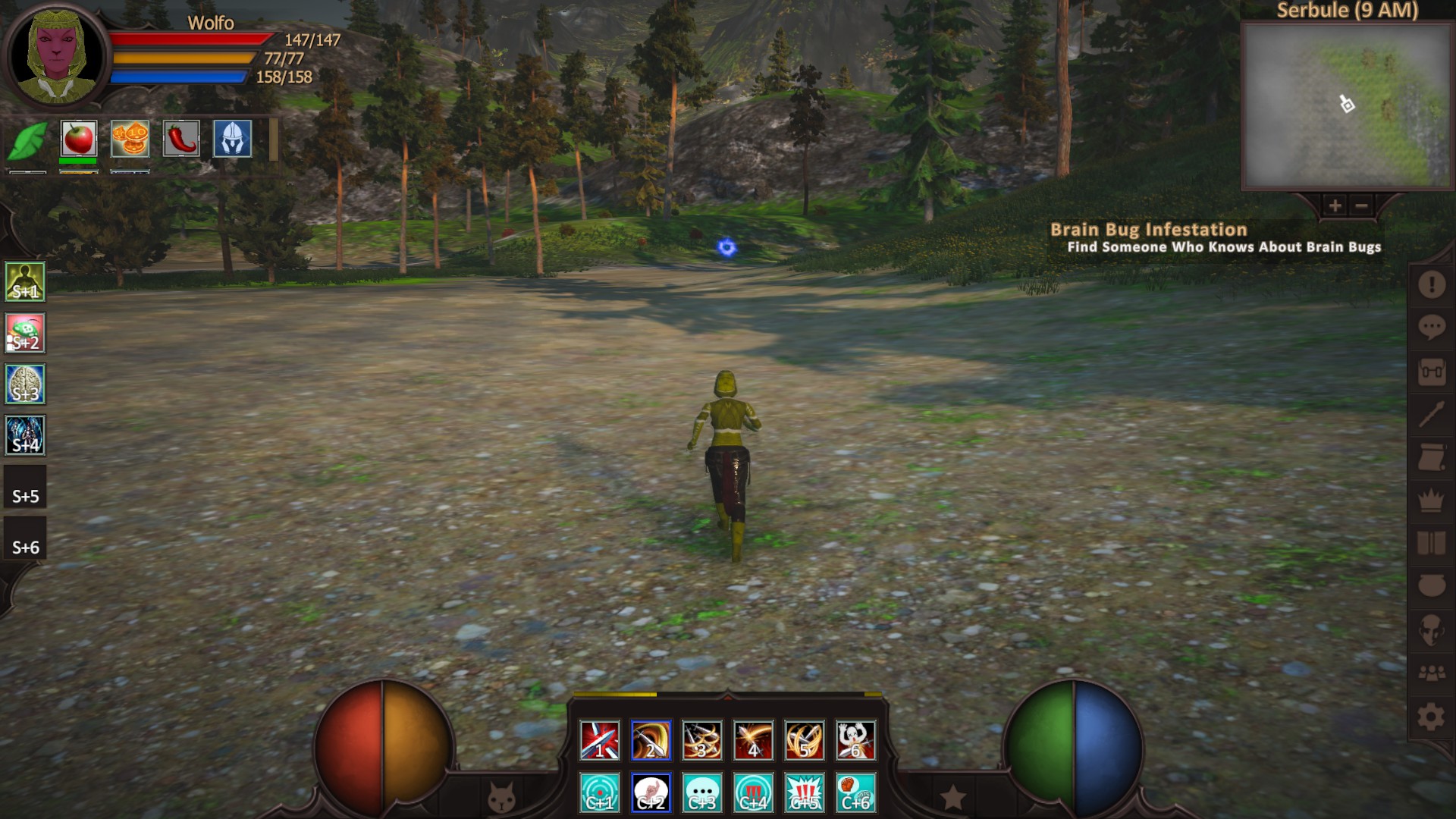 This wouldn’t be too much of a problem if I had a better sense of direction, admittedly, but basically my time back in Gorgon was a litany of questions where I was asking myself questions about my memory. Was this game always this hard? Was combat always this confusing? Were enemies always this hard to gauge? Was it always this challenging to find what I’m supposed to do? Was the last time I was in this game some sort of weird fever dream or some kind of summer romance that has since had its rose tint peeled away? Or am I just an idiot?

…OK, yes, I am an idiot, but that’s beside the point. The point is that I remember the learning curve of this game being a whole lot less steep, and I suspect that the time away from the game and coming back has made that curve turn into a wall. Which is really a shame because there are a lot of things about Gorgon to enjoy. It still had a sense of humor to it that I recall (primarily with the goofy death messages I was seeing). It still kind of made me want to wander around – at one point I found a portal to an area that was even harder than the Serbule Hills area I was in. It also did remind me of some of my early days in this genre.

Still, I wasn’t really able to surmount my lack of direction, and after about a dozen or so deaths I elected to call it quits on returning to Gorgon. I didn’t really feel like starting from scratch, and I didn’t care enough to muddle through and work my way past the frustration despite my desire to explore. Maybe I’ll revisit this idea later and see if I can’t work my way around these pratfalls, and it’s entirely possible I’m making mountains out of molehills. Also, it would probably just be smarter to use online guides for quests like the one I was taking on, but that sort of defeated some of the purpose of exploration for me and so I stubbornly steered away from them. 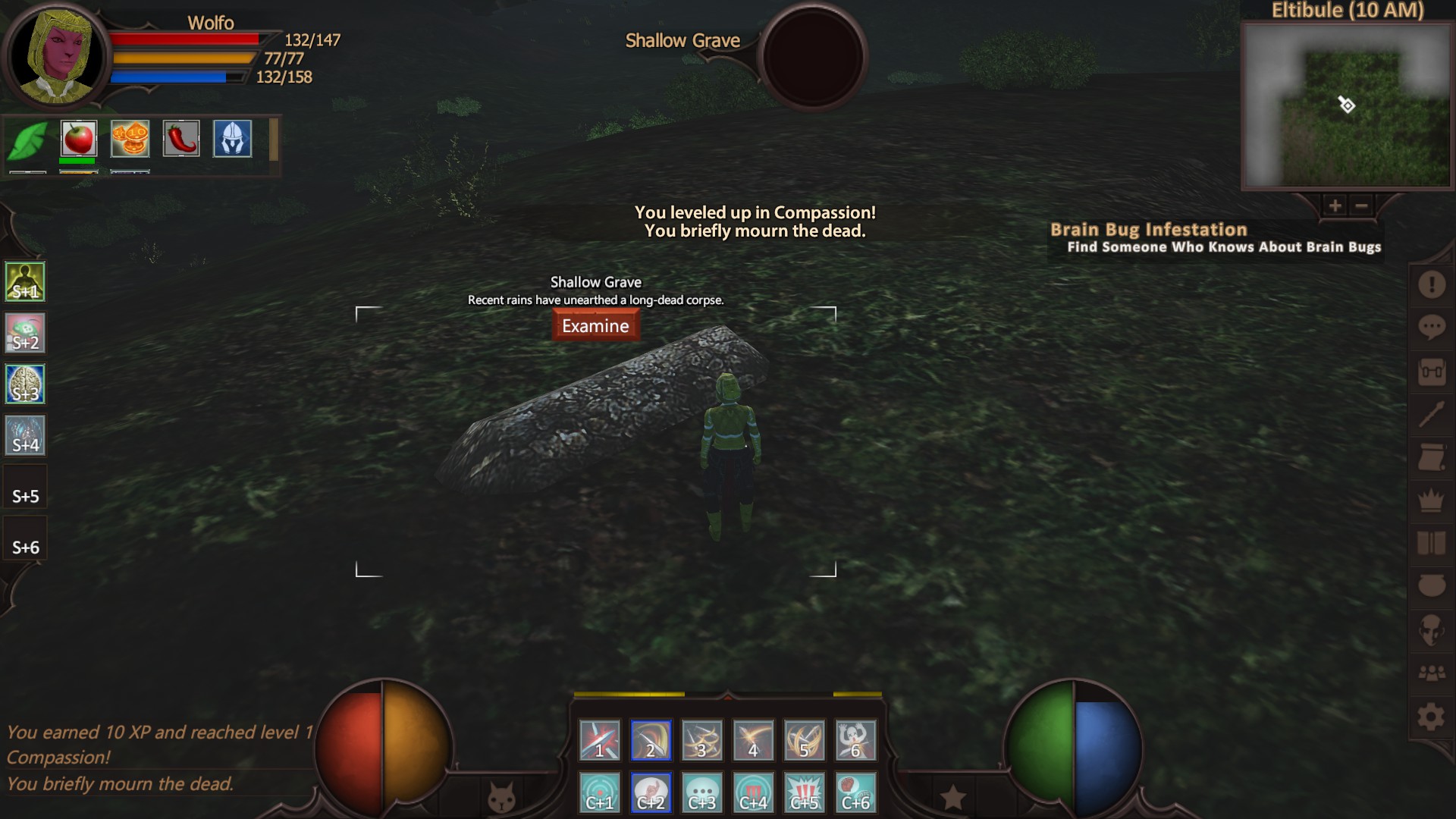 Maybe it’ll return to a poll option later, perhaps as part of the continuation of ESO that was voted for, who knows. In the meantime, though, I think I’m going to move forward. I apologize for not getting further this week, just know that as frustrating as this recount may be to read, it was doubly frustrating for me to experience. Still, there is next month to look forward to, and that involves a trip into the VR MMO Zenith.

I have to admit I am very excited to try this one out; the Quest 2 that I’ve got has opened me up to whole new types of gaming that are unlike anything else I’ve experienced before and I am extremely curious to learn how that experience translates in an MMO. First, however, we’ve got a couple of polls to determine our character. Poll one is about base class choice:

What base class should I start off with in Zenith?

…while poll two is about the spec for that chosen class:

What spec should I use for my class? 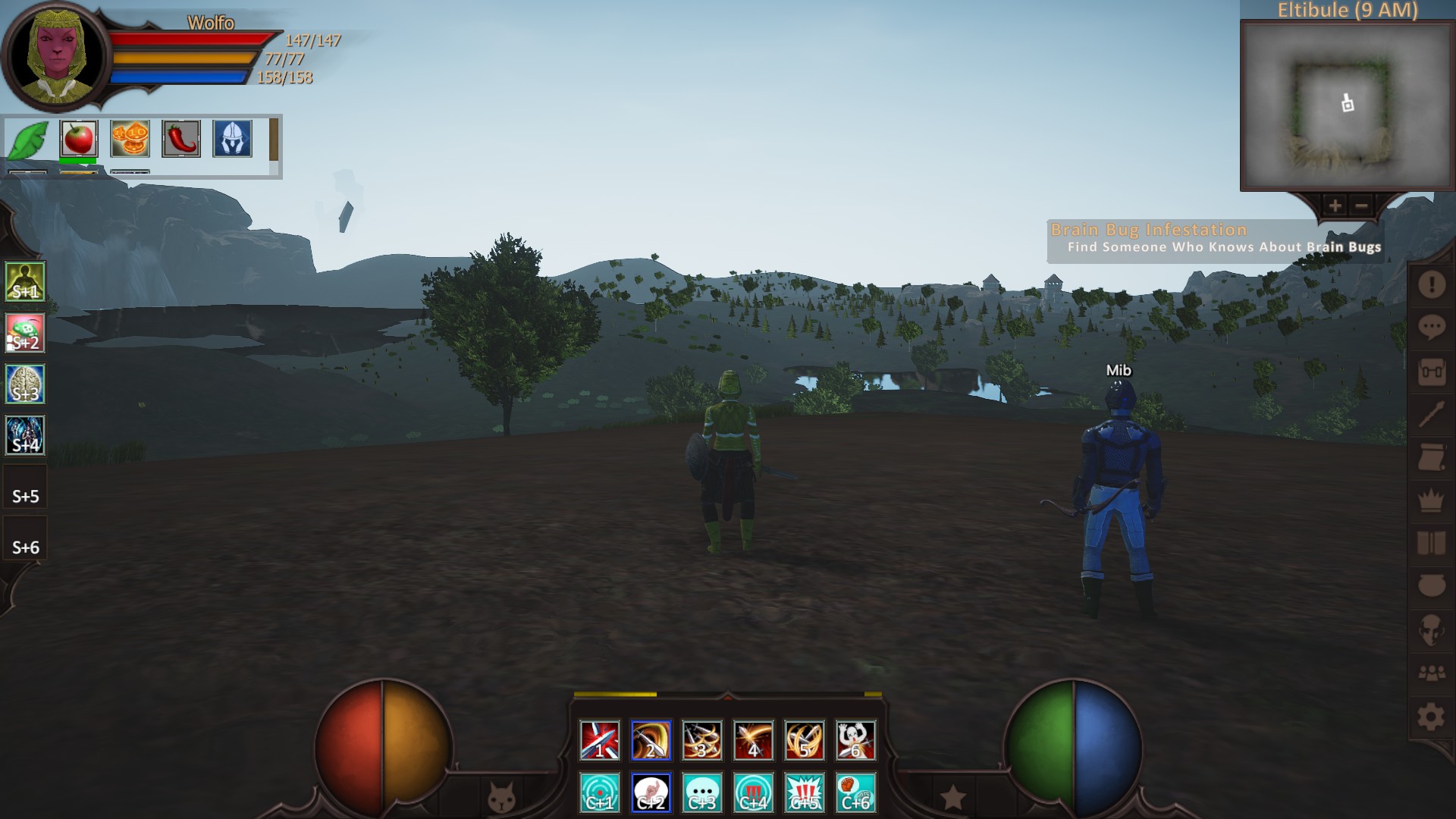 As usual, polling ends at 1:00 p.m. EST on Friday, February 4th. For the time being, I’m going to do something else.