Zenith is a bit interesting in terms of being a game for exploration. On the one hand, there are methods and means where I could push around and explore the area that I’m in, but on the other hand it is still very much a themepark MMORPG, meaning there are some hard limits on pushing that envelope.

I will admit that the word “explore” is doing a lot of work there; most of the time I’ve spent in the game as per the poll’s directive was kind of ramble around the starting area that I’ve been in thus far, walking around in circles and being generally distracted by shiny objects and the tactile sensation of locomoting in a three dimensional world. 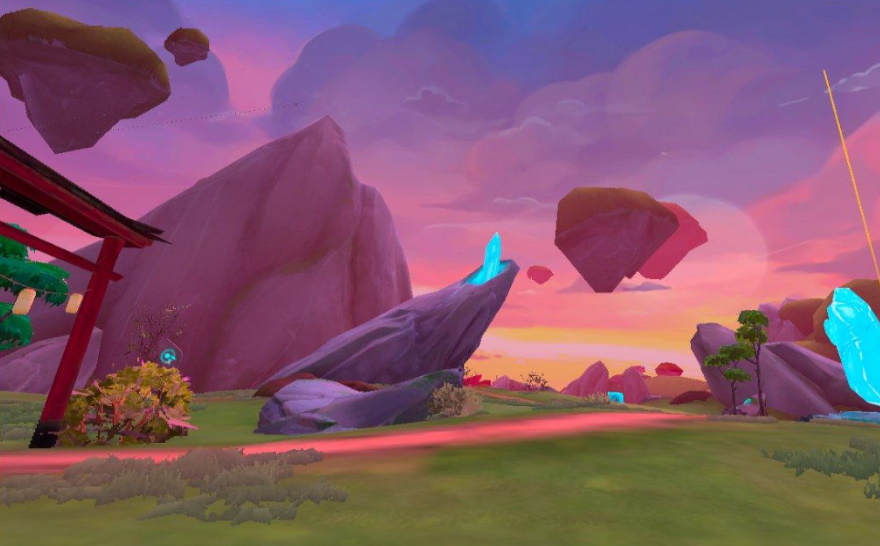 Obviously, in relation to VR, three dimensions means that there’s a sense of depth and space as I wrote about last time, meaning that exploration was a little more involved. Nearly every surface I could see, I could grab and thus climb up provided I had enough stamina. When I got to the right heights, I could leap off and glide around for a bit, again so long as I had enough stamina.

There were times when exploration felt a little out of place or like a mistake. At one point I was able to casually walk up a mountainside like it was a ramp, Skyrim style, which was weird because it looked like a place I shouldn’t be able to walk on. That said, getting to those heights meant I had some nice views to look at.

There were a couple of reasons to explore as well, though none of them was exactly groundbreaking. One of the quests I had in my ledger incidentally had me tracking down these statues that were stuffed in certain places that I had to climb to. There are treasure chests scattered about in out of the way places. There are these crystal things just sort of stuffed in random locations that I’m unsure what to do with for now. There are also, of course, the world events that crop up from time to time. 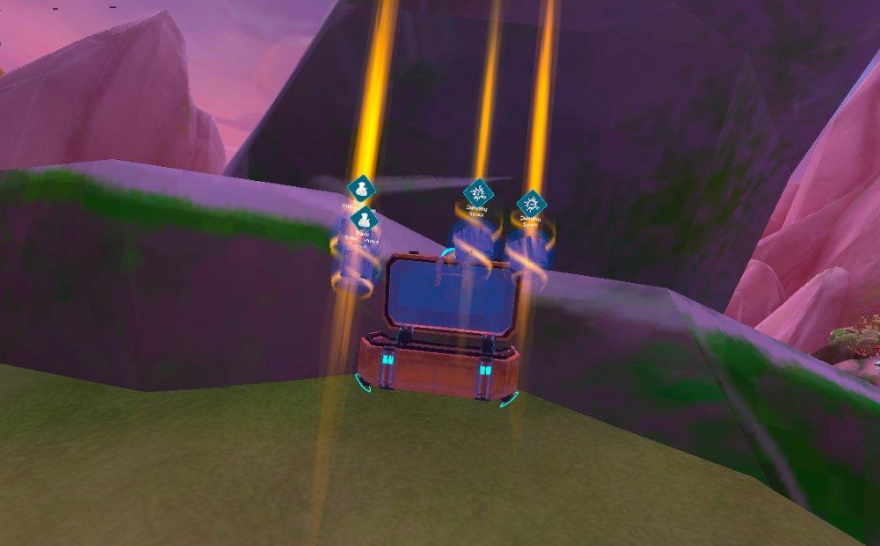 It’s actually very similar to Genshin Impact in feel, only with lower graphical depth and much more of a sense of being in the space. In fact, that aspect of being in VR made exploration way more engaging than it otherwise would be. I’m pretty sure I would be bored to tears if I was doing this in a “typical” MMORPG.

That said, I also did find myself feeling a little starved for reasons to really amble around. The treasure chests I’ve found to this point don’t really have particularly interesting loot in them, and as I mentioned earlier I’m not sure how important these crystal tear-shaped things are. I have to assume that the fact they’re tucked away so well means they have some major importance. Also, as nice as the views may be at great heights, I also have to admit that there weren’t many landmarks around that piqued my curiosity.

Then, of course, there were those themepark MMO walls that I alluded to earlier. As many tools for traversal as I had available to me, Zenith is still a game where enemy levels and character levels are a thing, and my wandering at one point put me face to face with a level 27 pirate who easily skewered my level 5 face. 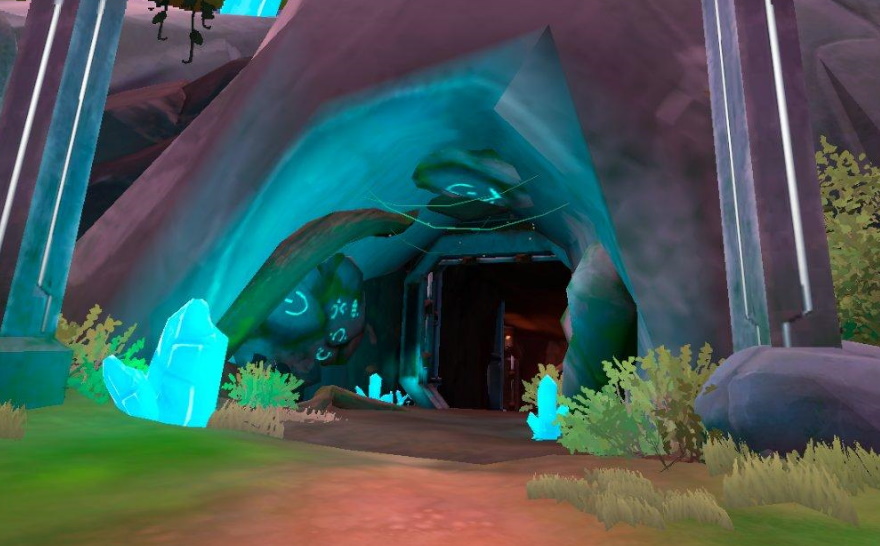 So, yes, exploration is a thing in this game, but only a little bit. I would love for this all to feel more rewarding from a mechanical standpoint; as it is right now, there’s not many incentives to really break away from the beaten path in terms of XP or impressive rewards, and the starter zone, as nice as it may look, didn’t really have many sights on the horizon that made me want to go exploring.

It wasn’t a complete waste of time at least, as the opening zone is still full of lots of people running around. Once again, keeping voice comms open was equal parts amusing and brow-furrowing, with ambient conversations ranging between foul-mouthed and menial, though nothing I overheard or experienced again was truly vile. One person walked up to me while I was looking at my inventory and asked me if I like monkeys. Another person taught me how to glitch myself so I could climb up into thin air.

For the most part, I kept myself generally amused as I soaked in the ambient chatter, walked in a bunch of circles, occasionally ticked off items in my to-do list, and tried out systems that I haven’t really learned specifically. I actually managed to (eventually) use the cooking station to make a cookie, which was equal parts entertaining and a little weird while also being altogether engaging. 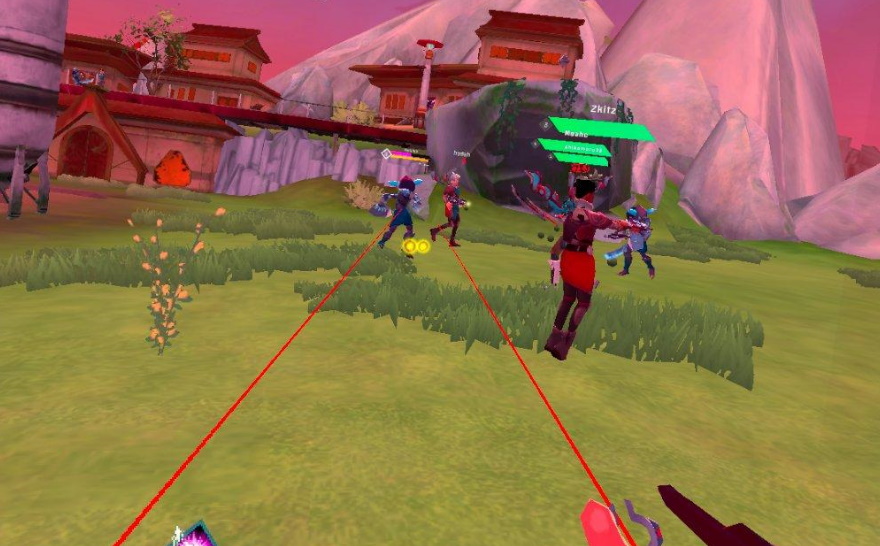 I still think I’ve got one more week of this game I can squeeze out, but this time I’m making an executive decision and am going to roll a Blademaster instead. The more I try to cast spells as a mage in this game, the more I hate it, and if I’m going to move my arms around, I want to use weapons instead of blasters and janky spell summon gestures. So basically, the next week’s report will be of my own volition. That said, that doesn’t mean I’m not having polls this week!

Since February is almost done with, I figure It’s time to plan our next adventure, and with Global Agenda stealth-returning to Steam, I was inspired to make next month’s adventure all about “undead games”: Those MMOs that are still shuffling along against all odds and (possibly) all reason. Thus, poll question one:

What game should we raise from the dead? Choose My Necromantic Adventure!

The second poll question is once again asking about a future series of columns, but narrowing down the focus into VR gaming once more. Specifically, whether people would be interested in some week-to-week voting and adventuring in the other VR MMORPG, OrbusVR.

Should we peek into OrbusVR in the future? 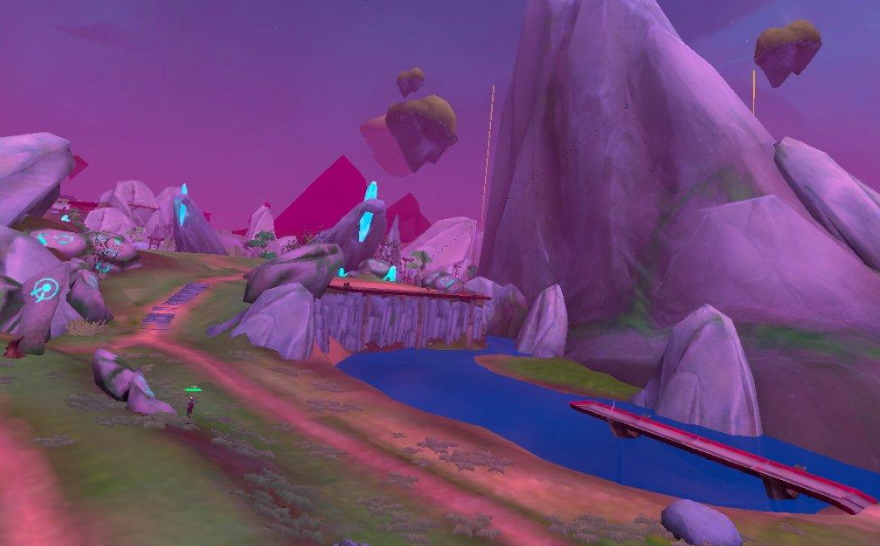 Like always, polling will wrap up at 1:00 p.m. EST this coming Friday, February 25th. Until then, it’s time to put this Essence Mage on the shelf for the time being.