After several weeks of slogging my way through classic The Secret World, I now find our readers have dispatched me to Secret World Legends. And sure enough, it was even more challenging to get in to than the original game.

Upon firing the game up, I immediately was greeted by a level 37 character, so I was indeed further along than with the original game. I also was immediately reminded of my penchant for using the shotgun almost religiously in both versions of the game, as my character was a Gunslinger. Still, I wasn’t immediately fussed by the choice and was more interested in answering the important question of whether people were still around. 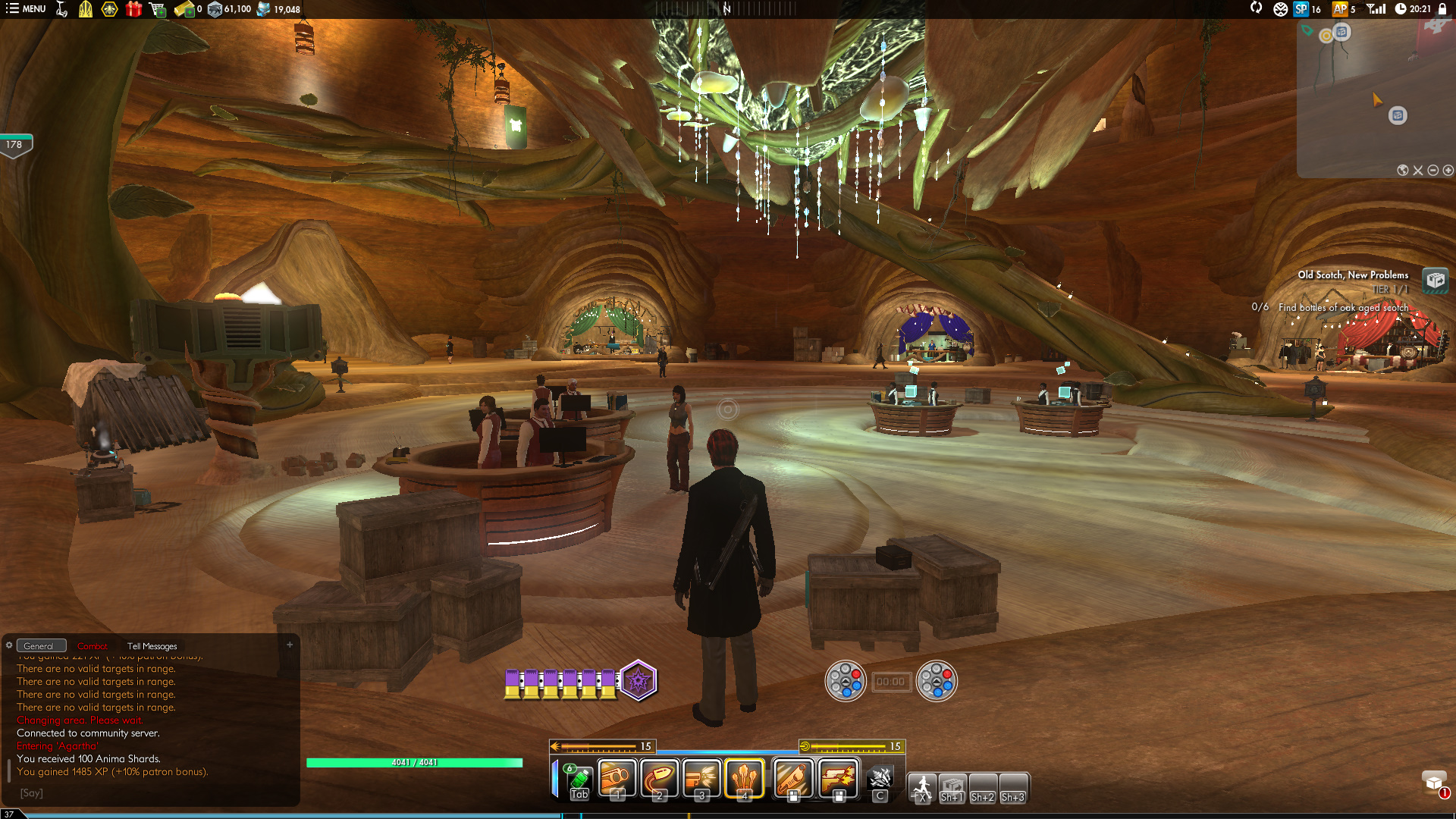 I immediately ported over to Agartha from where I was standing in Egypt, and sure enough, there were a couple of level 50s milling about the central area. What a relief. I wasn’t really looking at any chat, but I was happy to watch a couple of people doing their thing at the NPCs around here, along with one person puttering around on the steampunk wings travel power thing. It was such a relief that I actually just stood there for a moment, absorbing the ambience like a vampire.

Eventually, though, I had to press on and figure out just what the heck I was up to with both my character and my build. I was wrestling that bear of coming back to a long-lost MMO, staring at UI elements and my ability bar button layout, trying to remember what I was doing and how this made sense to past me.

And then the game crashed. 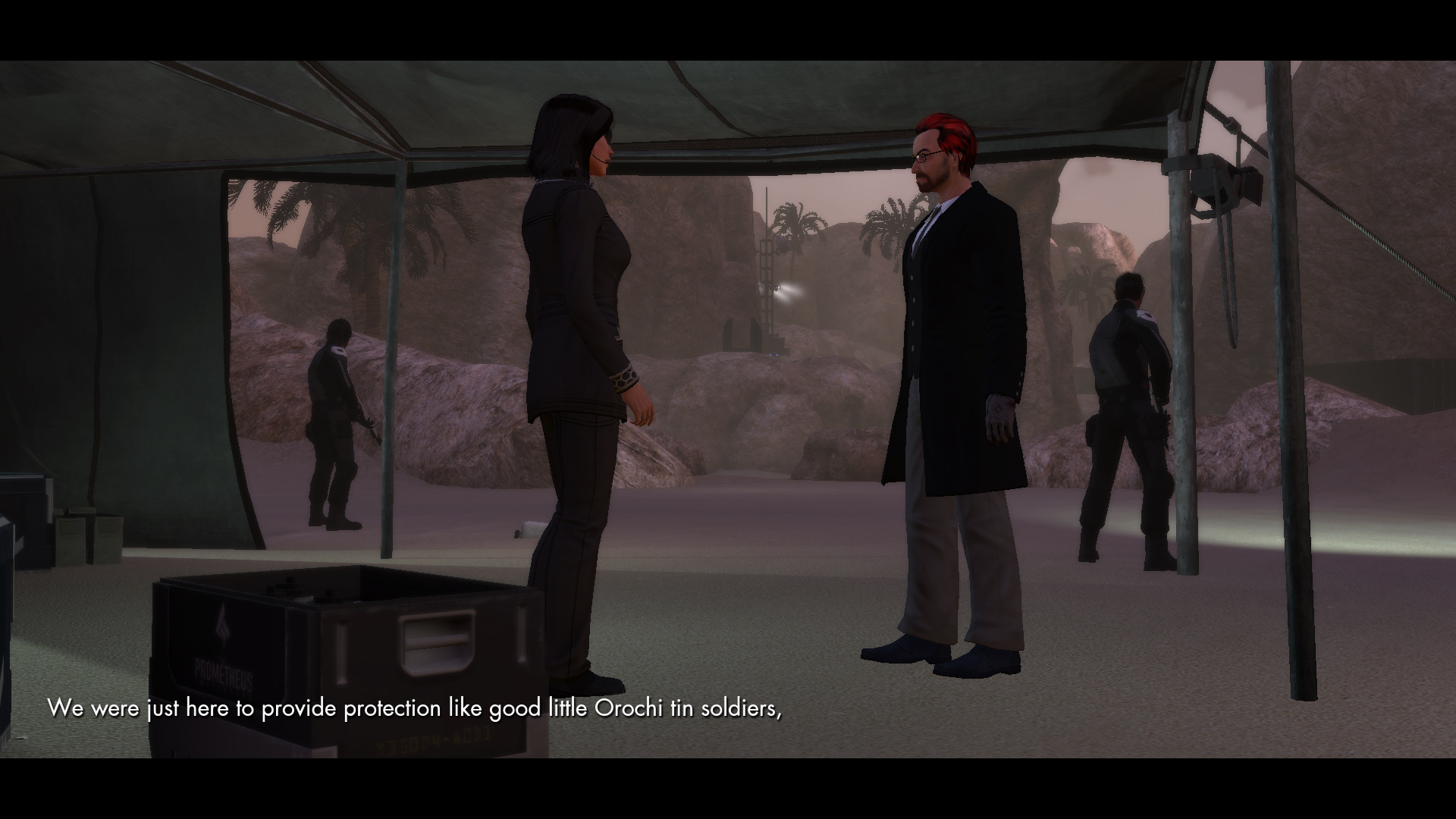 Booting it back up, I decided that perhaps the best course of action would be to pick up a random quest, get into a few fights, and see if maybe something resembling muscle memory would return to me. I listened to an Orochi employee monologue, headed out into a Filth-infested area of the desert, and tried to sort out what buttons were best, combining active skill use with tooltip reading to try and puzzle things out. It wasn’t helping.

To be fair, most of the blame can certainly fall on me, but I also believe some fault lies with SWL’s ability model. There are at least a couple of interesting ideas here like the Anima UI that let me lean into DPS, tanking, or support, but for the most part the pistols/shotgun combo I had wasn’t really making obvious sense. It was further exacerbated by the fact that blowing off shotgun rounds required a reloading for either fire, healing, or purple (chaos?) effects. I genuinely forgot all about this mechanic.

Coming directly from TSW to SWL, I can greater appreciate how people didn’t like the latter over the former. Sure, the Deck system in TSW is pretty guided as well, but it also feels a bit more like it makes sense, and the Ability Wheel system allows for a bit more freedom. Here, I was lock step into whatever decisions past me made, and I didn’t feel like I had any recourse.

Except, of course, to start from scratch. Which I did. 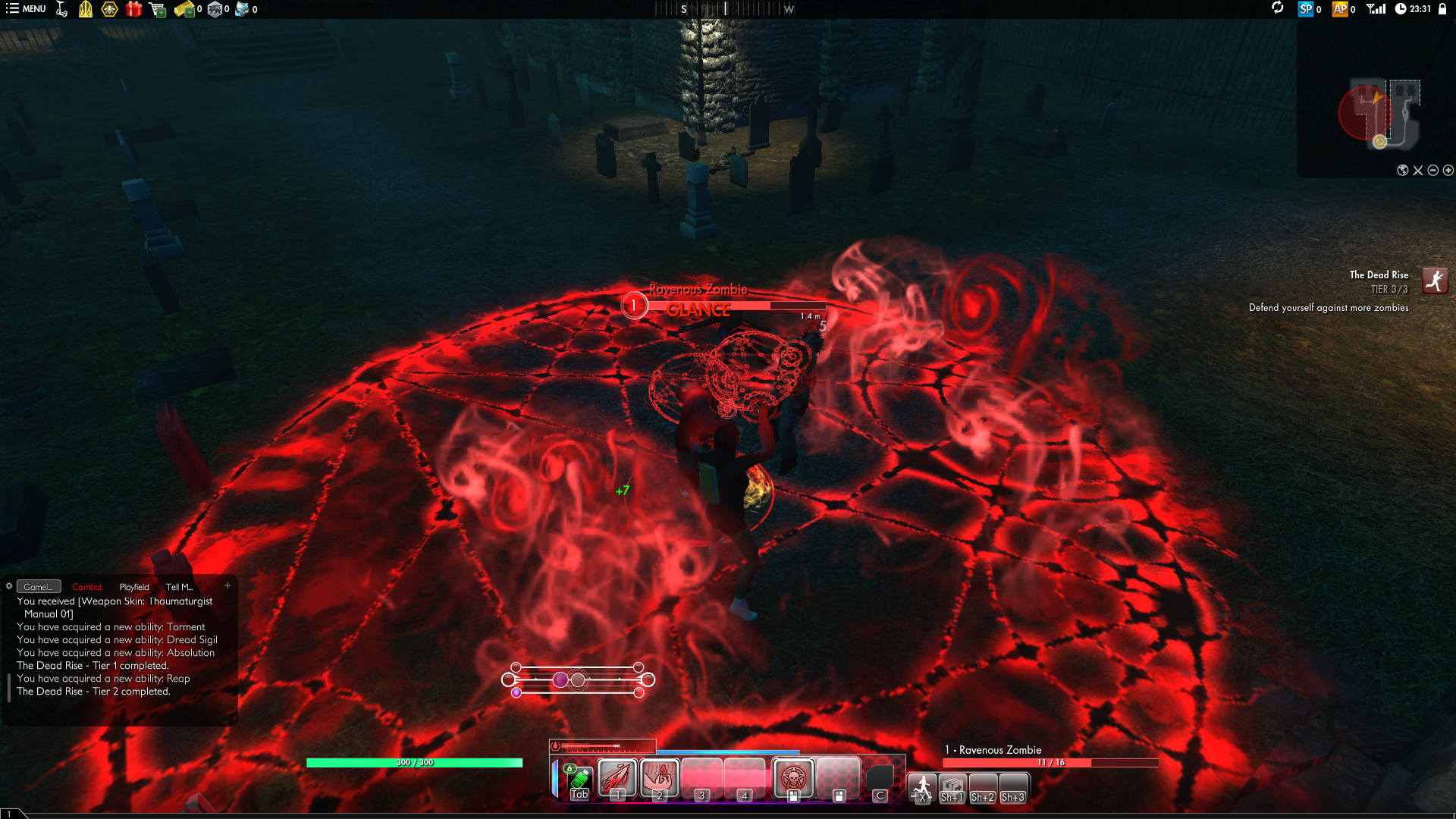 Here, I was greeted with the weird dichotomy of the familiar and the new, this conflicting combination of the intriguing opening of the original game with some almost sarcastic-feeling levels of guidance and handholding. I elected to try the Warlock class out, owing to the idea that magic and an assault rifle as a healer would maybe be intriguing.

Sure enough, at least as SWL’s Blood Focus goes, there was some interest there, as having to balance between corruption and martyrdom was a unique line to toe. Also, some of the spell effects looked a lot more interesting.

However, the opening beats that had some sense of mystery in TSW felt sort of overshadowed in the tutorial portion of SWL. It did its job effectively, to be fair, but at the same time, the sample investigation mission and stealth mission felt like I was being read to at a kindergarten level while being capable of understanding Shakespeare. It was kind of infuriating.

And then the game crashed again.

I pushed forward a little bit further, got past the tutorial segment when the big spooky street Cthulu smashed me, then continued on with the Dragon’s opening portion, kind of trying to get through the introductory stuff once more.

And then the game crashed again. 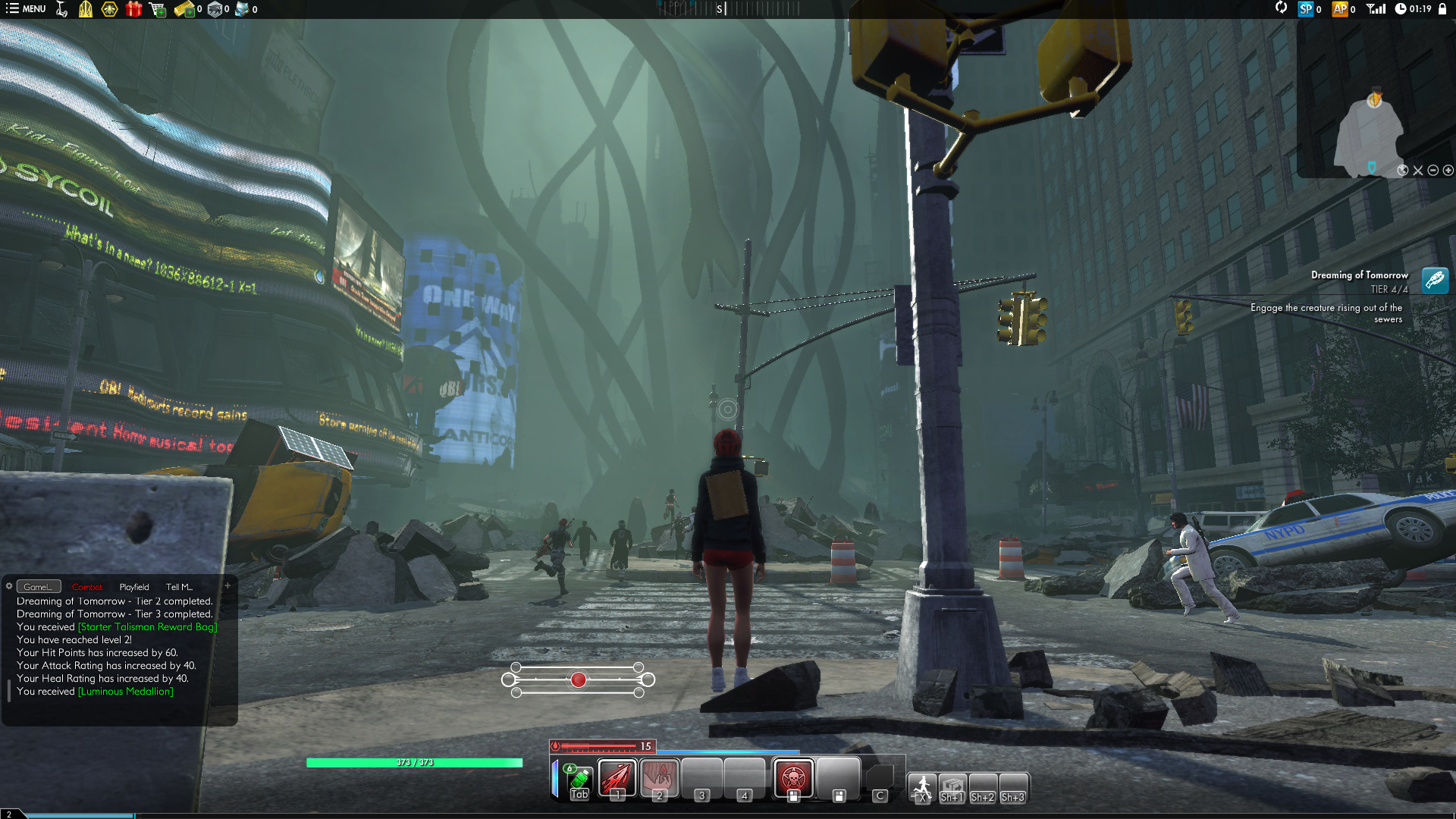 I’m pretty sure this was something wrong with the game running in borderless window mode than anything else, or perhaps I was doing something wrong, but by this point I had stopped caring. I uninstalled the game and sat there trying to process my feelings about the whole ordeal. I was upset. With myself, with Funcom, with the game. And I wasn’t sure why… until I considered Eliot’s recent Vague Patch Notes, the one about liking the idea of a game instead of the reality of it.

Granted, seeing other people in SWL was wonderful, even if it was just a couple of wandering folks, but I think I truly have moved past this game much like Funcom has to the point that the idea of this IP is just way more engaging than the reality of it. The original is far too barren, and the remake is far too weird, highlighting the inherent jank in the elder game.

I hasten to add that this doesn’t make TSW bad, exactly. I appreciate the old beast and have come to grips with the weird stuff it does, but I also have to appreciate that this game is in my past and that I should just move on. It’s OK to hold on to a warm, pleasant idea of an old game sometimes, but there are also times where you really just can’t go home again. That still doesn’t mean it’s not kind of depressing to report, though.

Well, now that I’ve thoroughly made myself sad, it’s time to do that whole moving on thing and look ahead to the next adventure in Albion Online. I’ve been here once before, but the game has also added on enough that I suspect it could still seem like it’s new. Then again, I’m pretty sure I still have that old character, and why wouldn’t I want to start with a slight leg up? So that’s the poll for this week:

What should I do upon entering Albion Online? 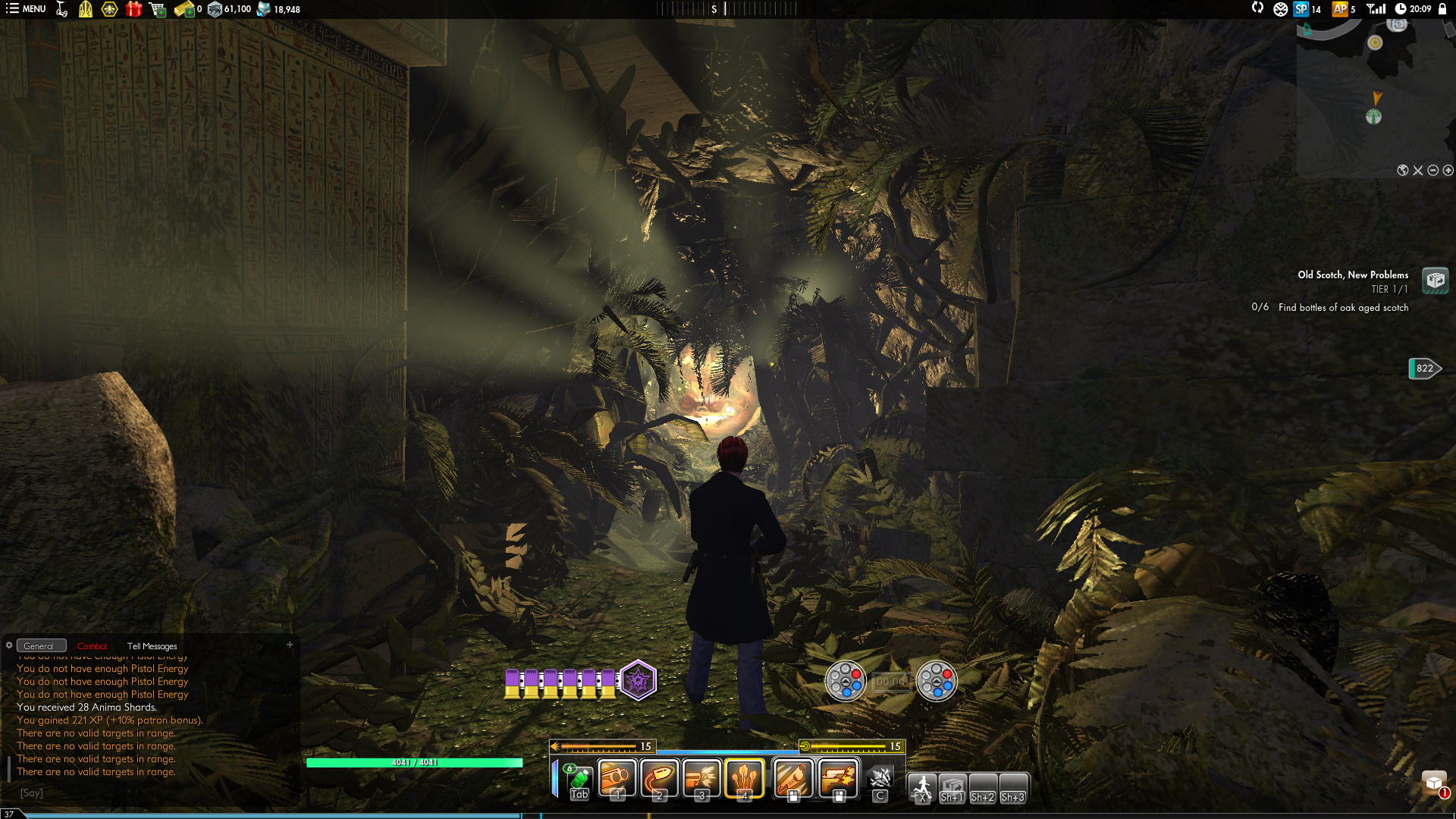 As always, polling wraps up on Friday, April 1st, at 1:00 p.m. EDT (no foolin’). Once again, I apologize for this series being more dour than I usually like to share, but I’d rather be honest with myself and with all of you than not. And please don’t let my own lack of enjoyment stop you from loving this game.