At what point does a player’s actions in a beta test go beyond the scope of testing and into bannable offense territory? That’s the question being wrangled by the community of Fractured Online and the MMORPG fanbase at large, as the devs have permanently banned members of a guild for using a memory hack to provide an unfair advantage in PvP.

The players have been permanently banned from the game over a hack that allowed them to bypass limits for spells and talents, letting them supercharge their characters into having over 200 talents instead of 60. The matter in question was discussed in the game’s official Discord by Dynamight CEO Jacopo Gallelli: 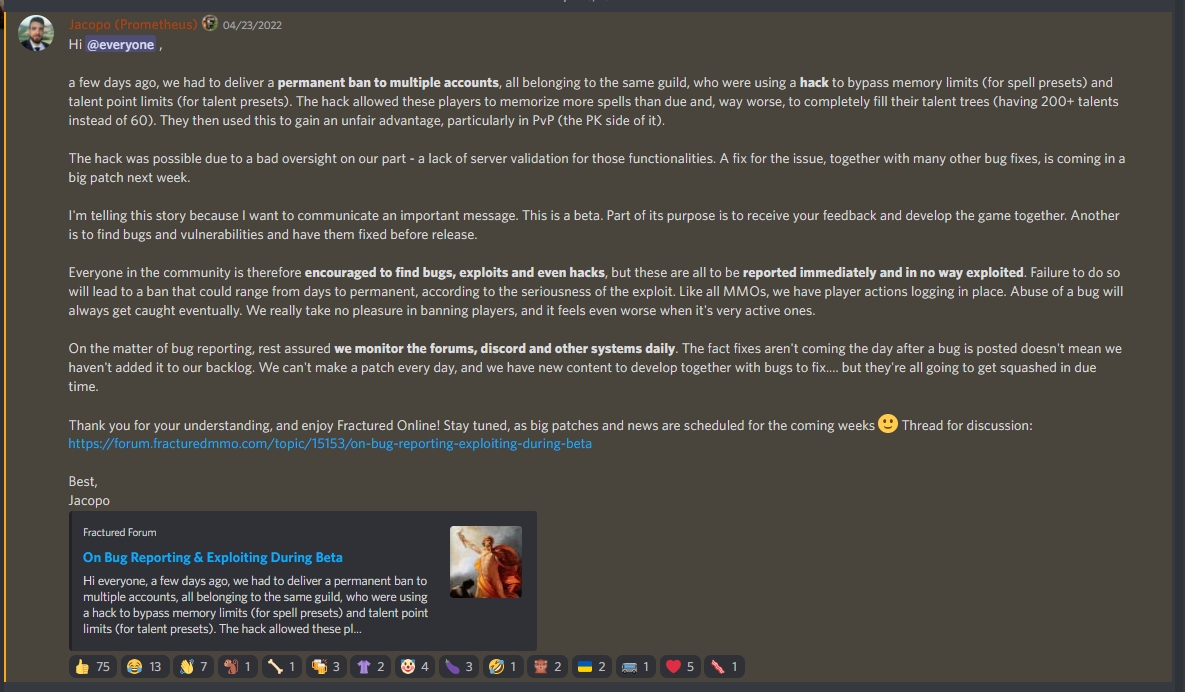 According to players, the offending guild in question has been railing against Fractured for its stringent controls on PKing, saying that “PvE carebears” will ruin the game due to having too much of an advantage.

This matter has reportedly started something of a fiery discussion among Fractured fans: Many players have come to the defense of the guild members in question, arguing that the purpose of a beta test is to find exploits precisely like this one, and one member of the guild even claims that Dynamight was informed of the hack as far back as 2020. Still others back the studio, saying that the guild’s actions were a punishment against the devs for making the sandbox too “carebear friendly,” and pointing out how guild members lied about why they were undefeatable and further elected to not report the exploit during beta.

Regardless, it should be harder for players to exploit this way in the future. “The hack was possible due to a bad oversight on our part – a lack of server validation for those functionalities,” Dynamight wrote on its forums. “A fix for the issue, together with many other bug fixes, is coming in a big patch next week.”

source: Official forums, Discord, Reddit, with thanks to Clowd for the tip!
Advertisement