(We’ve updated this end of this article with the latest developments, which include the CM retracting her claim of workplace sexual harassment.)

Another potential sexual harassment scandal has erupted in the MMOverse, this time in a rather unlikely indie studio: Artix Entertainment, which runs Kickstarted MMORPG AdventureQuest 3D.

Former Artix Entertainment community manager Taini Flaremist alleges that a fellow Artix developer with whom she was very close used their private discussions to take advantage of her “emotional vulnerability” and ultimately engage in “sexual harassment.” (No one directly involved has named names, and indeed Flaremist herself is using a pseudonym alt account on Twitter.) According to Flaremist, this dev “made inappropriate/sexual comments towards [her] several times, even after admitting they were in a relationship during this time,” from September of last year through January of this year. While her initial letter doesn’t specify, she later claimed on Twitter that this dev “got really drunk and called [her] a whore on and off for hours after.” When Flaremist came forward, she says Artix’s leadership team was ineffective at sorting it out.

“When this information, with screenshots/proof, was brought forward to my leads, they chose to do nothing,” she says. “There will be a time where I can and WILL share the full details about what happened, and I hope that you are still here when I do.” Flaremist further alleges that Artix Entertainment bosses asked her to take a month off to “recoup” before deciding whether or not she would be willing to continue to work with the developer in question. She also accuses Artix Entertainment of “offer[ing] her self help books” and tapes. Eventually, according to her timeline of events, she announced her resignation.

Adam “ArtixKrieger” Bohn, Artix’s CEO, has since penned a statement acknowledging his disappointment at Flaremist’s resignation and attempting to clarify the story from his point of view. Bohn says that leadership learned about the “relationship” between Taini and a developer whom Bohn characterizes as a junior dev at the end of 2021. [Artix has since clarified to MOP that neither of these devs ever met in person.]

“By the time we learned of it, it had already ended, and both of them were able to continue working together,” Bohn writes. “At the beginning of this year, we learned that Taini had begun to feel uncomfortable working with the developer. As soon as we learned of that, we took immediate action to investigate. We spoke with them both to understand what was happening and resolve the situation. By the end of the talks, both were still interested in working together and as far as we knew, that was the end of it.”

The storyline gets incredibly muddled here, frankly, but if we’ve understood it right, it sounds as if Flaremist leaked private messages from another Artix staffer, Rellik, which disparaged the developer in question, and said she could no longer work with said developer. Bohn says this would’ve created “a terrible situation, because a game’s Community Manager needs to be able to work alongside the rest of the team.” It’s not entirely clear whether this was communicated to Flaremist before her resignation. [Bohn has since clarified in an update that Artix’s request that Flaremist take a month of paid leave was a “direct result of her ‘unprofessional decision'”.] [Artix has since clarified to MOP that it was not the leak that constituted the “unprofessional decision” for which Flaremist was put on leave but rather a change she made to the dev’s name in Discord. We told you this was muddled!]

Notably, Bohn continues to refer to the situation as a “private relationship outside of work” and does not appear to concede that any sexual harassment took place.

“I’m sure that slanderous things are going to fly, as that is the nature of these emotionally-charged situations. But the facts remain the same. Two consenting adults who were both team members, both of roughly equal rank, had a private relationship outside of work. When we were made aware that she was uncomfortable, we took action with both parties to resolve the situation. No matter what other rumors start flying, that is what happened.”

Flaremist has disputed some of Bohn’s commentary, saying that she and the other dev were not of “equal rank,” as according to her that dev was paid an alleged $70,000-$80,000 per year while she made $500 a month (regardless of whether her position is underpaid, it’s certainly hard to argue it’s the same rank as a salaried dev). She says that she wasn’t told until two weeks in that the month of leave she was being asked to take would be paid. She also claims that Artix Entertainment “did nothing” in response to her demand to “remove [the dev in question] from [her] main work channel.” “This team member was not reprimanded, not demoted or removed from work channels, nothing,” she argues. She, on the other hand, says she’d resigned herself to “letting it slide to keep the peace.” The whole thread is chock-full of cropped chats and even an unrelated accusation that Artix had offered to help her with vet bills but forgot when her cat died.

“You know what’s the saddest part of like this whole situation? I didn’t even ask for him to be fired or demoted at all originally. I literally just asked for him to be removed from the Community Management channel so I could work without being around him. That’s it. Yes, that means if they removed him, I would probably just buried all of what happened to me and continued to work there. For y’all, because I love you. Then came the dismissal, the self help books, the stories. That’s not something I can forgive…”

The AdventureQuest franchise Discord and Reddit are in disarray as fans debate the credibility of the accusations and chats still leaking, demand accountability for developers and the studio, and try to sort out their own relationship with the company going forward. As our tipster notes, Artix Entertainment is currently in the midst of planning a Kickstarter to fund the Unity remake of the 2-D Flash-based AdventureQuest Worlds.

We have reached out to Taini to ask if she would be willing to discuss a peaceful resolution to this situation and hear her thoughts on the actions we will be taking internally. 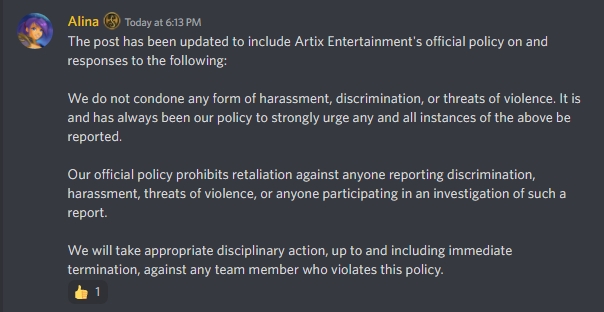 Flaremist herself said she would be deleting the tweets she made earlier this week lodging the accusations; her part of the letter to the community apologizes for causing “distress” and says she “did not want Artix Entertainment to crash and burn.”

“I want to repeat that no, the harassment was not happening in the staff server,” she writes. “It was not happening in the community server. My leads were not watching this happen and ignoring it. I had to explain that it happened in private. I recognize that as a contractor I do not have what are considered traditional working hours, so I understand the validity in the phrase that it did not happen on work hours. […] The messages the other developer I was sent were unwanted and inappropriate, and because we had had a personal relationship, some of them were of a sexual nature but I never claimed they rose to the level of sexual harassment in my original document. On Twitter, the term ‘sexual harassment’ started being used. I got caught up in the moment and used it as well.”

“This situation has led to us updating policies to make sure that all our team members know the resources available to them if they should ever encounter a situation that makes them uncomfortable,” Bohn says. “And furthermore, we are now addressing some of the deeper issues mentioned above.”