If you’ve been angling to play EVE Online from the comfort of your couch or bed or car or treehouse or whatever without needing a full-on PC or laptop, then the release of EVE Anywhere today has your name all over it.

“EVE Anywhere has been developed in close collaboration with our trusted partner Intel, and allows you to play EVE on the go through Chrome, Safari, Firefox and Edge – whether you’re on a PC or tablet. This partnership provides EVE pilots with access to high-capacity computing power – via the cloud – as and when it’s needed. Whether you’re fighting, mining, or building an industrial empire, EVE Anywhere can help you switch seamlessly between client and browser-based play.”

There’s a catch: It comes with a fee, though players on Reddit are suggesting that if you’re already paying for an EVE Omega sub, the service is included without extra cost. “Alpha players can enjoy 24 hours of EVE Anywhere in exchange for 30 PLEX,” says CCP, which also promises to add access for more territories “later on this year.”

Source: Official site. Browserfy is too a word. 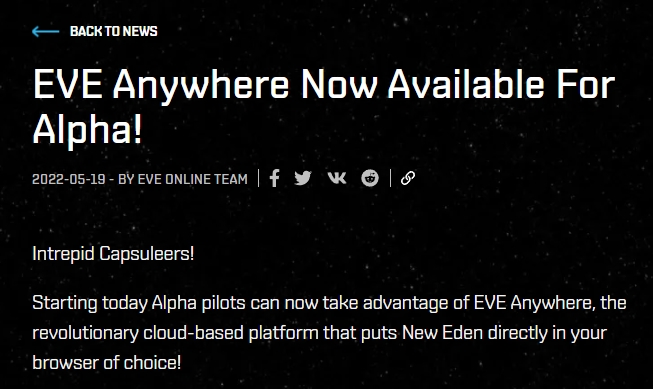