There’s something extremely valuable in hitting a reset button when you’re able to. Failure is always an option in MMOs and multiplayer titles, to be sure, but sometimes you have to ball up what you were doing before and start from scratch, learning from the prior mistakes of an initial run and applying those lessons in a more “serious” attempt. That’s kind of what’s gone down between me and V Rising; previously I had just cobbled together a character without too much mental and emotional attachment built up, assuming I was going to just use the toon for an hour’s worth of streaming and be done with it.

Obviously, the Choose My Adventure Polling Gods had other plans as I made my return trip to this vampiric survivalbox, and I have to say that this second go around is going a whole lot better than I expected. I was coming into the whole affair with more knowledge about combat, skills, and progression, which culminated in me spending lest time wandering around like an easily distracted moth as I fluttered from one shiny thing to the next.

In a matter of a few hours, I had myself set up with an initial base camp, figuring out the previously obtuse castle heart placement problems I was running in to from the outset, then planning out my new home with a little bit more care and caution. It didn’t really take me too long to get myself past the point I was at when I first tried V Rising, and it overall flowed a lot better as I firmed up the connected mental dots. 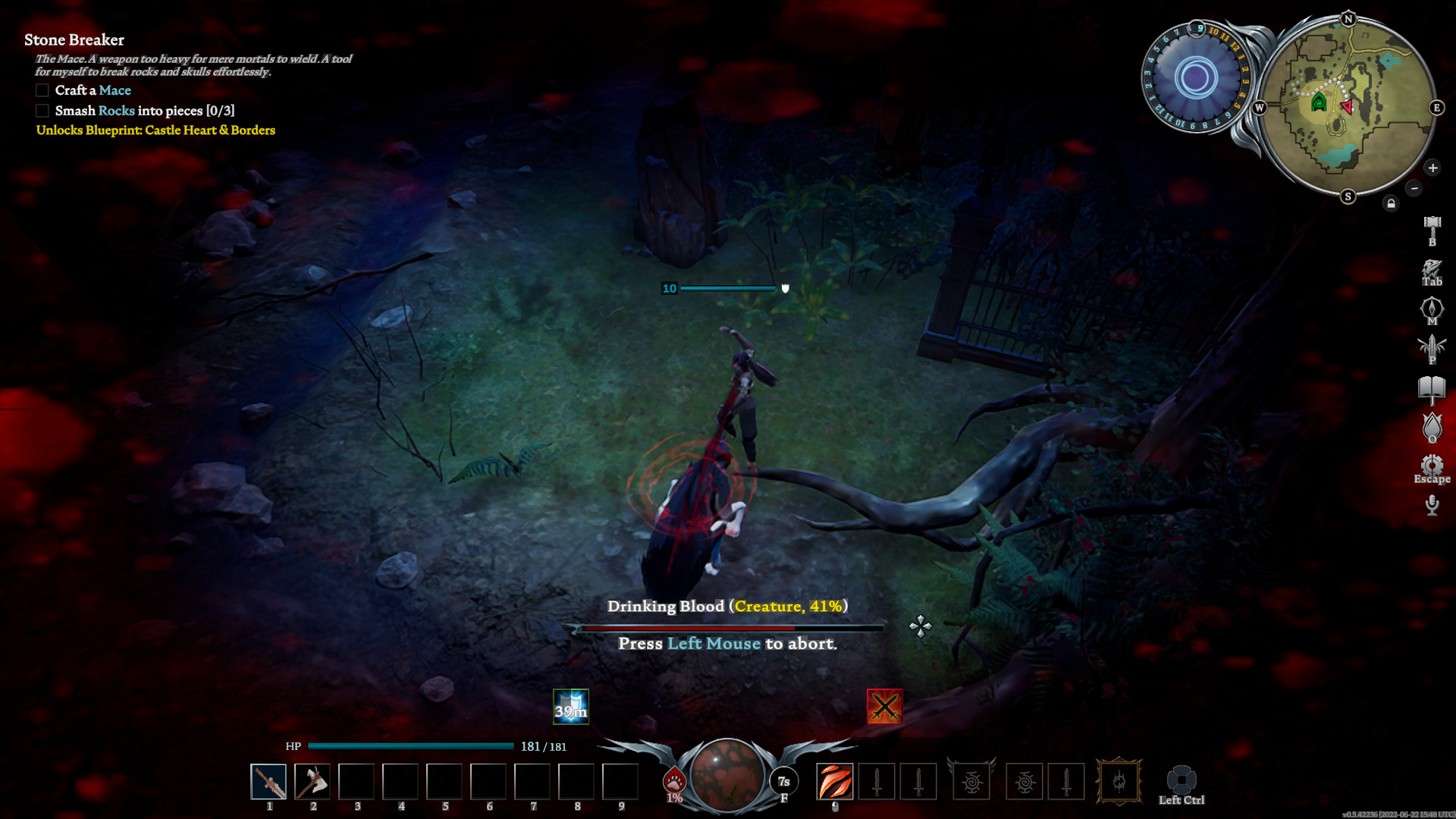 Of course, this is about the point where new survival sandbox contrivances began to rear their ugly head. I was constantly on the hunt for new materials in order to beef myself up to the point I could chase my first V Blood target. I started to come to the whims of RNG as I tried to pin down needed materials in certain locations but ultimately came up short or found the treadmill to be longer than expected. Tracking down a V Blood target was an annoying chore. Then there was the matter of keeping my castle heart topped up with blood – a housing decay system by any other name.

On the one hand, I completely get why this system is in place, particularly for a game where its server populations are kind of limited. On the other hand, house decay is one of the reasons why I utterly despise survival sandboxes and their inherent desire to find ways to kick down your sand castle. Granted, making sure I have enough blood essence to top off my thirsty, roofless, wooden shack of a “vampire’s castle” isn’t something that I’m finding particularly challenging, it’s just annoying. As usual, this sub-genre refuses to just let me have fun.

This is kind of annoying because there is a lot of fun to be had here otherwise. The vampiric aesthetic that soaks this game is a fun visual treat along with some intriguing mechanical wrinkles that being a vampire brings from a gameplay standpont; the combat is extremely fun, which probably won’t surprise anyone who’s played Battlerite, Stunlock’s other multiplayer title; and the progression systems are enough of a hook to keep me trying. Still, for every one fun thing V Rising seems to want to offer me, two contrivances that are tenets of the survival sandbox MMO try to hamstring me. 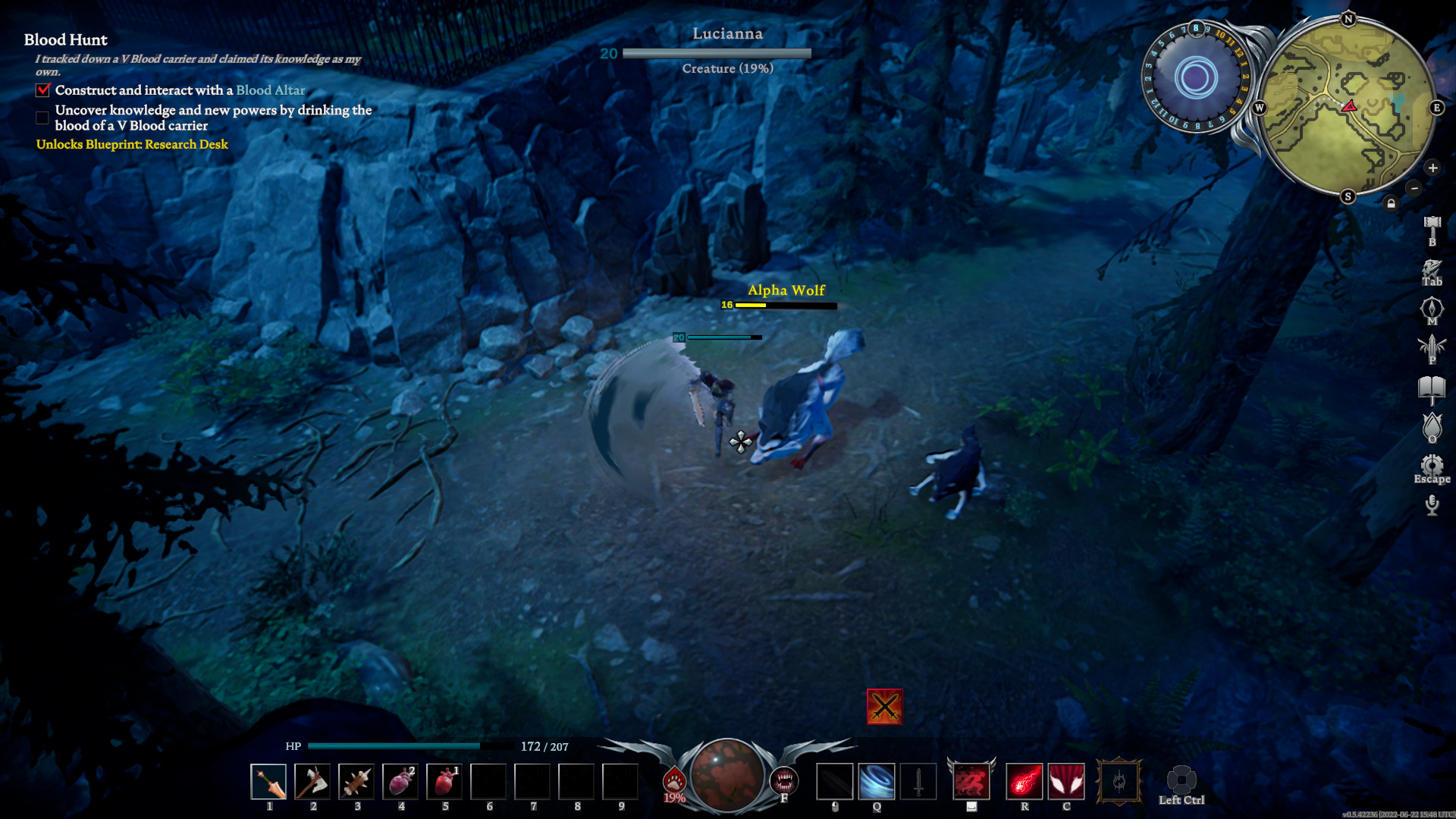 Still, I’m going to stick it out. The server I’m on – an RP PvP server – has some pretty well established players by the looks of it. I never ran into anyone in the wild (mercifully), but I did come across a couple of pretty impressive-looking castles, which definitely encourages me to maybe grind this out that bit more. Or maybe there are some systems in place that will make keeping blood essence filled easier; I did put down a vermin nest in the interest of trapping rats that I can juice in the blood press for some quick essence.

At the time of this writing, I’m kind of at a point where there are a few decisions to make, so that means we’ve got polls to suss out. Three of them, in fact! At this point, I’m at gear level 20, which has opened up three different V Blood targets to chase down next. Gear progression kind of demands that I go after Keely the Frost Archer on account of unlocking the ability to refine leather, but I’m open to suggestions, though I do reserve the right to change targets if things get a bit too spicy.

Who should be my next V Blood target?

The second poll seeks to address the stupid castle heart problem. On the one hand, as I said, feeding the heart with essence is tedious, forcing me to stop anything else I want to do in the interest of making sure I have enough juice to power my shack, but it’s not hard and doesn’t really take me too long. On the other hand, I could simply start my own server, setting drain parameters and other things to my liking, but then that also means I have to start over a third time, and I’m not sure I want to do that again. So I leave it up to you fine folks:

Should I address the castle heart problem or adapt to it?

The last poll is more a mechanical question for the regular players than anything else. My first priority when I started to get copper equipment was to get a shiny new sword, but now I’m trying to decide if I should get a copper mace to more easily get ores, or if I should focus on a copper spear to make hunting creatures easier. 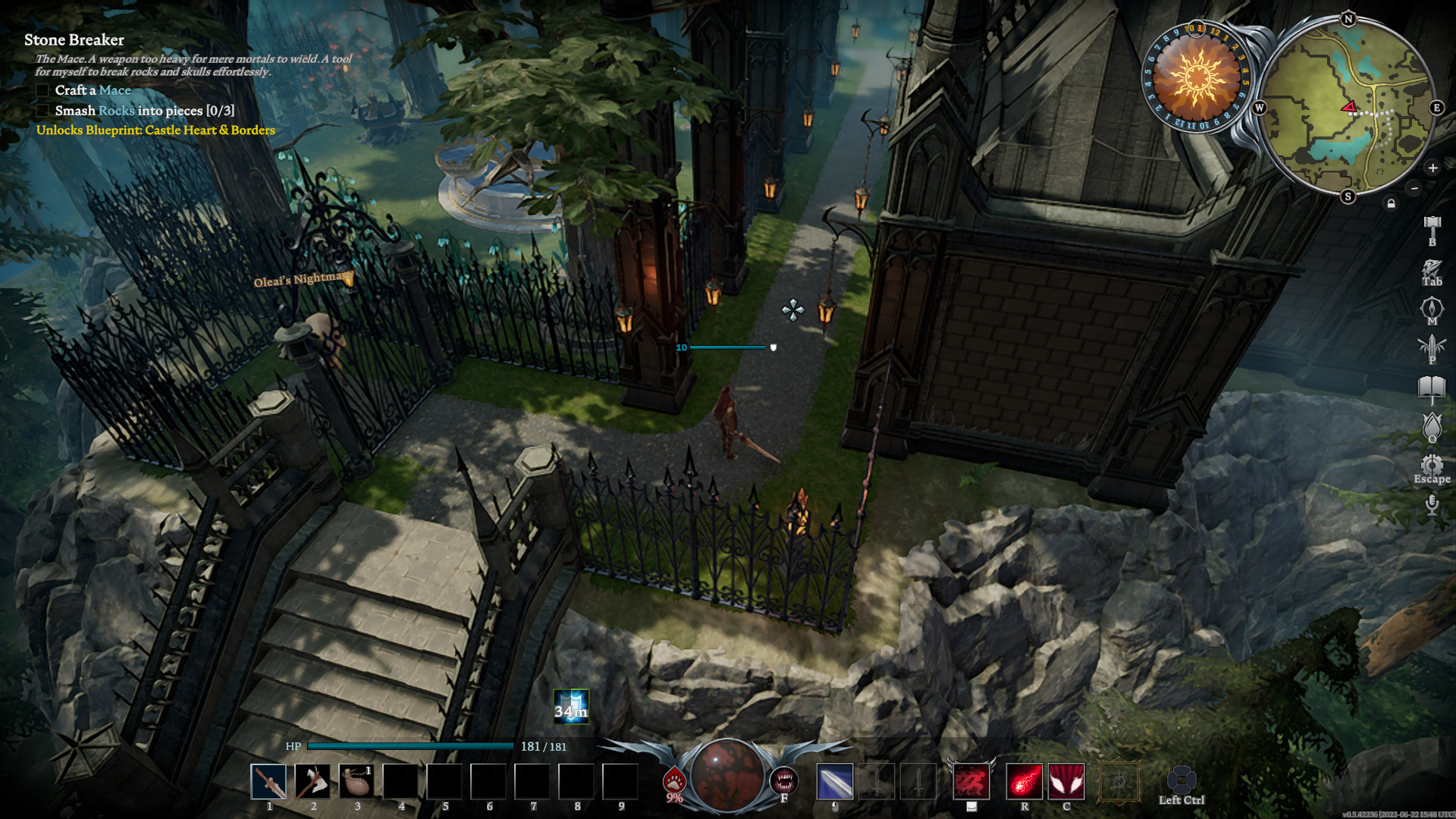 As ever, polling will wrap up at 1:00 p.m. EDT this coming Friday, July 1st. Until then, I’ll probably peek in from time to time in order to gather up more resources in anticipation of poll results and keep my castle heart topped up. It’d be a real shame if this barely defended wooden fort was shut down because I’m incapable of playing every single day.