This week, V Rising decided to remind me why I deeply dislike survival sandboxes.

It all started off pedestrian enough for the most part. Over the course of time, I managed to finally scrape together the materials needed to build a proper castle with stone and a roof and everything. It was nice to finally be rid of that mist brazier item, honestly.

As per the poll’s results, I took a moment to put together the fishing pole and do a spot of fishing. This was… fine, I guess. I was sort of hoping for a bit of a minigame, and I admit that I was using the item incorrectly a few times, but it took only a couple of misses (and a tooltip reading) before I started reeling in fish. And fish bones. And on a couple of occasions a headpiece that didn’t provide any stats whatsoever. But hey, I got a maid cap.

I would have kept on fishing but my primary fishing excursion was cut short by a lumbering stone golem. Rude. 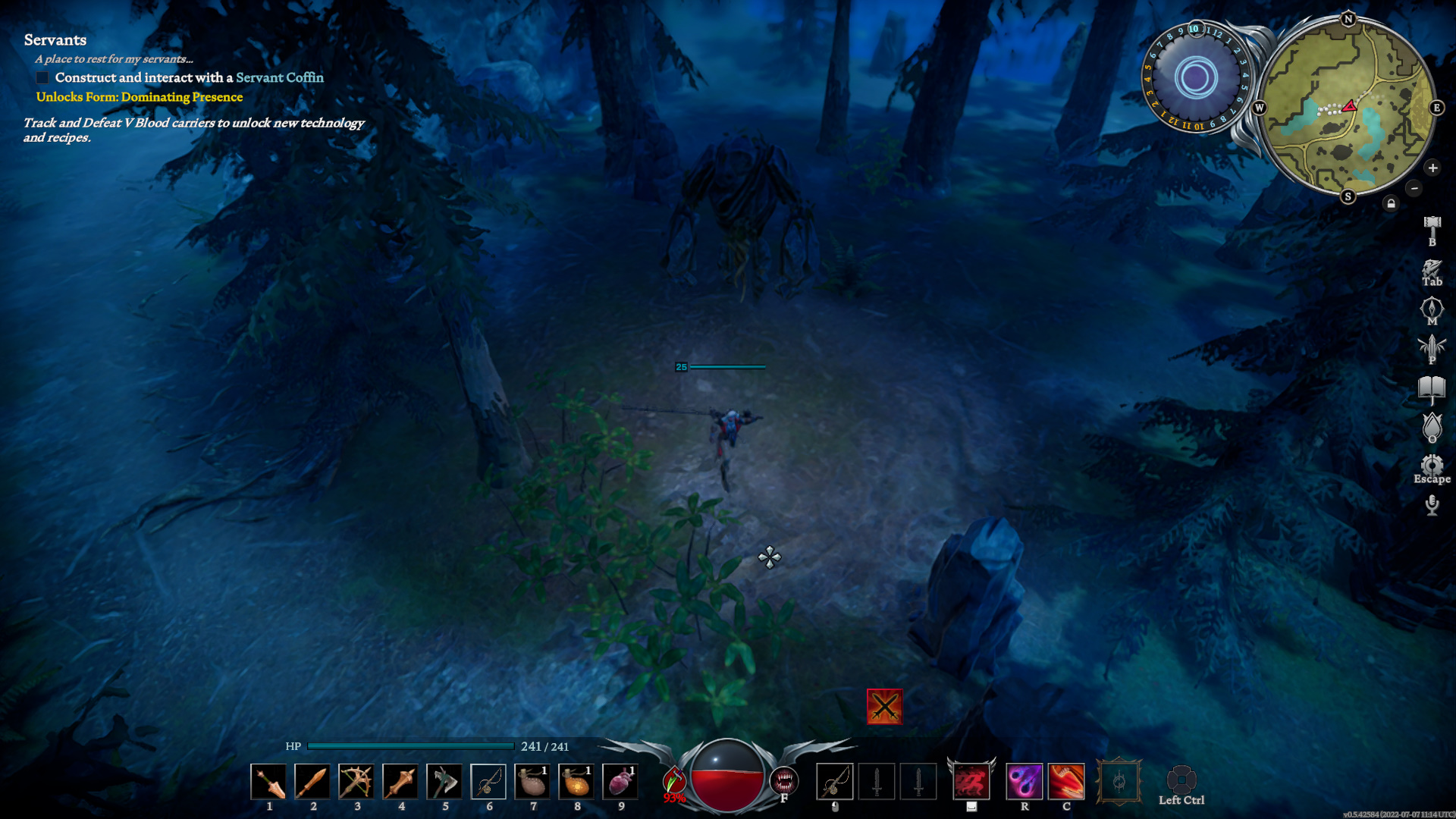 The fight against my targeted V Blood foe went extremely well, too. I started to get a bit more used to the crossbow and its firing cadence, and for once I became the ranged damage-dealing terror of the melee boss enemy. Sweet, sweet revenge was mine, as was his power, the big stash, and a whole bunch of copper ore.

That all sounds interesting on paper, but to be honest, it was kind of boring. I fell into that same old survivalbox drudgery of stopping anything I was trying to do in order to make sure I kept topped up on resources, meaning I slapped every rock in creation en route to the thing I wanted to do purely out of the programmed need to do it. I wasn’t eagerly looking for resources or looking forward to my next tech advancement; I was simply following conditioning.

On the subject of tech advancement, there appears to be an absolutely immense gulf in-between the copper tree and the iron tree. Looking through the V Blood target list while I stood around waiting for the sun to go down, I realized that some of the more interesting and empowering progression advancements were impossibly far away from my grasp, meaning I was going to be stuck using the same boring weapons and same boring armor for what felt like an eternity (no pun intended).

See, gathering resources and building up materials is fine and a perfectly salient hook for this kind of game, but that also kind of needs you to have something to work towards, and most of the immediately close unlocks for the V Blood target list read like they were completely useless. I could create floorboards for my workshop to make machines move faster, or learn how to create statues and fences, or create a tomb that just coughs up bones. None of these really was engaging or enticing to me. 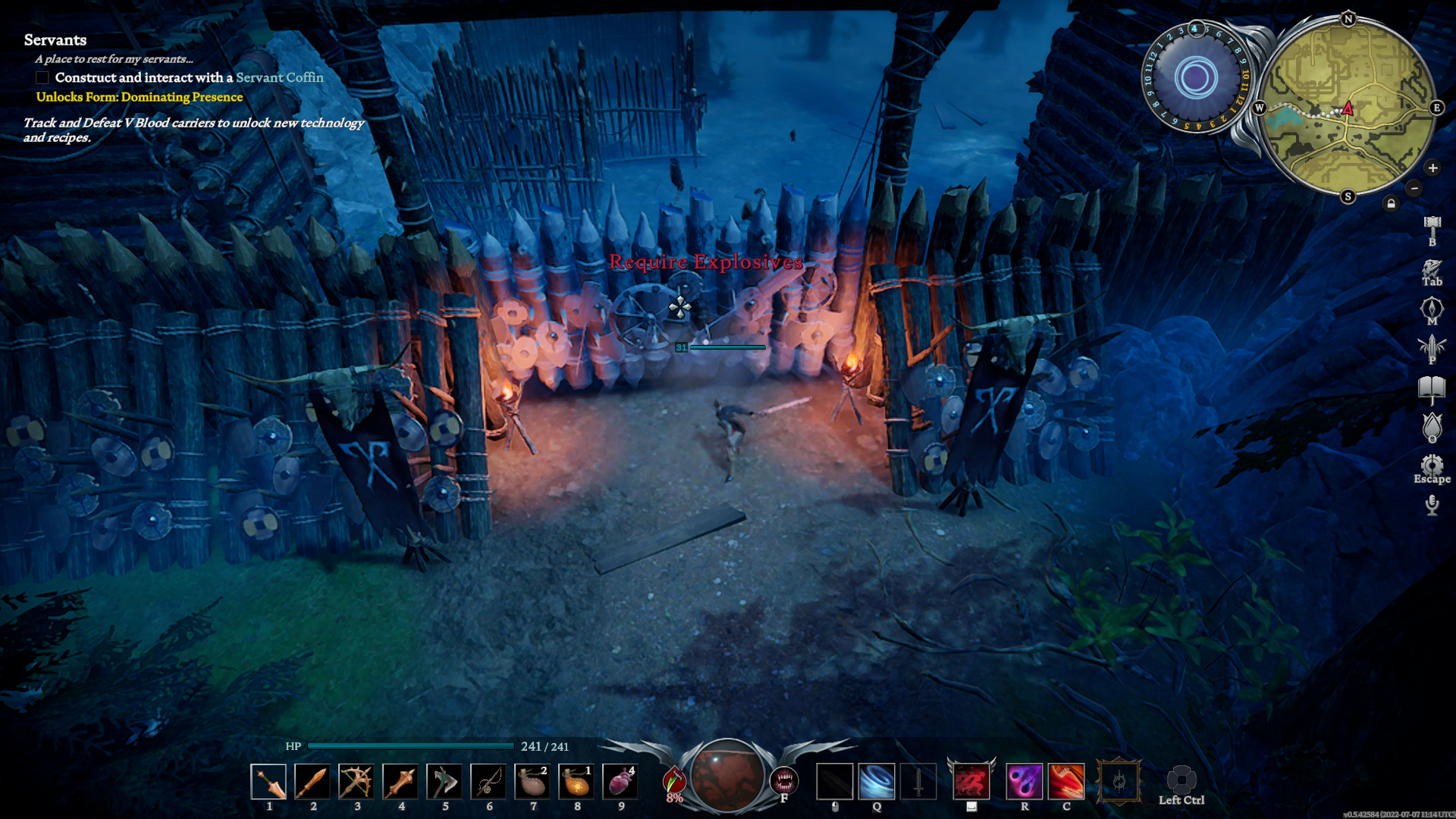 In order to alleviate some of my boredom, I decided to take a run around the area I was in to see if there were some points of interest or interesting monsters to fight. At one point I came across a bandit camp that could be entered only by using explosives on its door. I suddenly realized all that sulphur ore I was collecting had a use, but then it turns out I wasn’t going to be able to learn how to make explosives until I took down a level 30 V Blood target. Just another wall thrown in my way of having fun.

I reached my boiling point when I elected to try and take on Goreswine next. Once again, I was met with some pretty routine gameplay – hit rocks as I went, stand put long enough for the tracking wisp to guide me where to go, hope that the sun wasn’t going to rise and force me into a holding pattern – but when I actually started to engage the boss himself, it went downhill. Fast.

Let me tell you about Goreswine. He likes to use ranged magic. He likes to put down giant pools of goop that slow you down. He likes to have these enemies that constantly spawn smaller adds. He likes to have the entire graveyard where he’s located aggro you. All I ended up doing was running in a panic, trying to mitigate about a dozen mobs at once, with meager pieces of equipment simply because the progression curve isn’t smoothed out well, and no abilities or items that let me heal myself while I’m in combat.

This ended up being not only a difficulty spike but the point when I started to realize that maybe V Rising is a badly designed survival sandbox after all. Or at the very least I’d found a fight that’s tuned exclusively for multiplayer when I’m in a server that I’m pretty sure has been abandoned by everyone. 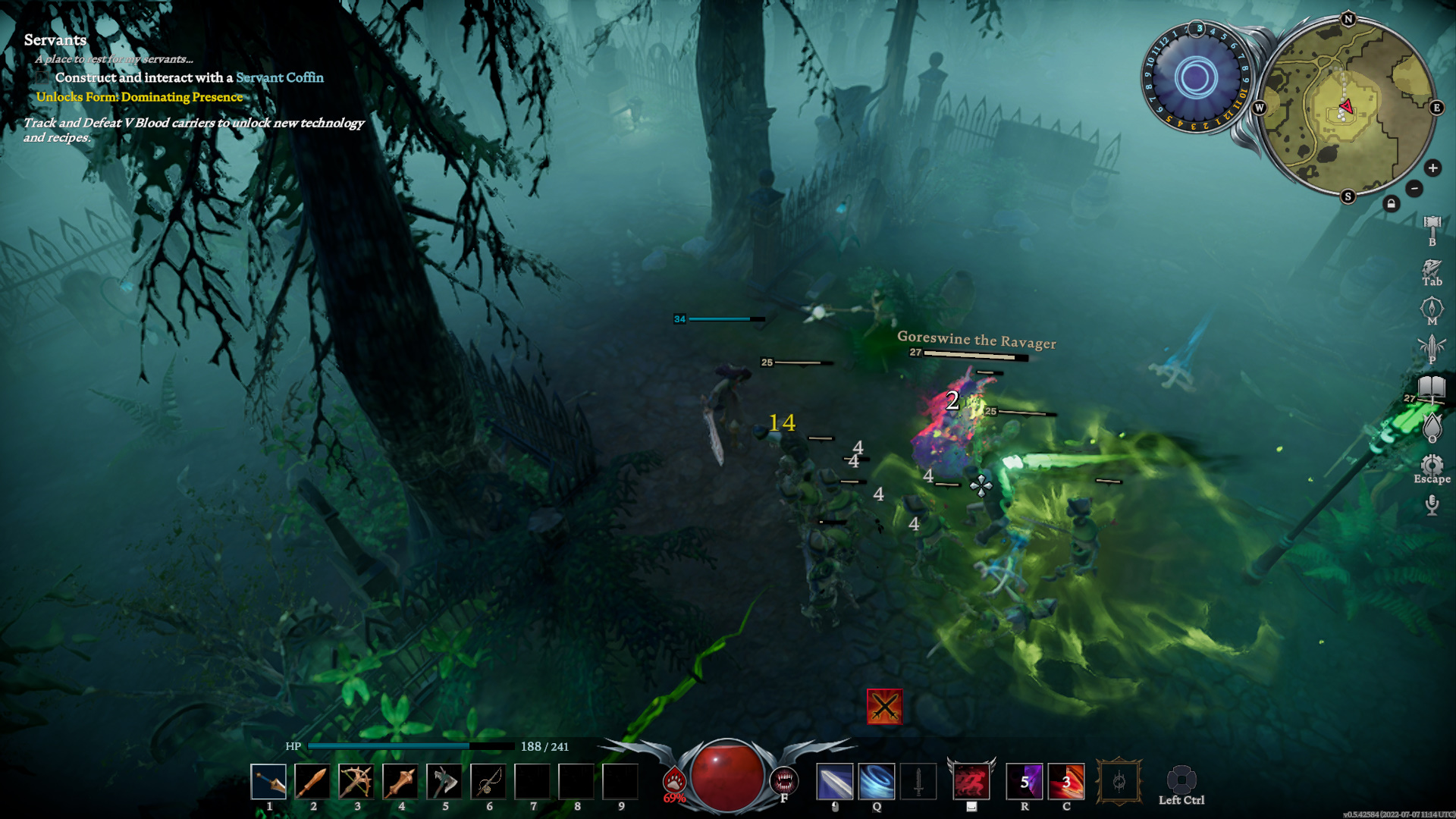 To be fair, I know there are things about this game that are fun. The aesthetic is great, when the combat model decides to feel balanced, fighting is fun, and vampire powers are cool. But at the same time, the aforementioned aesthetic is simply window dressing for all of the usual tired, uninspired, insipid, boring, aggravating, frustrating, annoying tenets of survival sandbox mechanics, all of which are made worse because I can’t really do anything a third of the time because the sun comes out.

I’m not necessarily asking to feel all-powerful, but vampires are meant to be monstrously strong, and all V Rising does is make me feel like I’m playing every single other crappy survival sandbox title in creation while wearing a vampire cape from Spirit Halloween.

To say that I’m at my wit’s end is probably an understatement, but I want to have at least one more week with this trash fire before I move on with my life (and away from survivalboxes in this column for a very long while). So, let’s get these next couple of polls out of the way, shall we? The first one is probably obvious by now:

Who's next on the V Blood checklist (that isn't Goreswine)?

There is a second poll, and it’s kind of a silly one, I admit, but I figure trying to glean something adjacent to fun in this game would be nice. During my delve in the copper mine to fight Errol, I found a Trippy Shroom item. The tooltip says not to eat it, so naturally I want to eat it, but I also figure this is a good poll question.

Should I eat the Trippy Shroom? 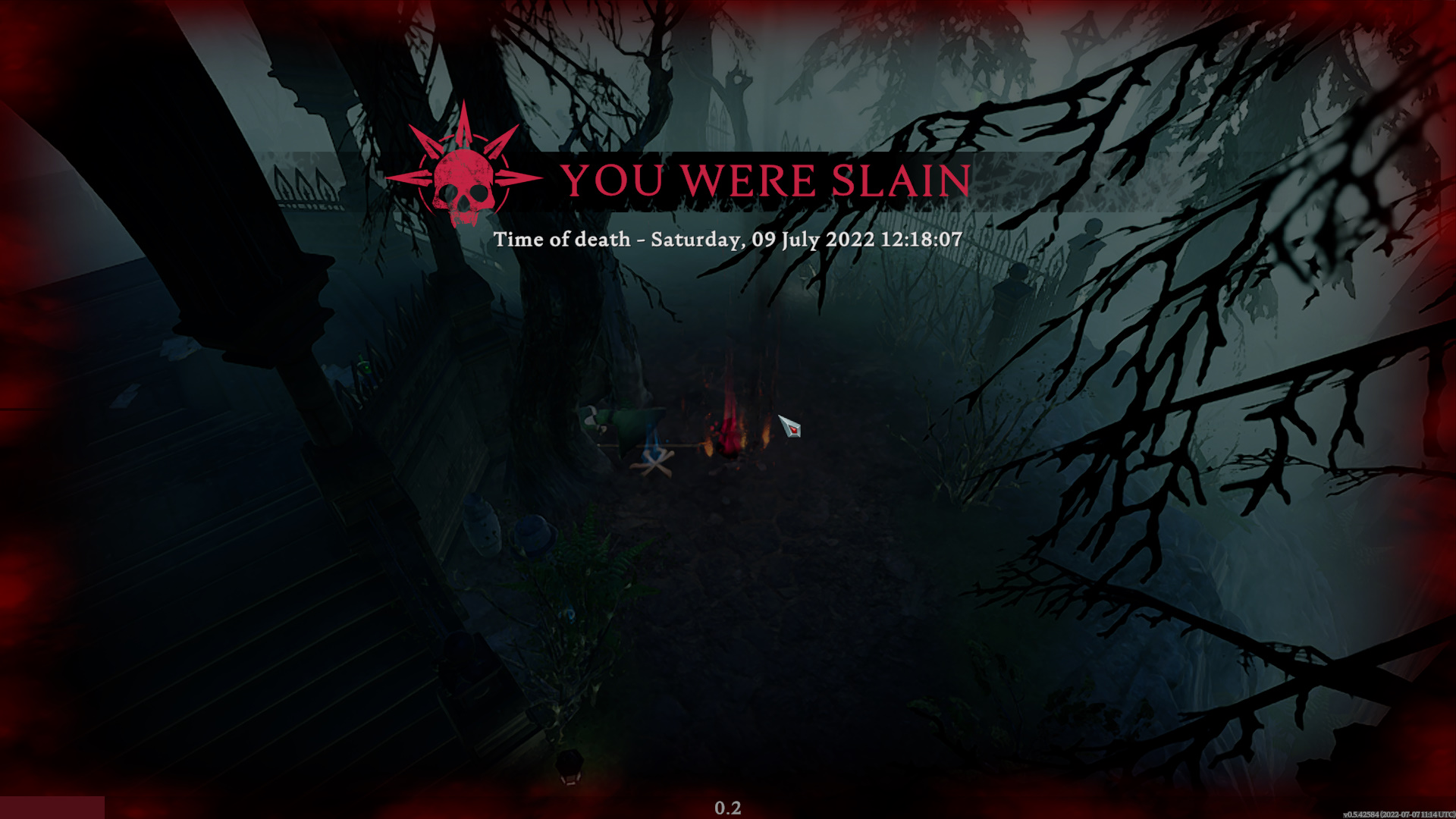 Polls close at 1:00 p.m. this coming Friday, July 15th – y’all know the deal by now. In the meantime, I’m going to step away and cool off for a bit. Maybe some time out of this game will provide some new insight.