As promised, ArenaNet has delivered Guild Wars 2’s roadmap for the rest of the summer today, starting with the revelation that the third episode of the living world season one revival will launch next week on July 19th, free for everyone. “Queen Jennah is preparing to wrap up her gala Jubilee with a momentous speech to her loyal subjects and visitors—but the nefarious villain Scarlet Briar has other plans,” the studio teases.

END_OF_DOCUMENT_TOKEN_TO_BE_REPLACED

The July 19th update will also see improvements to multiple world boss events, including visuals, “to bring them up to our current design standards by adding skill telegraphs and defiance bars, improving encounter mechanics, and rebalancing health pools to accommodate the power level of modern profession builds.” ArenaNet says it aims to ensure “these encounters leave a strong first impression for newer players and continue to be enjoyable for veteran players, so [it’s] given each a bit of love as [it] prepare[s] for the future launch of Guild Wars 2 on Steam.” Yep, Steam’s still happening.

The patch will further introduce another round of changes to raid rewards, with some extraneous currencies essentially being condensed into other currencies and challenge mode raids delivering better bonus chests. And the fractals system’s Mistlock Instability will be revamped “to reduce frustrating difficulty spikes, reward players for taking advantage of positive play opportunities, and increase synergy between instabilities across the board.”

Beyond this update, players can expect the return of Festival of the Four Winds and the next balance update on August 2nd, the 10th anniversary festivities on August 23rd, and episode four of living world season one’s revival on September 13th. 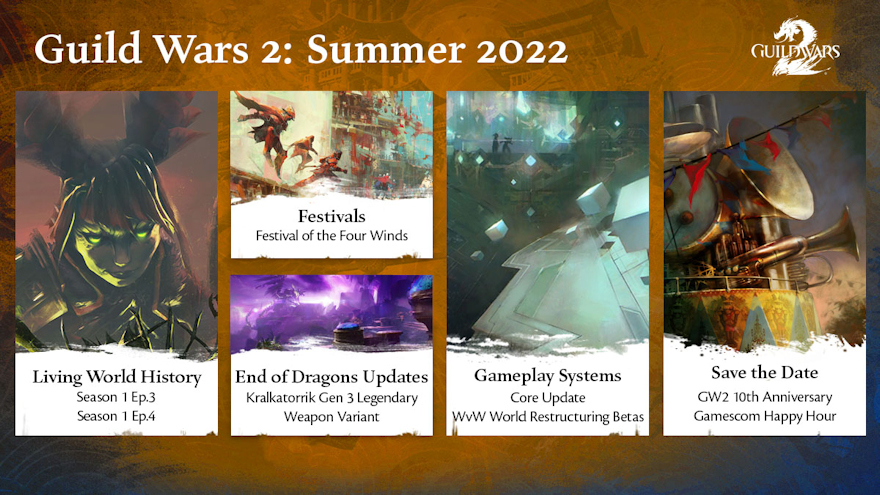