EVE Online is going full science fair mode with the release of a whole suite of fancy graphs and data collected and presented during Fanfest 2022. The presentation is full of player data trivia in visual form, including number of alliances, number of hours a character has been in-game since its creation, a highlight of five characters owned by Fanfest attendees that were created when EVE first launched, and animated graphs that track the cumulative active character logon minutes, in thousands of hours between 2012 and Fanfest 2022, of each character that belonged to an event attendee.

Some of the visualizations are fascinating – and not the kind of data we usually get from MMO companies. For example, here’s the spread of all the characters with over 100 hours in EVE Online, mapped to playtime and character age, with Fanfest attendees singled out in orange. We dare you to try drawing a useful line through this sucker because there’s a really good mix of old and new characters in here. It’s kind of surprising to see how many relative casuals with ancient accounts still show up for Fanfest, isn’t it? 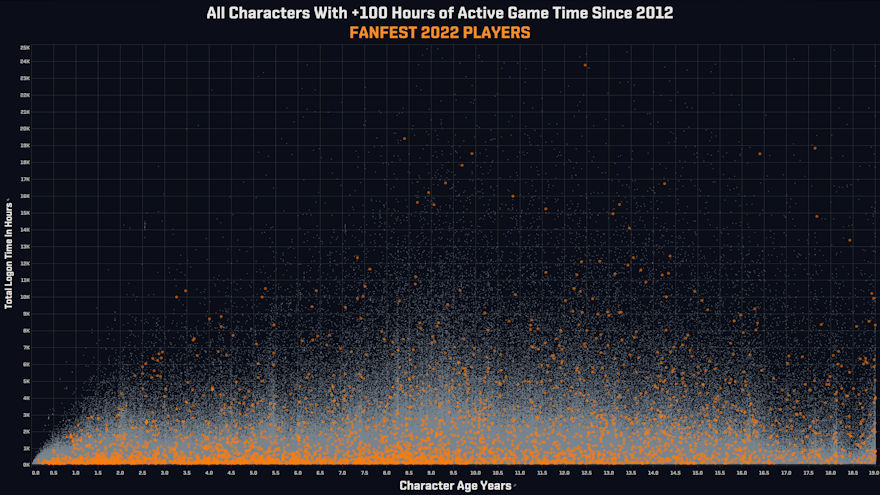 The company then homes in on Fanfest attendees in particular to demonstrate how many characters are attached to each attendee – again, showing a huge spread between casual and hardcore players. “[S]ome have been playing EVE for many years, while others are just starting out,” CCP says. “Most players have been quite active in terms of hours, but the differences are still massive. And some choose to play only on a few or even a single character, while others have put together a small army.”

For those who love to watch data get crunched and visualized, the complete presentation is available to view below.