We’ve known that the August 27th Pokemon Go Go Fest Finale was going to occur since prior to Go Fest proper, but we didn’t have any details beyond hints from multiple regional Go Fests being held after the global event. Fortunately, that’s changed today.

The main event will be the Ultra Beasts, with Xurkitree looking like the main winner and Buzzwole being a very distant second as a Fighting-type, as it receives no Bug fast move. Pheromosa does have high DPS among the bugs, but it’s glassy enough that it may not always even be able to use a charge attack, especially against certain Pyschic types, limiting its value. But don’t worry – there’s a lot more going on during the finale event than Ultra Beast raids.

As with any typical Go Fest, Niantic’s divided the event into stages called Incursions. As always, there’s a free version and a paid version. All participants will have the basic spawns, Special Research (most likely giving out a Great League level Ultra Beast), and a chance to get Shiny Muna from taking pictures of their buddy, along with the ability to buy some new event-themed avatar items.

Paid ticket holders get up to nine free raid passes, halved hatch distance, two avatar items, different snap-shot pokemon (though we assume Muna will still be one of  them), an extra 5,000 XP for completing in-person raids, three times the XP from spinning stops, the ability to change between Shaymin’s Sky and Land formed, a new quest for Sky Forme Shaymin, and some special spawns if you use incense.

Here are the incursions, the times, and a few notes from us on priorities: 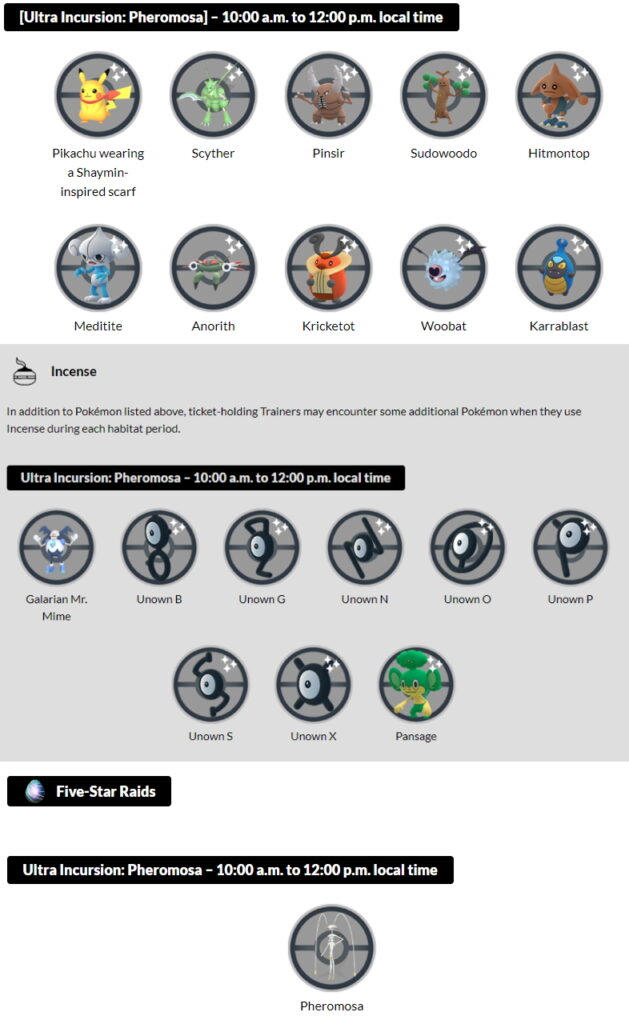 Pheromosa’s hour is the best hour for Mega-catch up. Pinsir’s Mega isn’t out yet but has higher DPS and overall raid value, plus its Flying typing is more useful for gathering extra candy/XP in most situations, as it’s more plentiful than Steel types. That being said, you can also get better Scythers during this time, not only for Mega Scyther but as a future investment for its Hisui evolution, Kleaver, because a move shakeup may make it more useful outside of its Mega form (which you should prioritize). There’s also Meditite, who also gets a future Mega Evolution that’s Fighting and Psychic. Ticket holders also get access to Galarian Mr. Mime, a not-so-great Pokemon in terms of stats or game use, but it’s useful for taunting people at gyms and gaining what is traditionally a regional candy for those of us outside of Europe.

As a side note, the Unowns are the same for all hours, so don’t get too caught up on those. While rare in the wild, Unown does get marched out for a lot of events. Some collectors prize its shiny forms due to their rarity, but otherwise, it’s a useless pokemon.

Mega Beedril or Mega Scizor obviously work well in this hour, but Mega Lopunny can work too if you prefer Hitmon-candy or Meditite Candy and don’t want to Mega a lot, as the bunny is still quite useful during the next hour. 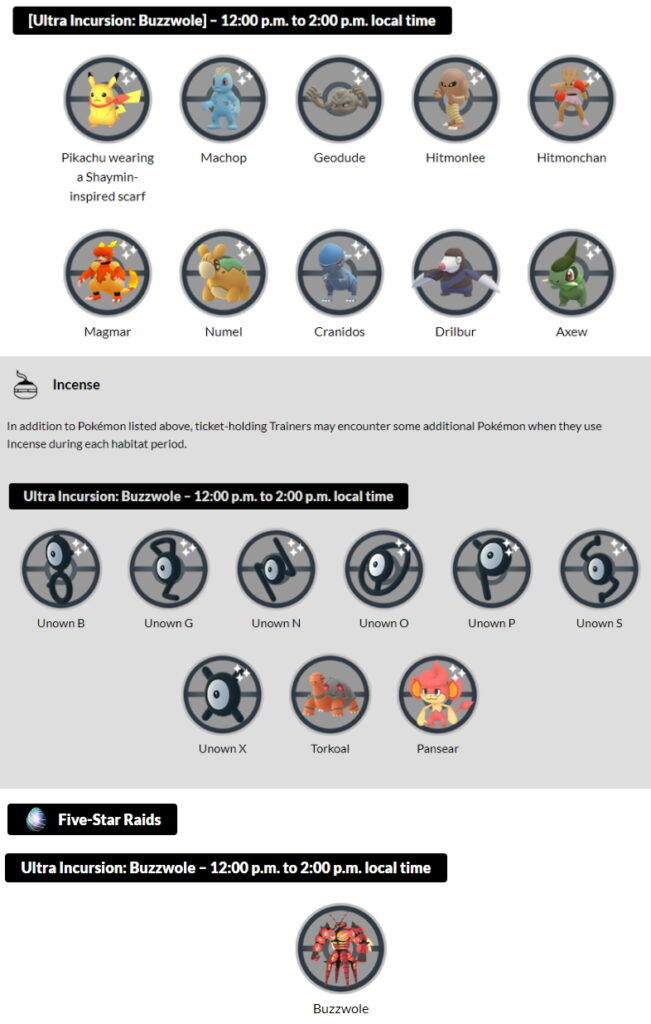 Buzzwole’s incursion is where things start to heat up. The regionals aren’t much to get excited about unless you’ve missed Torkoal or Pansear in the past, but Cranidos’ evolution is still a top pick for Rock, and Machamp is still the go-to gym attacker (even better if you have a Shadow one). Drillbur’s evolution, Excadrill, is quite good as a Ground-type, serviceable as Steel-type, and plenty useful for taking out Rockets. And of course, there’s Axew, a rare dragon that looks awesome but maybe isn’t as useful as some other dragons aside from being a mono-type.

Mega Charizard X could be a useful Mega here because it gives you extra Axew candy, regional candies for Pansear and Torkoal, and Magmar and Numel candy, the latter of which gets a Mega that probably won’t be useful in combat at all but gives extra candy and XP to two-thirds of Sunny Weather’s increased spawns, so some people may find motivation in that.

However, if you’re a Buzzwole fan and especially want to build one in PvP where it’ll shine, use continue using a Bug Mega or consider Mega Lopunny, as it still gives bonus candies to both of these raid options plus Machop candy (if you don’t have enough) and the Hitmon-candy, which is shared by three much-loved pokemon of dubious utility. It may also be useful for later… 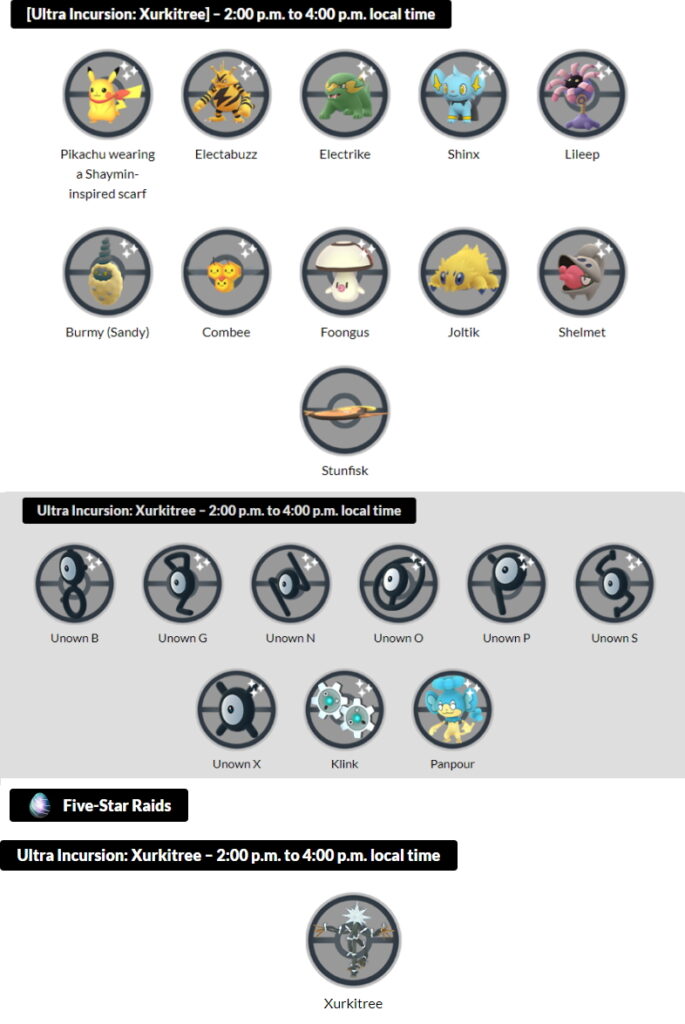 Xurkitree’s incursion isn’t going to be the best use of that Mega Lopunny. That’ll come later. But Xurkitree time means more Stunfisk candy (which can be used on either version), Electabuzz and Shinx candy (especially for those who have their Shadow varieties, as they’re top DPS picks), and Combee, which only recently got its shiny form. Note the above picture is the female form, the only one that evolves. If Combee’s missing that dark orange triangle, it’s male and unable to evolve.

Mega options here are basically Mega Ampharos or Mega Manectric, and I’d mostly advise against the latter due to mono-typing. You probably won’t see any dragons during this hour, but if somehow a wild one spawns, at least you’ll get extra candy and XP from it. Either way, Xurkitree’s Electric hours are a bit dull, but it is the most useful raid option of the day, it’s the newest useful Ultra beast, and it has several high-end ‘mon to invest in, so if you’ve got Mega Energy to spare, Mega one of your Electrics.

If you’re low on incense and in a high-spawn area, this may be the time to hold back. The additional spawns during this hour are quite weak, and unless you’re a shiny collector, neither of the non-Unowns is useful. 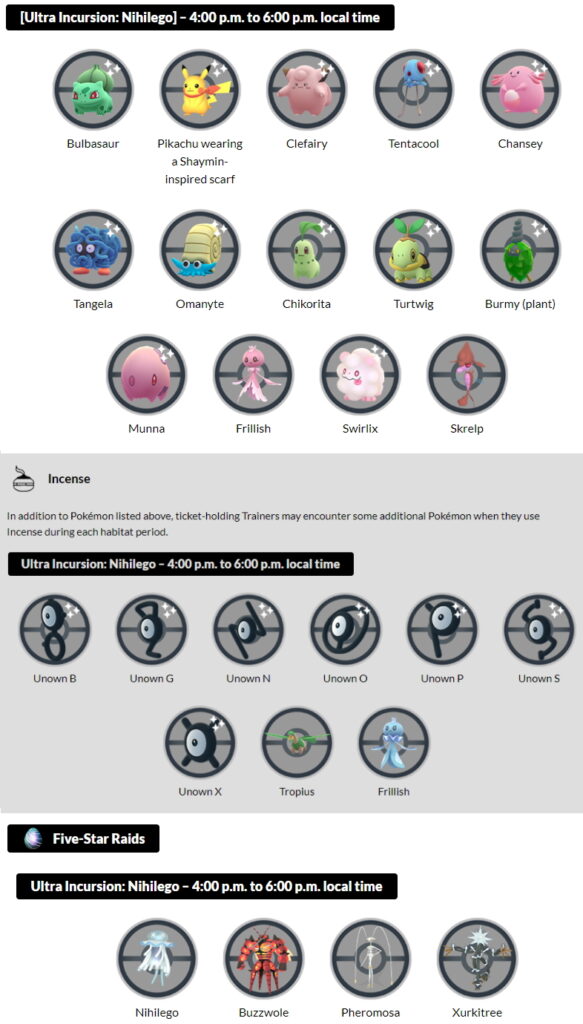 And at the end is Nihilego’s incursion to wrap things up. Chansey spawns are great because it’s still the gym defender, both evolved into Blissey and as the base Chansey. Both Frillish genders make an appearance, and it’s not only a great pokemon for PvP in Great and Ultra Leagues but a decent gym defender too. Speaking of which, Skrelp, another pokemon this hour, is an interesting defender, as it resists Fighting types and all of Machamp’s major charge attacks unless you find the rare Heavy Slam User. There’s also Tropius, which isn’t a good gym defender thanks to quad Ice weakness but remains one of the more useful regionals in PvP.

Because of the round-up type nature of the raids, I’d recommend choosing this incursion if you can only make it to part of the event. Mega Lopunny gives bonus XL candy to half of the raid ‘mon plus Chansey, which is quite good. Mega Beedril, though, hits all the Ultra Beasts except Xurkitree, plus Skrelp and Bulbasaur (plus Tentacrool, to a lesser extent). I know someone will want to suggest Mega Ampharos for Xurkitree, but remember that Skrelp itself is Poison and Water, not Dragon yet, so Amphy will give no bonus candy there.

Xurkitree and Nihilego are probably the best targets for raiders during this time. Buzzwole is probably best for PvP fans, as raiders get more mileage out of other Fighters and casuals can use the event to build up the much more accessible Machamp. Pheromosa, again, is mostly just a Bug glass canon – maybe not the best investment.

In the same order, have a team of Ground pokemon and a team of Flying pokemon set up before the event. Xurkitree is weak to Ground while Nihilego is quad weak to it, and both the Bug Beasts are also part Fighting, make them both quad weak to Flying.

As always, things could change, so check back to see if any cowboys decide to come ’round to the finale event.