I’m going to be honest, the initial worry when I saw what won last week’s Choose My Adventure poll was that I had already found most of what I could find in Temtem. After all, I was reasonably sure that I was being thorough in the run-up to the first major boss fight of the game, so I kind of figured I was going to have to get through at least some of the main story to see if maybe I could open up new lands. Turns out that was the right move, since moving through the story landed me a surfboard and opened up a lot of the game’s map.

I’m getting slightly ahead of myself, though. First, I thought to do some due diligence and run around the area I last left off on just to be sure that I hadn’t missed somewhere or something. A few circuits through the cavern leading to the boss and the nearby tall grass seemed to confirm my suspicions, and trekking back to where the main narrative was aiming me with detours through more tall grass had effectively proven me right: Unless I was wildly unlucky with the RNG of encounters, I was seeing nothing new.

This led me back to Bircal de Mar and to the first dojo – a gym encounter, by Pokemon standards – which had similarly Pokemon-esque trappings to it, including navigating a goofy sort of semi-maze that required finding the path with bursts of wind and gushes of water, being stopped by some required fights along the way. For a while I was kind of making my way along with the critters I wanted to use, but the elemental requirements of the encounters pretty much hard-locked me into whipping out more “correct” monsters. 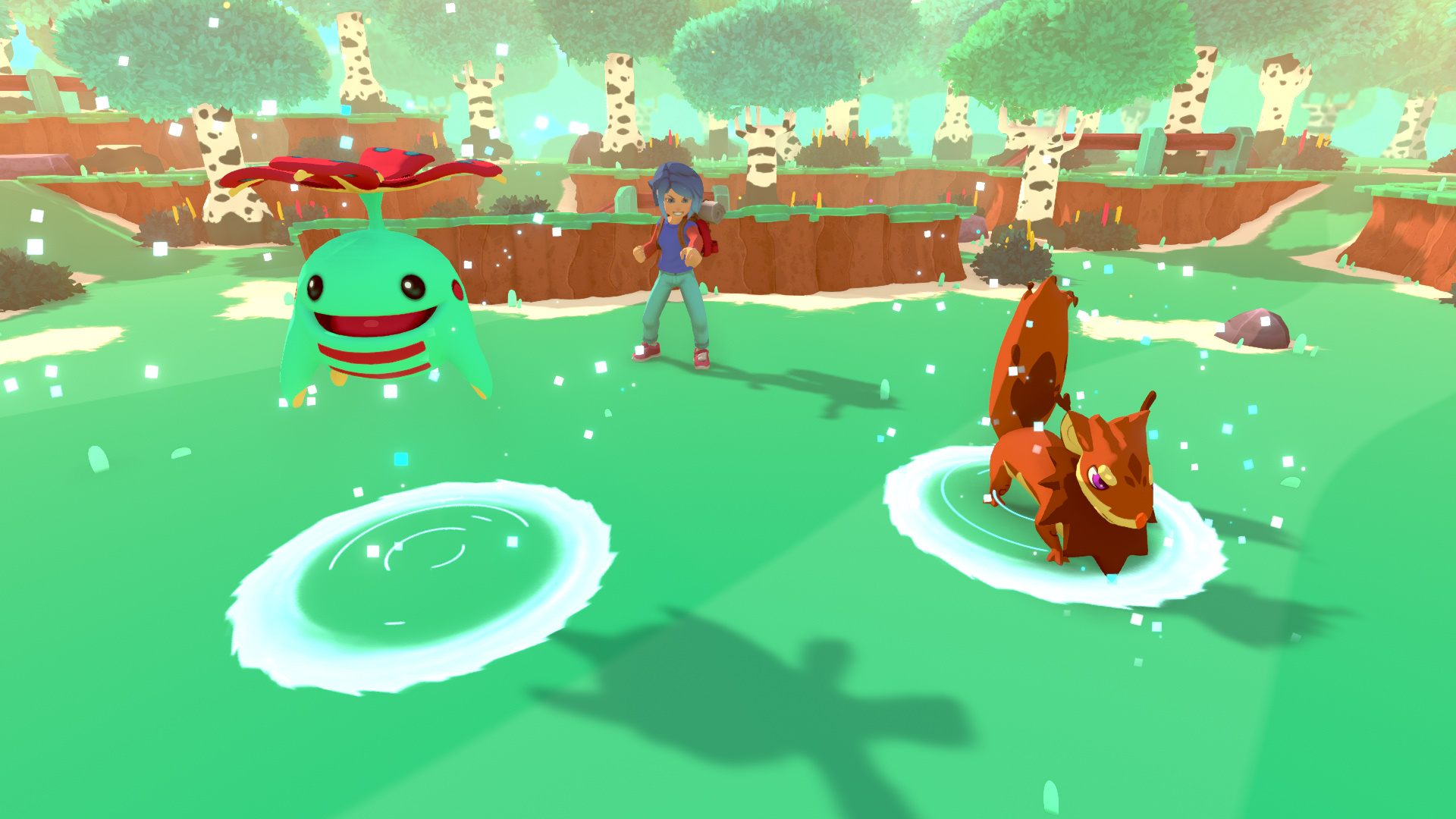 I think this is where I realized that the formula of regular Pokemon games – and by extension Temtem, since it follows the formula nearly to a T – is that there’s not a whole lot of room for creativity. I was in a dojo with earth and water creatures, and I had to use the counters to those elements and screw me for thinking otherwise. It’s annoyingly restrictive, though I’m sure that restriction isn’t new to regular players of this kind of game. Granted, it’s not new to me either, but I also only really knew about that sort of framework from second-hand accounts; experiencing it firsthand turns out to be an entirely different and annoying beast.

Still, it was just as well that I did indeed get to the final fight in the dojo, since beating Sophia the dojo master got me a surfboard. This, in turn, opened up a great deal of the game’s map from Brical de Mar and areas eastward and southward. There is, quite frankly, a surprising amount of ground (water?) to cover after this point, with new locations and sidequests to find along the way.

Of course, this also meant that I had opened myself up to new Tems to catch. As one would probably suspect, moving around on the water made more water-aspected critters arrive to me, and suddenly I was reinvigorated with the hunt. 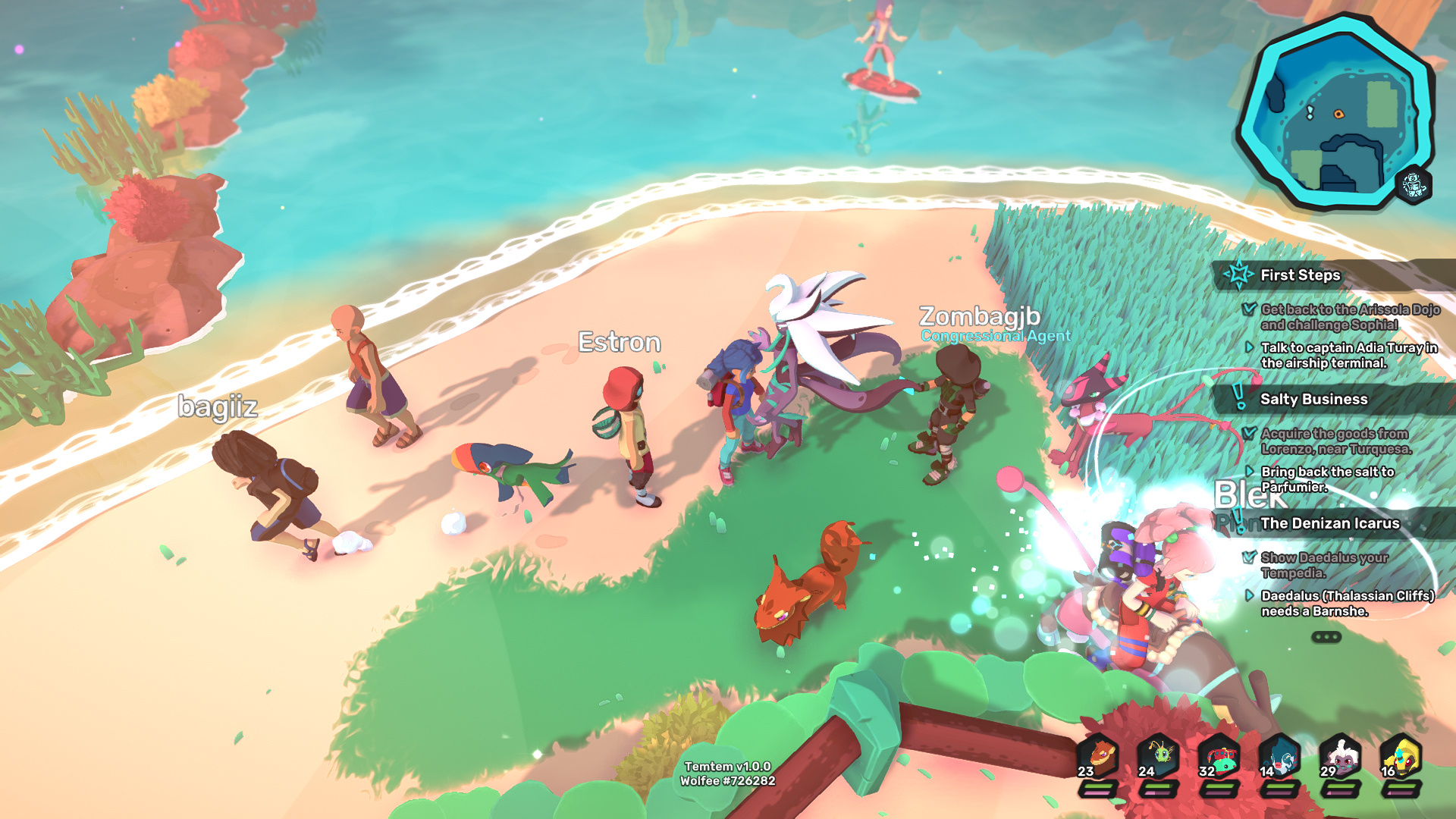 This is, honestly, where most of my enjoyment from Temtem is derived. The fights against other trainers and the overall plot such as it is do not engage me, but being allowed to run around the world, opening up new areas and finding new creatures to snatch in order to explore how they feel and add more entries to my Tempedia is the biggest draw for me.

So naturally, I ended up hoovering a bunch of fishy friend Tems and started working my way through the process of granting them levels and seeing what tricks and strategies they have to offer once more. I didn’t get particularly far in this portion of my time with Temtem, mostly because I was being distracted with all the little side missions that I was now able to either complete or pick up now that the surfboard was mine.

This little bout of exploration that I was granted also opened me up to a few locations that I wasn’t expecting. For instance, I managed to come across an aquarium location that I’m pretty sure is meant for higher level players owing to the fight that I had with a random trainer in there. I was able to just get away with my life there, but only barely. When last I left off, I found myself in a cavern that I’m not sure I’m meant to be inside just yet to the point that I had to use a smoke bomb to escape as I was draining my healing items to keep my critters alive. 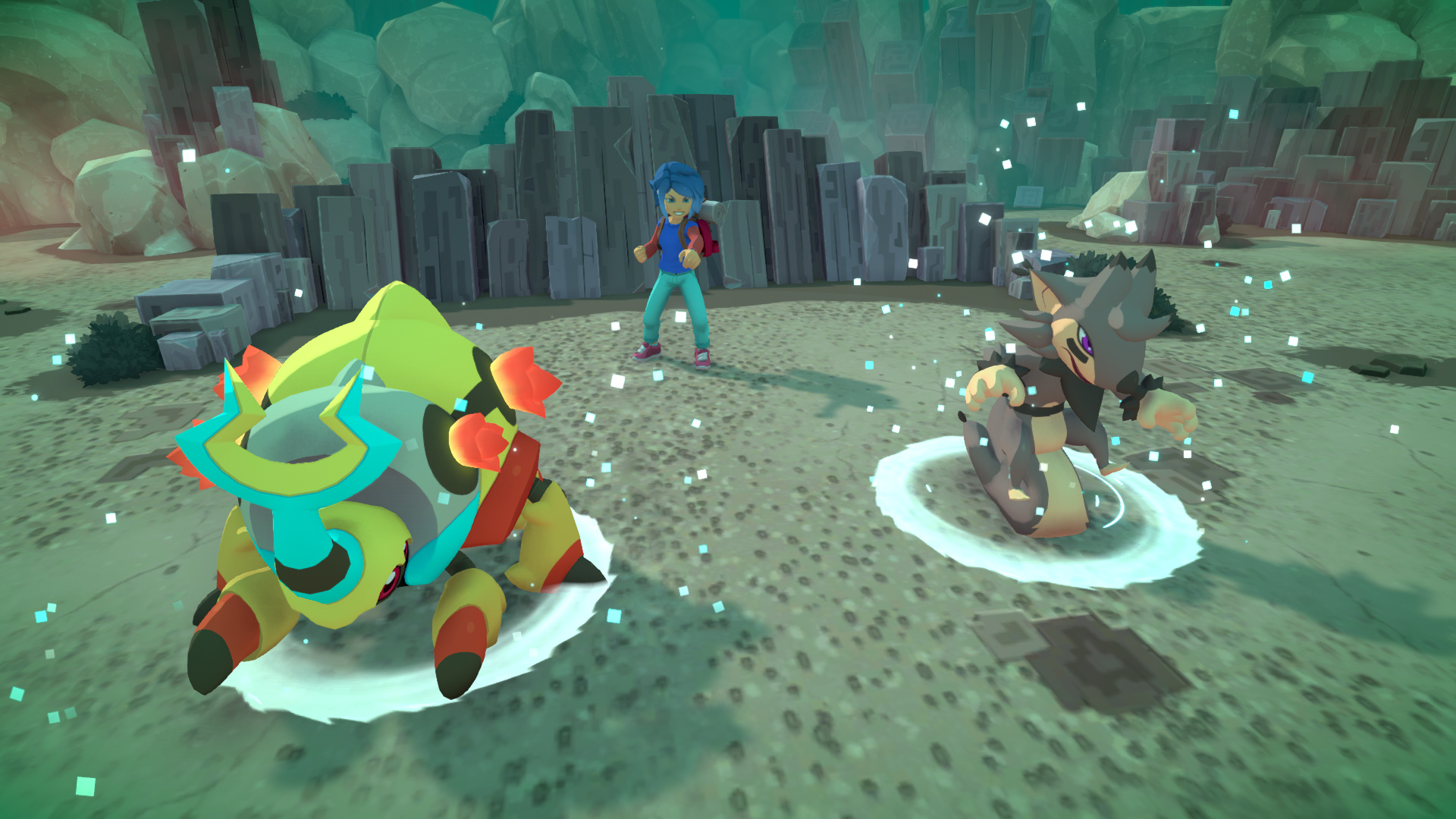 This does rather neatly move us into the final poll I’ve got in line for this game. While it’s not a perfect sandbox, I have gotten to a point where I think that I’m able to tumble around a little more freely than I’ve been able to before this point, so I’d like to take advantage. Now I should point out that all of the things in this poll are likely going to be done at the same time, but I would like to know a little more about what should be my primary focus. Thus, the first poll:

What should be the focus for the final leg of our journey?

The next poll will be about next month’s game, and as is frequently the case, I’ve got something of a theme lined up this time around: the CMA Four Winds edition. I’d like to get a look at some MMOs from Korea or China as a primary focus simply because there’s an unexplained urge to, and what better vehicle to satisfy those random cravings than with a CMA column? I’ll grant that these may not be the “big” choices of games to go through next, but I hope that you’ll all bear with me as I play at least one choice. Perhaps multiple, depending on how things play out.

What should be our next game? Choose My Four Winds Adventure! 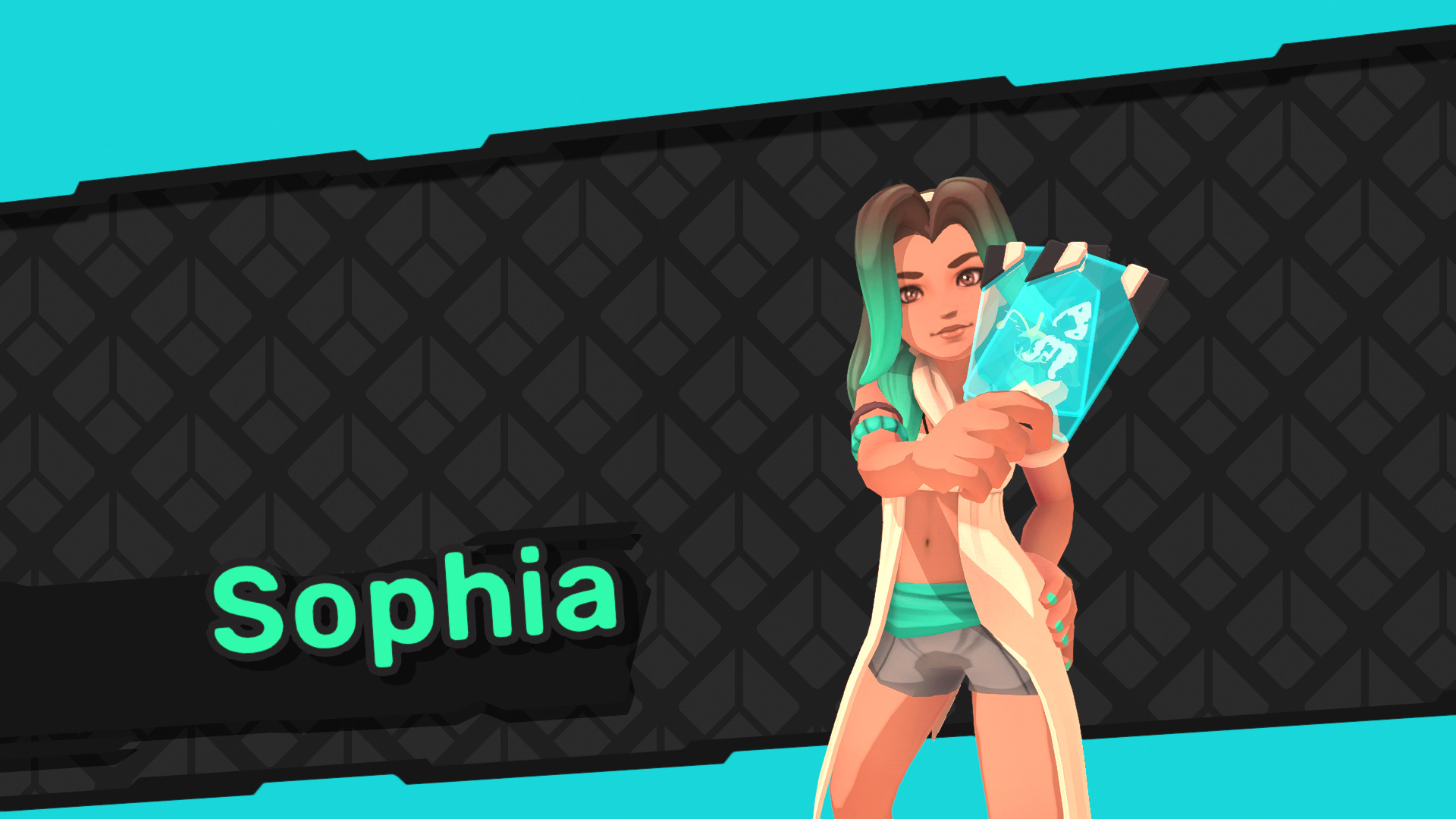 As usual, polling is set to wrap up at 1:00 p.m. EDT this coming Friday, September 23rd. I think I’ve had enough time to collect my overall impressions about what the game feels like starting from the top, but I think a bit more time doing the activities above would do me good.