Earlier this week we reported on a major issue affecting Shroud of the Avatar and its latest release, which featured a bug tied to the game’s housing lots that made the game so “borked” it had to stay offline for days on end. We’ve circled back to the story to offer up a couple of important updates, but let’s get the big one out of the way first: The live server is back online, but only for internal testing.

Recovery progress has been once again chronicled in the forums, with the first post of an update thread assuring players “the game is not going away” before offering a detailed explanation of what has happened, affirmation that there will be a postmortem livestream, and some “special stuff” for fans.

As of right now, players can enter the QA server for a series of “sanity tests,” but this isn’t for an R106 build; it’s for a build from August 24th. “We have done everything feasible to avoid going this far back, but at this time this appears to be the safest thing to do” the announcement reads. “Once tested for sanity (with your help) we will put this database on the Live server and restore everyone’s earned XP and gold as well as address other losses.”

In spite of this assurance, some players on the official Discord are not pleased, particularly in the general chat channel as players bemoan lost effort, resources, and time, while others seem to be shrugging their shoulders. There’s even at least one player offering to help with material recovery should this rollback indeed go live. 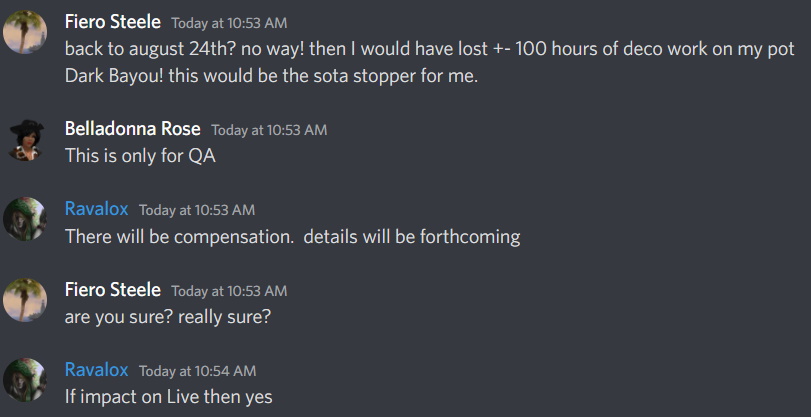