The sorry saga of Chronicles of Elyria has a new chapter today, as Soulbound Studios’ Jeromy “Caspian” Walsh has released a Q3 update, and it’s… well, not a great day for backers of the game, as apparently the ongoing class-action lawsuit against Soulbound has been dismissed in court. Backers had originally filed the lawsuit in an attempt to reclaim the $14M+ in funding they’d put in and hold studio leadership accountable following Elyria’s abrupt cancelation and even more abrupt supposed restart back in 2020.

Walsh calls the lawsuit’s dismissal a “victory to both all those who have, or will use crowdfunding as a source of seed funding for innovative projects, as well as (and most importantly) the backers of Chronicles of Elyria,” though it’s hard to see how, as the lack of corporate and judicial accountability for crowdfunded products continues to undermine Kickstarter’s credibility with would-be backers, and of course, the backers here still have neither their money nor the game they paid for.

Characterizing Soulbound’s stormy history as phases of “the hero’s journey” through which it is “ascending,” Walsh explains that the studio is now $500,000 in debt and not generating revenue, so he’s been self-funding development for the last year by working outside the game industry; he claims this outside work, along with the lawsuit, has hindered all engineering efforts on spinoff game Kingdoms of Elyria: “From an Engineering standpoint, the game is in the same place now as it was in July.” Instead, what little work was done was essentially an examination of “design elements” such as the UI, character sim, contracts, RPG systems. In Q4, he says, the devs “will continue to critically examine, test, and refactor more of the game’s mechanical design.”

According to players in the Elyria class-action lawsuit Discord, it’s unclear whether an appeal is being filed. It does look as if arbitration in the separate case against Elyria’s payment processor Xsolla is proceeding.

Source: Falls v. Soulbound Studios, Official site, Discord. Cheers, Felix.
Chronicles of Elyria stunned MMO gamers in 2020 by announcing it was out of money, had laid off the devs, had closed Soulbound Studio, and had ended development on the game. Though CEO Jeromy Walsh later retracted much of that and said the game was still in production with volunteer staff, the gamers who’d backed it for $14M+ in crowdfunds pressed on with a lawsuit that was dismissed in 2022. Since 2021, the revivified but ensmallened team has focused on spinoff game Kingdoms of Elyria. 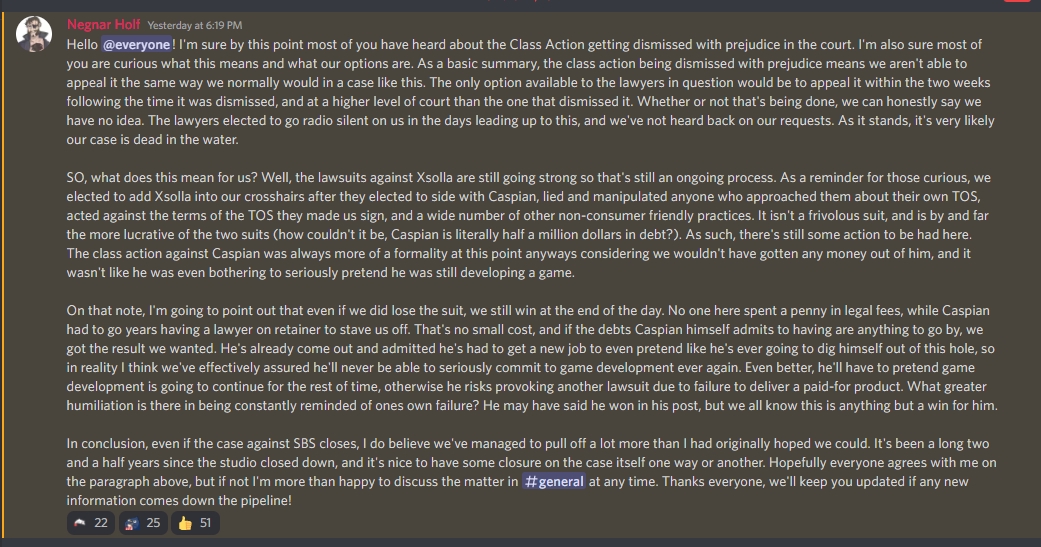