Even at the max level in Lost Ark, I find that I’m still kind of playing alone. A little bit. Though I suppose I shouldn’t be too surprised. Still, it’s hard not to feel let down regardless of the fact.

Before I start to process those feelings, let’s get into the second poll’s results, which saw me pick up my controller as the primary method for getting into combat. As much as I wanted to do a little bit of trial by fire, I elected to just slowly ramp myself into things, entering an open map area to get used to where my buttons were. After a few quick fights with foes that were much weaker, I felt like I had a pretty all right grasp of things.

The improvement was almost immediate, with a better sense of where my character was and how to change direction since I could focus on the character on-screen and not on both that and my mouse cursor. I could keep my eyes on the action happening around me, react far more efficiently, and get into position a bit better overall. This definitely feels like the way to go when it comes to playing this game, or ARPGs in general, but then that’s a personal preference; most people seem to think using a gamepad is tantamount to sacrilege against the sub-genre entire. 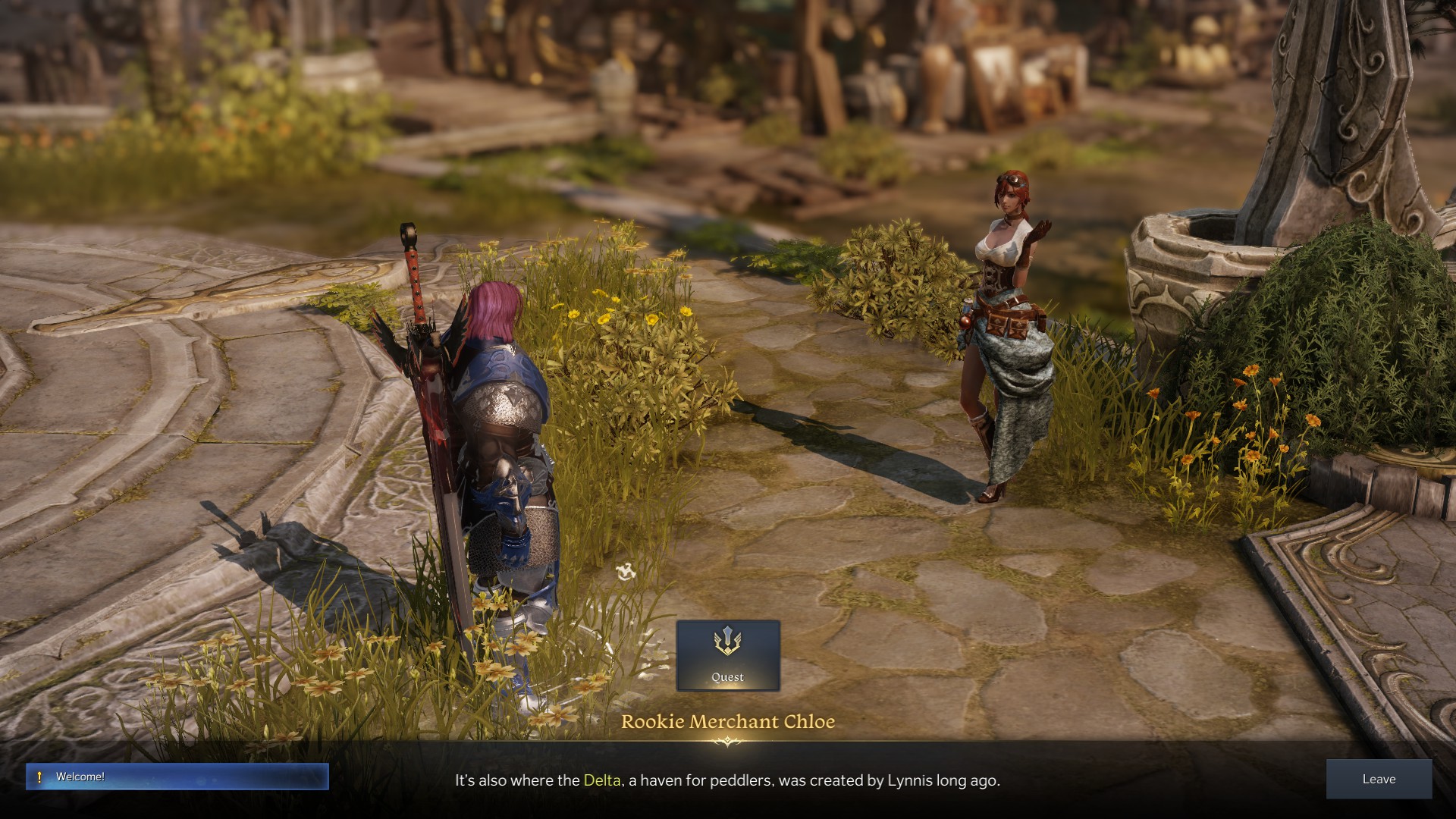 That said, I do have to admit that perhaps this level of comfort has more to do with being a melee class than a ranged one. Since the first poll said to take up the Paladin alt, I was effectively putting aside my main spellslinging character and the ranged machine gunning alt for something that was all about running into enemy faces. I did have one ranged ability that I had set up to auto-aim, so I think working at distance could still pan out, but I’ll probably try that “off-camera,” so to speak. My Paladin and I had work to do.

Once I got my hands around how to move and attack, I decided to take up a couple of the Una’s Tasks side activities in order to try and get into fights of slightly harder scale – considering the enemies I was starting off against were blowing into giblets with a couple of swings of my sword, I had figured some of these missions would pit me against things that had slightly meatier HP pools. I was right for the most part, as the areas I was aimed toward featured some slightly beefier enemies to face, but things were still getting blown up with impunity.

It was time to stop stalling and kick myself into the deep end of Lost Ark’s endgame – or at least the deepest end my item level would allow. At item level 340, this meant a couple of chaos dungeons to see if my boy could stand up to hordes of foes with other people. And that’s when I started running into some problems. 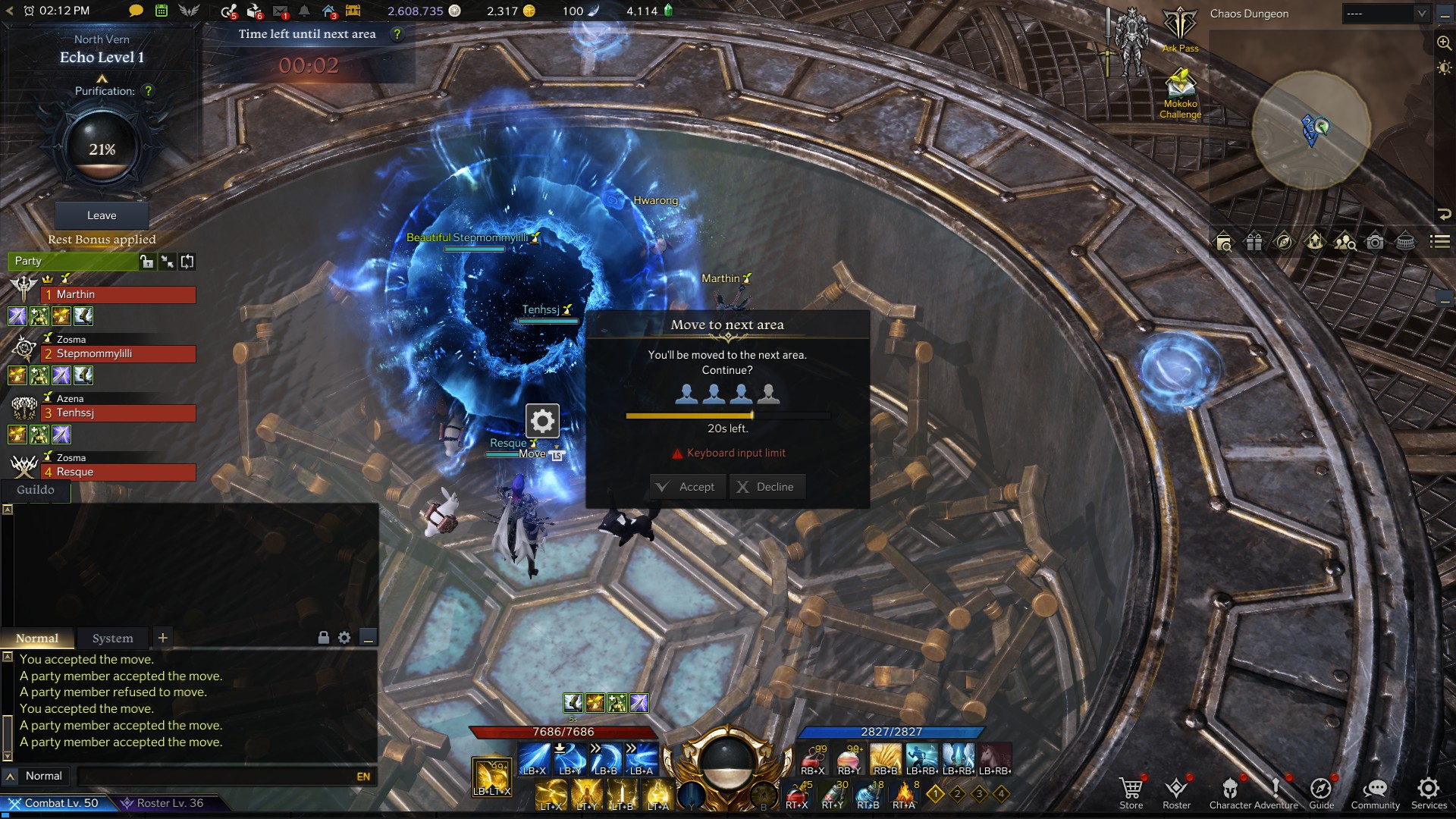 First off, the queue times at the low-tier of endgame progression are pretty awful. I had tried to get into some chaos dungeons with others a couple of times, and each one saw me idle for about 20-25 minutes apiece – about the same length of time it takes for the usual DPS role queue I’ve felt in other MMORPGs. No big deal, as I could just watch a couple of videos, but it was still kind of disheartening to feel like my worries about being left behind were confirmed.

The couple of times I did get to play with others I acquitted myself reasonably well, though one of the times we failed the chaos dungeon because I suspect one of our teammates was a bot – once the rift to move to the next level of the encounter opened, all they did was dart around a few times trying to find enemies to fight, then just stood there as the timer ticked away to zero. Even at the endgame phase of Lost Ark, botting is still a problem. The time I was with other actual humans, the chaos dungeon was just as satisfying as I remember. It’s hard to not get drawn in to an activity that literally runs no deeper than charging around a map to turn enemies into ketchup and hoovering up goodies.

After some rewards and a bit of honing my gear to get to item level 420, I moved on to the second step in the mountain climb that is Lost Ark’s endgame progression: the guardian raid. This fight definitely put my skills more to the test and showed that my comfort level with the controller wasn’t quite up to snuff, especially with regards to paying attention to what abilities were and were not on cooldown, but at the same time the intensity of the battle forced me to focus up as I tried to better time my ability use and remembered how the potions buttons worked. Regrettably, I was responsible for the one death in the run, but we were victorious, and I even managed to get a little accolade as the party healer. 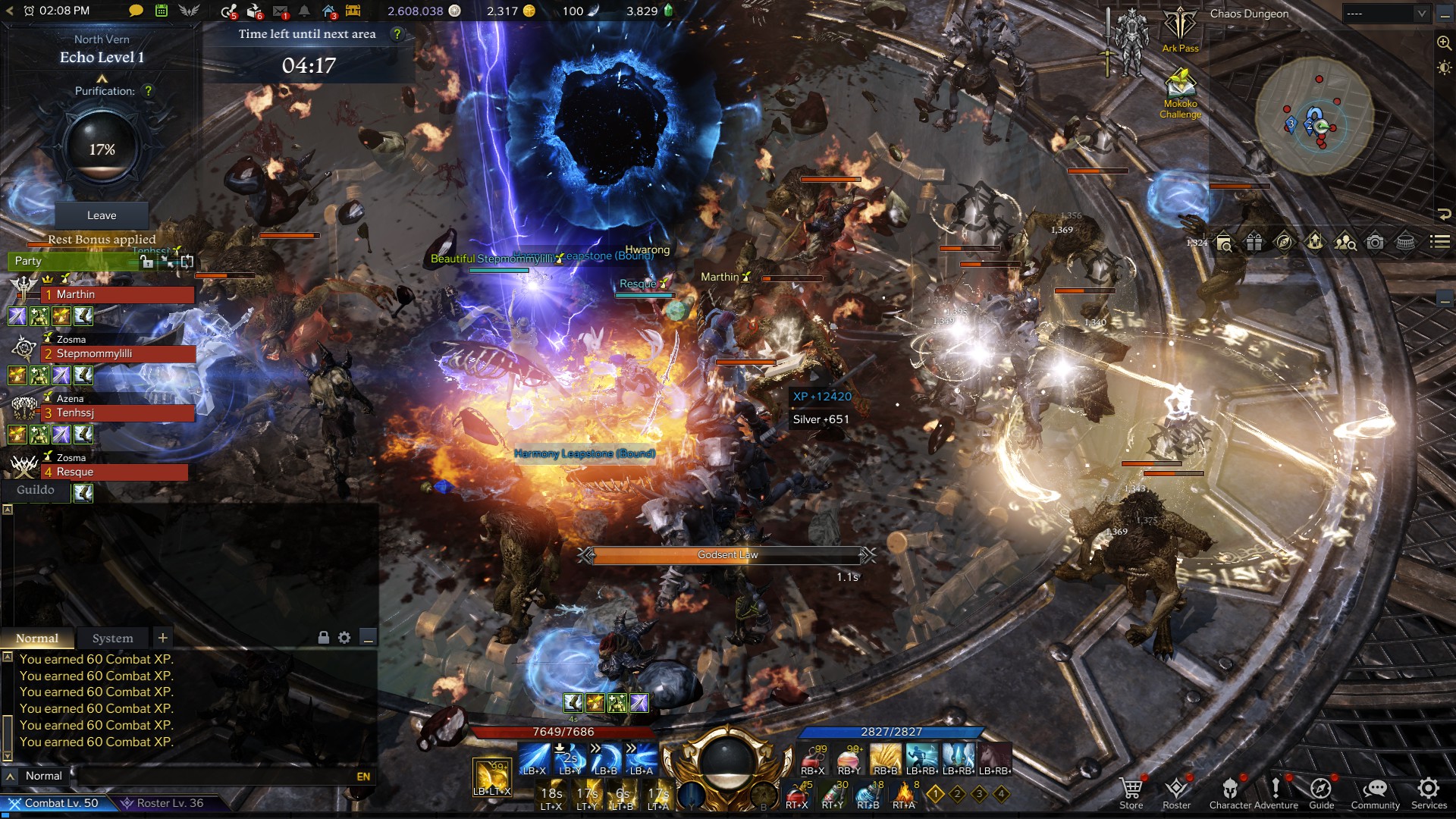 As nice as this felt and as good as the rewards got for me here, I still was left sitting idle for longer than I had wanted, waiting for matchmaking to push forward. It didn’t seem like I was waiting quite as long as I was for the chaos dungeon queue to pop, but it still was quite some time. And that kind of makes sense, when I think about it.

Lost Ark has its playerbase now, and that playerbase doesn’t really have any incentive whatsoever to move down the tiers of endgame instances or raids anymore. There doesn’t seem to be many new players in the game – ones that are actually controlled by humans, anyway – and Amazon Games’ answer to the problem has primarily been to hand out boost items or host boost events or basically do anything other than make it rewarding for higher item level players to move down to mingle among the riffraff. It would seem that this ship has sailed. So I’ll move on and away from the docks and do something else.

To that point, we’ve got the next month’s game to sort out, and once again I’m going to be theming this week’s poll choices. I’ve decided to take inspiration from one of Justin’s recent Perfect 10 listicles and call this week’s poll choice the Quirky MMO Selection. These games will probably be only played a week at a time, but we’ll see how that shakes out.

What game should we play next? Choose My Quirky Adventure! 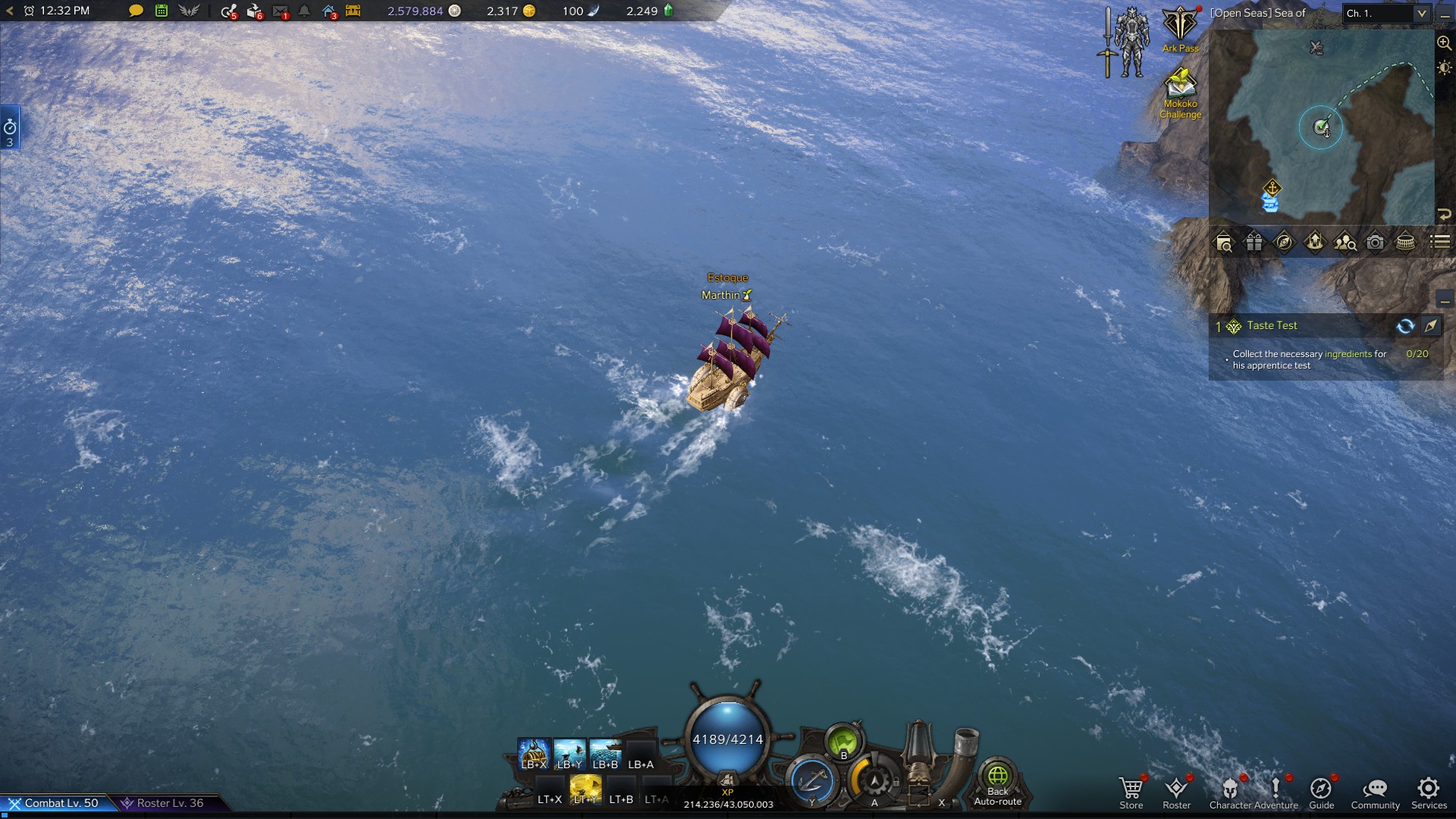 As usual, polling will wrap up at 1:00 p.m. EDT on Friday, October 28th. In the meantime, I suddenly find myself with some hard drive space available to me.