I don’t envy any development team that wants to make something that’s “nostalgic.” Making a game that hearkens back to predecessors or a time in gaming history is very clearly a challenging line to toe – any step in one way or the other can make your title either too much of a nuisance or make those nostalgic systems superfluous. And to be fair, there are games that can manage this balance right – the recent side-scrolling beat-em-up Teenage Mutant Ninja Turtles: Shredder’s Revenge is one example that leaps to mind. In the case of Genfanad, however, I’m sad to report that, during my brief time in the game, the pendulum swings too much in the “nostalgia as a weapon” side of the scale.

Before I go on, this incidentally feels like a good time to bring up the general point of this column and further bookend by stating that I’m not really trying to “review” Genfanad as a whole. That’s not what we do here. In fact, some retrospection has kind of shown me that a bit of my frustration is navigable (sort of). Regardless, I’ve not had a particularly great time in the opening portions here, and I’m sharing that experience. Also, this game is still making updates as all MMORPGs can.

With all of this said, that really doesn’t absolve Genfanad from the larger crime of annoying design and pinning it with the nostalgic button. 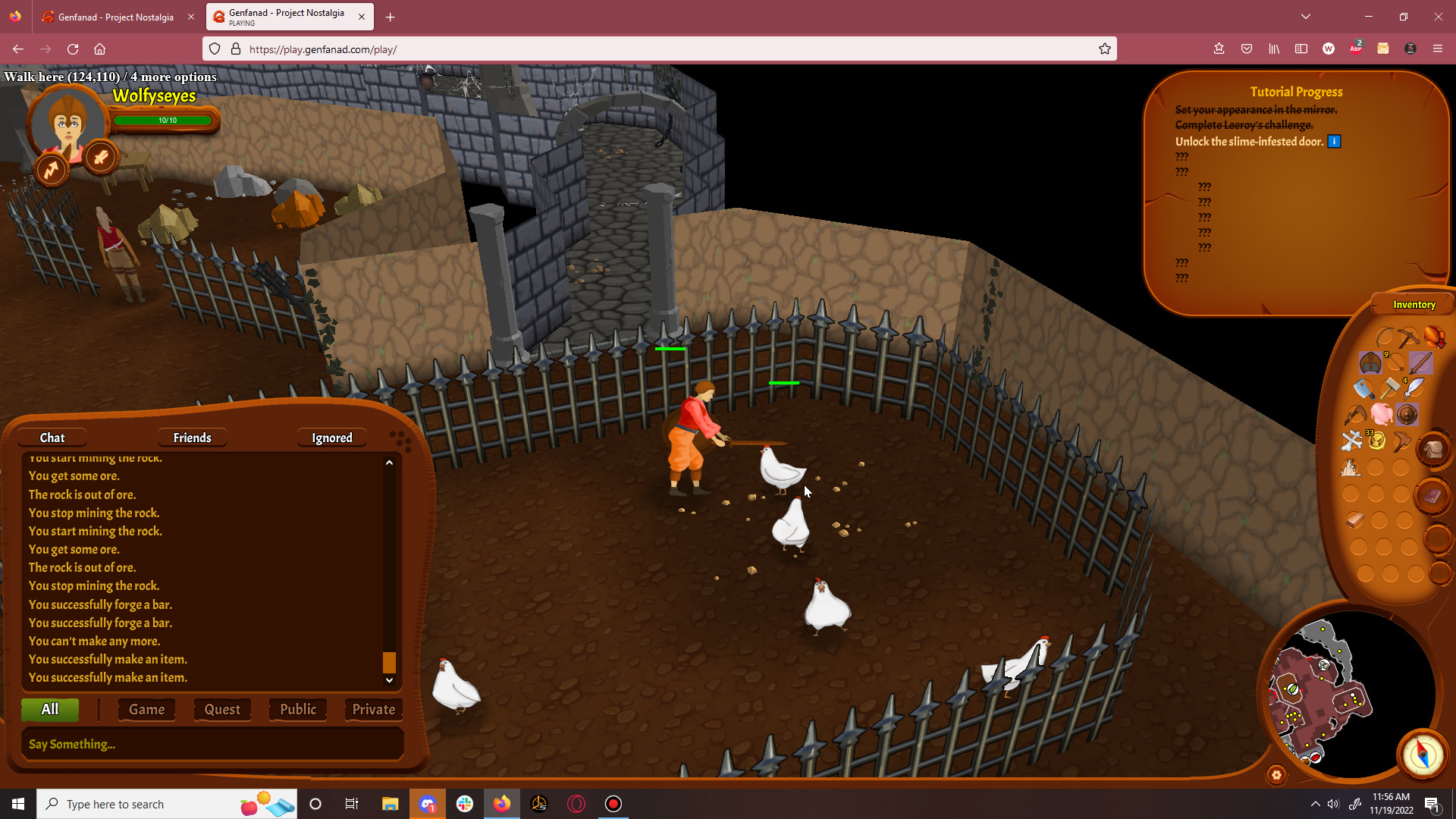 This game is browser-based, so I was definitely tempering my expectations in terms of visual fidelity and gameplay refinement, which is good because this game is extremely boxy and angular, while characters appear to be 2-D sprites. Not a dealbreaker, nor a big hampering of the actual gameplay experience. However, there was the first huge red flag that came to my mind: 100% click-to-move controls. I’m talking full-on Sierra adventure game-like clicking. Everything is clicking, from movement to UI.

To further reference ye old point-and-click games, I know sometimes you had to right-click items, highlight it for use, and then click on something else to interact with it, which I’m not sure is a skill that many gamers remember nowadays. Hell, I’m surprised I remembered it. I guess all those years of PC gaming in the ’90s and through the 2000s taught me well.

Laborious and frustrating as click-to-everything ended up being, I pushed through and followed through the tutorial. Here is where I can definitely give high marks to Genfanad as it frames the whole starter experience as a corporate-run factory-like setup that mills out adventurers for profit, cruelty, or both. Interspersed with the humor that was trying extremely hard to be referential, I was guided on how to get into fights, take up several gathering and crafting professions, and exposed to a little bit of story along the way. 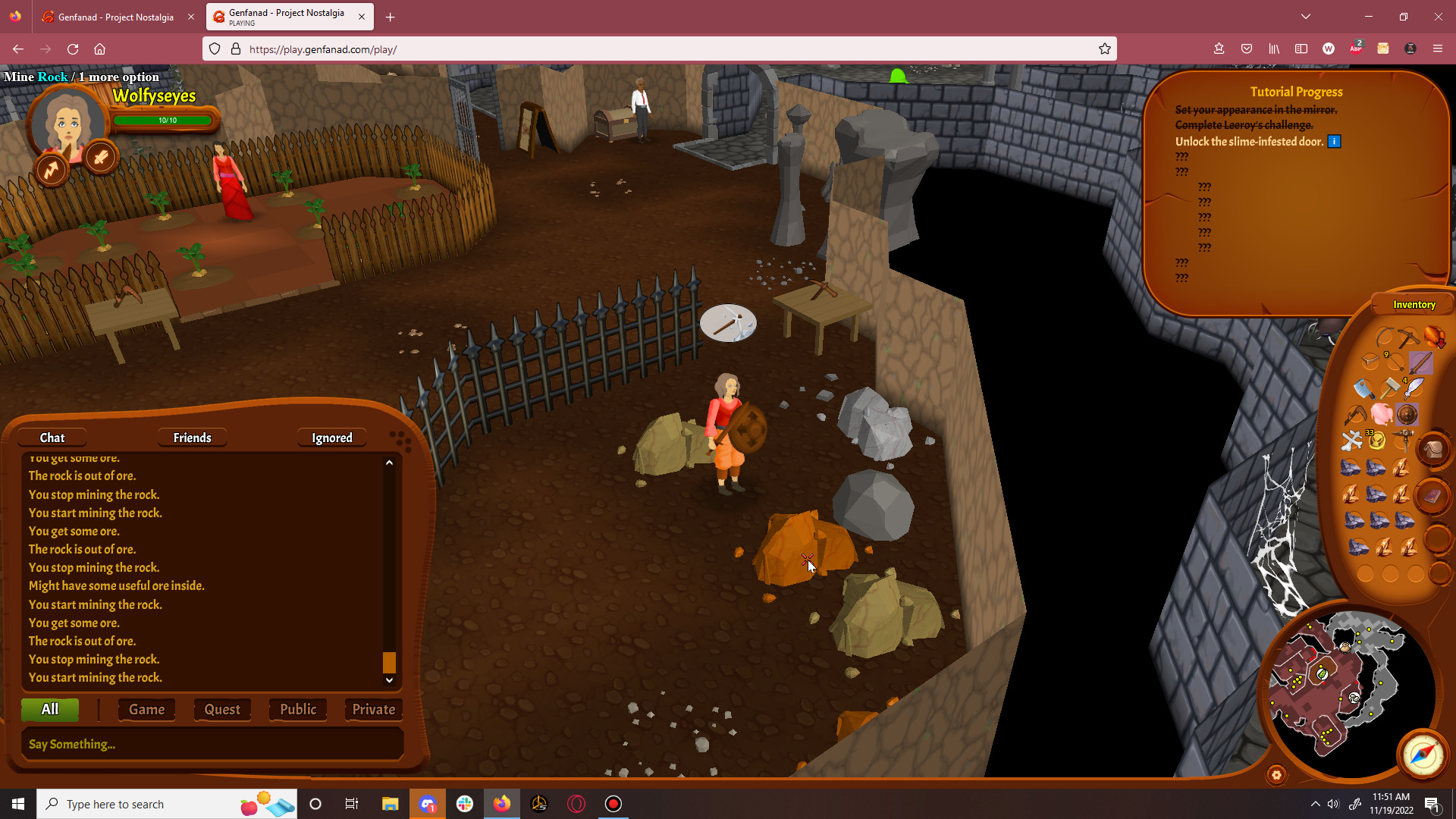 This is also where the nostalgic gameplay beats of Genfanad both rankled and delighted. As in its contemporaries, doing activities like fighting, mining, smithing, or cooking filled bars for each specific skill, which in turn increases the ability to perform those tasks well and presumably opens up more recipes and items. However, it’s all powered by UI futzing in terms of crafting and background dice rolls in combat.

Fighting was a matter of clicking on an enemy, watching my character feebly swing her sword, and hoping the damage and defense rolls went my way, helped along by performing the task of combat and creating gear. Meanwhile, the creation of equipment required me to feed raw materials into a UI in the hopes that combinations of mats would yield things I could make. This is how melee and ranged combat works, by the way; there’s magic too, but that’s reagent-based and ain’t nobody got time for that.

As far as I could tell, there was no recipe book to save this information. Granted, I didn’t need one at this early stage, but I suspect that gets harder to do in the later game assuming there’s no way to chart materials in-game. Even so, I found myself getting stuck in to the crafting and gathering. I definitely leveled those skills up far more than combat. 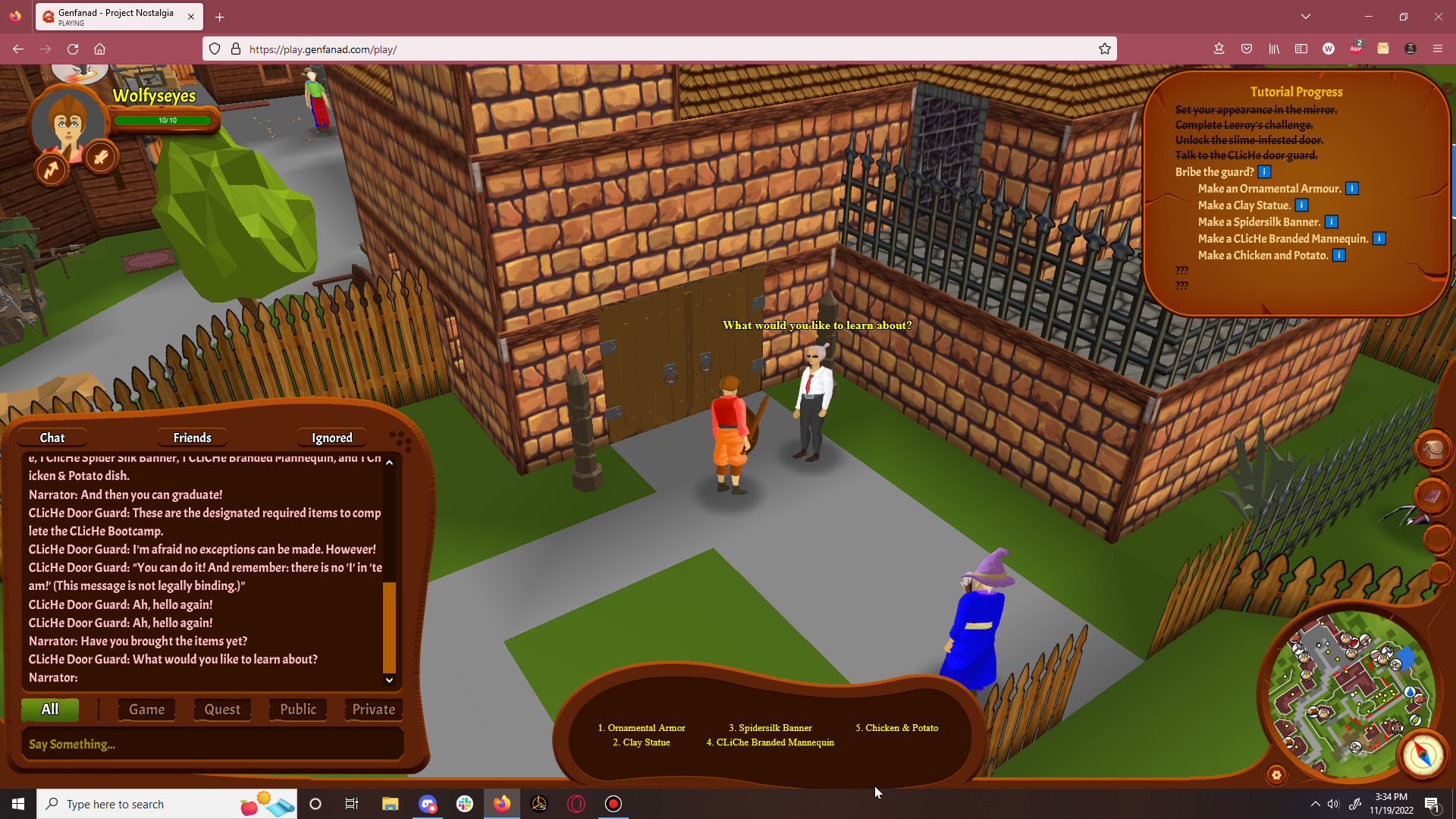 I pressed on, mucking through the tutorials, the systems, and the gameplay interactions until I got to the point where I had to fight spiders for a specific crafting item. In order for me to progress in the tutorial town, I had to make a selection of several items for a door guard, one of which requiring spider silk. I felt reasonably confident in my stats and my equipment, so I decided to take the delve. This was a big mistake, as I was eventually taken out.

As one might expect – and as I experienced before with at least one or two deaths before now – dying drops your stuff except for the weapons you have equipped, meaning I had to run back to the pile of crap that took up a tile. The problem with the spiders, however, is that they’re the first kind of enemy that aggros you instead of the other way around… and I happened to die right at a tile where spiders spawned. Repeated attempts to get my stuff, either through kiting or through praying to the RNG gods, didn’t work, leading me to die over and over and over again. I was quite literally soft-locked from picking up my stuff, and was facing the prospect of having to craft my gear once again.

I closed the browser and moved on. 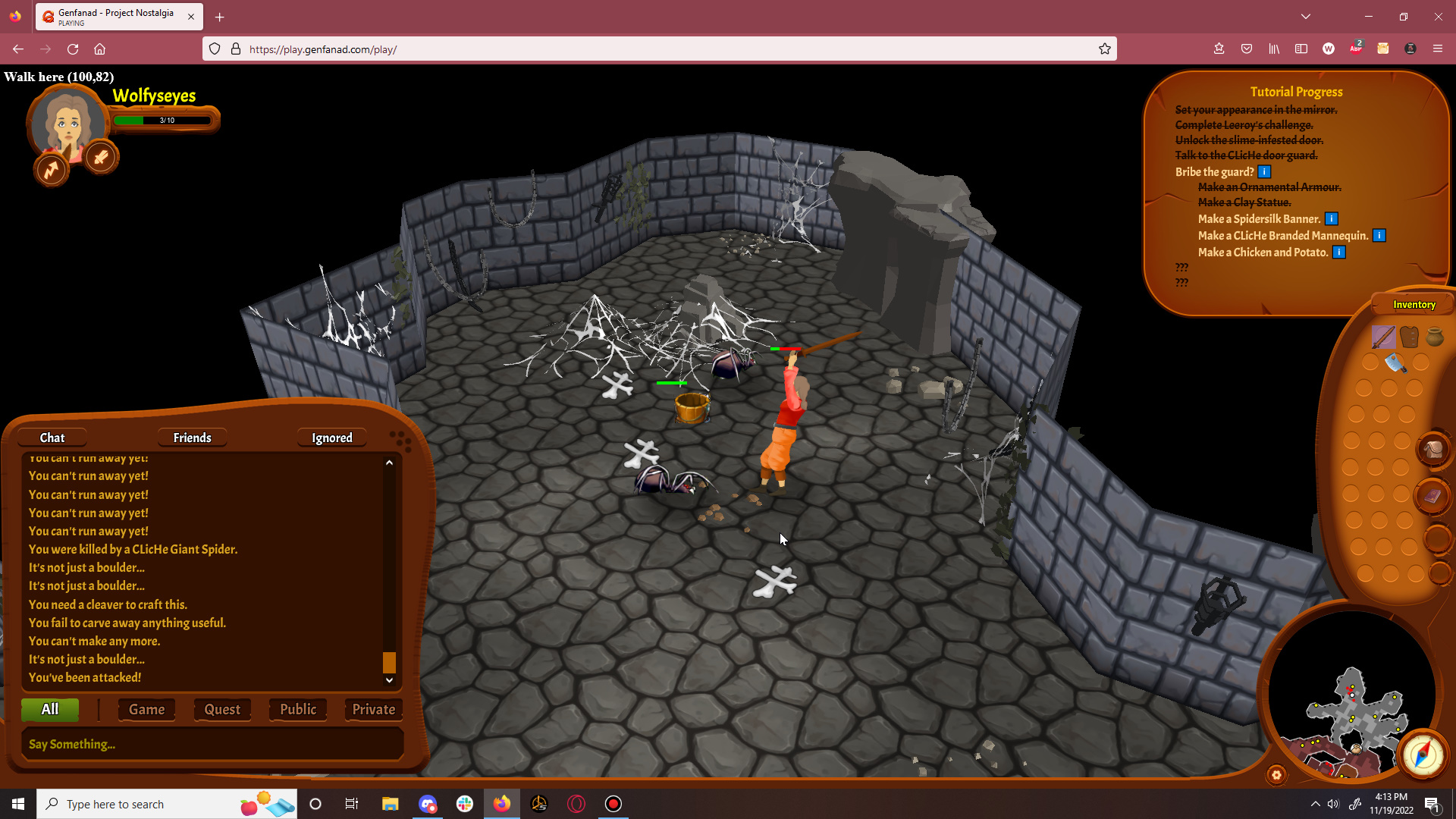 Now for that stated introspection. I learned during one of the many spider deaths that I could click somewhere – anywhere – out of the tiles I was fighting on and run away. Furthermore, eventually I could break the aggro leash. However, that simply made me near-dead, meaning on top of having to re-craft my kit, I was also going to have to re-craft food items to heal up. And sure, I could have very easily re-crafted all I had dropped. But I was too frustrated with how this all played out owing to how the game works that I just gave up.

Furthermore, if I really wanted a classic MMORPG experience, there just felt like so many better choices out there. I could get back into Albion Online. Old School RuneScape is a thing. Or if I wanted to be contrarian against that title, Project Gorgon references the old while still being new. And it’s actually funny to boot. Basically, I’m not convinced the world needs Genfanad. More power to the devs in building it up and those who enjoy it, but my brief time suggested to me me that it’s superfluous at worst and misguided in its nostalgia at best.

I’m sorry to have to end this month on that down note, genuinely, but I promise you that next month’s columns are going to be much, much better because I’m going into a game I am actively and repeatedly enjoying: Guild Wars 2. Last week’s polling showed that I should stick with my Elementalist main, so that means this week’s poll is about where that main should go.

What content should I check out in Guild Wars 2? 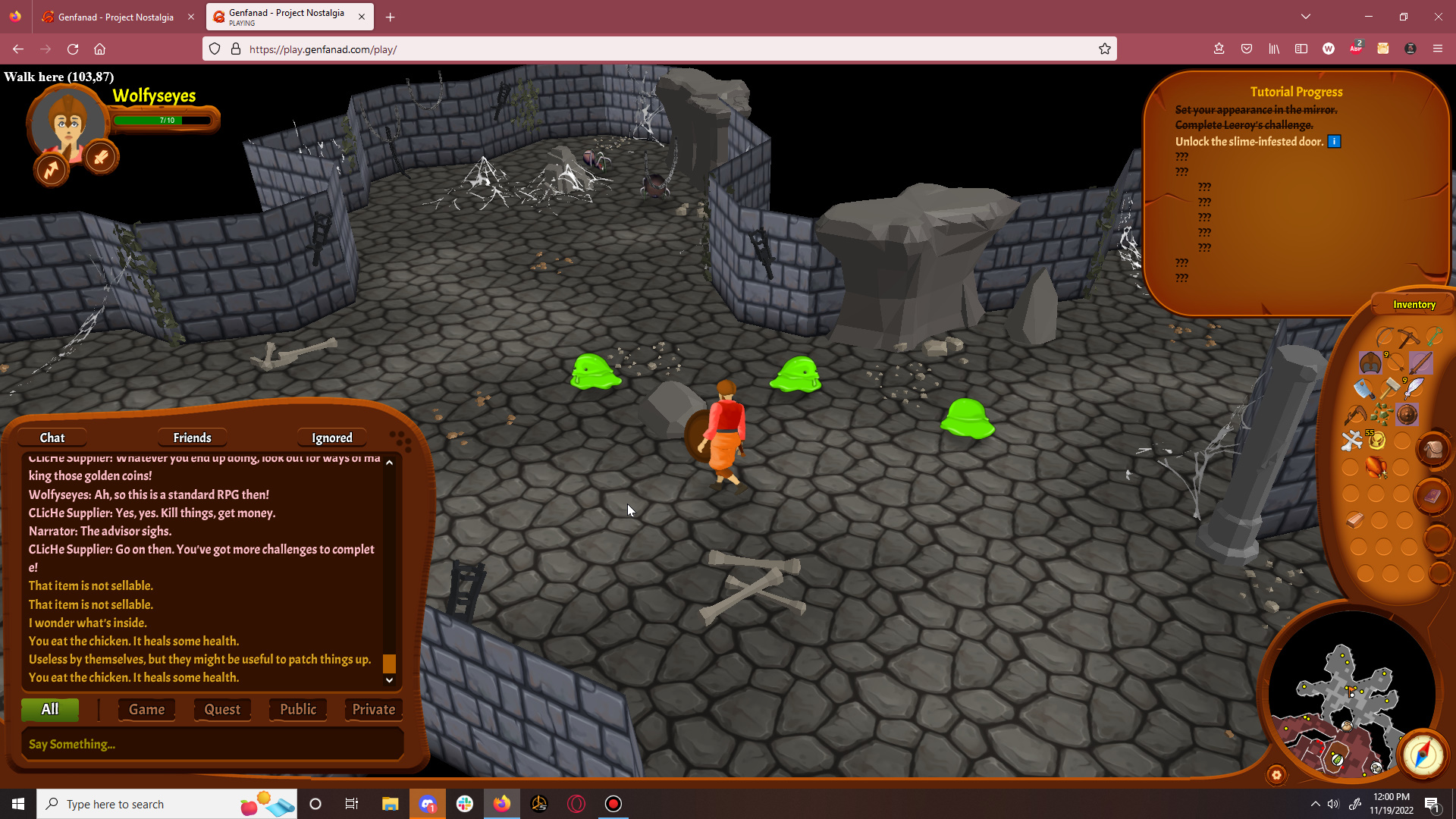