ArcheAge is preparing another fresh start server for players hungry to try the game out without baggage. The server’s set to go live in two weeks on December 15th.

“The Fresh Start server launch kicks off with a series of celebration events, offering their own special in-game rewards, including an Ally’s Wing selection box (awarded when creating a new character on the server), and the exclusive ‘Striker’ Battle Pet,” Kakao says. “Anyone who enters the new Fresh Start server can participate in global challenges set by XLGAMES. During the first 100 hours of the server going live, the average gear score of the top 20 players shall determine which country triumphs. Each new server player based in the winning country will receive event rewards, and the top 20 players will also be awarded a large credit payout. This event will take place in Korea, Asia, North America and EU servers. A PvP event will also pit countries against each other.” 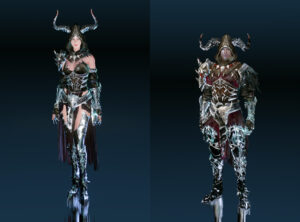 In anticipation of the new server, Kakao has granted us sets of keys for the Dark Shaman Raiment Outfit in ArcheAge and ArcheAge Unchained. This post is for regular flavor ArcheAge; if you’re looking for the ArcheAge Unchained giveaway, you’ll want to head to this separate post. The giveaway should work for players in North America, Oceania, and Europe (excepting Russia). Click the Mo button below (and prove you’re not a robot) to grab one of these keys!

To redeem your code, create a Kakao account and login to login.playkakaogames.com; go to My Account overview; enter your key in the Redeem Code input box; and press Confirm.

Codes are valid now and expire on February 28th, 2023. Codes will work only for players in North America, Oceania, and Europe (excepting Russia). This outfit can be used in both ArcheAge and AcheAge Unchained, but you must apply the correct game code for each one, so make sure you’ve collected and applied the right key for the right game.

The Stream Team: A first look at Embers Adrift for the free weekend

Global Chat: Is Dragonflight living up to expectations?