Albion Online, recipient of our own Best PvP MMO award two years running, is expanding its horizons eastward with an Asian server launching on March 20th after a multiweek beta.

“The Albion East Server will have a closed beta before the official launch, lasting from February 20 – March 12, 2023,” Sandbox Interactive says it in announcement this morning. “The beta will include its own short Guild Season: Compete with other guilds and players for unique rewards, including new custom guild logos for the top 5 guilds, permanent statues in the open world for the top 3 guilds, and personal furniture items for ranking high enough in PvE Fame, Gathering Fame, or total Silver earned. Beta Guild Season rewards will persist after the full server launch on March 20, 2023.”

“Along with offering a new start in the world of Albion, the new server will offer much faster connection speeds and optimized event times for players throughout the region.”

Do note this is still a free-to-play MMO with an optional (but fairly important) subscription, and Sandbox Interactive is running a massive founder pack sale for this launch, with four tiers spanning around $30 to $200. (Each includes premium time for what we assume is just one character as subs are per character in Albion.) SBI does say that players can buy the founder packs and use them on the western server too, and everyone can play on both with a single account. In fact, there won’t be any transfers to this server, meaning it’ll be a completely clean shard for everyone – as long as you’re willing to deal with an Asia-centric maintenance and event schedule. 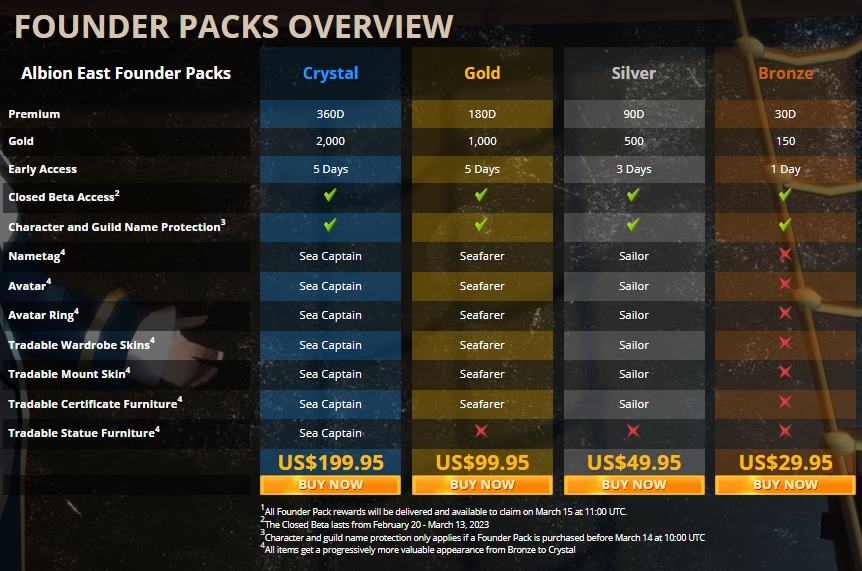