I knew there was a reason I wasn’t looking forward to this one.

END_OF_DOCUMENT_TOKEN_TO_BE_REPLACED
I’ve dipped my toes into this piranha pool before. I first played EVE Online during Apocrypha, and came back to the game a while later when it went free-to-play. Now, I’m back in and already I’ve made a terrible mistake, and for a little while there, I wasn’t sure how to correct course. 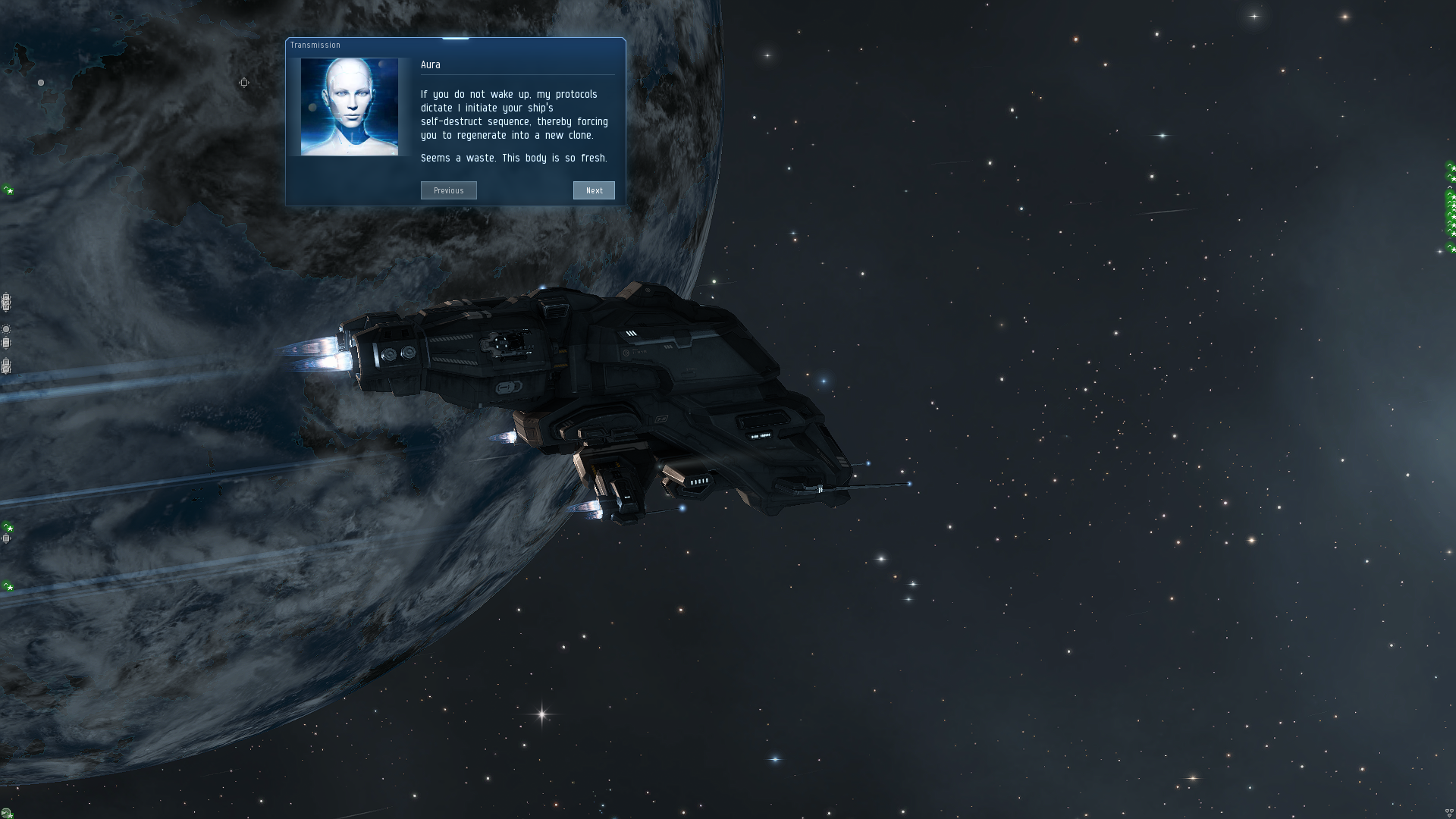 My return flight went well enough, with a very guided tutorial that got me in to the basics of the game. I have to say that this new user experience is a lot better at layering on the basic systems of how piloting a ship in EVE works, though it also does teach you to orbit targets to engage — something that, as I understand, is bad practice. I’m unsure of a good alternative, frankly. As far as I was shown, you click to move in this game. I despise click to move in a 2-D plane, so doing so in 3-D is a fresh form of hell.

Also, the AI that guides you along is just a smug jerk.

That said, I followed through, got some ISK, and even was able to competently fly some missions on my own. In fact, things were looking up in terms of basic confidence level. It was on my second ever mission, though, that it got bad. 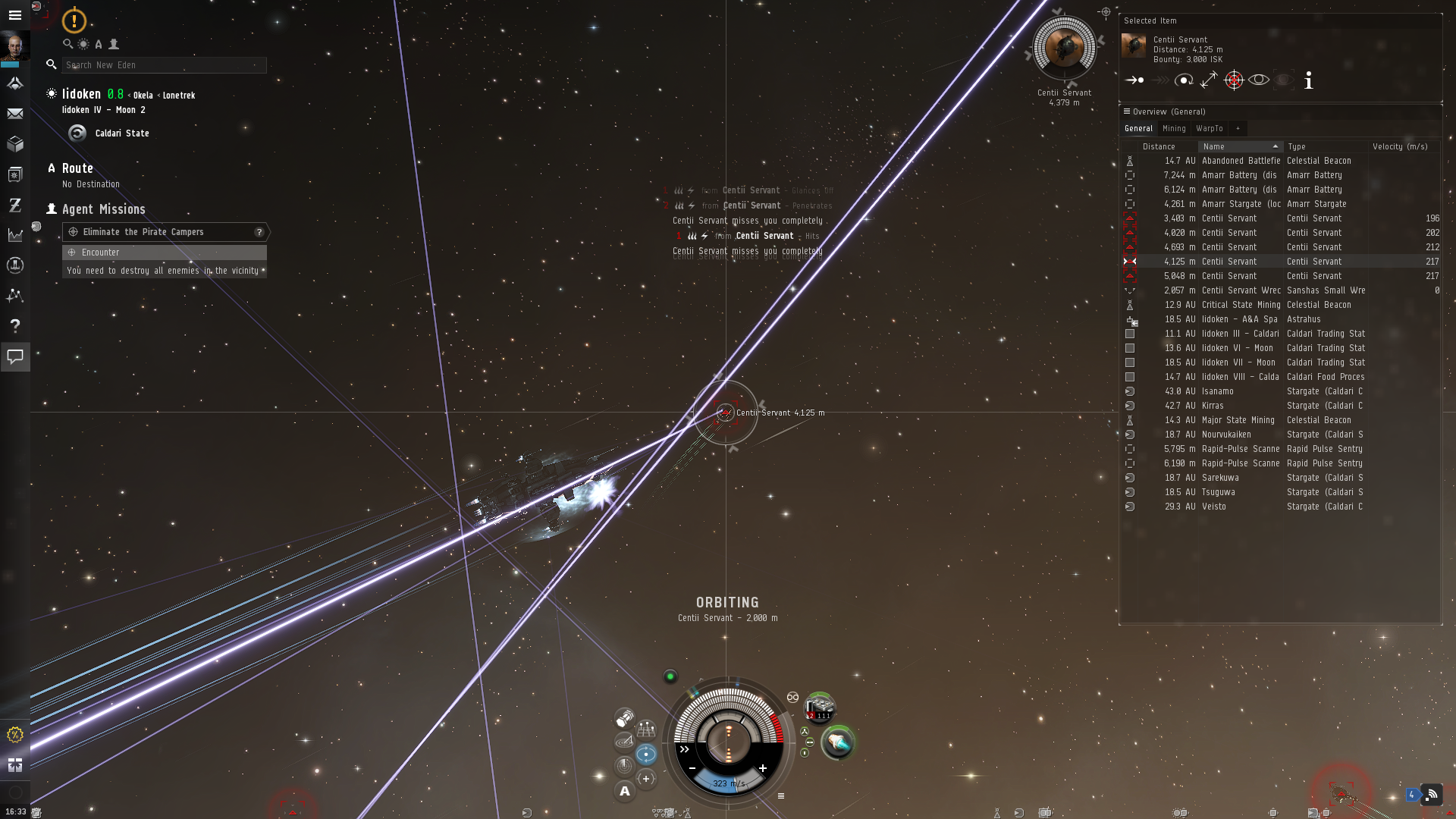 The objective seemed clear enough like other missions: warp to an area, take out some enemies, and head back to my Agent in order to rake in the reward. Warping to the location I had to go to, however, aimed me at a couple of acceleration gates. I’m not unfamiliar with how these things work, but it wasn’t immediately clear which of the two gates I should choose. So, on a 50/50 shot, I chose one. And I chose poorly.

Almost immediately, I was beset by a couple of enemies who made quick work of my doofy little Ibis. As good as the tutorial was, it didn’t really put me into a position where I had to figure out how to escape danger. The instructions I had received were more about engaging, not disengaging. So, without any sort of real way of knowing how to get away, I was reduced to a simple little pod. 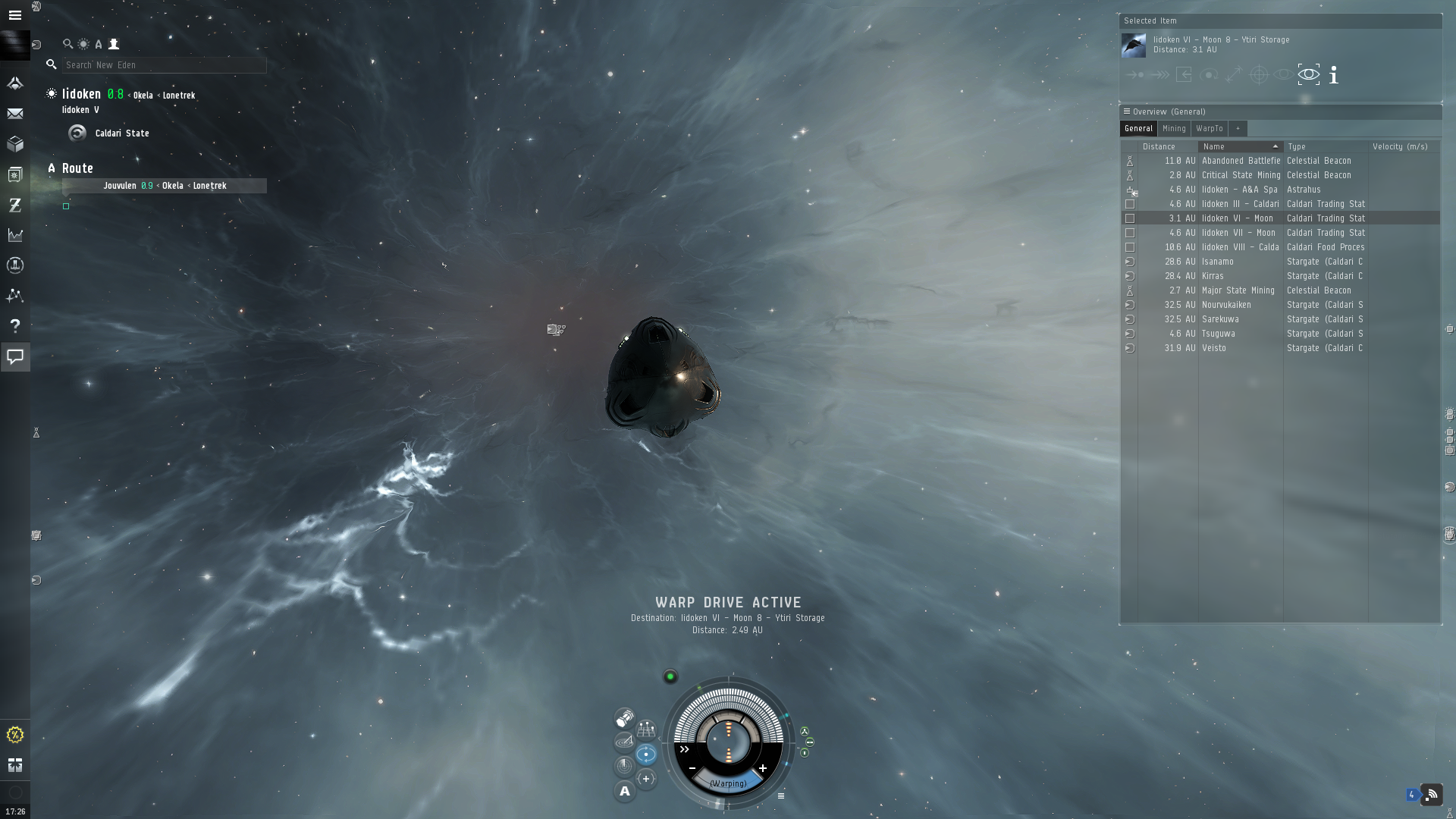 It was at this point that I stopped to get my bearings and assess what went wrong. After all, this game is very much about getting back up after being knocked down, right? It was then that I noticed, in a corner of my screen that I don’t really look at, I saw a UI element that told me which acceleration gate to use. Strike one.

With that knowledge, I decided to head back to the station I came from and see if I could recover my exploded ship. For some insane reason, I had thought that the starter ship was already insured. I know about insurance. I’m keenly aware that insuring your ship is the first thing that should be done. I know that flying anything anywhere always carries the risk of having it lost. But this time, for reasons that I can only explain as part assumption and part stupidity, I didn’t actively check if my starter ship was insured.

As far as I could tell, I wasn’t. I was, presumably, left without a ship. Strike two.

Alright then, I think to myself. I’ll just repurchase another Ibis. They appear to be cheap, and I had made a whole big chunk of ISK from tutorials, a mission or two, and from refining scrap metal and selling the resultant item. Easy. I paid close attention to the fact that the Ibis I purchased was two jumps away, so I elected to head out in my little pod and make way.

…except for some reason, I wasn’t allowed to make way. The window where my ship was located even had a “Set Destination” button on it, but no destination appeared to my autopilot or to my navigation overview. I was utterly and completely lost, puttering around outside of a station in a pod, pushing buttons to see if I could make things happen. And I couldn’t. 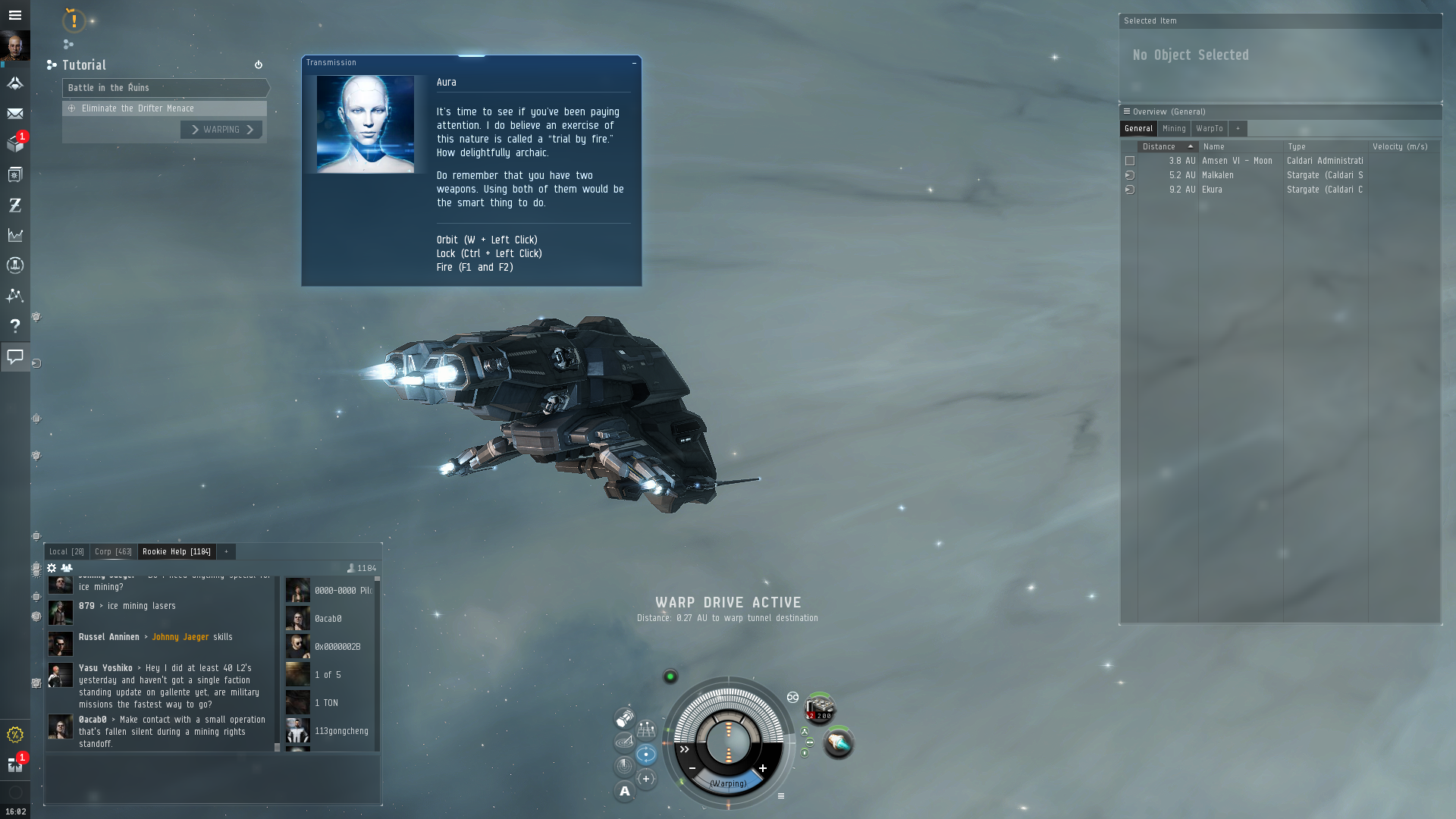 I, effectively, engineered my own demise here, and while I admit it was my own dumb fault a lot of the time, I also feel this just illustrates the relationship I have with EVE Online in general. There’s this sense of a force that repulses me from the game. Something astrological or maybe even aetheric that tells me to keep away. A polar opposite that ensures I’m unable to connect with the game. This could very well be my shortest CMA column yet. But the easy thing to do is quit, and I’m going to give it another shot.

A moment away from the frustration did get me to realize how to get to an Ibis, so I’m back in business once more. But before we continue on, there is one poll question that came to mind as I stumbled my way along. By the end of the tutorial, I was guided towards several career path NPCs, but I also have to admit that more time doing missions might be more prudent. On top of that, there was the old classic Cash for Capsuleers in-game email that I remember from my first ever flight in New Eden. So I suppose that’s the poll for this week. I recognize I’m effectively asking a similar question as last time, but clearly I need the guidance.

Which direction should I follow in order to progress? 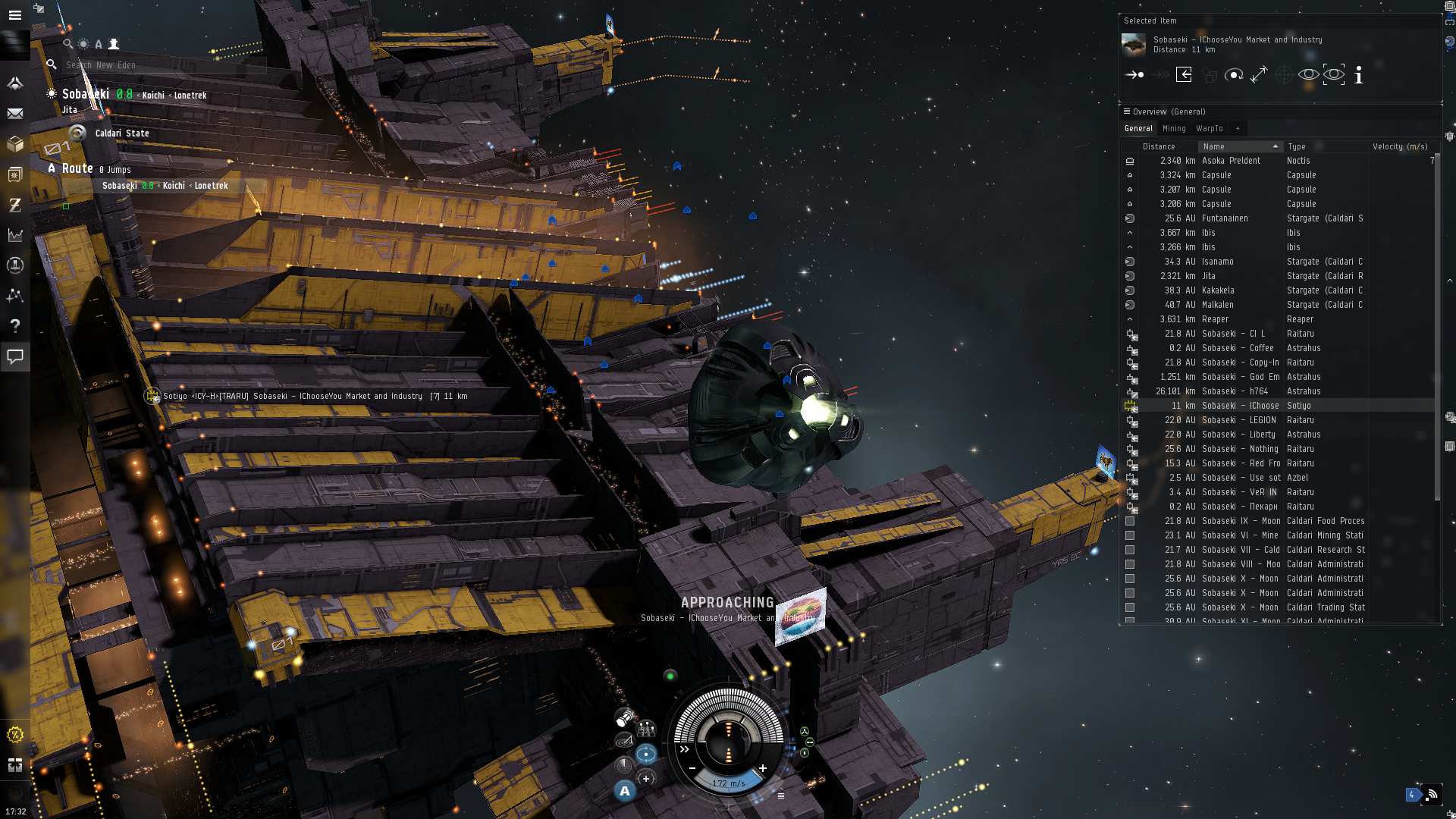 Polling wraps at the usual time of 1:00 p.m. EDT this coming Friday, June 12th. In the meantime, I just… need to step away from this one for a while. Try to cool down and refocus.