People around the globe are becoming less and less amused with the messes created in their neighborhoods by Niantic’s Pokemon Go app.

The AP reports that the mayor of Bressolles, France, has issued demands to Niantic that it remove unauthorized Pokemon — so, all of them — from the village, citing the potential for danger to pedestrians and drivers as well as for “dangerous addiction” among young people (though there have apparently been no incidents there yet). Regardless of the recorded injury, however, the mayor is displeased with Niantic’s treating of the “entire planet as its playground” and says the settlement of virtual Pokemon is “anarchical” when done without permission.

Go ahead and look up Bressolles; people are already having fun with it. 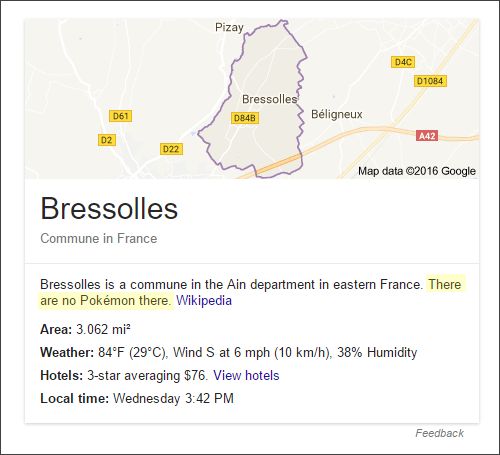 Meanwhile, up in Toronto, Canada, a comedian who leaped onto subway tracks for a Pokemon Go video has been charged with “unauthorized access” and fined $425. Maybe don’t do that.

Chronicles of Elyria backers have now hired a lawyer to file...

The Daily Grind: Have you ever visited a memorial in an...