Previously on Lawful Neutral, we talked about currency and how video game companies try very hard to not be classified as a currency because of the regulatory overhead it creates when a company is a money services business (MSB). Being a MSB means that they are subject to the regulatory requirements of the Banking Secrecy Act (BSA), also known as the Anti Money Laundering Act. Ultimately, game developers don’t want to deal with the operational and regulatory overhead that they would need to maintain as part of the BSA. There are personnel, investigation, and reporting requirements that would really eat into profits.

But it’s more than that: Many video game companies, whether they admit it or not, do profit from money laundering in their games. So while they might pay lip service to preventing it, the reality is their efforts aren’t much more than lip service.

That turn-a-blind-eye mentality, coupled with increased security in traditional money laundering situations, has very likely led to a dramatic increase in money laundering in video games, especially in MMOs and online games.

What is money laundering?

It’s always best to establish a baseline of what exactly we are talking about. Here’s Wikipedia’s definition: “Money Laundering is the illegal process of concealing the origins or money obtained illegally by passing it through a complex sequence of banking transfers or commercial transactions.” In short, you take money that you acquired illegally or as the result of illegal activity, and then use it to do something nominally legal, such that to everyone else it looks like legitimate, legally obtained money. We most often hear about money laundering from organized crime, extortion, illegal gambling, things like that.

The type of money that circulated most often in online games is called “micro-laundering” – which just means laundering small amounts of money through a large number of transactions and geographic locations. Micro-laundering involves three steps:

Let’s adapt an example from a PCGamer article from early 2018: Baddie A obtains money illegally – maybe she steals a PayPal account with $1,000 in it. The first thing she needs to do is move the money somewhere to – as security researcher Jean-Loup Richet puts it – make things “look fuzzy.” This is our placement step from above. She can then transfer the money into an game currency, like gil in FFXIV, and then sell that gil, turning it back into legal currency in the layering step. In this case, she would buy gil and then turn around and immediately sell that gil again. When the money comes back to her, it’s “clean” – laundered – and not traceable to the $1,000 she originally stole. She has then integrated the cash back, making it look legitimate.

However, each stop that she takes to conceal the origins of the money comes with a cost, since as she moves the money through “exchangers,” converting the dollars into gil, and then the gil back into dollars, there’s a fee at each step. She won’t net the full $1,000 she originally stole as a result. But even at a 10% costs, she still netted $900. If she is especially paranoid, she can add as many additional steps as she wants, such as moving the money between different game currencies or purchasing cryptocurrency, before moving the money into her legitimate accounts. Each additional step costs more, but it also makes it even progressively harder for authorities to track the money.

So isn’t buying and selling in-game currency illegal? While this is a Lawful Neutral topic all on its own, you need to know that the answer is usually no. In the United States, buying and selling gold isn’t illegal in most cases as violating a game company’s Terms of Use or Terms of Service isn’t a crime. You could be sued for a breach of contract, but not for the act of buying/selling gold itself. So it’s legal to buy and sell in-game currency or items provided you don’t commit any other crimes in the act of buying and selling, even though it’s often a violation of the EULA/Terms of Use for the game.

In online video games, this is likely the most frequent way money laundered: by individuals or small groups of individuals moving (relatively) small amounts of money through games to legitimize them. Moving larger amounts of money through games becomes harder. As the PCGamer piece noted, $10,000 worth of WoW gold is an almost unfathomable amount of gold, and you’d have an exceptionally hard time transferring that back out into real, clean money in any short amount of time without someone noticing. Or so we assume. The lack of reporting and tracking of funds by game companies makes understanding the scope of the laundering hard to determine. 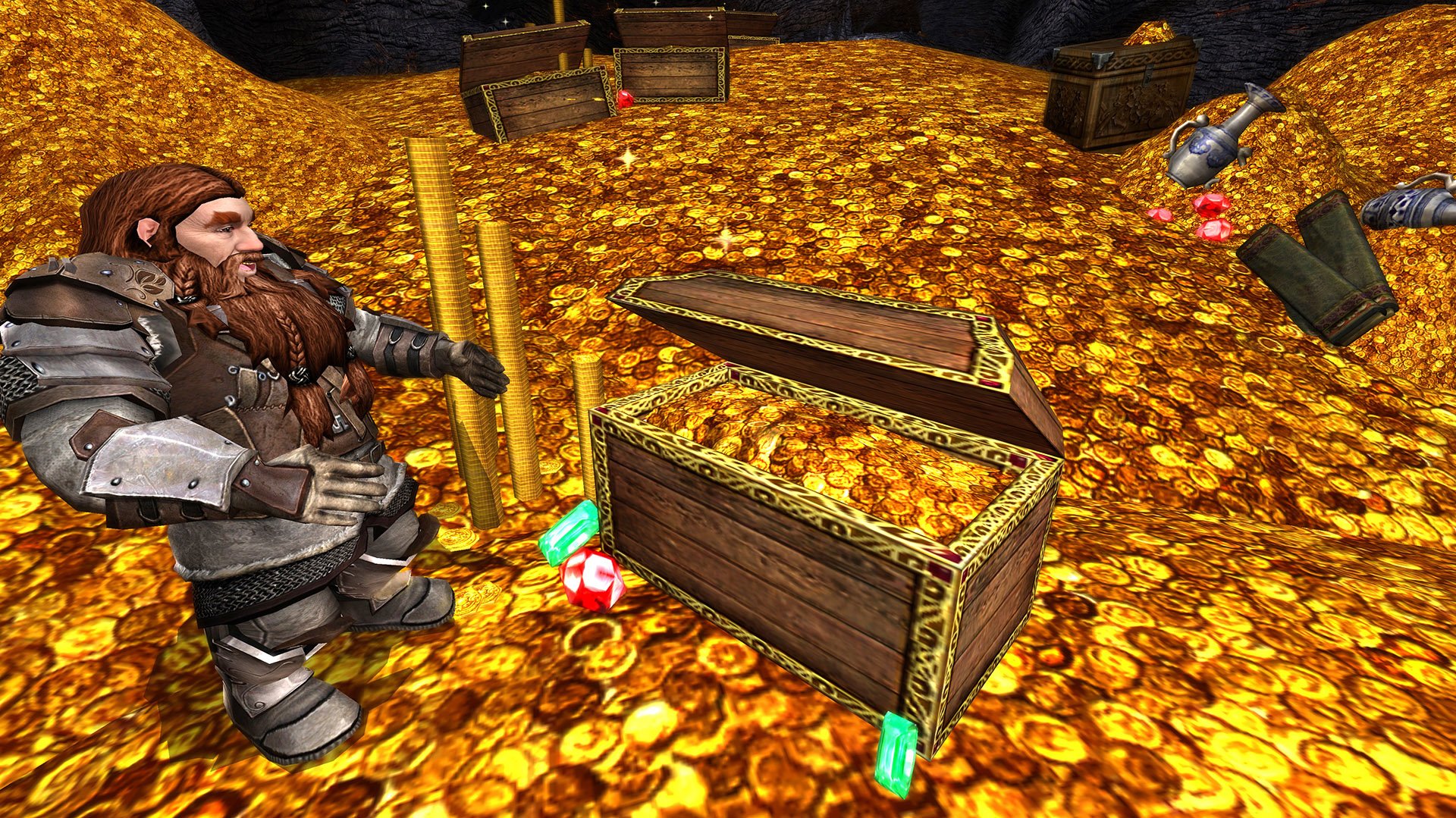 Recall that in the TV series Breaking Bad, the lead character used a car wash to launder his drug money into legitimate income (the irony, right?). We can apply this same this concept to video game company: A bad actor or group of bad actors could theoretically create or purchase a video game that allows for microtransactions. Free-to-play works best because it has fewer barriers to entry. The bad actors could then automate the creation of new dummy accounts that make microtransaction purchases using dirty money. Those “dirty” transactions exist alongside legitimate transactions as perfectly legal revenue. So that dirty money is then laundered into legitimate revenue for the company. Richet makes a point to say that this method is difficult to pull off since creating a crapware game that suddenly starts posting tons of revenue would look suspicious. He argues it would work better by purchasing an established, successful game with existing legitimate transactions so that the increase from the dirty transactions flies under the radar.

As complicated as this method is, if a bad actor is successful with it, it would be virtually impossible to prove without an insider or an in-depth IRS investigation. This is largely because, as we talked about in our previous column, virtual in-game currencies aren’t regulated because they are most often a “closed system,” meaning you can’t turn the virtual currency back into money without violating the terms of use for the game, which therefore frees the developer from any sort of regulatory requirements. Those regulatory requirements involve things like doing due diligence through staffing and reporting to ensure that money laundering isn’t taking place.

The net result of all this is that it’s almost laughably easy to use video games for these kinds of schemes. As it stands, the game du jour for small-scale money laundering is Fortnite. The process for Fortnite works like this: A baddie steals a credit card or paypal information. He then creates a Fortnite account, purchases a whole bunch of V-Bucks, and then sells the account on the dark web, the even darker-web, or auction websites. To provide the incentive for a user to purchase an account like this instead of just buying V-Bucks directly, the baddie has to offer the account as a discounted rate (it has to be cheaper than buying the bucks directly, or the buyer won’t take the risk). So the baddie might purchase $200 in V-Bucks, but he might sell it for $150 on eBay. That’s a 25% discount over direct purchase. In fact, schemes like these are one of the reasons games like WoW that offer a legitimate way to purchase gold still see a thriving third-party gold selling blackmarket on the side.

A slightly older example comes from 2008, when a gold-selling/money-laundering ring for WoW based out of South Korea managed to smuggle $38 million over 18 months from Korea to China. It’s not 100% clear how exactly everything went down, but it seems likely that by stealing WoW accounts and liquidating the gold and good ol’ gold farming, the group was selling the gold back to people to generate the revenue.

What are game developers doing to stop micro-laundering?

This is an easy answer: virtually nothing. Outside of systems like WoW‘s tokens to purchase game time/gold through the game company itself and weak clauses about violating terms of use, studios don’t really have an added incentive to do anything about it. In fact, it’s just the opposite: They can often profit from it. The Independent actually calls out Epic Games for lack of a response,

“…security experts say the firm is not doing enough to prevent illegal activity on its platform.

Games like Fortnite are still generating lots of revenue from V-Bucks, and whether it’s legal or illegal is of little consequence to them since they can’t be held responsible. Steam’s third-party markets take this hands-off “not my problem” approach to a whole new level, all while generating a non-zero amount of their income from micro-laundering activities. The industry is actively fighting against its game coin being classified as a Convertible Virtual Currency because it would then be legally required to care about the money laundering happening on these game services, and that would mean less revenue.

Most game companies can feel free to sit pretty in their amoral stance of “its a violation of our terms of use!” while still actively benefiting from that violation. They don’t have much incentive, or any at all, to do more than pay lip service to stopping micro-laundering.

What can you do?

Cybersecurity company Arctic Wolf notes that laundering money in video games is effective largely because we make it so easy to hack our bank accounts or in general steal our money. Always use strong passwords, app-based 2-factor authentication, and other security best practices. And of course, don’t buy things like gold from third parties. You have no way of knowing whether you purchase is actually helping someone else get away with stealing money.