Who doesn’t remember the thrill of sitting around way back in 2004, conferring with guildies and allies to figure out which World of Warcraft server to start on? I certainly do, and I also remember that my guild chose so poorly that we ultimately took the free transfer bus off it later due to extreme overcrowding and queues because everyone else chose it too. You win some, you lose some.

Hopefully WoW Classic will be a winner for you: Blizzard announced server names and ruleset types for all of the launch realms as well as confirmed that that starting on Tuesday, active subbers can reserve three character names for Classic. Here’s the North American list: 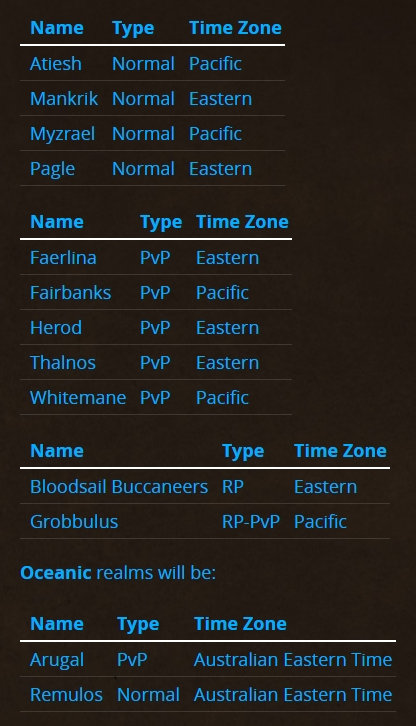 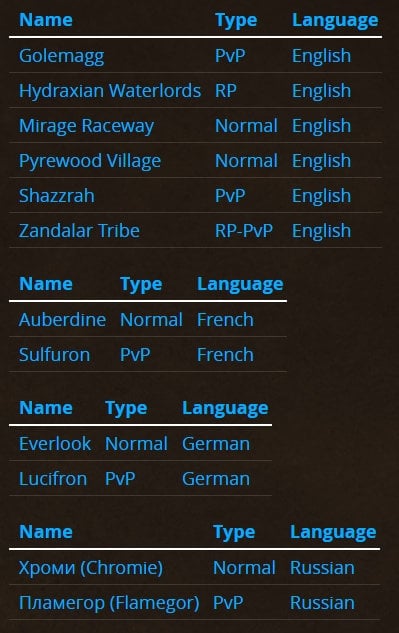 Is that gonna be enough? Somehow, we seriously doubt it.

“Relative realm population will be visible in-game to help in choosing a realm so you will see Low, Medium, or High in the realm selection screen,” the studio writes. “If there are high numbers of players congregating on individual realms during name reservation and character creation, we will post warnings about the potential for queues on those realms, giving you time to choose alternate realms. WoW Classic releases worldwide on August 26, 2019 6:00 PM [PDT].”

So they actually do have language-specific servers?!? Thought they said at some point to only provide international – i.e. English – servers for the Euro peeps, but maybe I misunderstood.

Hm, makes server choice even more tricky for me …

They were, and then tons complained, so they changed it.

They are going to need a lot more servers .

Even with layering, I imagine Blizzard has a cap per server. I expect new servers to open dynamically. This is how it happened historically and it’s even easier for them now due to the layer buffer and server spin up is basically virtual anyway.

Well it’s worth remembering that server technology has evolved dramatically since Vanilla. So has the actual WoW software (both server and client). Even though WoW Classic looks and feels pretty much exactly like Vanilla, it’s built using Retail’s tech. This should mean a lot more players per server.

I’m sure they’ve also learned a lot since Vanilla’s launch. They’ll be monitoring closely and prepared to spin up more servers if needed.

Good to know I was going to leave it for a week or two after the 27th but I might risk it after reading that . Hopefully there wont be too many problems or too much of a wait .

What time on tuesday will you be able to log in and reserve a name?

As per main forum:
“August 12, 2019 4:00 PM . Players with an active subscription or game time on their World of Warcraft account will be able to create up to three characters per WoW account and have the name(s) reserved before WoW Classic releases worldwide on”

Has there been any confirmation regarding the RP ruleset and enforcement? I’m not a roleplaying purist in any way, shape or form, but i was curious how stringent (if at all) the rules will be.

If it’s authentic to the classic Vanilla experience, there will be no enforcement at all.

Probably no real enforcement unless RPers are getting harassed.

Likely just a wider spectrum of situational enforcement from reporting due to the rule set including RP rules.

There’s no way that’s going to be enough servers, but I understand the intent. After the initial wave, populations are going to drop pretty dramatically like any game launch. You don’t want a playerbase that could fill one server spread across five.

Little bummed to see no RP-PVP for east coast, since that’s what I was leaning toward if i decided to jump in, as someone who never played WoW except for a few days during the panda expansion.

Judging by the stress test that should be more then enough servers. Even if 10x the amount of people show up for the launch then the stress test. There will be queues and there will be phasing for sure. They have already stated that

Servers can be added on demand. This is the usual launch strategy. They want to ensure existing servers fill.

Do the time zones represent where the servers are?
Specifically are the Eastern servers on the east coast.

I believe so. If it’s the case for the current retail version of the game, then it should be the same locations for Classic.

Not necessarily. Each of the four datacenters that host regular WoW’s servers now host realms representing each of America’s four time zones.

Source: WoWWiki’s list of US realms, sorted by datacenter https://wowwiki.fandom.com/wiki/US_realm_list_by_datacenter

It’ll be interesting to see how long it takes for the physical locations of each Classic realm to come out. For some players, finding the realm with the fastest connection pathway will be important.

Grobbulus… I like it!!! although, I might chicken out at the last second but i’m viewing it all as i’m rolling the dice on classic see if we get a win, figure, may as well go all in and roll on pvp too.

The queues will be glorious on those European PvP realms.