We’re probably preaching to the choir with this one, but did you know that there is still no proven link between video games and real-world violence? That’s not just a bunch of hardcore gamers saying that, by the way, but the American Psychological Association, which recently noted is “no connection” between the two. Politicians and pundits have been beating on this old horse in the wake of the recent tragic mass shootings in Dayton and El Paso as well as several near-misses over the course of last week and weekend, and we covered how TV networks and retailers were balking at the optics of promoting graphically violent games. But it seems that fewer and fewer people are actually buying it when the science simply doesn’t back it up.

Villanova University psychology professor Patrick Markey (you’ll know that name) is quoted by CNBS as saying, if anything, games make the world more peaceful: “The research is not there to suggest that there is a link between violent video games and these horrific acts of violence. When we look at when people play video games, we actually see a dip in violent crimes… and we don’t see an uptick later on.”

We covered the uselessness of this manufactured moral panic last week: “We all know games aren’t the problem here, and so do the people condemning them. These desperate political gambits didn’t work 20 or 30 years ago, and they certainly won’t work now that gaming is a mainstream hobby and pastime for multiple generations far outnumbering their lower-tech forebears.”

The earth is flat I tell you, it’s flat.

A group of medical students decided to make scientific study on water. They mixed water and wine, water and vodka, water and beer and tested its effects. The conclusion was undeniable, water has an intoxicating effect – That is how Science works in 2019.

That was sarcasm… just so we’re clear.

I feel that this scapegoat is probably nearing the end of its lifespan soon. Who knows though, people always look for something to blame without looking at the real issues behind things. That and the world of politicians who spew the blame skews to be older.

The world is filled with people who grew up with video games and know this is nonsense but there are a lot of extremely old people in politics who didn’t grow up playing games and don’t understand them that can actually say this stuff with a straight face.

VR will likely be the next scapegoat — related to gaming, but different enough / scary enough to cause a whole new moral panic about the evils of … experiencing & enjoying things others don’t understand.

Yeah, you are probably right. Mainstream media hasn’t seen VR lately. They have been too busy marveling at Fortnite.

I’ve never thought about it this way, but wow. You’re probably right indeed, it just need VR to be a bit more mainstream, probably in the next 5 years (I mean, this is for some of those mass shooters to be found owning one of these “pesky” VR googles).

At this point a mass shooting is actually good publicity for gun manufacturers, very sad.

Basically by people who want to be protected from the crazies though rather than more crazies buying them to cause harm.

Gun sales themselves aren’t that scary to me.

Reminds me of an interview with a young man … “But why do you bring a knife to a discoteque?” .. “I am afraid to get stabbed”.

What Timeline is this? Some parody demension? 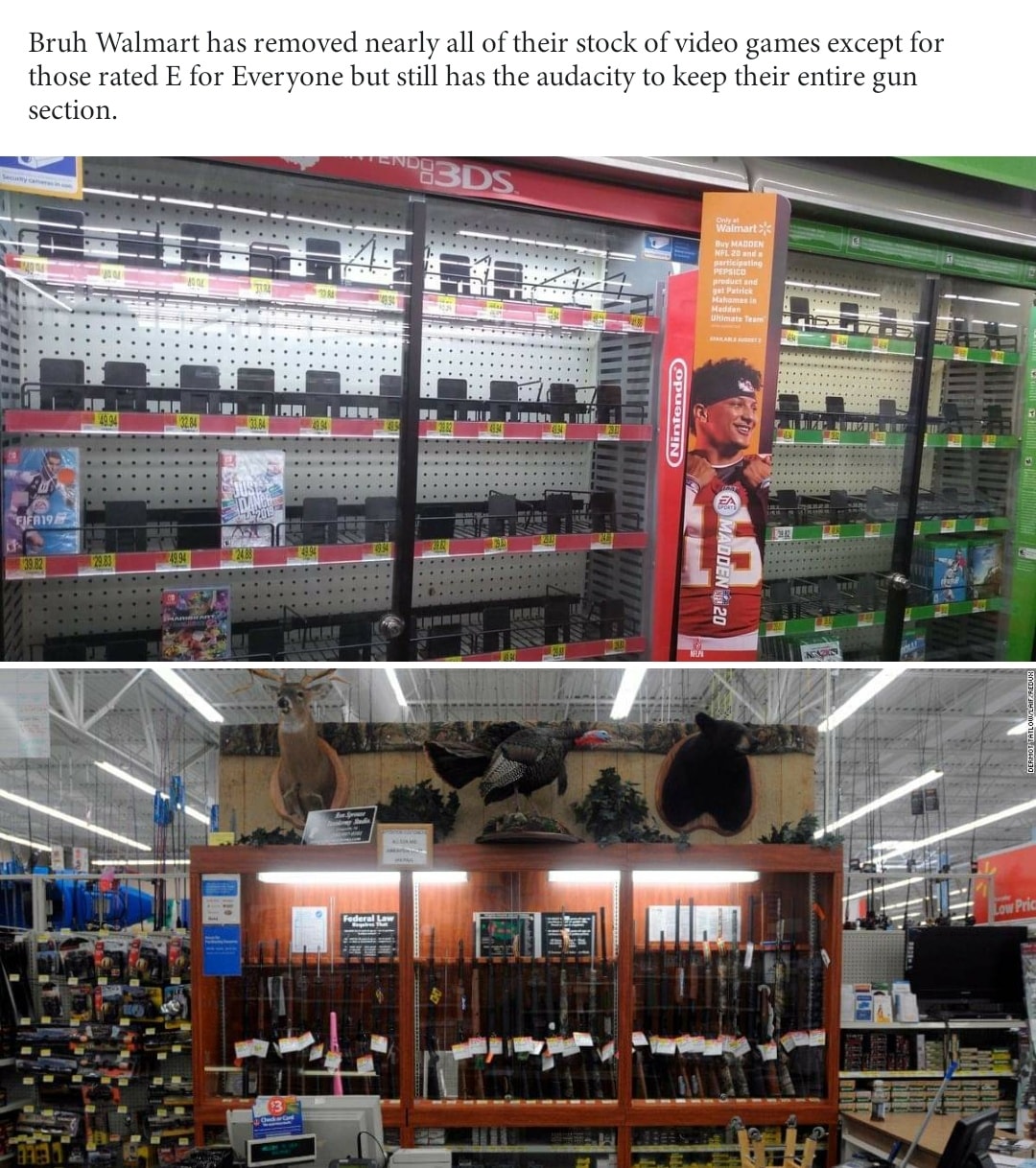 I think more destructive forces like explosives would be used often if people wanted to cause harm and didn’t have access to guns. I think it’s more about causing harm and killing and violence than the guns themselves and it’s very easy for people to look up how to make explosives online these days and people can even 3D print guns now too so it’s sort of difficult to take them away (and they will be able to continue to print more complex guns as the 3D printers become more complex).

I can’t (and wouldn’t) defend having personal assault rifles at all and don’t really care what gun laws get passed. I don’t care what they decide to do about guns, I could care less if they said nobody in the US could own them anymore, but if they did take them all away I don’t think that is going to suddenly stop those wanting to cause violent harm or make the harm they cause be less than it is now. Using explosives and fires etc could end up being much worse in the end.

If they couldn’t get ahold of assault rifles, that may actually help the situation because they’d use guns that cause much less damage in the same amount of time but wouldn’t turn to explosives instead since some kinds of guns were still there. I know this is a very hot issue and didn’t really want to get into it, I just wanted to explain my own thoughts on the matter :D I’d be fine if they had more strict laws but it’s hard for me to blame guns themselves.

I live in an area with some of the laxest gun laws in the country and where almost everybody owns guns, and most years we have zero gun homicides (yes, zero – though people use them in their suicides here, murder with guns and gun violence is very very rare). No permits are required here, everybody can carry concealed, it’s fairly rare to know people who don’t own guns here. So it’s hard for me to live in an area like that with pretty much no violent gun crimes and yet blame gun ownership for these situations. It’s definitely not video games though :P

And this will be promptly ignored by those in power as it doesn’t support the narrative they are pushing so that they can keep getting their blood money.

You do realize both sides are getting paid right? There is no right or wrong side of this argument. I could argue the merits of both sides. however the fact is you can’t just remove two centuries of guns without starting another civil war where millions would die. So in the end the gun lobby wins. As for the anti-gun lobby they have just as much blood on their hands because gun free zones don’t work.

Same can be applied to the politicians. They will ignore what works around the world, since they cannot make it an easy thing to blame and divide people upon, and instead promote extremes to keep us divided and voting for them without any consideration of alternatives.

Science! What madness is this?!

(sarcasm and disdain of politicians intensifies…)

Yeah! Who needs science when you can just have a knee jerk reaction about a sub-culture you don’t know anything about?

This is good to see even if we know this is true already. Barring those that waffle on this when politicians bring it up, like Walmart and ESPN did, the scapegoating of video games has had less effect every time they do this.

Video games can be a great release valve. After a day of work and if you like me have an annoying commute home, blasting some enemies away in a shooter, defeating groups of mobs in an MMO, and the like are very cathartic.

…you know, WoW by nature is a pretty violent game. And while this could be considered anecdotal, but after 14 years of playing it…I have no inclination to drive 900 miles to a Walmart Store to shoot up folks there for “reasons”. Which to me suggests something else is going on other than violent video games. Maybe instead, a toxic spewing environment that puts funny ideas into it’s patron’s heads in a jurisdiction that sells guns as if it where peanuts, might be something to consider more. Just saying.

Yep! I mean if violent video games really caused all this, we’d be in a world of hurt.

On the side, I think Warriors can still equip guns. They are just completely useless to them currently. :)

Maybe they can. I actually don’t know. The last time I rember them being useful was WotLK I think when they still had a separate ranged slot.

^. This so much about so many scapegoats on this topic. It’s almost like the problem is with people snapping, and us not dealing with that problem! Yeah, I’m taking it a step farther on this whole thing…

*Sighs* It’s really back to Mr. Goodkind, and the ‘Wizard’s First Rule’ on this. Sadly, there’s a lot of wishes and fears that feed this bad behavior of scapegoating. (Yes, for a moment there I wrote spacegoating. Poor space goats, they are not to blame either!)