This news will very likely elicit replies of “well, duh” from many, but now there are numbers from Superdata to back it up: Overall in-game spending is down over the last year, and the data analysis company believes shattered trust in game publisher microtransaction schemes is to blame.

According to Superdata, in-game spending on PC has remained fairly static while in-game spending on console has slowly declined over the past year. Additional content purchases failed to crest more than 8% of players in the past month for big-name titles like Call of Duty: Black Ops 4 and Fortnite, and 51% of gamers simply bought the game they wanted to play while outright avoiding add-on content.

Superdata contends that several factors are contributing to this spending shift, but ultimately believes that player sensitivity to monetization and an outright glut of in-game cash shops are the biggest reasons for the trend:

“In-game spending as we know it has reached a saturation point. Between loot boxes, battle passes, one-time booster packs and individual cosmetic purchases, there is no shortage of in-game monetization tactics. These strategies, however, are not enticing everyone to purchase additional content. Developers must seek out and identify the best approach for converting players to spenders or earning back player trust that was lost due to poorly implemented microtransaction models.” 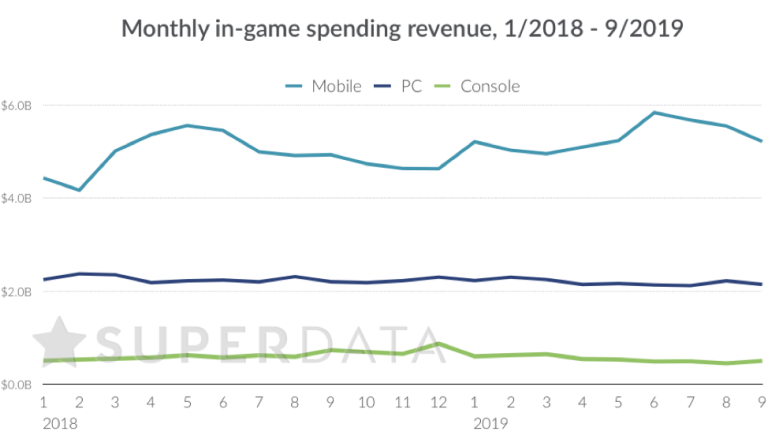 I’m seeing more people on mobile talking about being sick of bad lockbox rates and the cheesy mobile monetization in games these past months than ever before. I really thought that meant people were starting to wise up and spend much less, yet their rates look to still be all over the place and even looks to have spiked to a two year high 5 months ago.

I don’t know, I really very much have felt like people have been talking a lot more about not spending as much on mobile monetization trickery these past months, but the data doesn’t seem to really back that up a lot. There’s a slight decline but that’s only because it jumped up so high just before that and it’s going back down to “normal”.

And look at those mobile spending numbers in comparison to the rest, phew. The sad thing is that isn’t because of quality or anything. It’s because of pay-to-win and lockbox crap. As long as we mobile players keep spending that much money, they aren’t going to stop releasing games with that aggressive and predatory monetization.

I don’t know, I really very much have felt like people have been talking a lot more about not spending as much on mobile monetization trickery these past months, but the data doesn’t seem to really back that up a lot. There’s a slight decline but that’s only because it jumped up so high just before that and it’s going back down to “normal”.

Depends on which data you are looking at; the original article points to the fact a smaller percentage of players is actually spending money on microtransactions, and of those that do spend money, they are on average spending it in less games, and spending less in total despite the fact they do spend more on each individual game they still spend money on.

In other words, the per-player spending is falling enough to offset the increase in the player base. This is concerning for the publishers, as you need to reach more players in order to keep the same revenue.

(I love this situation, mind; if I could cause every single publisher that uses lockboxes to go bankrupt, I would be very tempted to do so despite the loss of games and jobs.)

The middle class has been successfully culled. We just don’t have anything meaningful left to give, these leeches have successfully bled us dry.

Or maybe, with the never-ending search for more profit, all the people ran out of money and those few who managed to absorb those profits have all the money and nearly never let go of it…so no more profit is to be had…

You mean developers have to put in the effort to make a good game that can sell itself on just the price box alone?

Greedy devs and publishers pushed their golden goose too far, every consumer down to the most unwise company shill has their breaking point.

Looking forward to the day when studios promote their lack of monetization beyond the box cost. (I can dream can’t I?)

Some already do. It’s part of the reason I love CD Projekt Red.

The guy in the middle looks like he is achieving fun through surprise mechanics.

I can’t wait to see his expression at the surprise ending!

Just charge a flat subscription and you spend less time worrying about and coming up with schemes to get money. Time that could be focused on improving the quality of the game beyond what it is.

…
How do I say this…
Listen I know coming out of a 10 year coma is a hard thing…but I have some really bad news to tell you about what has happened to gaming. You may want to sit down for this.

…so your surprised this is a thing? I think we’re the ones that need to wake up from our 10 year comas. Just saying.

What is a thing?

“Just charge a flat subscription and you spend less time worrying about and coming up with schemes to get money.”

…but hey, you want to be nickel and gouged in every game you play, go knock yourself out. /shrug

I would agree except for games that do wither and die. If you ever want proof look at all the titles that failed as subscription models and we’re resurrected as free to play. There have been few cases where free to play has not revived a flagging title.

Most MMO players do not want a recurring monthly fee and would rather pay more for ill thought out gambling schemes.

You can’t even really argue it because in title after title it works. It works for a few reasons.

1) Gambling is addictive
2) To make a MMO work devs tend to out in boring time sinks. It’s often more enjoyable to pay to avoid them.
3) MMOs without people loose their paying subs. So population is critical to keeping doors open. Having free players boosts people online
4) Many people hate subs because they feel obligated to play the game and will only sub to a singular title

Hopefully this is turning, but I think it will just lead to more predatory p2w schemes because as a whole we have proven over and over that as a market we like the ftp model.

Makes sense. Eventually there would be some form of fatigue for stuff like that. They’ll try to turn skins/etc. into a sort of ‘collect them all!’ thing, or ‘get them while you can, ’cause it’s going away soon!’ crap but eventually folks will get tired of it because it’s a never-ending money eater.

These monetization schemes worked when there was a finite amount of them. Like it’s one thing if you play one MMO game and in that game you spend some money. However if you’re playing multiple titles that release multiple times of a year all of them with their hand out looking for those upsells it just becomes a bit much after a while.

Yeah pretty much. It’s made be more picky about my purchases, and basically stick with a select few titles that I’ll occasionally buy MTXes for. Pretty much all of them through Steam since I can get some wallet funds off of selling the trading cards.

‘get them while you can, ’cause it’s going away soon!’

This kind of behavior is what soured me on exclusivity a long time ago. It wasn’t even game-related.

So, long story short, if a game does this, not only I won’t even look at whatever they are offering for a limited time only, it might prevent me from spending money on anything else in-game until and unless the publisher goes back and make the previously exclusive item available for all.