Multiplayer online TCG Deckbound is one of those rare gems that shines its brightest at an event like E3 rather than most of the other big conventions. The company’s pitches for a Bitcoin-esque digital card game are often met with confusion by gaming journalists. It’s an unusual presentation that could easily be misunderstood by your average gamer, especially if he or she can’t get the hands-on time.

Think of Deckbound less as a game than as a potential future platform: You can play it, but it seems more like a tool for building and exploring games, something probably more interesting to developers than casual gamers. In fact, Deckbound is using the same technology as Bitcoin to generate “cards,” though the data can translate into anything (like digital action figures), so you’re not actually using Bitcoin. Instead, Deckbound LLC is using block chaining technology, which allows players to legally own virtual items as opposed to leasing them as is the industry standard.

Deckbound has built both a traditional multiplayer online TCG/CCG called Deckbound Heroes and a singleplayer dungeon crawler called Deckbound Quest. Both use digital cards, but in unique ways. Those who haven’t purchased cards must use the Nomad system to rent them instead. What makes Deckbound Heroes feel more massive than, say, Hearthstone, is that cards level up and can be traded. They receive augments, a bit similar to the gem system in HEX (I didn’t see it, but the art of the cards is meant to change accordingly). More interesting is the way some cards have secret abilities that can be unlocked only through the community’s global efforts to level cards in each “genesis,” something akin to a physical card game set printing.

What this means is that you could level up your cards solo in one game, then jump into the online TCG with friends later. A card you’re borrowing may have been played by a pro who augmented it, so you decide to try it out in the dungeon crawler. During your singleplayer campaign, the card may level up and suddenly gain a new ability as the community reaches hidden milestones. It’s really “massive” in terms of tech and ideas, but I often found myself having to simplify the way the game is being advertised in order to understand it. 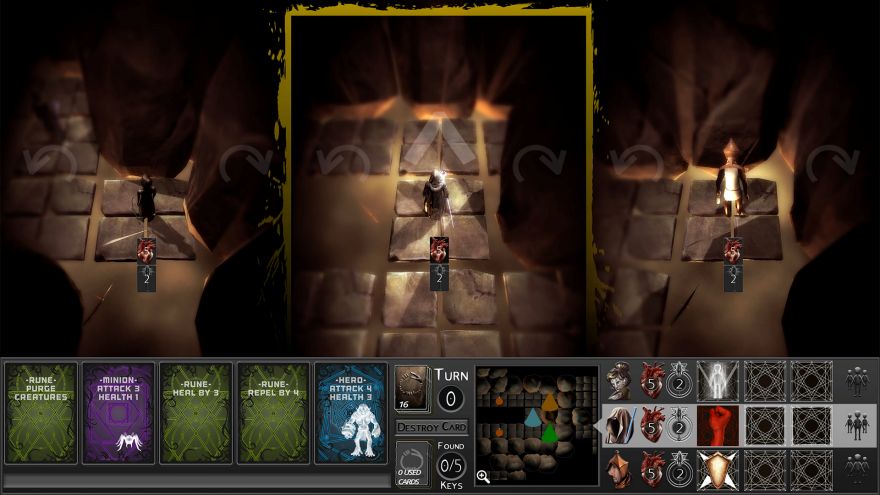 Since I got no hands-on time, I felt like I was looking more at a system for companies than for gamers. That could include MMOs and MMORPGs: Many of the team’s ideas seem suited to enhancing the current MMO market that’s constantly being bombarded by new titles asking players to grind continuously in the absence of socially sticky gameplay. For example, Deckbound cards level up and can be used in other games, with levels that carry over no matter what the genre. If your card is level 3 in a traditional online card game, but you take it with you to an adventure game, the card will be treated like a level 3 in that game as well. MMOs could apply that concept by attaching cards to weapons or armor that are “bound” to the player based on level, taking less durability or being less likely to drop on death in PvP.

It could allow for a kind of cross-game stickiness other companies are approaching by having their own launchers or RMT currencies, except this is more game-like and player-friendly. The gamer in me finds this system vastly more appealing, especially if it were applied to, say, a black costume cloak I could take with me to every new MMO that uses the system. Combined with global unlocks, it could prove beneficial for wealthier players to buy gear for their friends.

Then there’s the Nomad system: There’s a pool of rental cards available to everyone, and you’re allowed to use them for a time before they go back to the pool, or you can buy them, but if you don’t, the next person who uses them will keep the level-ups you generated. In MMO terms, it could make newbie equipment more appealing as hand-me-downs with history. You could also buy cards, put them in the Nomad pool, and sell them when they’re high enough. Translate that to MMO terms and the cards could be pets: Let someone else go out and train the wolf for you and then sell it on the auction house at a set level.

The system brings dynamics not often seen in MMOs, but its real strength would be in seeing how a game developer with some muscle might be able to flex the system for the masses.

Deckbound itself is angling for Steam Greenlight.