Massively OP’s not-so-serious end-of-the-year awards continue today with our blooper award for The best article joke that almost nobody got. And the winner is… 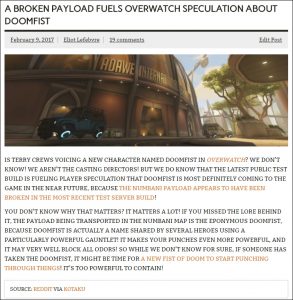 Sometimes our writers will ask me if they can do something wild in an article not expecting that I will say yes. And then I say yes because I am cheeky, and we just go for it. This article in all caps to honor the rumor that Terry Crews might play Doomfist in Overwatch was exactly that.

Nevertheless, this joke didn’t really play all that well for people who don’t know who Terry Crews is and were instead mildly disturbed that Eliot was shouting at them.

Sadly for all of us, Terry Crews isn’t Doomfist.

I still don’t know who Terry Crews is, but I get the joke now.

I had not even heard of him until the sexual harassment thing. Considering the media coverage on that though, I’m pretty sure everyone knows who he is now.

I don’t even remember that article, so I might’ve just never seen it or glossed over it even though I fully understand the reference.

So here’s a clip of a Left 4 Dead 2 mod featuring Terry Crews.

For what it’s worth, I now know who Terry Crews is. Your article sacrifice was not in vain.

……from the 2017 and all-time Best Movie Coming True Before Our Very Eyes.

I’ve got the perfect campaign slogan for him

I could also call that movie elitist.